POITOU, FRANCE – We have been in almost constant motion for the last 10 days or so.

It’s nice to be back at home… if only for a few days.

One of the pretensions of modern design is that things have to be different… modern… and new.

Progress, almost everyone believes, is undeniable and unarguably good.

What’s nice about being at home is that you don’t have to deal with so much of it.

At our hotel room in Paris, for example, it took a good five minutes just to turn on the hot water.

And in our hotel room in Porto, we spent several minutes trying to figure out how the A/C worked… and finally gave up.

The problem is not confined to hotel rooms. The clerks seem to have disappeared from airport check-in counters. Instead, you are confronted by a phalanx of computer terminals.

“Touch screen,” they tell us. But then begins a long process which inevitably ends badly. “Seek assistance” is the last screen.

Of course, it was assistance that we were seeking in the first place… and it would have been a lot easier to get it from a helpful clerk.

One of the problems with new technology is that it doesn’t work as advertised.

Another is that we’re out of step with it.

Thrill of the New

Standing on a street corner in Lisbon, we were about to hail a cab.

We watched one… two… then three… cabs go by.

“The Uber driver is having trouble finding us,” came the update.

We were standing on a busy street corner.

Eventually, we gave up on Uber and got in a cab.

When we were younger, the thrill of new things… the adventure of going to new places and trying new technology… the curiosity of flicking new switches and turning new knobs, just to see what would happen… was captivating.

But now, we can think of no greater pleasure than just to be able to stay home.

Back to the Future

The anticipated pleasure of the familiar is more alluring to us now than the surprise of the unknown.

Besides, from our experience, most new technology is a waste of time.

Most innovations are failures. And most great new ideas – especially in politics – are the same jackass panaceas that have been tried time and time again… always with regrets.

But for the next couple of days we’ll go back to the future, trying to connect the dots between technology, investment, and the economy of tomorrow.

And we’ll begin by exploring one of the hottest new “techie” investments, electric carmaker Tesla.

The question on the table: Will Tesla soon join the list?

A lot of people seem to think so. Short-sellers (investors betting Tesla’s stock will fall in price) are many. And the company is running out of cash.

On the other hand, Tesla CEO Elon Musk is a genius. If you want to go to Mars, and you’ve got enough money, he’s probably the person to talk to.

But if you don’t want to go to Mars, and you want to enjoy your life here on Earth more fully… it might be a good idea to stay away from the man.

For although money goes into the Musk organization, it rarely comes out.

And here, a little sidelong glance at capitalism is in order.

People put their savings into new projects hoping to get it back… and then some.

This last “then some” part is the important part. It is the measure of how well the project has succeeded. Press releases don’t matter. “Pro forma” earnings are a distraction. The celebrity status of the creator, too, is beside the point.

What really matters is capital in… and capital out. If the capital goes in… and doesn’t come out, it is lost. Investors are poorer. The world has gotten poorer too; it has less capital available for other projects… or consumption.

So far, Tesla has done nothing but destroy capital. The company’s market cap – the value of all its outstanding shares – is at $53 billion. That’s higher than Ford’s market cap, despite Ford making profits of $4.6 billion last year and Tesla losing $675 million.

And Tesla has almost as high a market cap as GM, which had more than $9 billion in earnings last year… and which sold 10 million vehicles versus Tesla’s 76,000. (For more, see today’s Market Insight below.)

And the losses are getting bigger; a record $619 million in capital disappeared in the last quarter alone.

We reach back into our memory. There, the image of John DeLorean sits sadly next to an automobile bearing his name.

Sleek, “futuristic,” it was once the newest, most innovative set of wheels on the market – the DMC-12. It was the car that featured in the Back to the Future movie trilogy.

Poor Mr. DeLorean launched his car company in 1975. Over the next years, he took in – and mostly destroyed – approximately $100 million.

Toward the end, he was so desperate for financing that he was an easy target for the feds’ entrapment program. Claiming to be investors, FBI agents coaxed him into talking about importing $24 million worth of cocaine into the U.S. and taped the conversation.

DeLorean beat the rap, but DMC went bankrupt in 1982.

Later, he faced challenges from investors and car buyers and was driven into personal bankruptcy, too. He lost his home in 2000. Then he lost his mind… suffering strokes, which killed him in 2005.

That was then. This is now. “When will Tesla’s stock promote finally implode?” asks Kupperman.

Answering his own question: “When people realize that it’s a cash incinerating vanity project for Elon Musk, at a time when newer, better products are coming to the market. That point is coming soon. Very soon.”

Today’s chart looks at the market cap – the value of all outstanding shares – of GM, Tesla, and Ford.

It then compares this to their earnings in 2016. 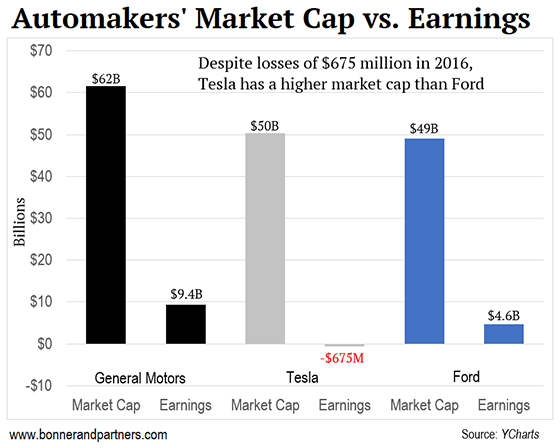 As you can see, Tesla has the second-highest market cap of all three automakers ($50 billion) despite having racked up losses of $675 million last year.

Americans Are Jumping Ship
There is a surprising trend playing out. The number of Americans renouncing their citizenship has been growing steadily since 2010. It all stems from this one federal tax law…

Millennials Are “Killing” These Businesses
Millennials are people in their twenties and early thirties. Recently, they became the largest generational group in America. And as consumers, they have been quietly putting these companies out of business.

In the mailbag, one reader thinks Bill has underestimated the threat of North Korea…

I’m usually amused, entertained, and educated by your articles and comments. However, in a recent article, there is one glowing mistake. You infer that North Korea can’t hurt the good ole USA. Maybe they can’t at this precise moment. But you better not bet the farm on that forever.

They love us so much that they are working tirelessly to come up with an atomic EMP device to knock out the very fragile power grid – such as it is. It would be like giving this country a massive heart attack, and the patient would “flat line.”

This could be the funniest thing you see today…

Palm Beach Confidential editor Teeka Tiwari has helped his readers see gains of up to 22,000% in the cryptocurrency market. But not everybody is impressed…

In this short video, Teeka shares some “mean tweets” people have sent him. Try not to smile when you see this. 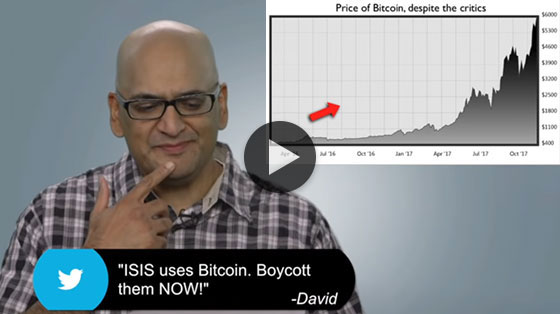