YOUGHAL, IRELAND – Back in Ireland for a few days, we take up an agreeable routine. We read and write in the morning. In the afternoon, we lay stone, closing the open gable ends of our old barn.

We’ve done stone masonry in France, Argentina, and now here. (There are no stones in the Maryland tidewater.) This is the best.

The stones here are more rectangular and easier to split. The only problem is that we’re working high up on a scaffold. And while the stones are easy to lay, it’s hard to get them up to where we’re working…

When the sun sets, we are worn out… and eager to return to our laptop.

So let’s look at yesterday’s trading…

The stock market began the day with a positive outlook. When we looked early in the morning, we saw green. But by noon, the Dow began selling off. It fell more than 400 points at one point.

Then, late in the day, investors found their inner dogs, cats, and other animal spirits, and barked up prices a bit. But the Dow still ended the day down 245 points.

That was bad news for the old-timers. It left the index below the technical levels – such as the 200-day moving average – causing them to sweat. This morning, stocks opened up… But the day ain’t over ’til it’s over.

What’s going on? Why so much volatility? What next?

People need an explanation. The media’s job is to give it to them – the simpler, the better.

So newscasters looked around for a cause. More trade barriers, said one. Violence in America, said another. Trump, said an analyst. The Fed, countered an economist.

None of these explanations are very challenging. In fact, all allow viewers to blame someone other than themselves, which is the goal of all modern media and political discussion.

The commentators might just as well have offered this explanation:

“Because you’ve been damned fools… spending too much… borrowing too much… and believing this preposterous claptrap we’ve been giving you for the last 30 years.”

Our job here at the Diary is not to blame anyone, but simply to try to understand what’s going on. Day after day, the media brings us more claptrap. We can hardly keep up!

But let us soldier on…

Among the most gaudy of the propositions put to us over the last 30 (or more) years is the idea that the motley collection of PhDs, bankers, and political hacks who make up the Federal Open Market Committee (FOMC) can do a better job of selecting an appropriate short-term interest rate than buyers and sellers of credit can do on their own.

As far as we know, the FOMC members do not walk on water. And none has ever performed a miracle.

And yet, they are believed to be able to divine the exact interest rate – to two decimal places – needed by the biggest economy in the world.

As a theoretical matter, nobody in his right mind would believe it. And every experiment in price-fixing (rather than letting prices be discovered in an open market) has ended in failure.

But that doesn’t seem to prevent anyone – including the president of the United States of America – from having an opinion and advising the Fed to “tighten up” or “loosen up,” depending on the circumstances.

Nobody objects to EZ money, so the Fed generally loosened up – allowing rates to stay too low for too long – (Mistake #1) over the last three decades.

Then, fearing that things were getting out of control, it tightened up – raising rates – (Mistake #2) to try to get back to normal.

To bring you up to date, the Fed is now making Mistake #2… but so timidly, you’d hardly notice.

Still, as rates rise, little by little, we can see the stock market preparing to break down… the economy rolling over… and the Fed governors looking through their files for notes on how to make Mistake #3 again.

Little-noticed yesterday was a report from the U.S. Treasury admitting that budget deficits are running wild. The feds are now borrowing at a rate of $1.6 trillion a year and forecasting a deficit of $1.3 trillion next year – about twice the deficit the Trump team inherited from the previous administration.

And here, you can connect the dots yourself. The deficit is going to get bigger, not smaller.

First, people are getting older… Budgets for Medicare, Medicaid, Social Security, and other “non-discretionary” items are rising. This spending is baked in the cake, so to speak. It is the result of open-ended entitlements granted by the feds.

Defense spending, too, is increasing. This is discretionary, but effectively out of congressional control, since the military/security/surveillance wing of the Deep State calls the shots.

Defending the nation could be very cheap, since we have no capable or motivated enemies; it could be done for, say, a quarter of the present $700 billion budget.

Archenemy Russia spends only $60 billion per year on defense, for example. Apparently, that’s enough to keep the Chinese or the Poles from invading.

But while national defense is cheap, an empire is expensive – about $1 trillion a year, all in.

What do we get for that money? Well, if any sparrow falls anywhere in the known universe, it will be our warriors who pushed it!

After nearly 10 years of extraordinary monetary policy – and 36 years of falling interest rates – the credit cycle seemed to turn in July 2016.

Since then, yields have been rising. The Fed is no longer buying up debt; it is selling. Interest rates have risen since July 2016, with mortgage rates now over 5%, and they’re likely to continue rising.

This rise in interest rates comes at a very inconvenient time – just as borrowing needs are exploding.

Mr. Trump’s tax cut did not perform as advertised… or at least, not yet. Instead of “paying for itself,” the nation’s finances are deteriorating… with soaring deficits.

And the bull market in stocks and the expansion in the economy are both in record territory.

Markets and economies move in cycles – up, then down. Even if conditions were otherwise perfect, we would still expect a downcycle.

Those are the dots we’re looking at. What do we make of them? Do you see what we see?

As Bill wrote above, the mainstream financial media is grappling for an explanation for the recent sell-off in U.S. stocks.

One possible explanation: Just about half of all publicly traded companies have beaten revenue estimates this quarter…

That’s the story of today’s chart, which maps the percentage of companies that beat revenue estimates in their quarterly earnings reports over the past two years: 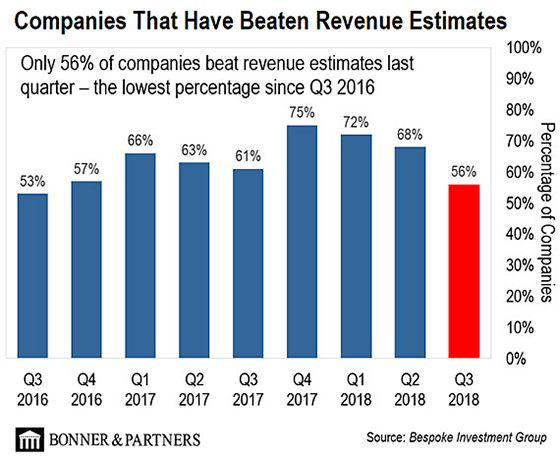 While there are many factors that affect a stock’s performance, this low percentage of revenue beats is one reason why U.S. stocks have fallen this month.

Wisconsin’s $4.1 Billion Boondoggle
In July 2017, the state of Wisconsin announced a $3 billion subsidy to help Taiwan-based electronics company Foxconn build a new manufacturing plant in the state. It was the largest government handout to a foreign company in American history. But more than a year on, the plan is falling apart. The subsidy is topping $4.1 billion, construction is running behind, and politicians are jumping ship…

An Update on the Doom Index
The Q3 data is in… So what is the Doom Index saying about America’s economy? Bonner & Partners’ head of research Joe Withrow gives us an update.

The First-Ever Digital Tax
In the UK, politicians announced the first-ever “digital tax” on technology companies like Facebook and Google. The plan is to levy a 2% tax on the revenue acquired from mining the data of UK citizens. There are just one or two problems…

A mixed bag today, including the dangers of technology, financial chicanery, and the Fed…

Back in 1980, while running an apartment construction business in Argentina, I bought a Texas Instruments PC with two 250KB floppy disks. I used it to manage customer payments and keep track of expenses. The computer cost $8,500! But it paid itself off in savings in about three months, simply through the automatic billing of compensations for late payments.

After six months of using it, I told my wife, “This is great, but when governments wise up and recruit graduates in their twenties to run the computers for them, we’ll be toast and finally enslaved in their never-ending desire for control.” It took some time, but almost 40 years later, I cannot be called a paranoid conspiracy theorist any more. Not on this issue, at least. Bill Bonner says I was right.

One thing that bothers me is stock buybacks. It’s financial engineering instead of improving margins. I think it skews the charts. There must be a way to flesh out if the earnings are really improving or not.

Another is the apparent slowdown in the big engine of China. Yes, the country has dubious record-keeping, etc., but it’s a big consumer, and when it does not consume, it affects everyone.

And another is the setting up of international dollar clearing systems as alternatives to our SWIFT, which we use to bully everyone around.

I think nationalism and protectionism have unintended consequences, causing serious problems for world trade in our near future. I am not that smart, but I can think. I wish everyone would. The old saying of, “We overcame this and that” might not hold water anymore. I think our standard of living might just fall unless the Fed and government find a way to kick that poor can further down the road. You can fool some of the people some of the time… But apparently, you can fool most of them with financial engineering most of the time.

Go back to the the gold standard, and get rid of the Fed.

You wrote: “America’s central bank has been conniving to falsify the markets – and shift wealth to the financial elite – for the last three decades.” Why would anyone expect otherwise? Like corporations generally, the Fed serves the interests of its stockholders to the greatest extent possible. As long as a corporation doesn’t break the law – or doesn’t break laws that are enforced – it can do as its board of directors and the holders of the majority of its stock desire.

Doom!? What’s wrong with you all!? I’m a believer in the Lord Jesus Christ! The future is as bright as the promises of God.

A new technology will hit the mainstream starting November 14…

And when it arrives, it will change every aspect of our lives; from the cars we drive… to the doctors we see… and even the way we work.

Even if you never invest a dollar in this tech, get the full story so you’re not caught off guard. Go right here. 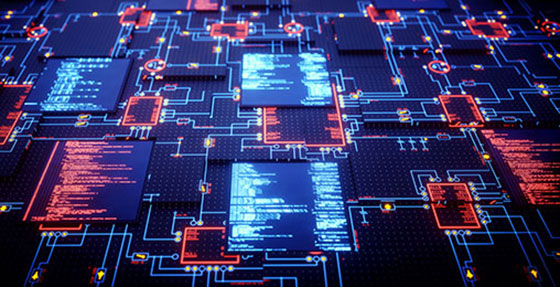