POITOU, FRANCE – The last days of summer are dwindling down… to a precious few. It is the best time of year here in France.

The sun has cooled. The days are shorter; the nights are still and clear. The leaves turn yellow and drift to the ground, a few at first… and then, many. Stirred to life by the occasional breeze, they gather in corners and cover the drains.

And over everything hangs an air of languid grace… like a beautiful corpse awaiting an undertaker.

Over the weekend, we painted more shutters… and doctored up some old windows, hoping they will last a few more years before they need to be replaced.

The old wood is dried out and rotten in places. We put on linseed oil and let it soak in. Then, we sealed it up with caulk and paint.

The windows in the attic date from about 1860, when the house was completely rebuilt. Protected by shutters, they appeared to have never been touched again… until we went to work on them on Saturday.

“Tout casse, tout passe,” say the French. Without inputs of new energy, things degenerate and degrade. Everything breaks… and is gone.

Last week, we wondered about corporate earnings… When will they give way? Or have they already?

And yet, corporations sell to wage earners. How could businesses make more money when their customers are making less?

But let us begin our tour of the fish market by going south of the Río de la Plata… where we find the highest interest rates in the world.

What the Argentines don’t know about financial fishiness isn’t worth knowing.

Last week, for example, the central bank of Argentina fixed its key rate at 60% – after its previous fix of 45% failed to fix the problem of the failing Argentine peso – leaving the pampas in the same fix they were in before.

The real problem is that they borrow too much money. Then, they’re far from being reliable payers. They default punctiliously – about once every 10 years. Then, they start again, usually with the help of the International Monetary Fund – which lends, of course, other people’s money… and doesn’t worry too much about getting it back.

(We will be going back to Argentina in a couple of weeks, where our dollars are worth about three times as much as they were a year ago. We’ll give you a fuller report then.)

In the meantime, part of the reason Argentina is so desperate is that it has a government deficit of 6% of GDP; by comparison, Italy has a deficit of only 2% of GDP.

But wait. What about the U.S.? Over the last 12 months, government debt rose by about $1.2 trillion.

This is not exactly the same thing as the “deficit”… but it’s a more honest measure of how fast the feds are going into debt. U.S. GDP is about $20.5 trillion. So the U.S. has about the same shortfall as Argentina – about 6%.

Ah… Here at the Diary, we like banana republics. The weather is often nice. Prices are generally low. Politics and finances are fairly straightforward. And we like bananas.

But the main difference between the U.S. and Argentina is that the U.S. doesn’t have to borrow money in a currency it doesn’t control. Both borrow in dollars. But the U.S. can create more dollars at will. Argentina can’t.

So Argentina borrows too much and defaults. That’s what banana republics do.

What does the U.S. do when it borrows too much? That, of course, is what we’re going to find out.

Business expansions have their seasons, too. In theory, a new president wants to take the pain of correction early in the election cycle, so it can be blamed on the previous administration.

Then, the new POTUS will want to loosen up both monetary and fiscal policy, so the economy is running hot when the next election comes.

The Trump team is trying something different.

It cut taxes and increased spending, giving the nation a fiscal stimulus and bringing forward a little boom-let early in the election cycle.

That is the source of those corporate earnings that seem so strong. After-tax earnings are up because taxes are down. Take away the effect of the tax cut, and business earnings are where they should be – flat.

Fully 96% of increased post-tax earnings in this latest quarter can be traced to tax cuts. If you look at before-tax earnings, you see little improvement at all.

From an investor’s point of view, so what if the extra money comes from tax cuts? A dollar saved from taxes is as good as a dollar earned, right?

Well, yes – but it has different consequences. In this case, the feds were already running a deficit. Cutting taxes has caused a larger, banana republic-style deficit – soon to be $1 trillion, which will have to be reckoned with in the future.

All of those options are open. All are, more or less, honest.

But our guess is that the U.S. will choose none of them. Congress will not be able to cut taxes or spending.

As for defaulting… what do you think we are, some banana republic?

Instead, the feds will choose something worse… something even fishier…

Historically, September has been the best month to buy gold each year…

That’s the story today as we chart gold’s average seasonal gains since 1973.

As you can see, gold has delivered average gains of 15.1% from September through February each year since 1973. 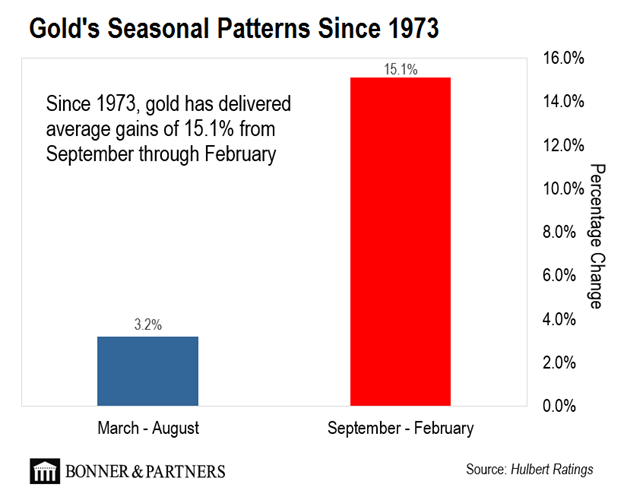 That’s compared to just 3.2% average gains during the rest of the year.

So if you’ve been thinking about adding some gold exposure to your portfolio, history says this is the best time of the year to do so.

Old-School Retail Bounces Back
Much has been written about the supposed death of brick-and-mortar retail at the hands of e-commerce giant Amazon. But while some retailers have floundered, others have rolled with the punches… and customers are walking through the door once more.

The Economy Is Booming for (Some) Americans
As Bill reported above, there’s something fishy about America’s economic boom. Official growth rates are strong as unemployment hovers near a historic low. But behind this data is a disturbing trend: Nearly half of Americans struggle to purchase basic goods like food and housing.

How Trump Takes on Big Tech
Last week, President Trump accused Silicon Valley giant Google of “rigging” search results to stifle conservative-leaning viewpoints. Google denies the claim. But now, Big Tech is squarely in the crosshairs of the Trump administration. Here’s how the showdown might shake out…

In the mailbag, President Trump remains front and center…

If you people hate our current president to the extent that you are actually publicly bashing America’s leader – who actually was voted into office by other Americans and who appears to love this country – then why don’t you all pack it up and go to another country that encourages bashing of its political leaders. Oh, there isn’t another country that encourages and allows this type of slander directed at its leaders without serious repercussions!

Thanks for another succinct summation of the dismal failure of Trump’s policies and the reality TV antics he uses to baffle and befuddle the public and the gullible media who hang on his every tweet. The figures you quote are undeniable. Numbers don’t lie.

Too bad those truths will never be accepted by half the American population. Like the tinfoil caps worn by some of the nuttier conspiracy theorists to block out the telepathic thought-control they imagine aliens are beaming at them, the red MAGA caps of the Trumpites deflect all truth and reason while absorbing whatever bull**** spews from Trump’s mouth and tweets. The old computer programmers’ mantra says it best: “Garbage in; garbage out,” which explains the irrational ravings of the redcaps.

In an article by Washington Post writer Kathleen Parker that was in the Houston Chronicle on 8/27/18 – “Trump… seems to surround himself with people of poor character and criminal minds – notable exceptions notwithstanding… And why would this be so? Because Trump’s first reflexive inclination in any given situation is to cover up, lie, bully, silence, pay off, and deny, deny, deny.”

People act like it’s unfortunate that Trump has surrounded himself with shady characters. He knew what he was doing. He picked people that were just like him.

I have consistently read your articles over the past 10 years and have observed something you, perhaps, may have missed. The past two years since Trump was elected, I have noticed that the answers I get from local politicians, corporate finance officers, and others who hold the reins of true knowledge, information, or power have all become politicized!

You cite your sources, and I look and find they are left-leaning or right-leaning. So how, honestly, can you give or get a legitimate “forecast” of anything when those who are giving you numbers/information either love or hate Trump?

Bill, you’re thinking way too small. Trump sees America’s debt on a world scale with a world solution. You don’t make trillions with American tax or budget cuts. You have to make some “good” deals. The best deals involve a winner and a loser, often a very big loser. On a world scale, there are many potential very big losers – trillion-dollar-scale losers.

America is not responsible for their being losers. However, Trump (nor I) will not say this to the world. He simply positions America at the front of the line. You must leave Wall Street thinking behind; they wear equity blinders. This requires world-scale thinking. Relax, and I know it will come to you.

President Trump campaigned on a promise to jumpstart America’s economy with a massive infrastructure buildout. And leaked White House documents from earlier this year suggest the president might be doing just that.

But it’s not a buildout of roads, bridges, or canals. It’s something else entirely. 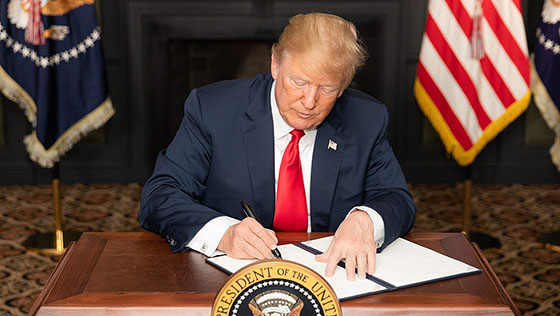