BALTIMORE, MARYLAND – Whatever good was done by the Trump/Xi trade war truce in Buenos Aires was likely undone by what was done in Vancouver Airport earlier this month.

The U.S. stock market warmed to the idea of a ceasefire last Monday morning. Then came word that the U.S. government had arrested Meng Wanzhou, the chief financial officer of Chinese technology firm Huawei. The feds got the Canadians to collar the poor woman while she was changing planes in Vancouver.

Few people in the U.S. have ever heard of Huawei. Still, the event had a pin-like look to it. And by the end of the week, investors had lost $1 trillion. This morning, by inference from futures trading, they are set to lose a half a trillion more.

Nope. Even she didn’t know what the charges were.

But whatever they were, the U.S. government had not only made a federal case of it, but an international “cause célèbre,” too.

What Ms. Meng is accused of is neither a genuine crime nor a misdemeanor.

Instead, she apparently ran afoul of the Deep State’s bogeyman program. Officially, her company is accused of using shell companies to access the Iranian market in defiance of U.S. sanctions on the country.

That is, it is not enough for the feds to regulate every living creature and every transaction that takes place in the 50 states. They also claim authority over the rest of the world.

No money can change hands without the consent of the U.S. (which controls the world’s reserve currency – the dollar – and the international banking protocols – the SWIFT system – that allow people to transfer money from one country to another)…

Nobody can trade with a foreign country if it doesn’t meet U.S. approval…

And no sparrow can fall anywhere on the planet without a shove from the Pentagon.

Ms. Meng is the CFO of the second-largest cellphone maker in the world, and the daughter of its founder. Huawei has 170,000 employees. It is as important to the Chinese government as General Motors once was to the U.S.

But the Deep State pretends to protect Americans from bad guys – in this case, Iranians – by imposing sanctions on people all over the Earth.

You can imagine what a hullabaloo would follow if the Chinese pulled a similar stunt.

Suppose they tried to boss other nations around with a “sanctions” list that included some half a million of the world’s leading business and government officials.

And suppose, honoring a Chinese warrant, the authorities in Singapore picked up Mark Zuckerberg or Bill Gates.

The Chinese, for example, regard Taiwan as their territory. And they regard the present Taiwanese government as illegitimate traitors. They could easily announce “sanctions” against anyone trading with Taiwan… which would implicate thousands of American businessmen, politicians, and government employees.

Then, stopping at Singapore airport for refueling, perhaps en route from a conference in Moscow back to a home office in Sydney or San Francisco, an executive could be nabbed by the Chinese – for an offense that Americans might find silly, irrelevant, or plain stupid.

If humans were cows or tree squirrels, no offense might have been taken. But we homo sapiens live in a world of jealousy, hate, and revenge. The U.S. would be outraged. It could be an Archduke Franz Ferdinand moment – the kind of event that is hard to reconcile with today’s power politics… and hard to ignore or forget.

In the present case, the Chinese, who value “face” more than money, took offense. They see the arrest as illegal, high-handed, and a breach of the ceasefire reached only a week earlier.

That Kind of Deal

And the trouble with the seizure of Huawei’s CFO is that there was no give in it.

The Chinese must have said to one another, “Oh, it’s that kind of deal, is it?”

And yes, they were right; it is that kind of deal. A raw power deal, where might doesn’t necessarily make right… but it prevents anyone from saying anything about it.

The Deep State’s imperial britches are very large, in other words. But arresting Ms. Meng may have signaled that the Trump foreign policy team has outgrown them.

Not that the U.S. is not still the muscular man for whom they were made long ago. But in the last 40 or so years, it has added more than a little fat around the middle. It has troops in 170 countries. Its government has 20 times the debt it had in 1980.

Its people suffer 100 times more regulatory control. Its stocks (in Dow terms) went from being valued at 1 ounce of gold in 1980 to more than 20 today.

Many of those promises are marked to market each day – in the stock market. Prices go up. Or they go down.

We’ll see what they do next.

That’s the story from today’s chart, which tracks investment dollars moving in and out of gold-backed ETFs each month since the start of 2018. 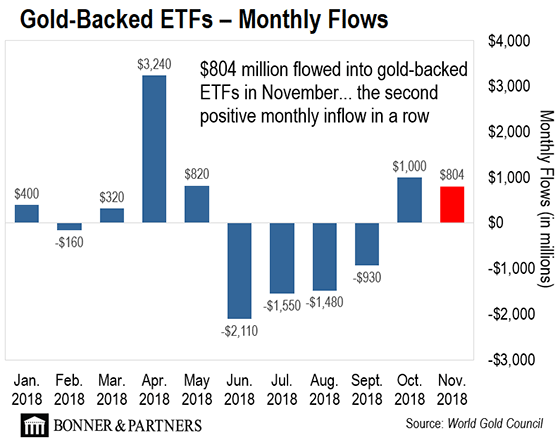 As you can see, $804 million flowed into gold-backed ETFs in November… which was the second positive monthly inflow in a row – following October’s $1 billion inflow.

This came as the S&P 500 fell another 4% through the first three weeks of November.

All-told, the S&P is now down a full 10% from its September high. The price of gold, meanwhile, has climbed 3% over the same time as investors moved to hedge their risk.

If the current volatility in U.S. stocks continues, expect the price of gold to climb higher in 2019.

Big Tech Heads Back to DC
Tomorrow, Google CEO Sundar Pichai will go before Congress. The subject of discussion: Google’s plan to create a version of its search engine that abides by the Chinese government’s censorship rules. Here’s what you ought to know before tomorrow.

Madoff’s Victims Are Being Made Whole
It’s been a decade since Bernie Madoff was caught running the world’s largest ponzi scheme and charged with stealing billions from investors. Now, 10 years on, some good news: those victims are close to being made whole.

What to Buy When the Market Goes Nuts
As Joe Withrow mentioned above, U.S. stocks have been plummeting since September. In addition to holding gold, here’s another strategy investors should consider…

After Bill’s recent Diary on climate change, more feedback from dear readers. Is our editor “ignorant” about the situation? Or is his analysis spot on?

I actually feel embarrassed for Mr. Bonner and his ignorance about not only climate change, but his apparent total lack of awareness about ocean acidification due to CO2 buildup.

Wow, OUTSTANDING article on the subject of global warming. I always enjoy Bill’s commentary, but this one stands at the top. It’s a crystal-clear argument about who benefits from global warming and who doesn’t. Regardless of the science, Bill succinctly addressed the human side of the issue in very few words. Well done!

It should be noted that they have determined that we may be entering a period when sunspots are decreasing. The last time this happened, there was a minor ice age that lasted 70 years.

I do not think the evidence of global warming is nearly as speculative as you paint it. There is a great deal of information at hand, if you take the time to sort through it. And while there may well be “winners” and “losers” in the changes, the disruptions would be almost incalculable. Look at the mounting frequency and severity of storms, droughts, floods, fires, and the like. There will be evermore victims on the front lines of the problem. We are not nearly as mobile, flexible, or indifferent as you seem to infer.

Good one, Bill. Energy cannot be destroyed or created. Energy keeps changing from one form to another, even without any artificial/human selection/intervention. For example, life on Earth went to near extinction state three times in the last 3.5 billion years without any human intervention. There are billions of such planets in the galaxy where energy is changing from one form to another. How energy rebalances in the galaxy can affect Earth doesn’t seem to be easy for humans to predict.

You fail to take into account the (current) massive extinctions of animals and insects, which means less pollination of plants, which means ultimately less food, which means rioting, mass migrations, desperate chaos, which means the end of civilization as we have known and enjoyed it. You also say nothing of the filling of the seas with plastics and other toxins that are killing phytoplankton, the source of about half of our oxygen on Earth. And the cutting down of yet more forests means trees are no longer able to provide us with oxygen. So, ultimately, we will gasp our way deathward.

The globe has been warming since around the early 1700s, as we started to exit the Little Ice Age. In the last hundred years, it is possible, or even probable, that human CO2 emissions have accelerated this warming trend to some unknowable extent.

However, what really concerns me are the global elite who want to use global warming as a pretext for global control. These are the same people who flew over 1,700 private jets into Davos (and surrounding airports) a few years ago to discuss what measures they should impose to ensure that the common man reduces his carbon footprint.

Clearly, they would expect to continue flying their private jets when and as they desire, but feel that commercial jet traffic should be made more expensive and restrictive, along with all sorts of other controls on carbon emissions for the common man.

I agree that we should encourage and adopt advances in technology that reduce our net carbon emissions. But I absolutely oppose ceding any more control to the global elite so they can tell the rest of us what sacrifices we have to make to protect their oceanfront estates.

Teeka Tiwari, the world’s top cryptocurrency expert, will be making an extraordinary announcement on Wednesday at 8 p.m. ET.

During this webinar, he’ll give you the inside scoop on an event that will transform the crypto market in 2019… He’ll also show you a leaked Wall Street document that reveals what this event is.

The only way to get your invitation is to register for the online event. Click here and enter your email address for free access right now… 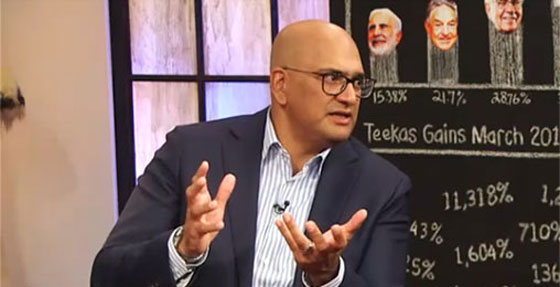