POITOU, FRANCE – Arnold at West Point… Sherman at Atlanta… Powell at the UN… We Americans remembered our heroes yesterday.

And here at the Diary’s headquarters in rural France, we recalled one of the greatest of them all…

Our July 4th holiday was spent in quiet relaxation, repainting a third-floor bedroom. Unlike chainsaw work, you can let your mind wander when painting without worrying about losing a leg.

And so, our mind left the reservation, where all good patriots are confined, and focused on the rascals and scalawags who made America what it actually is today.

We quickly realized that we were spoiled for choice. Who was the greatest?

Was it Hamilton, who crushed the Whiskey Rebellion and centralized power in Washington?

Was it Lincoln, who launched a war that laid as many as 1 million Americans in early graves?

Was it Teddy Roosevelt, who set the nation on the road to imperial glory when he pushed American soldiers into Cuba and the Philippines?

Or was it Woodrow Wilson, who looked in the mirror and saw Augustus himself?

Alas, the pantheon of political heroes bulges with counterfeits. But since our beat is money, we’ll limit our research to the lowlands around Olympus… and the lowlife bars in the vicinity.

That was where we found our hero on Tuesday… in the pages of The New York Times. Ben Bernanke, the former Fed chief, gave a speech to a group of economists.

For reasons the Times kept to itself – if it actually had any – the paper passed along his thoughts as if they were important.

Ben Bernanke’s moment of ersatz glory came as Lehman Brothers went broke and the financial system seemed on the edge of collapse.

In September 2008, people were running around like chickens with their heads cut off. But in his shameless memoir, The Courage to Act, he didn’t mention that he had the bloody cleaver in his hand, waving it in front of Congress and warning that if the politicians failed to act on Friday, “you may not have an economy” on Monday…

…which just shows how much he knew about economics and markets.

Panics are useful; they clear away – quickly – bad debts, bad businesses, and bad investments. But nothing of real value disappears.

Houses… shops… factories… cars – they weren’t going away. Neither was the economy.

By 2007, the Fed had pushed rates down too low for too long (Mistake #1). That led to over-expansion, malinvestment, and the misallocation of capital.

And then, when the Fed raised rates to try to “normalize” the credit markets (Mistake #2), it pushed the borrowers over the edge.

That is what is supposed to happen.

Bubbles should pop. Bad debt should be eliminated; and borrowers and lenders are supposed to learn not to do that again.

Instead, in the panic of ’08–’09, Bernanke went straight to the Biggest Mistake #3 Ever Made: He cut short the learning process and stopped the correction.

The Fed Funds rate went to “effectively zero” … and instead of allowing Wall Street to suffer its errors with dignity, the Fed added some $4 trillion in liquidity – through its “quantitative easing” – to help float the brokers’ yachts in their Connecticut harbors.

The New York Times tells us that the richest 10% scored a 27% increase in their wealth since 2007. The top 10% have doubled their share of national wealth since the ’70s. And the top 0.1% now owns as much wealth as the entire bottom 90%.

Even in the greatest economy ever – according to the Trump team – the wealth continues to flow to the few, not to the many.

Share buybacks hit a new record in the first quarter. And a report from global charitable organization Oxfam showed that 82% of the wealth generated worldwide in 2017 went to the top 1%. The bottom 50% got nothing.

And in the U.S., household savings dropped to a new low this year – below 3% – while household debt hit a new record high in the first quarter. It is at $13.2 trillion, with debt service payments at nearly 6% of disposable income.

But nobody seems very interested in finding out what is really going on… or why.

Speaking to the American Enterprise Institute think tank, Bernanke neither admitted fault… nor did the Times find any.

Instead, both Bernanke and the Times preferred to focus their attention on the Republicans’ ill-advised tax cut.

“It makes the Fed’s job more difficult,” he told the group, “because what you’re getting is a stimulus at the very wrong moment.”

A tax cut without a corresponding spending cut is always a fraud. But it is a fraud that most economists – including Ben Bernanke – approve of… if it is done at the right time.

In their view, the feds know when to tighten up and when to loosen up. And now, when the economy is allegedly running hot, is supposed to be the wrong time for a tax cut. The extra spending will cause prices to rise, they say.

Then, when times have changed and a recession has begun, “What will the Fed do?” they ask. It will want to cut rates. But it is required by law to put up rates to bring inflation, caused by the tax cut, under control.

Thus, will its options be reduced and its hands tied. And the coming debacle – for which Bernanke bears more blame than anyone else – will be the Republicans’ fault.

And thus does Ben Shalom Bernanke, the “Hero” of ’08 and Time magazine’s “Person of the Year” for 2009… seek to save his place on the Rushmore of finance – shoulder-to-shoulder with John Law, Charles Ponzi, and Bernie Madoff.

We are going through the final stages of the 2018 crypto bear market.

That might be hard to believe. The mainstream press loves to spread fear, uncertainty, and doubt whenever a cutting-edge technology surfaces. And that’s exactly what they’re doing with cryptocurrencies. Theirs are not informed opinions.

As I touched on last week, I have spent considerable time and money traveling to numerous cryptocurrency conferences – several of them quite exclusive.

I’m talking to the thought leaders in the crypto and blockchain space… I’m speaking to seasoned executives in the tech sector… and I’m meeting with people from the upper echelons of Wall Street.

Contrary to what we might read in the mainstream press, not only is activity not declining in this space, it is rapidly increasing. Investment in blockchain-related technology has already exceeded that of last year, and we are only halfway through 2018. As a result, research and innovation in this space continues to accelerate.

For reference, have a look at the chart below. It shows the amount of funds raised from initial coin offerings (ICOs) so far in 2018. 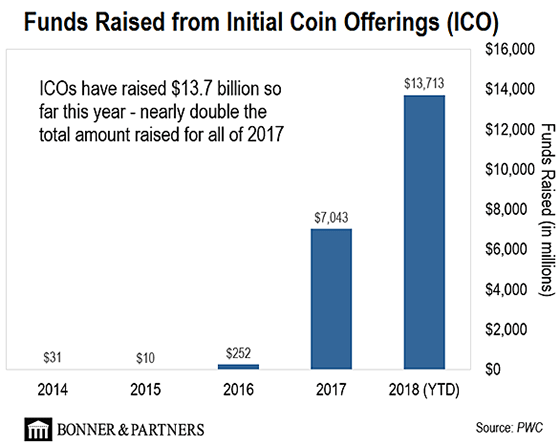 ICOs are like initial public offerings (IPOs) in that they are a way for companies to raise capital. But in an ICO, companies sell digital tokens instead of stocks – typically in exchange for major cryptocurrencies like bitcoin and ether.

These digital tokens usually provide future access to the company’s product or service, and they can also convey ownership interests… though that’s not a requirement.

One reason ICOs have boomed this year is that the regulatory climate has become clearer. As such, most ICOs today are compliant with the U.S. Securities and Exchange Commission… which makes them a legitimate alternative to traditional means of raising capital.

Here’s what I can tell you with absolute confidence: cryptocurrencies (digital assets) and blockchain technology are not going away. To the contrary – they are going to become ubiquitous in our lives.

If we think back to 20 years ago, email started out as this quirky application that few thought would catch on.

That’s exactly what’s going to happen with cryptocurrencies and blockchain technology… except it won’t take 10 years. I would be surprised if it took more than five.

So short-term volatility is nothing to worry about. I have no doubt that quality digital assets will ultimately move much higher.

P.S. As I said, regulation around ICOs is becoming more and more clear. Soon, investing in an ICO will likely be as easy as purchasing stock from your online broker. The difference is that these investments have the potential to return 100X in as little as 18 months.

There’s still a chance to take part in this ICO revolution before the average investor – and the mainstream media – catches on. Here’s how.

Tax H(e)aven
Heightened taxes in states like California and Illinois are having a visible effect, but not the one lawmakers were hoping for. High-net-worth individuals are leaving the states in droves. Here’s where they’re going…

Own .0000001 Empire State Building Coins
Jeff Brown, Bill’s top technology analyst, recently returned from several cryptocurrency conferences in New York. There, he met with high-level executives and hedge fund managers. Here’s what they revealed about the future of cryptocurrencies…

ATM Thieves Hit the Jackpot
A specific type of ATM theft known as jackpotting has been rampant in Europe and Latin America for more than a decade. The U.S. seemed immune to this scourge… until just recently.

After Bill recounts a conversation with a fellow partygoer about President Trump, one Dear Reader comes back with strong words for our editor…

It’s clowns like you that would write the statement “And then, Donald Trump will still be the hero of the great unwashed… the untutored, untraveled masses in Flyover Country.” I live in Flyover Country, shower every day, have been an electrical engineer for 55 years, have trained many people in engineering and software, and have traveled to all parts of the world. (I still have over 300,000 skymiles.)

It’s people like you who think they are elite, and call those of us who elected Mr. Trump “deplorables.” You must be a liberal who was given a big “wedgie” when Trump won. Also, screw what you, your people, and Europeans think. I am only concerned with what us “deplorables” think.

But it’s not all name-calling in the mailbag…

How I love Bill’s musing thoughts; they have the effect of taking me away from reality. I do not know why. Bill’s descriptions of the antics of the great Donald are hilarious. I really look forward to this as one of the highlights of my day. Thank you.

I have been enjoying, appreciating, and participating in Bill’s Diary emails for some years now. Thanks, and have a happy 4th.

It’s amazing, Bill, what a few glasses of wine in the French countryside will produce! We are all pawns in a much greater battle that rages around us. We try to placate our worries, fears, and helplessness with food, shelter, sex, mass media, and other “needs.”

We live in a fallen world, and the only way to wade through the “swamp” is our connection to Our Lord. This one relationship can take away all our fears, and allow us to flourish while the spiritual battle for our lives rages around us. And this came without the benefit of fermented grape juice (but we will indulge in gin and tonics later tonight in the comfort of our home).

They’re hosting a live event on July 19, during which Teeka will reveal three FREE cryptocurrency recommendations.

You’ll also learn how you can claim a share of the $2 million bitcoin giveaway.

Get the details from Teeka and Glenn below… 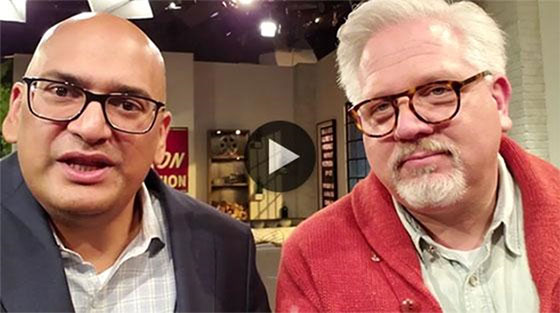