Eighty-two percent of the world’s wealth generated last year went to the “One Percent.”

That leaves 18% for the bottom 99%. Many of the 99 percenters must have gotten nothing at all… or less than nothing.

Numbers are always a little squirrely. Give them a bribe or threaten them with violence, and they’ll say practically anything.

But, spontaneously, more and more numbers are coming forth and bearing witness against a fraudulent economy.

Looking at the economic picture in the U.S., we are meant to see happy people getting richer, with a bubbly stock market, low consumer price inflation, and jobs for whomever wants one.

That is the picture the news media, the financial press, Wall Street, and the Trump administration draws.

But what we see is claptrap. The dots don’t connect.

In a labor pool with barely any increase in average wages, if some wages are going up, other wages must be going down.

And in a country where growth is concentrated in a few urban-suburban conglomerates – Washington, D.C., New York, San Francisco, etc. – there must be a lot of places where people are not drinking cappuccinos, sending their children to private schools, or listening to NPR.

But we’ll let you draw your own conclusion.

We asked our research department, headed by the able Joe Withrow, to comb through the U.S., county by county, and tell us where people were better off… and where they weren’t.

His report can be read in full here. You should read it. The assumptions and analytical methods he used are important.

In addition to the expected evidence came a revelation: GDP growth is largely counterfeit.

We’ll get to that in due course…

First, here are the highlights of Joe’s report… including a map:

According to the Bureau of Economic Analysis (BEA), wages have risen 36% since the 2008 financial crisis. The jobless rate has been cut in half. And GDP has grown 20%.

The economy is cranking out more jobs… more money… and more stuff.

The U.S. is a diverse nation of 325 million people. It’s composed of 50 states. Those states are composed of 3,141 counties. And those counties are very different from one another… as are the people who live in them.

But the BEA ignores this in its analysis. Instead, it rounds up economic statistics from all over the nation. Then it picks out the averages… and puts makeup on them. It smooths out their wrinkles and evens out their complexions.

Can you spot the problem?

GDP measures include government outlays… but those outlays exceed tax receipts by a wide margin every year.

So, a portion of government outlays are financed by money created from nothing… and that is picked up as “growth” in GDP.

The people receiving that money then spend it on something… which is picked up in the “private consumption” part of GDP.

By the way, government transfer payments have exploded by 45% since the 2008 financial crisis. And GDP metrics have captured every single penny of that as “growth.”

At Bonner & Partners, we pass no judgment. Old… young… fat… lazy – we don’t care how attractive your county is. We just want to know what it looks like before the feds doll it up.

The map reveals that people in 2,278 counties have gotten poorer over the past 10 years. As best we can tell, that means 73% of U.S. counties are in a depression.

Let’s look at each of our metrics. Over the past 10 years:

What is most surprising to us about this study is that even in counties where the Deep State and its crony industries are in full flower, most people are withering.

Could that be true? Could nearly three-quarters of U.S. counties really be in depression? And what does GDP really mean?

Editor’s Note: David Forest is the newest analyst over at Casey Research. He is a geologist with a 20-year career in petroleum, mining, and mineral exploration. David uses his decades of experience to spot profitable investments in the commodities and natural resources sector.

We’re entering what I believe will be one of the biggest investment opportunities we’ve seen in the current millennium: a major upcycle in commodities.

My research shows that commodities as a group are about to enjoy a historic resurgence. The kind that has happened regularly and reliably throughout history, and which has made fortunes for early investors.

Now looking at commodities today, you might not believe we’re at a bottom.

Most commodities right now are priced middle-of-the-road on a historical basis, if not a little on the high side.

Supply and demand figures also don’t show much cause for alarm.

You see, this chart shows clearly that commodities are indeed at a cyclical super-low. The kind that historically precedes explosive upward market moves with great reliability. 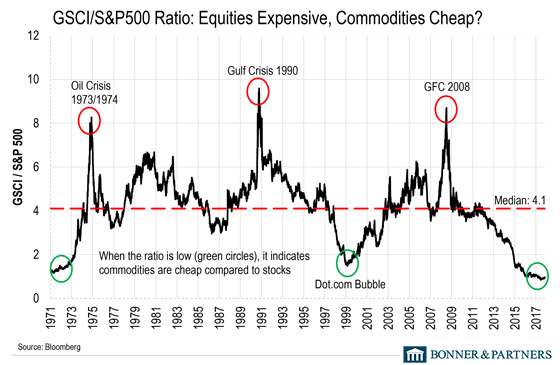 Here’s what you’re seeing in the chart above…

The black line is commodities prices – but not in absolute terms. Rather, we plotted commodities (as represented by the GSCI Index) as a ratio to the stock prices of the S&P 500.

Why is this a critical distinction? Because, as I showed above, absolute prices of commodities right now appear to be at very healthy levels.

But when we look at commodities compared to everything else in the world, they’re ridiculously cheap.

Right now, the ratio of the commodities index to the S&P 500 is below 1. The average of the same ratio since 1970 is 4.1 – meaning that commodities are more than 75% below the normal pricing that’s prevailed for the last 47 years.

In fact, this is the lowest the commodities-to-stocks ratio has ever been during this recorded period. Lower than the lows put in during the early 1970s or at the peak of the dot-com bubble in the late 1990s (both circled in green above).

Both of those periods were followed by an explosive reversion to the mean. Between 1972 and 1975, commodities, as measured by the GSCI Index, soared 250%. Between 1999 and 2007, the gains were even more spectacular, with commodities soaring 400%.

And today, commodities are even cheaper – in relative terms – than before those two coiled-spring events.

P.S. The time to get involved in commodities is not when they’re already front-page news and prices have soared… It’s now.

This is the market we’ve all been waiting for… and Doug Casey and I believe we’re going to see some incredible moves in commodities in the next few years.

To learn how you can position yourself to profit from this rare market phenomenon, click here to watch our brand-new video presentation.

An Inside Look at “The Swamp”
It’s no secret that Wall Street is deeply entrenched with the Deep State. Here’s an inside look at how billionaire hedge fund managers make their biggest payoffs… without the public ever knowing.

Beware the Dangers of ETFs
Exchange-traded funds (ETFs) are some of the most popular investment vehicles of the past few years. They allow investors to gain exposure to sectors or entire countries with one purchase. But ETFs also have a darker side… here’s what to look out for.

How to Thrive in 2018
We’re almost a month into the new year, but there is plenty of road ahead for 2018. Chris Mayer, one of Bill’s top analysts, shows how investors can thrive in 2018.

In the mailbag, the once-great GE is still on readers’ minds…

About GE, they designed Fukushima and forgot to put in a giant water reservoir to flood the atomic reactors in case of pump failure. Too bad they cannot pay back all the lives they have stolen. Dinosaurs need too much to be maintained alive anymore. We need a new type of entrepreneur focused on the social impact they have and giving attention to people in their environment.

The internet of things is driven by these dreamers that did not ask themselves if the project was human biology-friendly. Too bad nobody can lie to Mother Nature nor to human physiology. So, back to the drawing board. The elite of powerful dreamers will not get the long-term success until the real impact of the electromagnetic fields is reformed to cope with human health. I am looking for ethical funds harmonized with life on Earth.

You’re too hard on Jack Welch. And you’re ignoring the lackluster, “Me Too” management of the company since his departure. GE’s record of success with acquisitions isn’t unique; e.g., ITT prior to GE, and for that matter, the overwhelming majority of acquisitions regardless of acquirer.

Great article, I am working for a company that has adopted Jack [Welch’s] methods over the last seven years. My personal favorite is, “You don’t need to know the business to manage it correctly.” Also, “If you have five good-performance workers, someone has to be bad; we have to trim someone.” What if you have a group of great people? Amazing stuff; I really appreciate this.

Nice letter, Bill. But as times change, so do strategies! Does Jeff Immelt have no blame for righting the ship after 17 years? Come now, let’s be a little bit fairer to Ole Jack.

Interesting piece today over the all-too-tragic tale of the once mighty GE. At some point (likely soon), it will be an attractive buy-in for someone to turn it around. GE was never Jack Welch’s. He was just the guy taking credit, making a fast buck, and undermining the real folks (employees) who made GE an industrial titan. They did it once, and at some point, they will be called upon to do it again.

Oh… and for the record, your opening of today’s piece is terribly flawed: France has never produced much in the way of great, and sure as heck not a soldier!

Meanwhile, after a 7.9-magnitude earthquake struck Alaska, one of Bill’s dear readers sends an update from up north…

Greetings from Alaska. You may have heard that we had a bit of a shaker last night. Magnitude 7.9. The National Earthquake Information Center and Google Earth tell me it was about 320 miles from my house. I was just drifting off to sleep when it started. My house was creaking and cracking, and I heard something fall, but it did not sound like anything major. When the shaking finally ceased, I discovered that one hand had a vise-like grip around the other wrist!!

I unclamped my wrist and drifted off to sleep. An aftershock woke me a few hours later, but I just returned to dreamland and forgot about it. Tonight, after work, I did a house inspection. As the photo shows, the only book that fell was yours, When the ATMs Go Dark. As far as I know, the ATMs kept working… I rarely use one. Kodiak was much closer to the epicenter… You might want to give them a call to see how their ATMs are doing.

Bill’s Book, When the ATMs Go Dark, at home in a reader’s library

Editor’s Note: Bill’s most recent book, When the ATMs Go Dark, is available for digital download for free to all subscribers of The Bill Bonner Letter. Access it here. For new Diary readers, you can learn how to grab your own hardback copy by going right here.

Cryptocurrencies are way down…

Bitcoin, the world’s first cryptocurrency, is down almost 50% since December. 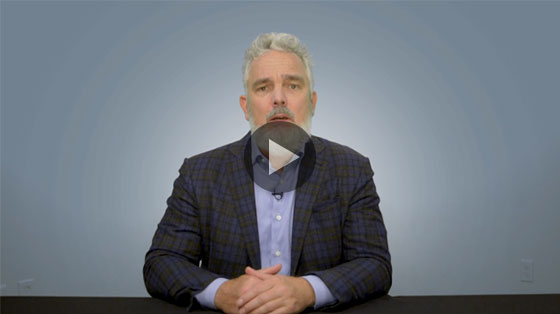