Bridgewater’s Ray Dalio was on 60 Minutes over the weekend; he thinks American capitalism is such a mess – and that inequality of wealth is so skewed – that the president should call a national emergency to fix it.

But the real emergency lies elsewhere.

We left off yesterday by noting that the masses didn’t feel they should have to worry about deficits and debt.

They’ve been told that deficits don’t matter. And government finances are always a mystery, like the Virgin Birth and who shot JFK; it’s best not to ask too many questions.

Besides, why should they worry about it? They have elites to take care of things like that.

But like the masses themselves, the elite – the feds, their cronies, Wall Street, special interests, lobbyists, the Pentagon, the social welfare complex, the Deep State, and (generally) the rich – have been corrupted by fake money. They’ve grown accustomed to spending money neither they nor anyone else ever earned. And it’s a hard habit to break.

Fake money came from the Fed – $3.6 trillion of it between 2009 and 2019. Under the guise of “quantitative easing,” the Fed bought financial assets, mostly Treasuries. Yields sank. Stocks climbed. The ultra-rich got richer.

The Fed also kept interest rates below the rate of inflation – a giveaway, in other words – financing stock buybacks, mergers, acquisitions, bonuses, and other financial razzmatazz.

Altogether, the feds shifted about $30 trillion their way (a very rough estimate) and they weren’t about to give it up.

By 2016, both Republicans and Democrats were in on the racket. Neither was going to fight for a balanced budget. Because that would mean going up against both the retiring baby boomers and the Deep State.

And it would mean pain – big pain… spending cuts, falling stock prices, and a tough recession. Who wanted that? Everybody wants to go to Heaven, but nobody wants to die.

By 2016, too, the Fed had begun to normalize its monetary policies. There were two parts to it.

The Fed needed to raise rates to more normal levels… and it needed to unload the $3.6 trillion of bonds it had acquired after the 2008-2009 emergency.

But either action would cause the very crisis that it sought to avoid – a crash on Wall Street and a recession. It had trained the economy to survive in an abnormal financial climate. Normal weather would kill it.

Which is exactly what was underway in the last quarter of last year. Finally, for the first time in nearly 10 years, the Fed had nudged up interest rates so that the after-inflation cost of borrowing was (a tiny bit) above zero. And the stock market swooned.

Then, with stock prices down barely 10% from the 2018 high, the Fed lost its nerve. First, in late January, it paused. And then, three weeks ago, it renounced the whole “normalization” program.

With no emergency in sight – in fact, Mr. Trump says we are in a big boom – the Fed said it would cease raising rates and wouldn’t necessarily sell those bonds, after all.

Meanwhile, Mr. Trump had put through a tax cut, which he thought stimulated the economy and set off a new boom. As for runaway spending and compounding debt, the president thinks it is merely a nuisance, not a matter that is worthy of his attention.

Au contraire, he wants to stimulate the economy even more:

I personally think the Fed should drop rates, I think they really slowed us down. There’s no inflation. I would say in terms of quantitative tightening, it should actually now be quantitative easing… You would see a rocket ship. Despite that, we’re doing very well.

Well, we just got off of a rocket ship – when we left Argentina on Sunday. The theory of “stimulation” – whether by tax cuts, low rates, deficits, giveaways, or quantitative easing – is that if you put more money in consumers’ and businesses’ hands, they’ll spend it. Then, the spending will bring forth more production, jobs, profits, and growth.

But it doesn’t work.

In Argentina, everybody spends everything they get – as fast as they get it. Talk about stimulus! The currency is losing as much as half its purchasing power per year. Nobody wants to save it. Nobody. Not even for a weekend.

Meanwhile, the central bank of Argentina lends at 40%. In real, after-inflation terms, that’s negative by as much as 60 percentage points. That oughta get the economy off the ground, right? A whole lot of stimulating going on! So, you think Argentina would be a rocket ship economy, right?

GDP is falling, not rising… at a 6% annual rate. And if this keeps up, it will rival America’s Great Depression in severity.

What to do about it? Print more money… so the inflation rate goes to 200% and people will want to spend even faster? Stimulate with lower rates… lower taxes… and bigger deficits?

It won’t work. Because the whole “stimulus” idea is a fraud. You can’t make people richer by giving them fake money. Period.

And you can’t make them richer by cutting their taxes… unless you also cut government spending.

And you can’t make them richer by running bigger government deficits, or by suppressing interest rates, or by putting more fake money into the system…

There are just no shortcuts to real wealth.

Lyft’s $2.3 billion IPO on March 29 was the first of numerous high-profile public offerings that will launch this year.

Uber, Lyft’s top competitor, will announce its own IPO within the next month or two. And high-tech companies like Palantir… Pinterest… Slack… Zoom… And others will go public this year, as well.

Collectively, the 2019 IPO boom is expected to set the record for total capital raised by U.S. IPOs in a single year… 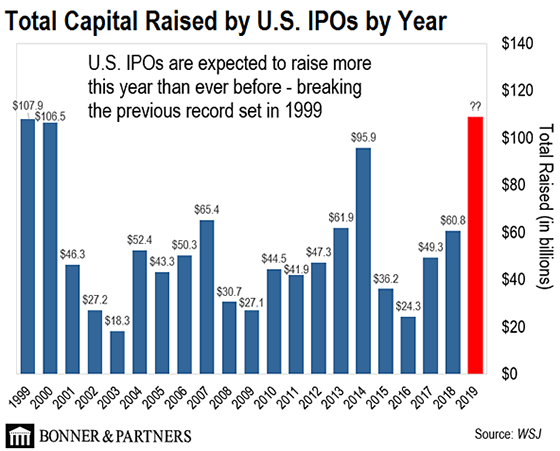 There is a big difference between today and 1999, however.

Back then, companies went public with little more than a business plan and a “dot-com” in their name. Their median age was 4 years old. And their median sales were $12 million per year.

Today’s companies are bigger and older. Their median age is 12 years old. And their median sales are $174 million.

Everybody knows that many of those 1999 IPOs crashed and burned within a year or two… Wiping out many retail investors.

What you may not know is that by 2002, those 1999 IPOs that had sales of $100 million or more were trading 45% higher, on average, than the smaller IPOs that had survived the bust.

In other words, the more established of the 1999 IPOs thrived through the dot-com bust.

And that same pattern has continued through today… Established companies that go public tend to make good investments. That’s why the 2019 IPO boom should be viewed as an opportunity.

In fact, there are hundreds of private “digital first” tech companies ready to IPO this year. These are companies that were born in the ashes of the 2001 dot-com bust… and remained private a long time to season and mature. This is the year their potential will be unleashed on the market.

2019 will be a banner year for tech IPOs. And that will give all investors a chance to own the most exciting companies on the planet.

P.S. 2019 will be a banner year for tech companies. The very best will soar by 10x or more, in the years ahead. And if I had to recommend one technology investment this year, it’d be this one.

But fair warning, this opportunity won’t be for everyone. If you can’t handle volatility or big price spikes overnight, then maybe sit this one out. But if you’re prepared to take on some risk to potentially make a small fortune, then go right here.

The New Tax Law Isn’t Done With You Yet
Most Americans are still learning the ins and outs of the new tax law. But wait… the IRS isn’t done, yet. The tax agency is set to make another big change later this year… and filling out this new form is going to be a lot like doing your taxes… again.

Walmart’s New Robots Will Be Just Like Smartphones
In order to complete more “mundane” tasks, Walmart has embraced robots. Shoppers will soon encounter robots gliding up and down the aisles, cleaning the floors and checking inventory… oh, and playing music, too. But as robots become more mainstream, the common fear remains: Will robots take all our jobs?

The Fed’s Next Desperate Move
As Bill put it recently, America’s Federal Reserve has now abandoned any pretense of sensible monetary policy. Come the next recession, the usual “toolkit” won’t suffice. The Fed will get desperate. And Dan Denning, Bill’s coauthor on The Bonner-Denning Letter, shows just how desperate…

Today, readers continue to contemplate a recent Diary favorite… “A Message From the Future.” Are we just like ostriches? Or more like Wile E. Coyote chasing the Road Runner?

Now, that is a serious reality check. Are we really that bad? And yes, we are the guilty party. Now, we may point and wag our fingers at the politicians, but why would it be only their doing? It is us that have kept electing them, and they kept doing it “for the people.” The trouble is that we call ostriches stupid for “sticking their heads in the sand” at a sign of danger. But look at us. We proclaim to be on the watch, while our “ship” is suffering serious damage by the “icebergs.” Are we sure we are awake and not dreaming? Yes, we are the subject of our nature. And it’s not easy to think anything other than, “ah, the way things are going right now will keep us on the same track…”

As you know, the stock market runs on greed and fear. I am suggesting it is staying up, because there are so many people who are on a greedy adrenaline high because of Trump’s policies. At some point, just like Wile E. Coyote chasing the Road Runner, they will discover there is nothing of substance to hold him up, and he falls when he comes to discover it.

Bill, what a great job you do with the Diary! I sure would like to visit your ranch. Please keep posting photos!

I’m really fascinated with all of your Argentine adventures. Your difficulties there so remind me of the ranchers I talked to in South Africa, who were having their properties taken from them under the guise of reparations. I fear it’s turning into another Zimbabwe. I, too, love Argentina. Anyway, keep up the good work.

Now, he’s pounding the table on a new idea… One that’s earned him the nickname of “America’s Cockiest Investor.” Read on here for all the details. 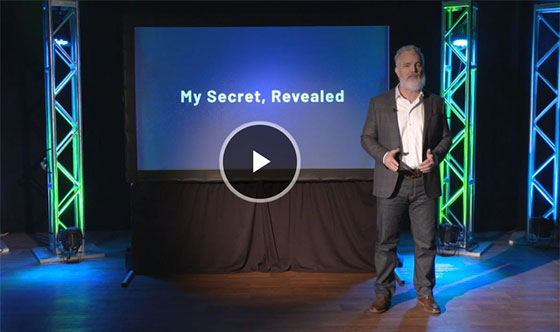