Vernacular: A vernacular, or vernacular language, is the language or variety of a language used in everyday life by the common people of a specific population. It is distinguished from a standard, national, or literary language or a lingua franca, used to facilitate communication across a large area.

This is the day that we learn something important… something almost nobody else knows.

We just discovered it yesterday; today, we pass it along. It is going to be very useful for us.

Before we do, we turn to the financial news – just to show you that we’re paying attention.

And yes, the Dow got a good boost yesterday, up more than 300 points. Reports this morning say that investors are less worried about a trade war. On the internet, too, are millions of posts and headlines describing what a great job President Trump is doing:

Political writer G. Heath King, to single out one example for future embarrassment, gushes that “Trump… hammered out and finessed the formula for an unparalleled economic expansion in peace time…”

But remember, there are still nearly 1,500 Dow points between here and January’s top. Unless the index rises above its last high, we believe the primary trend is down.

But we will leave that for today and return to the subject at hand: the vernacular.

In English, for example, a proper response to the statement, “I’m looking for Mr. Jones,” could be: “I am the person of whom you speak.”

That response is welcome if you are serving a summons. But it causes grammarians to squirm.

The vernacular evolves… often in response to formal rules. Many people today are afraid of the word “me.” They recall vaguely that the grammarians disapprove of it. So they go with “myself,” even though it doesn’t make much sense.

“Who was playing the guitar?”

They are also afraid of being politically incorrect.

Winston Churchill once mocked people who tried to speak “correctly,” saying: “That is nonsense up with which I will not put.”

But let’s not get sidetracked… We’re tracking bigger game here.

There’s a difference between what is and what is s’posed to be in other things, too.

Over thousands of years, vernacular architecture, manners, rules, transportation, laws… and even money… have evolved.

No government declared gold to be money, for example. Instead, it arose naturally as people found it useful. Later, governments declared other things to be “money.” These paper monies work well, more or less. But in a crisis, people tend to go back to the monetary vernacular: gold.

No law requires people to say please and thank you, either. But they generally do… and they generally find that it makes casual exchanges more agreeable.

Occasionally, as in the fervor of a revolution, these “bourgeois affectations” are dropped in favor of some ideologically correct claptrap.

“Vive la révolution!” was a popular greeting in France for a while in the 1790s. “Heil Hitler,” had its run, too. Both were soon dropped in favor of the vernacular.

Likewise, there is the formal government… and there are the informal rules, customs, and standards that people use to govern themselves.

Many of the colonies that gained independence after World War II, for example, used France, Britain, or the U.S. as their templates.

Some created systems which, on paper, were almost exact copies of those in use in the U.S. They had bicameral legislatures, independent judiciaries, checks and balances – the whole kit and caboodle.

But the new democracies in Africa and Asia didn’t always function like their Western role models.

A French joke illustrates the power of the vernacular:

The mayor of an African town in one of France’s former colonies came to pay a visit to the mayor of a French town of more or less the same size. He was astonished at the mayor’s office. It was full of fine furniture, expensive paintings, and rich decorations.

“How can you afford these things on a mayor’s salary?” he asked.

The French mayor beckoned him over to the window.

It took a moment for the African mayor to get the message. But his eyes lit up when he did.

Years later, the French mayor visited the African town. In the mayor’s office, he was shocked to find even more luxury than in his own – with Aubusson carpets, delicate Chinese vases, and Old Master paintings.

“Now, I have to ask you the same question you asked me,” he began. “How can you afford all of these things?”

The African mayor pointed out the window.

Now, in the U.S., the Constitution still sits in its glass case. The Supreme Court still sits on its bench. Members of Congress still sit in camera. And bureaucrats and nomenklatura still plop their fat derrières down in their seats of authority.

Officially, nothing has changed.

…they don’t give a damn.

Utility stocks – shares in companies that provide gas, electricity, water, and other essential infrastructure – are tanking…

That’s the story of today’s chart that maps the Utilities Select Sector SPDR ETF (XLU) – which holds a basket of 29 utility stocks – over the past 12 months. 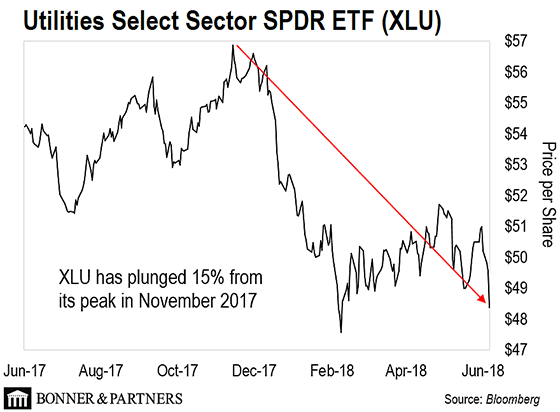 Utility companies are often considered to be conservative and defensive investments. That’s because society depends on the services they provide in good times and bad.

But with utility stocks plunging, it suggests that the market is in “risk-on” mode, and that it is ignoring traditional defensive investments.

Does Your State’s GDP Beat Tanzania’s?
The United States has the largest GDP of any country in the world. Even the individual GDPs of the 50 states often beat those of entire countries. How does your home state stack up against the world economies in this map?

This One Commodity Needs to Be in Your Portfolio
David Forest, Casey Research’s globetrotting geologist, believes that one commodity will see life-changing gains in the years ahead. It’s not oil… or gold… It’s this.

In the mailbag, some disagreement. Is Bill supporting President Trump or is he a “Never-Trumper”?

So nice to hear positive feedback about our president rather than all the negativity! Keep it up!

To say something positive about the president takes courage. I am disappointed you pile on with the “Never-Trumpers” and the Establishment bandwagon. I am the same age as you, and I have never seen anyone, save Jesus, with the same stamina for criticism and abuse as Donald Trump.

Encouraging someone who is working for our country and attempting to ferret out skunks is not a bad thing. If you pray to God, I would encourage you to pray for The Donald. You are making a fortune from the economy, with little gratitude. Even the arrogant owe much to our Creator. Think about it. Thank you.

I have been a subscriber and reader of your articles for many years. I don’t always agree with everything you print. However, I am a fan of your company. I am a 50-year-old, blue-collar guy. I am a huge saver and investor. I don’t believe that I will ever be wealthy, but will be able to retire comfortably in my early-60s, and that is fine with me. But on to the main reason for this email…

As stated, I am 50 years old. I am the youngest person working in my department at a large hospital in a very urban area just outside of Chicago. For years, we have discussed the lack of young people who can, as we say, “spin wrenches.” We are short-staffed and cannot find people to do this work. It can be dirty and hot, but it pays well for a regular guy with no degree ($85,000 per year). Jobs like this are not sexy enough for the young crowd. I have seen this coming, and everyone I talk to is in the same predicament.

So here’s the thing: As I approach retirement, I seriously wonder how bad it will be for all of us very soon. If I make it to 80 and I physically cannot repair my boiler or install a new hot water heater anymore, who will be able to do it? And will I be able to afford it? I believe that there is going to be a time when you and I will have to wait weeks for a simple repair that will cost an outrageous fee.

There are no young people doing these jobs today. At least, too few to make up for those of us who retire and have not trained anyone to take our places. The young crowds represented in the insurance commercials – who do not know what a lug wrench is or how to change a tire – are our future. And as I see it, we are in for a world of hurt. Thanks for your time.

This morning, as I was reading your daily missive, my 21-year-old grandson (who we adopted and have raised since infancy) looked over my shoulder and read the sentence, “Can an unskilled person find work so easily today? We don’t know.” He responded with a “No.”

I pointed out that the guy who wrote that question is today a multimillionaire, and that my grandson can look forward to the same destiny if he continues his current practice of taking any job available and working hard and honestly at it.

In September, he will go into his third year of “journalistic and communication studies.“ His summer job is working as a kitchen aide in the restaurant of a very posh local winery. When he finishes work today at 5 p.m., he will go to pull up thistles in an elderly neighbor’s yard, and she will pay him 15 bucks or so.

Many kids today don’t want to work menial jobs, and to their detriment, they miss out on a very vital experience which leads to productive and satisfying future employment and a career. Bill, you and I have been there and done that. I’m thankful that my grandson is following this example.

I have been reading your Diary for many years. Thank you for your faithfulness in challenging your readers, which you do so well.

Who is the “Billionaire Broker”?

For years, he was a high-profile Wall Street executive. He handled massive trades for billionaires and sovereign wealth funds. But now, he’s left all that behind.

One week from today, he’ll reveal one of Wall Street’s best-kept secrets: why the insiders always seem to be in the right place at the right time just before a stock soars. And he’ll show how you can be, too. Details here. 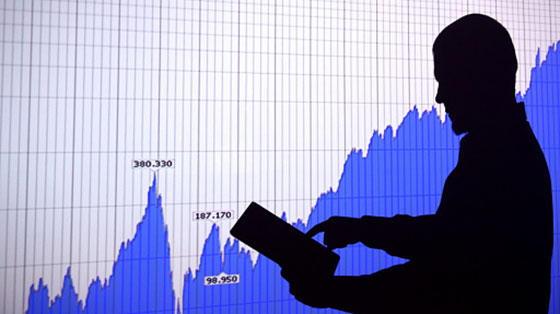