CORK, IRELAND – “Is the bull market in stocks finally over?” asks a Bloomberg headline.

We don’t know the answer.

No one knows the future. Still, people buy umbrellas even when it isn’t raining.

If we were you… looking at the sky and reaching a familiar conclusion… we’d make sure we had one close at hand.

But we’ll suspend our coverage of the financial weather to tell you what we’ve been up to here in Ireland.

Yesterday, we began our day in a blizzard. The flakes were so big and heavy they practically knocked us down.

We had driven out to look at a neglected country house, snaking around a narrow country road as the snow fell heavily.

“You’re on the wrong side of the road!”

Elizabeth wasn’t accusing us of driving badly, just fearing for her life.

It was the second time in less than an hour she had had to remind us: “Stay on the left!”

A big truck was headed directly for us. For a split second, we wondered why the driver didn’t get over to his side of the road.

Fortunately, Elizabeth called us to order, reminding us that the Irish drive on the “wrong” side of the road, before any damage was done.

The last couple of days have been spent house-hunting. We are going to be in Ireland, off and on, for the next five years. We might as well dig in… find a place we like… and enjoy it.

So far, we’ve looked at:

Finally, we saw a small, abandoned rectory on a tiny road, hidden by trees… with no heat, no hot water, no appliances, no lights… not even a place to park your car that wouldn’t have you sinking into the mud.

Falling Through the Floor

This last place was left as it has been for almost 50 years.

There were statues of the Holy Virgin still in their niches. Threadbare carpets lay on the floor… and old moth-eaten blankets on the steel beds. Baptismal certificates hung above the children’s beds. Glasses and plates were stocked in the cupboards.

It is as though the family who lived there went away for the weekend and never came back.

“What happened?” we asked the custodian, Declan, a lanky man of about 60 with a lanky smiling face.

Elizabeth had just stepped on a board in one of the bedrooms. Her heel sunk into the soft wood.

“Worms… They’re flies, actually. They burrow into the wood. You can’t see them. And then the wood turns to dust.

“If it were up to me, I’d tear out all the floors. Otherwise, you never know when you’ll fall through the ceiling down below.”

Declan was smiling broadly; the idea of us falling through the floor seemed to delight him greatly.

“Oh… and as for what happened to the family that lived here. There were four daughters. They were left the house when the parents died. Three of them married and moved away… some to America.”

He spoke in a heavy Cork accent… still smiling, pronouncing each syllable of America carefully.

Propped Up Against a Tree

“The last of the daughters didn’t marry for a long time,” Declan continued.

“She was set to marry the man next door. He was an older man. He had a big house and lots of money.

“But he went out for a walk with his dog. And when the dog came back without him, we knew something was wrong. We found him propped up against a tree. He had shot himself. It was probably his best move at that stage. I knew the woman.

“I would have run away instead. It would have been shameful. But sometimes, that’s the best you can do.

“Besides, you know, the weather here is so wet, I would have moved to Florida. It doesn’t rain in Florida, does it?”

We wanted to set him straight: Yes, it does rain in Florida; and yes, there are ill-tempered shrews there, too.

But he knew that; it wasn’t the truth that Declan was after.

For four decades, he has dreamed of sunny Florida – far from the rain, snow, mud, and cold of Ireland. Perhaps someday, he will find out that it rains in Florida.

Besides, fantasies about the weather 4,000 miles away do no harm.

Delusions about the weather at home, however, can be fatal.

Which is how we segue back to our subject…

The indisputable fact, Dear Reader, is that there are bull markets and bear markets. Unless the authorities have found some way to stop markets from working (which is unlikely), sometime in the future – perhaps now… perhaps later – stock prices will plunge.

They could lose half to three-quarters of their value. And it could take 10 to 20 years for them to recover…

…if they ever do.

Yes, sometimes it rains. We hate to tell you, Dear Reader; but we thought you should know.

Editor’s Note: Just this morning, Bill sent us a brief video of his new home in the Irish countryside. For another look at your editor’s newest “fixer-upper” project below…

January was a rough month for bitcoin investors…

As you can see, bitcoin plunged 28% against the dollar in January – the worst monthly slide in three years. 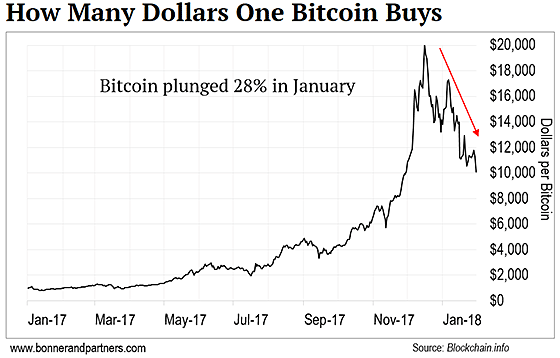 However, investors who exchanged their dollars for bitcoin this time last year are still up 932%.

India Snubs Bitcoin
As Chris Lowe showed above, bitcoin plunged last month. And it could soon get worse for the world’s first cryptocurrency. India’s government announced that it will ban all bitcoin transactions.

A Sign of a Top?
As Bill said, stocks can’t go up forever. Now, a new clue that investor euphoria might be reaching absurd levels: People are sharing their 401(k) balances on social media.

Prepare For an Avalanche
Global stocks continue to march higher. Most investors are celebrating. But Bill Bonner Letter coauthor Dan Denning is sounding the alarm. Today’s market is an avalanche waiting to happen.

In the mailbag, readers respond to Bill’s recent Diary, “What Trump Won’t Say in His Speech Tonight.”

I think Trump said exactly what he wants. Just think that he is F.O.S.

You requested our pardon while you did a little math, with potential interest costs of the national debt, so pardon me while I ask if you were using Irish maths (you write from Portlaw, Republic of Ireland), where 5% of $30 trillion apparently comes to $600 billion. My Irish maths (the Northern Irish variety) has $1.5 billion (and so on for your other debt figure regarding $40 trillion).

Not that I’m the only reader to notice, I hope. And I thoroughly endorse reader Hazel B., who, like me, would appreciate more plan from you than flam, as we are zapped endlessly by many and differing salesmen in your trail.

I doubt that you will address this in your next column, but you have raised several reasons why there is unfair trade protectionism in our trading partners [my responses are in brackets]:

“The foreigners manipulate their currencies [yes, they do]. There’s an overcapacity in the washing machine sector [there is]. Foreign firms pay lower taxes [in some cases, yes]. Foreigners don’t buy our washing machines [due to their own tariffs and other barriers]. Foreigners don’t pay workers enough [absolutely true]. Foreigners don’t have the same environmental protections, zoning restrictions, [very true] or LGBT sensitivities [you brought this in as a mockery]. Foreigners allow children to work [some countries do]… and don’t give you a gluten-free meal selection [this one is just laughable and shows you are not really a serious evaluator].”

Until you show some real objectivity and stop only picking the facts relative to your argument, I will continue to dispense with your evaluations and prognostications.

You had to be raised in Great Britain! On a mission to convert everyone to your way of criticizing how every department of the government is run. Are you included in the meeting discussing all the pros and cons with the available intel? No, you only see early results.

Shouting from the bushes is a UK pastime. Having money doesn’t mean you are right – it just means you have conned a lot of people!

Your logic seems fundamentally sound. This consumer bought an LG washer and dryer based on comparison of features I wanted among all manufacturers. And I own a house full of Whirlpool appliances that I was coerced to buy by Coleman Homes, but would never buy again. I can’t wait until you start on privatized infrastructure and how the winners will be Wall Street.

Will you be joining Bill during the “Legends of Finance Summit” next Thursday?

It’s slated to be one of the biggest events in our company’s history. Bill will be joined by legendary speculator Doug Casey. Together, they’ll show you how the philosophy behind Bill’s “Trade of the Century” helped Doug spot triple-digit speculations… and how you can do the same. Details here. 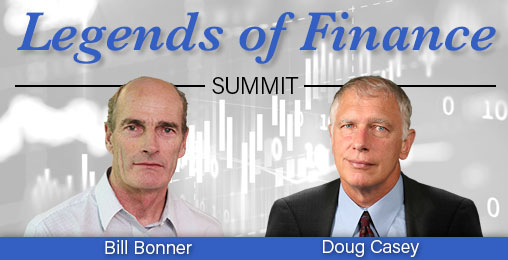