GUALFIN, ARGENTINA – The last two years have been full of absurd distractions. The Mueller Report, for example – one big, fat, waste of time.

So were the trade wars… first with Canada and Mexico… and now with China. Lots of blah, blah… gumming and jawing…

And there was the “taking the knee”… which many people took seriously. And remember Stormy Daniels? And two summits with North Korea?

What was the point? Why the circus?

Let’s look at what is really going on.

First, the Trump administration increased military spending by $190 billion – practically every penny of which went to the insiders in Northern Virginia “defense” industries.

Second, it imposed tariffs on cheap goods from China. A tariff is essentially a tax paid (mostly) by middle-income consumers.

Third, it passed a tax cut, which lowered revenues… even while expenses were still going up.

Fourth, the Trump Team also boosted the federal deficit to a one-month record of $234 billion in February.

That is, more than half of what it spent was borrowed… bringing the annual borrowing total to about a trillion a year – even without a recession.

When a recession comes, the total will soar to $2 trillion, probably sending total government debt to $40 trillion by 2030.

In short, while the public is distracted by the Mueller Report et al., the feds are setting up a hellish catastrophe – with runaway expenses and falling revenues (which we’ll look at more closely anon).

Stephen Moore (Mr. Trump’s choice for the Fed) and other “supply siders” think they have the answer. They believe they can sit around… study their “data”… and come up with tax-and-spend policies needed to stimulate the economy… and grow our way out of the problem.

We went to a luxury hotel yesterday. We took two rooms, including the nicest room in the place. And we had a dinner for four, with two bottles of one of its best wines.

The bill came to 14,282 pesos. Seems like a lot of money. A marketing assistant in Buenos Aires might make over a million pesos per year. A banker expects to bring home several million. The Argentines have added so much stimulus to the economy, prices are doubling every year.

But the hotel owner, the marketing assistant, the banker – are they rich? Not at all. The economy is shrinking at a rate of 6% per year. The whole country is on the edge… holding its breath as it sorts itself out from decades of overspending and excess debt.

But let’s stick with the USA.

Since the beginning of the 21st century, the Fed has added $4 trillion in new money. Plus, it’s been lending money below zero, in real terms, for the last 10 years.

Congress and the White House did their parts, too. The Obama/Trump administrations added some $13 trillion in deficit spending.

You’d think that would be enough to stimulate the economy.

But no. It produced the weakest recovery in history… and an average growth rate of only about half of what it used to be.

What gives? What’s wrong with stimulus?

P.S. One last thing before you go. Some of you might have heard the name Doug Casey.

I needed some used furniture for the National Taxpayers Union office, and he was selling… We became friends almost immediately.

Doug’s an economist gone rogue… and a great speculator focused on the volatile world of resource stocks.

I mention this because when I met with him a couple days ago, he told me he is preparing to sit down for a video presentation to lay out what he sees for 2019. It has the fitting name of “Totally Incorrect: Live.” And if it sounds like the sort of thing you’d be interested in, then you can register to watch it tonight at 8 p.m. by going here.

MARKET INSIGHT: WHAT RATE PAUSES DO TO STOCKS

As you know, the Federal Reserve officially abandoned its rate-hiking cycle this month.

To get a feel for what we can expect in the markets going forward, we are turning to history.

The last two times the Fed halted rate-hikes were in January 2001 and September 2007.

Today’s chart maps the performance of gold and the S&P 500 in the 12 months following the end of those rate-hiking cycles. 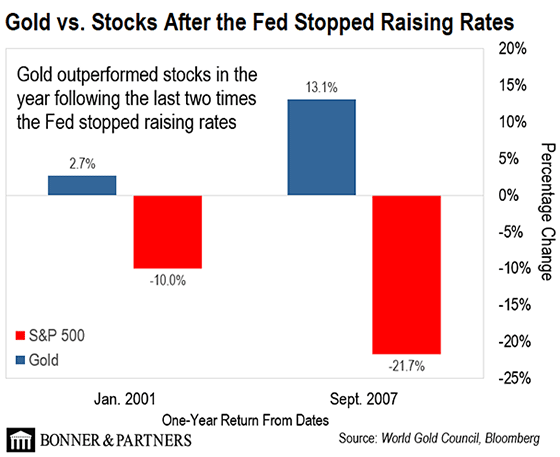 As you can see, gold gained 2.7% and 13.1% in the 12 months following the last two times the Fed stopped raising rates.

In comparison, stocks tanked on both occasions. The S&P fell 10% and 21.7% in the year following the end of the previous two rate-hiking cycles.

Remember, the Fed tends to pause rate hikes when it believes tougher economic times are ahead. And that’s precisely what happened shortly after the last two rate pauses. The U.S. entered a recession in March of 2001 and December of 2007.

There’s no guarantee the future will be like the past… But if history rhymes, now is the time to move out of stocks and into gold.

Why Trump May Choose Moore
As Bill said yesterday, Trump has found his “stimulus guy” in potential Fed nominee, Stephen Moore. And the media has gone nuts. How could a man so “unqualified” be picked to serve on the Federal Reserve Board? Well, it may have something to do with Trump’s 2020 reelection campaign…

If You’ve Stayed at an Airbnb, You May Have Been Watched…
Vacation rental company, Airbnb, has a hidden-camera problem. The company allows cameras outdoors and in common areas, but its seemingly lax privacy control hasn’t stopped hosts from recording guests in bedrooms and bathrooms. And it seems like it’s only going to get worse…

Today, readers touch on a couple of hot topics: Trump and Fed chair Powell. One dear reader even suggests a solution for the “resurgence of a free American society”…

The fundamentals assure that there will be a horrendous financial collapse. Most likely that will be disastrous for the U.S., but a determined citizenry acting through government could remedy the situation as follows: Sell off national assets such as shipping ports, airports, large swaths of agricultural lands, mining and forestry rights, etc., in order to buy enough gold (and silver) to institute a sound redeemable money system independent of government… Cancel all existing laws, charters, regulations, etc., and start out with just two laws, i.e., 1) Do all that you promise to do (contractual law), and 2) Do not encroach upon the property or person of others (courtesy of Richard J. Maybury). This, incidentally, would eliminate the central bank system – reestablish the sound practice of capitalism with a level playing field for all.

I appreciate your depth of knowledge, forthright, insightful, and realistic analysis of fact, and your intellect that supports this. Though it is important to understand the reality of our circumstances, a proposal of solution to our problems is what really matters. It does not matter that the venerated experts predict that the coming crisis will see America sink into the swamp of a new dark age. What matters is that it is possible to avoid this scenario. Damn the experts. No one has the final word on anything.

Powell is caving in because his boss is making threats and naming him, like he does all the time. This day and age, no one needs a Federal Reserve. The folks who get its benefits are the ones who had started this disease a very long time ago! Those are the only ones who are getting all its benefits. I will say abolish the Federal Reserve, now!

Why don’t you guys start a movement? Ask the question and pursue it: Who should be held responsible for wasting the millions of dollars wasted by the DNC [Democratic National Committee] for the special investigation of Trump’s alleged “collusion” with the Russians! The DNC should pay the money back and the monies would go toward The Wall!

I just read Doug Casey’s commentary on AOC. To say she is stupid and ignorant is putting it nicely. My impression of her is that she is an ambition-driven moron, who strives to be in the public eye by being a total pain in the ass to anyone who values capitalism and the hard work it takes to get to the top. Because someone was willing to work 60-70 hours a week to make his business successful, he should be punished? Let’s take away money from the rich to give to the lazy? Not all poor people are lazy. I have been flat broke before, due to macroeconomic conditions beyond my control. I understand how that can happen.

For this reason, I think that the welfare system needs to evaluate people’s situations thoroughly on a case-by-case basis. To simply give everyone a guaranteed income of $1,000 a month is ludicrous. Who pays for that? If AOC really wants to make a name for herself, she should put forward a plan that can take care of the people who truly need a temporary hand up, and not something that will destroy capitalism and our country with it. She needs to quit making noise and get down to real work that makes sense and is effective.

If you’re easily offended, do NOT attend this event.

Legendary speculator Doug Casey is laying it all on the line: What takes down President Trump… the crashing of the “everything bubble”… and how civil unrest comes to America.

This all happens tonight at 8 p.m. ET, during the world premiere event of Totally Incorrect: LIVE.

These are bold predictions. But nobody ever accused Doug of being a timid man. See for yourself right here. 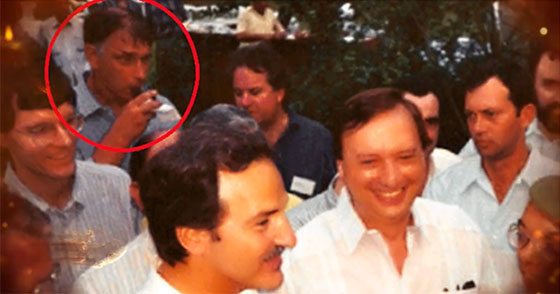