PARIS – It snowed all day yesterday. It is still snowing this morning.

Paris is at its best in the snow. It is hushed and enchanting… like a beautiful woman who is about to tell a secret.

Bill shares a picture of Paris in the snow

Last Sunday, we went to mass in a little church in a small town out in the French countryside.

As the priest delivered his sermon on the importance of following in the footsteps of Christ, we noticed two plaques on the wall – similar to those you see all over France.

“To Our Heroes” was the inscription on top. Below was a long list of names of the young men killed in the Great War of 1914 to 1918.

But what most impressed us was the number of names. Cassat. Cassares. Catillion. Etc., etc.

Where did they all come from? we wondered. And what must have happened to the village when so many of its young men were dead?

Who cut the hay? Who courted the young women? Who put on the white collar and joined the church?

And how could civilized Edwardian Europeans get caught up in such a desperately dumb war… and not stop killing each other until 16 million were dead?

The question haunts us. We return to it over and over. What is it that makes humans do things that – at least, when viewed from a distance – are obviously self-destructive?

The markets were noisy yesterday. A third day of wildly gyrating prices left stocks and bonds in retreat… as the financial press shouted out its outsized fears… and its calming little lies.

This morning, we’re beginning to see some green figures again. Tokyo and London are up slightly.

We still don’t know whether this will turn into the major plunge we anticipated. But already, it has delivered a message: Watch out!

We’re not the only ones who are worried. Bloomberg caught up with billionaire investor Carl Icahn:

“Passive investing is the bubble right now, and that’s a great danger,” he said.

“When you start using the market as a casino, that’s a huge mistake,” he added.

Eventually, Icahn reckons, the bubble will implode and lead to a crisis bigger than in 2009.

Who turned the market into a casino?

Alan Greenspan, Ben Bernanke, and Janet Yellen at the Fed.

They made fake money too cheap for too long. And each time markets tried to correct – in 1987, 2000, and 2008 – they doubled down on their mistakes, bringing even more hot money into the casino.

Readers often accuse us of “criticizing” the president… or Congress… or the Fed – while never offering any constructive solutions.

If we ever come up with any solutions at all, you can be sure they are completely unworkable and offered in the spirit of mischief.

And we wish to assure all our dear readers: We did not vote for Hillary or Trump.

We don’t vote for the same reason we don’t criticize and don’t offer solutions. Once you take sides, you can’t see clearly. You become part of the thing you’re trying to observe.

When you have a dog in the fight, you care about the outcome… and you see his teeth drawing blood every time the dust clears.

That is the trouble with partisan politics.

If you pay attention… you begin to care. You begin to think it is all a matter of one team against another.

Red vs. blue. Conservative vs. Liberal. Them vs. Us. You either win… or you lose. So you naturally focus your emotional and intellectual energy on winning…

Reserved and intelligent voices may tell you why the fight is not worth it… why there are more important things at stake… and why a war will bankrupt the nation, destroy the government, and kill off its young men.

But once the cannons begin to boom, the wise voices fall silent… You think only of victory. Or survival.

MARKET INSIGHT: THE FIRST ACT OF THE MARKET DRAMA

In January, Bill published an “extreme warning” about the stock market in his daily Diary. Loathe to run the “crash flag” up the pole again (it’s in tatters), he nonetheless pointed out that the same metrics which told us to warn investors of a crash in 2000 and 2007 are telling us the same thing now.

No, that doesn’t mean past performance guarantees future results. Or that history must repeat. Or that the future isn’t important. We all know – and I have been reminded by more than one colleague – that future earnings matter more than trailing earnings. The past isn’t necessarily a prologue.

But the past is still useful in understanding why markets behave the way they do, and what they might do next. I mention this because it’s become vogue to say that the past doesn’t matter at all. Or that the people who say it does are stuck in the past. Markets, you may have been scolded, are “forward-looking” at prices that reflect what investors expect to happen in the future.

All of that is true. But it doesn’t mean the future will be completely different from the past. In my experience, people argue that the past doesn’t matter because they want to justify a decision that otherwise doesn’t make sense (buying overpriced stocks). The louder they are, the more confident they get, and the more they disparage the voice of experience, the closer you are to a bear market.

Let’s look at one measure of recent confidence/recklessness/euphoria; this one measures volatility. 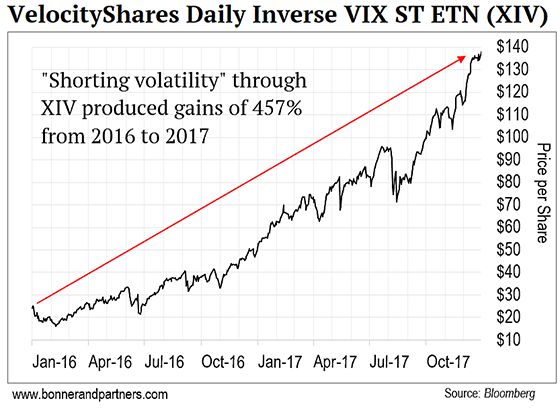 There’s no point in getting into precisely how the VelocityShares Daily Inverse VIX Short-Term ETN (XIV) works. But suffice it to say that it shows the inverse of the S&P 500 VIX Short-Term Futures Index. Volatility goes down, XIV goes up, and vice versa.

I showed this chart to readers of The Bill Bonner Letter last month. The chart shows how some traders could have made 457% in two years by being “short” volatility. If you had the stomach (or the lack of brains), the “short volatility” trade has been good the last few years.

But that all changed this week. Here’s what XIV did after the market dropped on Monday: 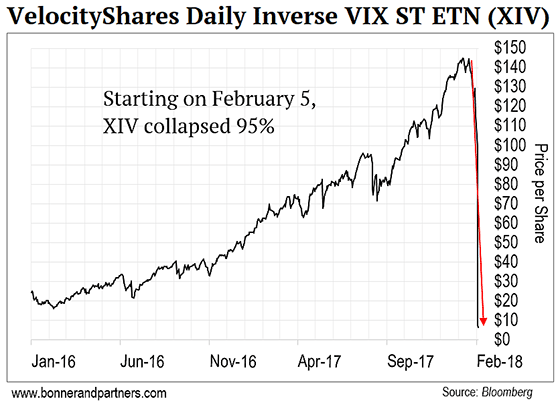 After climbing 457% for the past two years, XIV plummeted 95% in two days.

XIV’s demise came on the back of an announcement that Credit Suisse would terminate the once-popular XIV later this month.

Anybody who has been “selling volatility” over the past few years through XIV is now completely wiped out.

The liquidation of the XIV trade may deliver the 10% correction everyone seems to expect. But it’s also exposed what Bill’s been pointing out for the last year or so: The bull market and the entire economy are much more fragile than you might think.

What I have been telling readers of The Bill Bonner Letter is that this is no garden-variety crash we’re expecting. We’ve taken the position that it’s more important to protect the money you already have than to take a reckless risk chasing more gains in an overvalued market.

Act one has begun. The main event is still to come.

Editor’s Note: In January, Dan warned readers of The Bill Bonner Letter that the “short volatility” trade would prove to be a costly mistake. That’s precisely what happened. But Bill and Dan believe an even bigger correction is approaching. Bill has prepared a “field memo” to help readers prepare. Details here.

Trump’s Response to Monday’s Fall
Donald Trump has often used the climbing stock market to justify the strength of the economy. But as Chris Lowe showed yesterday, one-third of the stock market gains since Trump’s election have been wiped out. Here’s how the president is responding.

Prepare for More Cryptos to Hit Zero
Bitcoin, the world’s first cryptocurrency, has been plummeting. But it’s not just bitcoin. The entire crypto market has been falling. Now, one of America’s biggest banks is warning investors to prepare for some cryptocurrencies to hit $0.

Why the Crypto Crash is Temporary
Jeff Brown, Bill’s top technology analyst, isn’t worried about the crypto market meltdown. In fact, he predicted it months ago. Here’s why Jeff believes cryptocurrencies are headed for a rebound.

In the mailbag, the criticisms that Bill mentioned above…

This is disgusting, period. And it smells like crap and a sleight of hand. Please take me off your subscriber list. You’re too anti-Trump for me. In fact, my soul tells me there’s nothing but greed pouring out of your site.

I feel you protest too much about Trump. We, long ago, passed the point of no return on debt. Obama, the progressive Marxist, saw to that.

We only had an Obama carry-forward (Clinton), or Trump, with his irritating social, but not Marxist, activities. The voter choice was limited.

Meanwhile, the recent market drop has been weighing heavily on readers…

Those on TV say that this, too, shall pass, and we will continue much higher. I’m confused, and sitting on a load of cash, wondering if this is the right approach! I’m with you. Whatever. You make the most sense. However, those over at Stansberry say we’ll still have a melt-up with several corrections along the way. Ouch!

It would be nice to have some comments/updates from Bill’s son concerning bitcoin and cryptocurrencies.

What can the average investor do? I read your column and believe the market will crash. Which of your publications should I purchase to see how to protect myself? Do you have any consultants that work with individuals?

Editor’s Note: As publishers, we are not allowed to offer personalized investment advice. However, Bill, along with coauthor Dan Denning (featured in today’s Market Insight above), pen The Bill Bonner Letter. Together, they have been telling readers of the fragile nature of today’s market, and showing them ways to protect and grow their wealth through difficult times. Learn more here.

Have you reserved your spot for tomorrow?

The “Legends of Finance Summit” will be one of the biggest online events our company has ever hosted. Bill, along with legendary speculator Doug Casey, will reveal how the strategy behind his “Trade of the Century” has delivered Doug huge gains. See how the strategy can work for any investor by signing up here. 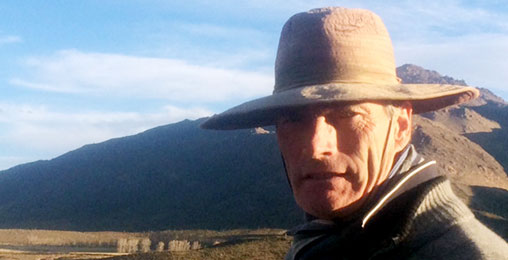