Meanwhile, bitcoin tumbled toward $8,000, wiping about $100 billion off its market value in just 24 hours.

And the price of the 10-year Treasury note dived, driving up its yield to above the 2.75% mark.

On a $200,000 mortgage, that comes to about the same amount as the savings promised in the tax cut.

The feds giveth; the feds taketh away…

…and the feds maketh a mess of things.

They have engineered a grotesquely exaggerated credit cycle – holding short-term interest rates below the rate of inflation for far too long.

They’ve been giving out free money, in other words.

Now they have an economy burdened by far too much debt… just as the credit cycle turns.

To be more precise, a one-basis point increase in carrying costs would add $6.7 billion to the nation’s annual interest rate charge.

In Tuesday’s Diary, we looked at how the U.S. government is going to be in a world of hurt when interest rates rise to a modest 5%.

We said it would add $600 billion to the cost of carrying $30 trillion of debt, which is the expected government debt level within 10 years.

A dear reader wrote in to wonder where we went to school. If all the $30 trillion yielded 5%, it would be a total extra annual interest charge of $1.5 trillion, not $600 billion. If the dear reader is right, the situation is even worse than we thought.

The feds collect about $3.5 trillion in tax revenue. So you can see why paying so much interest would be out of the question.

But that’s just the beginning. When trouble comes, it rarely comes alone.

Instead, like a gang of Baltimore teenagers, rising interest rates will bring a whole coven of noxious problems.

In raw numbers, the economy is no better today than it was under President Obama.

The growth rates are about the same. But stocks stand at the top of a rickety ladder… and debt levels are shooting higher.

The government’s own number crunchers in the Congressional Budget Office warn that federal spending increases and tax cuts will drain the Treasury of cash by sometime in March.

And the feds are already on schedule to issue $1.3 trillion of bonds in just nine months.

But who will buy them?

Not the Fed: It is expected to continue its “quantitative tightening” (letting the bonds on its balance sheet shrink, not buying more)… at least until the ladder falls over.

And not consumers: They don’t have any money.

The only reason we have any growth at all is because consumers are willing to sacrifice their financial safety.

Instead of saving, they spend. The spending shows up on the positive side of the GDP ledger.

And the additional debt they’re taking on doesn’t show up at all.

But that doesn’t mean it doesn’t exist. Household debt is back up to a new record – over $15 trillion.

It’s been growing twice as fast as wages for the last 30 years. Now, every 1% point increase in interest rates – were it applied to the outstanding amount – would result in $150 billion of extra debt service costs.

And here’s where the math gets a little harder…

There are about 120 million households in the U.S. That’s an extra average cost per household of about $1,250 a year.

Where would the average American family get the money?

Its savings have been drawn down to keep the economy moving forward. Disposable income less personal outlays – savings – fell to 2.4% in the latest tally.

That’s the lowest level since 2005. And it leaves most households completely unprepared to deal with a financial setback.

Here’s WolfStreet.com with a look at the state of America’s households [figures from the Fed]:

Oh, not to worry… the tax cut will put $1,000 into the average household’s pocket.

But interest charges and inflation will take it back when they’re not looking!

Editor’s Note: Yesterday, Bill introduced readers to his new Irish home. Today, he shares a picture of the north side of the house.

Bill’s new home is a fixer-upper

MARKET INSIGHT: HOW TO SPOT A CRYPTO SCAM

By Jeff Brown, Editor, The Near Future Report

I saw them at every cryptocurrency conference I attended…

But I took one look at the digital token they were promoting and knew it was a fraud.

The company I’m referring to is BitConnect. The digital token associated with the company trades under the crypto ticker BCC.

BitConnect marketed itself as a cryptocurrency exchange and lending platform.

Impressive returns… but I didn’t recommend it to my readers. In fact, in November 2017, I explicitly recommended that my readers NEVER buy BitConnect.

You see, BitConnect would invite people to trade their bitcoins for BitConnect coins. The company would then turn around and lend the coins out with the investors collecting interest.

When digging deeper into the frequently asked questions on the website, I discovered information concerning the “BitConnect Investment Opportunity.” Here, you can read that “the moment you acquire BitConnect Coin, it becomes an interest-bearing asset with up to 120% return per year through PoS minting.”

I told my readers in November, “This is the equivalent of a Ponzi scheme, short and simple.”

I’m happy I warned readers to steer clear. Because just last month, the predictable happened: The bottom fell out.

Take a look at the updated chart below. 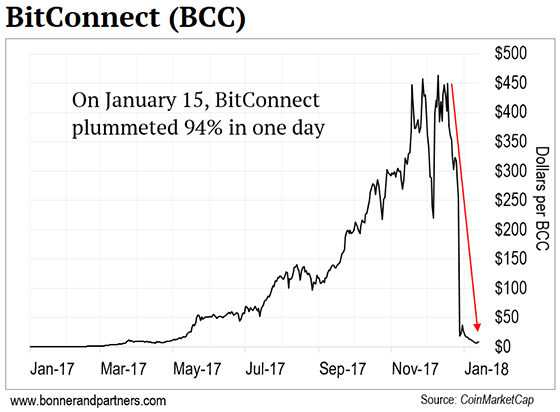 From its peak of $2.8 billion, the BitConnect market cap sank to $62 million, erasing more than $2.7 billion in wealth.

Anyone who has been holding a large amount of BCC has been completely wiped out. To have made money off of this Ponzi scheme, an investor would have needed ridiculously good timing within just a six-month window.

At writing, there are two class-action lawsuits pending against BitConnect. The company’s assets have been frozen.

When investing in cryptocurrencies, digital tokens, and initial coin offerings, it’s essential that investors perform due diligence to eliminate the risk of investing in projects that have obvious red flags with the potential for outright fraud like BitConnect.

Without doing so, investors are just gambling, almost asking to lose all of their money.

Yet by performing the necessary analysis, investors can ensure that their investments are educated speculations in solid projects that have the potential for tens of thousands of percent returns.

P.S. Smart investors have the potential to make 21 times their money in cryptocurrency technology over the next few years. But as you’ve seen, investing blindly can be dangerous. I’ve made it my mission to show my readers how to profit safely from the cryptocurrency explosion while avoiding landmines like BitConnect. Get all the details right here.

Good News for Trump’s Infrastructure Plan
Trump announced that he wants a $1.5 trillion infrastructure plan. The question is… where will the money come from? Now, a powerful interest group might have a plan.

Bitcoin Bloodbath Gets Worse
Yesterday, Chris Lowe showed that bitcoin was falling fast. In 24 hours, the situation has only gotten worse. Bitcoin is now down more than 50% from its December 2017 peak.

Shots Fired in Switzerland
At the world economic forum in Davos, the world’s wealthiest recently celebrated record stock gains. But Dan Denning, The Bill Bonner Letter coauthor, shows why world stocks are headed for a fall.

In the mailbag, the “washing machine war“ continues to draw discussion…

Don’t let your hatred of all things Trump blind you to the bigger picture of this “washing machine war.” Trump applied the tariffs to Chinese manufacturers only. No hassle to South Korean, Vietnamese, Mexican, etc. suppliers. And China is a very small percentage player.

So… why only China? Maybe it’s part of a bigger picture about trying to get China to play better ball in the far bigger concern called North Korea. More often than not, folks realize, a lot of presidential moves are made to “signal” something to someone, and not for what the surface reason appears to suggest.

I have learned not to accept at face value everything that I read, but to ask questions about things that don’t seem to be addressed. I understand your point about how trade restrictions can harm consumers. But here is my question: What if those things you mentioned, such as devaluation of currencies, lower wages, etc., in other countries are true?

And suppose those advantages cause the manufacturing of washing machines (in this example) to cease entirely in the U.S. Are you saying that you would be okay with that, or that consumers should be okay with that? Of course, the same question applies to other industries that might be similarly affected. And it also applies to any downstream industries related to the manufacture of washing machines.

I disagree with your take on this. You say a letter addressed to the Diary from a dear reader in Australia tells us that “the price of hooking up solar power Down Under is only half of what it is in the U.S.” Tesla 2 Powerwall sells in the U.S. for 3.5K and in Australia for 10K. Most everything you buy in the U.S. is more than 50% cheaper than in Australia.

I own property there and spend months there every year. But if one is not a victim, you do your own shopping around the globe and go directly to where things are made; you take your pick. I ran a number of businesses and buying from your overseas contacts, you have hundreds of percent markup on what the Australian or U.S. retailers are selling to the public and crying poor mouth.

Right on, Bill. I’ve added it to my “Bill Bonner Wisdom” file. Canada has the same problem with our monopoly system for dairy, chicken, and turkey farmers – supply management and sustained very high tariffs (up to 300%), resulting in limited choice and lack of innovation leading to inefficient production, and very high prices by world standards. The beef and pork farmers – who have no supply management – seem to do just fine and are very competitive when it comes to export markets, in which they are thriving.

Meanwhile, Bill’s update from the Irish countryside is on readers’ minds:

What happened to the woman, not the future husband who shot himself? Thank you.

I must tell you, you crack me up! I laughed almost all the way through your Diary that you sent. You are a very funny guy – and I mean that in a positive way! You managed to take the picture of the house ascended on an angel – very appropriate. I was falling off my chair!!! Seriously, you’re “spot-on” with your observations on the (so-called) economy and the “Swamp creatures” that are destroying the world!!! Thanks for the great insight and understanding of the situation.

We’re less than a week away from the “Legends of Finance Summit.”

At this free event, Bill will be joined by legendary speculator Doug Casey. Together, they’ll show readers the strategy behind Bill’s “Trade of the Century,” and reveal how readers can use it to land triple-digit gains. Reserve your spot here. 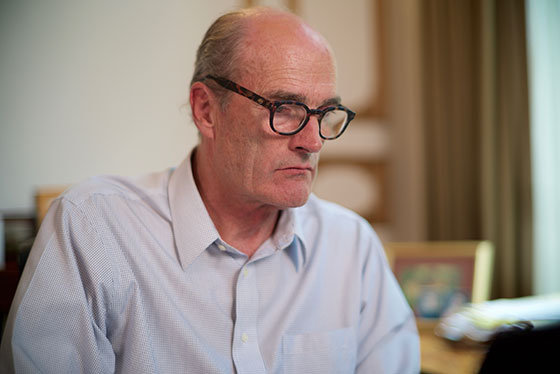