I’ve got so much honey

You know the bees envy me

I’ve got a sweeter song

Oh, than the birds in the trees

I know what you’re gonna say

What, what could make me feel this way?

Talkin’ about my love, my love

– “My Girl,” The Temptations

YOUGHAL, IRELAND – The future seems to be coming faster than we thought.

And it is largely thanks to “My Girl,” as former chief White House strategist Steve Bannon called Janet Louise Yellen.

Ms. Yellen left her post as Fed chief earlier this month, sent on her way with wide smiles and enthusiastic felicitations.

Yes, it is Valentine’s Day. Love is in the air. And here at the Diary, we love the comedy team at the Fed that has given us so many hours of entertainment.

Last week, we set out a series of future headlines – guessing what might be coming.

Recall where they led: a monumental blow up of the U.S. economy and its financial system.

This week, the Trump administration, Republicans, and Democrats seem to be doing their best to make our mock headlines come true.

Our general theory is that Congress and the White House will pick up where the Fed Team left off.

Like a tag team wraslin’ duo, the Fed has pummeled the economy badly. Now, the Blond Bombshell enters the ring… intent on delivering a body slam.

Since 2009, the Fed has added about $3.6 trillion in QE “honey” to the nation’s finances (by buying government bonds with newly created cash).

And it slashed interest rates until it hit the “zero bound.”

That is what boosted stock and bond prices – and debt – to the highest levels ever seen.

And from the incoming Fed chief, Jerome Powell, came the kind of reassurance you’d expect.

Later in the day, it added:

Federal Reserve Chairman Jerome Powell suggested that the U.S. central bank would push ahead with gradual interest-rate increases… even as it remains on the lookout for threats to the financial system in the wake of the recent stock market rout.

We almost doubled over in laughter. Powell really is out of it. Just like Yellen. And Bernanke. The clear and present danger to the financial system is him.

And what’s the point of being “on the lookout” if you can’t do anything?

It used all but 100 of them (short-term rates fell to 1%) trying to get the economy back into full retard/borrow-your-way-to-bankruptcy mode.

Then, in 2007, when the last credit crisis began, the Fed had 527 basis points it could cut. It used almost every one of them. And it barely got the job done.

Cutting rates by 500 basis points in less than a year… and adding $3.6 trillion in QE cash… it still produced the weakest recovery ever.

Today, it has only 142 basis points available to cut. And thanks to the aforementioned “My Girl” and her predecessors, the economy, and the markets are more vulnerable than ever.

There’s more debt. Stock and bond prices are higher than ever before. In the next crisis, the puny reserves now available to the Fed will not be nearly enough.

So the Fed is busily trying to stockpile interest rates – hiking them to a more “normal” level so it will have some room to maneuver in the next crisis.

But the more it pushes up rates… the sooner the day of reckoning will arrive.

Come the next financial crisis, Americans might just as well call the fire department as Jerome Powell. Neither will have any idea what caused the problem or how to fix it.

The latest budget proposal from the White House would add $7.1 trillion to the 10-year deficit outlook, roughly doubling the previous projection.

Here is The Wall Street Journal with more detail:

President Donald Trump’s budget request, an annual document that outlines an administration’s priorities, would widen the federal budget deficit to $984 billion in the next fiscal year, nearly double what last year’s budget estimated for 2019. And it projects the government will collect less federal revenue over the next decade than it forecast last year, a result of the $1.5 trillion tax cut enacted in December.

One big difference from last year’s budget proposal is that Mr. Trump has given up, for now, on balancing the budget over the next decade, following the tax overhaul and a two-year budget deal that analysts estimate will push the deficit above $1 trillion next year.

But it is not just the amounts that are breathtaking; it’s the context, too.

This budget proposal comes from a Republican president, faced with neither war, nor recession, nor financial emergency.

It comes also at the late stage of a business cycle… with unemployment about as low as it ever gets, stock and bond prices near record highs, and inflation already making a comeback.

And it is being considered by a Congress in which Republicans control both houses.

You’d think Republicans would want to take advantage of this economic and political sweet spot to finally fulfill their long-standing campaign promises to cut the budget, “drain the Swamp,” and eliminate the deficits.

Instead, the cronies are popping champagne corks in Northern Virginia… and raising a glass to “My Girl” coast to coast.

As Bill reports, Washington is on its way to trillion-dollar deficits…

It tracks annual federal budget deficits going back to 1971, when President Nixon took the dollar off gold. 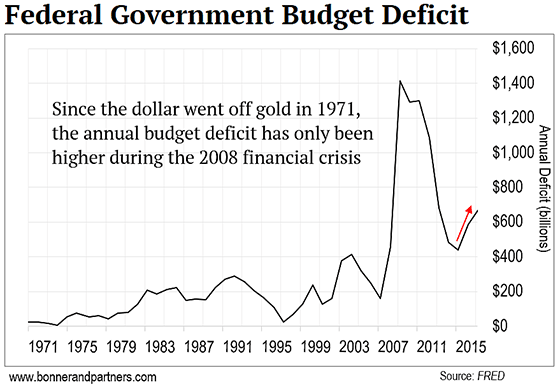 As you can see, the only other time the budget deficit got this high was during the 2007–08 crisis, when it peaked at $1.4 trillion.

The only other time we even came close was in the wake of the dot-com bust.

Prepare for Another Drop
Early last week, stocks experienced a sharp decline. The market has since recovered most of that ground. But the coast isn’t clear, and one high-profile money manager is expecting another drop by March.

We’re Getting a Divorce… Who Keeps the Crypto?
Divorce is never a happy experience. Couples sometimes fight over who gets to keep what. In the UK, a couple is fighting over an $800,000 cryptocurrency treasure chest.

In the mailbag, one reader is thankful for Chris Mayer’s Saturday Diary after a volatile week in stocks…

Dear Chris, thank you very much for your very interesting write-up, including the three points of advice to handle catastrophes.

Meanwhile, well wishes for Bill and his new Irish home:

Hi Bill, good luck with your latest purchase in Ireland. I’m originally from there – Galway. The house looks like it has the makings of a nice home, and I’m sure it’s going to be a fun project. I enjoy your stories and also your advice. Keep the adventure going. All the best ☘.

The very best of Irish luck in your new home in Waterford. I’m from Limerick, but work in Saudi Arabia. I look forward to going back to Ireland every three months for a couple of weeks. Enjoy the craic over there. I’m sure you’ll feel at home in that neck of the woods. Best regards.

President Trump just completed his first year in office. And there’s already talk about whether the president will run for another term.

But according to our colleagues at Casey Research, Trump will fail in 2020 unless he can accomplish this one task. 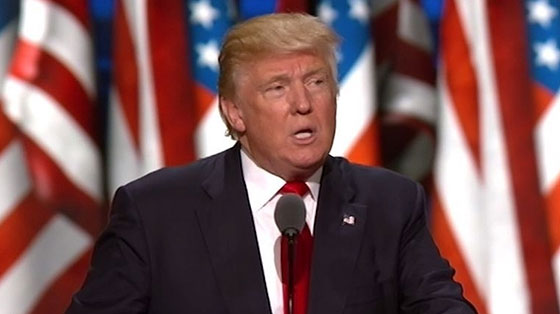