DUBLIN – We’re in Dublin… en route to the USA for the holidays.

Dublin is a vibrant, lively city. Not especially elegant, unlike Paris… and not especially dynamic, unlike London… Nor is it especially huge and imposing, like New York or Chicago.

Instead, it is a comfortable, charming, livable place… with many restaurants, hotels, and bars where you can pass an agreeable hour in front of a fire while drinking a pint of Guinness.

But let’s turn to our beat – money.

The feds and their cronies were among the major beneficiaries of the fake money system and the unfairness at its heart.

Their stocks, bonds, real estate, options, bonuses, and salaries rose… while the common man’s chief asset – his time – fell in value. Our guess is that when the next crisis comes, the feds will take desperate measures to protect their ill-gotten gains.

Among the many spectres haunting us today is the ghost of one of them – digital money.

A single bitcoin was last changing hands at $5,545.08, down 1.5% since Wednesday at 5 p.m. Eastern Time on the Kraken cryptocurrency exchange. Earlier in the session, bitcoin hit $5,263.20, its lowest level in more than a year. Over the past 24 hours the total value of all cryptocurrencies has lost more than $30 billion to a one-year low of $181 billion, according to data from CoinMarketCap.

What set off the sellers is, of course, unknown.

But the day before, Ms. Lagarde had given a speech in Singapore. The former Holton-Arms student and present Deep State insider suprema suggested that central banks should get into the cryptocurrency business, too. Not as buyers of cryptos, but as sellers of their own digital currencies:

For their part, cryptocurrencies seek to anchor trust in technology. So long as they are transparent – and if you are tech savvy – you might trust their services.

Still, I am not entirely convinced. Proper regulation of these entities will remain a pillar of trust.

Should we go further? Beyond regulation, should the state remain an active player in the market for money? Should it fill the void left by the retreat of cash?

Let me be more specific: should central banks issue a new digital form of money? […]

Technology will change, and so must we. Lest we remain the last leaf on a dead branch, the others having decided to fly with the wind.

In the world of Fintech, we need to harness change so it is fair, safe, efficient, and dynamic.

Amid the politically correct blah-blah was a warning to the crypto industry: we can do this too. And better.

Governments have always controlled two things: the military and the money.

With the former as with the latter, their control is never complete. Popular generals go over to the enemy (Benedict Arnold… Charles de Gaulle…) or attempt coups d’état (Sulla… Caesar… Napoleon). In 1990 alone, there were eight failed military coup attempts worldwide…

And money, too, is submissive to the feds… but only to a point. In Zimbabwe 10 years ago, for example, the government declared the Zim dollar to be lawful money… and it made the currency available by the truckload. But nobody wanted it.

In our panel discussion in Kilkenny last weekend, we touched on why money lends itself to disruption… digitization… and government manipulation.

“Money is just information. But it’s important information. It tells us how much of a claim we have on other peoples’ stuff – their time, their resources, and their output. As T. Boone Pickens once said, ‘It’s how we keep score in life.’”

In the U.S., as always, the counterfeit claim tickets went to the rich, the elite, and the insiders.

Dear readers will see how easy it would be for the feds to introduce a form of digital money. For all intents and purposes, our money is already digital. But cash is available and can be used as needed.

In Argentina, until recently, whenever you did a transaction, you showed up with wads of cash. Even when buying and selling million-dollar properties, people came with paper bags (so as not to arouse suspicion) full of dollars.

They didn’t trust banks. And the government had put in place exchange controls to prevent people from moving money around.

The result was an elaborate confusion wherein everyone had to calculate prices in “legal” pesos, illegal pesos, and dollars… and arrange to transfer part of the purchase price above the table… and part below.

As long as you had access to cash, you could still do business – and defy the government.

And, of course, the Argentine feds wanted to buy and sell, too. And they didn’t want to shut down the economy completely.

So they made exceptions… and tolerated many things they had declared illegal. At one point, they even posted policemen out in front of outlawed money-changers to make the prohibited transfers safer.

Cash is hard for governments to control. And next-to-impossible to track. A digital currency emitted by a central bank, on the other hand, would make it easy.

And by forcing you to keep your money in an account at the central bank, the feds would be able to control your money… and how you spend it.

And control you, too.

Editor’s Note: Earlier this year, Dan Denning, Bill’s coauthor on The Bill Bonner Letter, published a new book, The Oath to Save America. Chapter three is titled, “The Assassination of Bitcoin.” In that chapter, Dan predicts why a central authority like the IMF would likely issue its own digital currency, and what it could mean for your financial independence…

Bill Bonner Letter readers are invited to read a free electronic copy here. And if you’re not a subscriber, consider joining Bill and Dan by going right here.

Earlier this year, the Supreme Court issued a landmark ruling. And in turn, opened up the floodgates to a multibillion-dollar industry overnight.

As of May 14, all 50 U.S. states now have the power to license, regulate, and tax sports betting within their borders.

And states are already stampeding to go all-in on the sports betting rush. Just weeks after the decision, Delaware became the first state to launch a full-scale sports operation under the new ruling. It took in over $7 million in sports bets in the first three weeks.

New Jersey launched legal sports betting on June 14. Through the first 17 days, it took in over $16.4 million in bets.

And this is just the beginning…

Last year, sports fans bet an estimated $10 billion on the NCAA Final Four. They bet upwards of $5 billion on the Super Bowl. Add in 16 regular-season NFL games, a full MLB season, hockey, and prop bets on everything you can imagine… and the total amount wagered on sports was well in excess of $100 billion.

Keep in mind, that’s a rough estimate. Until the first legal sportsbook opened in June, sports betting outside of Nevada required finding a bookie to take your bet.

Even while it was largely illegal, 57% of sports fans surveyed admitted to placing at least one sports bet.

That number climbs to 70% when you add in those who haven’t placed a bet but would like to. 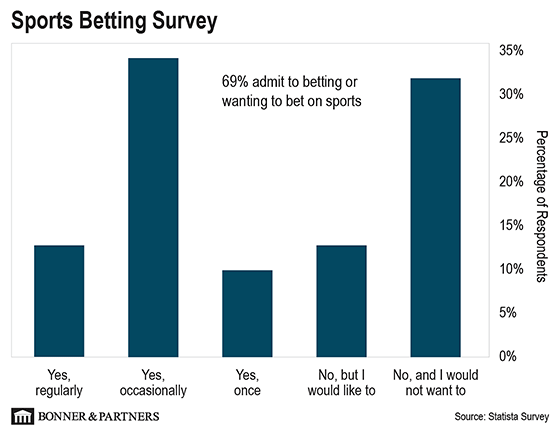 Whenever we see a once-illegal market step into the mainstream, the entire market has to readjust. Entirely new companies are created. Stocks soar. Early investors can make a fortune.

Just consider in 2016, the illegal cannabis market in the U.S. was estimated to be worth about $46 billion. But with pro-cannabis legislation sweeping the country, the legal pot market is forecast to reach $146 billion by 2025. That’s more than a 200% increase.

That’s the sort of opportunity we have today.

I’m currently penning a special guest essay on this topic for Diary readers. Check your inboxes tomorrow morning for that story.

P.S. With the ban on sports betting in the U.S. now gone, you may be tempted to go out and buy stocks in the biggest Las Vegas casinos. I’d encourage you not to do that. That’s because the Vegas casinos won’t benefit from this new ruling. In fact, it could even harm them.

“Work Is Already Underway”
As Bill reported above, IMF chief Christine Lagarde recently spoke on the possibility of a central bank-backed cryptocurrency. And according to this speech from Benoît Cœuré, chair of the Committee on Payments and Market Infrastructures of the Bank for International Settlements, work is “already underway” on issuing these bank-backed cryptos.

Powell May Be Backing Down
Jerome Powell, chair of the Federal Reserve, has so far been steadfast in his pursuit of “tighter” money. Powell has already hiked rates three times this year. But now, the Fed chair may be backing down. Here’s why tighter money could be put on hold in 2019…

In the mailbag, dear readers consider the warning from Alan “Bubbles” Greenspan…

Fascinating but chilling exposé of the greed and evil in government. I earned Social Security benefits by paying ever-increasing taxes for 45 years – and I won’t be able to get them now that I’m retired?!

This is how so many feel, but they are afraid to talk about it out loud for fear of who might be listening. Everyone needs to know – they will when the time is right.

Don’t you just love deficit spending? Nothing like a tax that gets paid for with the falling value of the dollar that nobody understands why. Government doesn’t pay interest on its debt, by the way. It issues more debt and prints more money to supposedly pay interest. The interest it pays only determines who pays the tax. When interest rates are low, the debtholders pay.

Oh, and if you supposedly make a gain in numbers on any of this, you get to give part of that back too – another tax.

Meanwhile, a disagreement on POTUS. Is Trump trying to drain the Swamp? Or is he a “con artist?”

I happen to like President Trump. At least he is trying his best to “drain the Swamp.” We have been putting up with a Do-Nothing Congress, and frankly, our past presidents did not do well, as far as I am concerned.

I cannot believe there are some who read your letter and still believe so strongly in our big-brained, everything-bigger-and-better-than-ever-before con artist. You explain the fake money system, the fake everything system, and they still do not get it. When the ship hits the sand, they will not know what hit them or why.

Lies are lies. Period. Facts are facts, whether you choose to believe them or not. Turn on your computer and look at USDEBTCLOCK.org. Figure out how much each taxpayer owes against the national debt. How much do you owe? Spend some time there and look at all the entries. Then decide what our president is doing to make it better and write in and let us all know.