We’ll get to that in a minute… we’re still looking over our shoulders at last year’s performance.

Our Reversion to the Mean (R2tM) portfolio gained 33% last year – not bad for such a simple strategy.

Our R2tM strategy is so basic anyone could do it.

You look for the worst-performing stock markets in the world and buy them. Then you count on the fact that what goes down is likely to go back up.

At the start of last year, for instance, Russia, Poland, and Italy were among the cheapest major stock markets in the world.

The Russian market was up just 2%. But heck, two out of three ain’t bad.

Isn’t that the way it’s supposed to work? Buy low, sell high; not the other way around.

Which is a way of backing into the third of our three most remarkable surprises of 2017 – the dizzying rise of bitcoin and other cryptos.

If any “asset class” has a claim to being top dog for the year, it is cryptos.

But in the racy crypto field, bitcoin ran as though it had a broken leg. The third most valuable crypto by market value, Ethereum, was up 8,900%.

And when we picked up the newspaper on Tuesday, we discovered that Ripple had gone up 50% in a single day!

What, you didn’t invest in Ripple?

Did we forget to recommend it? Must have slipped our mind…

We seem to have forgotten to buy Ripple ourselves. But one of our sons – who has taken a keen interest in cryptos and invested some of the family money in them – didn’t.

“I’m way up. I got back my initial investment almost immediately. Now, I’m thinking about taking a trip around the world.”

“I’d do it sooner rather than later,” we advised. “Cash out and buy your tickets while you still can.”

Last month, shares in LongFin Corp. went crazy after the small financial technology company announced it had hitched itself to the blockchain – the decentralized ledger technology that underpins cryptos – by buying a company called Ziddu.com.

LongFin jumped 1,000% immediately before settling down with a 400% gain.

Then there were some even stranger cases. A beverage company somehow got into the blockchain business. So did a bra maker.

And there was the maker of a urinary control patch called “UrinStopper” whose owners practically wet themselves when they added the word “blockchain” to their business model.

“You get what you pay for,” said economist Milton Friedman. Investors want cryptos… and they’re willing to pay for them.

Young hustlers are filling the need. And then some.

Gone With the Wind

The original premise of bitcoin was that the quantity of the new currency was limited by the unbreakable bonds of its governing algorithm.

And the promise that the transaction costs for cryptos would be so much lower than in the fiat money world has also been undermined by sudden success.

The transaction fee for buying a bottle of beer with bitcoin was recently more than the cost of the beer itself. And investors report delays and snafus in trying to exchange their cryptos for fiat dollars on the big online exchanges such as Coinbase. (Wait ‘til they crash!)

Gone with the wind, too, is the claim that owning bitcoin is inherently safer or easier than owning gold. Investors are losing their “private keys” – the secret number that serves as proof of ownership – and their bitcoins…

Your editor reports that he, too, misplaced a physical bitcoin (which can be spent like the virtual variety). At the time it was given to him, he had no idea that it might someday be valuable…

But getting back to Ripple; what is it?

It is a “centralized, real time, gross settlement system.”

Okay… we don’t have any idea what this is about, either. But as of this morning, it’s cofounder, Chris Larsen, is now the 15th richest person in America.

What can we learn from this remarkable story?

First, there is a plausible argument that the financial (money) system is ready to be disrupted by an innovation such as bitcoin.

In a fake-money world, people pine for the real thing. And when the dust finally settles, a few of these new cryptos will probably still be in business.

Second, never underestimate the power of animal spirits in the investment world. When people think they can get rich without hard work or long hours of study, there will be a rush to get in.

Third, we called bitcoin an entertainment class, not an asset class. Watch out. It could quickly turn from an amusing comedy into a scary thriller… or a tragedy.

But here, we will venture a recommendation (and remind readers that it is worth at least every penny they pay for their Diary subscription): Buy low. Sell high.

Editor’s Note: As Bill showed, the cryptocurrency market is still skyrocketing. But cryptos could be poised for a dangerous correction. Recently, Bill’s top technology expert, Jeff Brown, revealed what could cause this crypto crash, and shows how you can profit safely while other investors lose their shirts. Details here.

One of the features of the Fin de Bubble Epoch is record investor complacency.

Today, we return to a favorite chart here at the Diary, the CBOE S&P 500 Volatility Index, or VIX.

Known as Wall Street’s “fear gauge,” the VIX tracks investors’ expectations for dramatic price swings on the S&P 500 over the next 30 days. 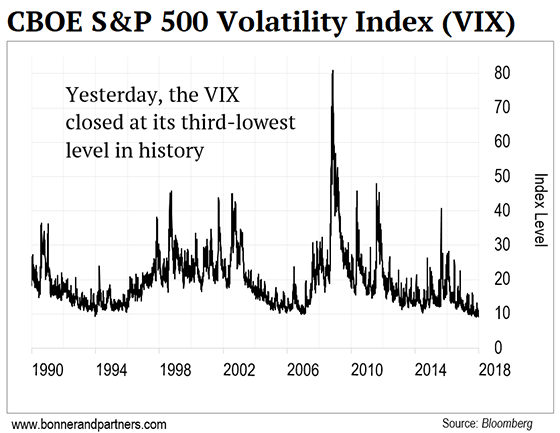 As you can see, yesterday, the VIX closed below 9.2.

It’s less than half its long-term average (going back to 1990 when the VIX launched) of 20.

A New Debt Record
It’s official. Global debt hit a new record of $233 trillion in 2017. That’s more than $16 trillion higher than the previous year. Here’s what it means…

The Facebook Coin
Cryptocurrencies and blockchain technology have exploded onto the scene. Companies are trying to decide how, or if, to implement this new tech within their business. Now, a new industry is looking at cryptos: social media.

Yesterday’s Diary, “Thank You, Mr. President” has gotten readers’ attention, but not everybody’s a fan…

You have tried again and again to put Donald Trump down, and you have lost all the time. Maybe he is not an intellectual like you, but he is doing what he can with morons like you and others (Dems, media, GOP insiders, etc.), and still, he is getting better results than your pal Barack.

You are a nobody that believes that you are successful and forgets that success is not to have money, but to have real friends, a good family, and also decency and honesty, not abuse the system. It is easy to throw rocks at everybody and believe that you are over and above everybody.

You are quite smug, and disrespectful to our president. Maybe you’re just so jealous of his success – in spite of his detractors like you, pretending to be hidden away in some remote area – that you, too, are part of the misinformation media trying to extract money from the ignorant.

Lowest approval rating ever. He has 25 White House positions he can’t fill. He had to hire his family to take some of the positions. He’s a child!

His nuclear button is bigger than North Korea’s. Is this “My dad can beat your dad?” How childish. His father-in-law is a communist. His tax cut is a middle-class joke. The people who need it the least got a huge cut. We (taxpayers) are paying one million dollars a day for his security. One-third of his days are spent away from the job. Go to Atlantic City and see what he did there. Take another sip of the Kool-Aid.

You ALMOST show that you understand that ALL governments are basically a game run by crooks for the benefit of crooks and their supporters.

Mr. Trump, apparently, wasn’t getting enough benefit as things were, so he decided to take charge himself. We are starting to see the result. More wealth for billionaires (like Trump), and less for most of the population. Oh, there will be things like the tax cuts which will appear, on the surface, to help the commoner. But look at who actually makes out best.

Yes, we do need some mechanism to provide or allow services which benefit all of us. But is crooked government the best way to go? Can’t we figure some mechanism of cooperative anarchy which would do the same job, but better for all?

Trump was amusing for a while, but now the consequences of his actions are too serious to be funny.

As you admit, you will save a few bucks on your taxes. But the price paid by your children and their kids is going up. The price paid by people who cannot move to France, for example, is going up. Trump is rapidly undoing all that rational and responsible people tried to create, thanks to the ignorance of his base and the greed of his friends. You, of all people, know what is happening and how history treats those who ignore what can only be described as evil.

Your self-interest no longer only involves business and making money. The economic disaster you describe in your books is now being created, yet you find the process funny. Most other people see the future being created by Trump and friends as horrifying. Sarcasm or attempts to keep above the fray are no longer working. Blaming the swamp while ignoring what is really happening is getting tiresome.

Aren’t you a bit blinded by envy, perhaps? After all, anybody could become president, right? And you and Donald have lots in common, except he has a much bigger bank account. Some kind of incompetent oaf he must be.

I have enjoyed your articles for some time now and will continue to do so. However, you have said several disparaging things about President Trump with which I must take exception.

I am not a “Trump lover forever” type, but I do believe he should be treated fairly. I was not an Obama supporter, but I tried to treat him fairly, as hard as it was. Trump may be bombastic, opinionated, non-presidential at times, and a street fighter. However, one thing he is not is incompetent. The man has built a business empire, been a television personality, and helped thousands of people. He is a businessman and not a politician. He was considered a titan of business and welcomed every place he went before he decided to run for president.

Then all of a sudden, he is considered all you paint him to be? This does not make sense. You may dislike the man, but he is no fool.

One of my favorite quotes is Frank Zappa saying that politics is the entertainment division of the industrial-military complex. Great article.

That’s the message from our colleagues over at Casey Research. Legal marijuana is sweeping the country. And investors have a narrow window to potentially make a fortune. Doug Casey is hosting a free online investing summit next week to show how you can stake a claim. Reserve your spot here.