BALTIMORE – What is it about Davos?

…and turn into knuckleheads.

We would be there, too. But yet again, the invitation committee seems to have lost our address.

Instead, Donald J. Trump will have to represent us. Maybe he’ll break the evil spell.

In the Financial Times is a photo of a smiling Christine Lagarde.

The former French finance minister… former partner at multinational law firm Baker McKenzie… former student at the Holton-Arms School for girls in Bethesda, Maryland… and permanent member of the international Deep State Establishment… is now head of the IMF.

Writing in the newspaper, preparatory to her visit to the Swiss citadel of globalism, elitism, and good-intentions-gone-bad, Ms. Lagarde seemed to be picking up on our theme from yesterday’s Diary:

Despite the improved economic outlook, there are still far too many people left out. There is still too much inequality and still a great deal of uncertainty about the future.

How she knows what is “too much” or “too many” was not disclosed. But in the public space, there’s no check on BS.

In private life, “too much” means something… and you pay for it. When you mouth off “too much” to some big guy in a low-bred bar, for example, he will sock you in the jaw.

BS checked. “Too much” clarified. End of story.

But Ms. Lagarde faces no such reality check. “Too much” can be whatever she wants it to be. The BS continues forever.

“In Japan, for example, estimates show that if women participated in the workforce at a similar rate as men, GDP would rise 9%,” Ms. Lagarde goes on.

Would that be a good thing?

We don’t know… and neither does she. People make decisions on what to do with their lives based on private information and personal aspirations, not public GDP BS.

From there, it is all downhill for Ms. Lagarde – from one blah-blah to another… one BS misapprehension to another BS delusion.

“Too many of the world’s young people are struggling,” she says, again with no clarification on what exactly “too many” means.

Nor is it clear why young people shouldn’t struggle.

Young people have always struggled. That’s what they’re supposed to do.

But Ms. Lagarde has a solution for the struggle: “We can change that in 2018 by creating more opportunity.”

What? How do the bunch of hacks, politicos, cronies, and jackass rich guys gathered in Davos create more opportunity?

Opportunities are not created. They’re discovered. By little guys. Outsiders who figure out how to compete with the big guys – entrepreneurs… wildcatters… freebooters… mavericks… and misfits.

You know… the guys who weren’t on the Davos list.

With more energy than education… more gumption than experience… more hustle than capital – they develop new products and services. As long as the feds don’t get in their way, they hire people. They expand.

Large and In Charge

Everyone at Davos is a big guy. Big in government. Big in business.

They’re the “large and in charge” people who dominate the public space.

And all have the same interest – preventing the little guys from disrupting their sweet deals.

Which brings us to George Soros. The great investor proposes to regulate the internet more heavily. No kidding. Google and Facebook should be regulated like “public utilities,” he urged.

The poor man must have left his copy of Adam Smith’s The Wealth of Nations behind when he boarded the plane.

“Mnuchin extols America First agenda,” is the headline in the Financial Times.

Yes, Mr. Mnuchin has gone to Davos to join Trump, Lagarde, and Soros… all soliciting more power and money for the elite.

Rather than let buyers and sellers work out their own win-win deals, he’s pushing for more government interference, including win-lose tariffs on washing machines and solar panels… and soon, steel and aluminum, too.

Ms. Lagarde will spend her whole career in the BS world of “public service” and sinecures. But Mr. Mnuchin and Mr. Soros come from the world of markets (albeit distorted by a fake-money system).

They should know better.

Socked in the Jaw

Markets react to public BS and to public policies, just like the press and the public itself. As super investor Warren Buffett puts it, markets are a “voting machine” in the short term.

But in the long term, they get socked in the jaw, too.

All over the world, central banks are raising interest rates.

At the same time, Mr. Mnuchin and his president are spending more money – first on the military… to be followed with a $1.8 trillion infrastructure proposal.

This will push up the deficit… and further raise interest rates.

Let’s see… How does that work again? The world has $230 trillion of debt. It can only stay on its feet so long as interest rates remain low.

Ultimately, markets will throw a punch. Stocks and bonds will drop. Trillions of dollars of paper wealth will fall flat.

Keep an eye on U.S. stocks that make most of their revenues overseas…

Today’s chart looks at the Russell 1000 Index, which tracks the 978 largest stocks in the U.S. by market value. 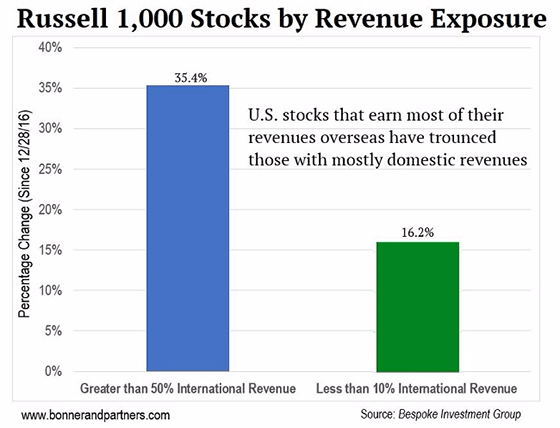 Thanks in large part to a declining dollar, U.S. stocks that earn more than half of their revenues overseas are up 35% since the end of 2016.

That compares with a 16% gain for the U.S. stocks that earn less than 10% of their revenues overseas.

Ditching the 401(k)
Most Americans depend on their 401(k) to help them prepare for retirement. But now, some say the 401(k) system is broken. Here’s the case for ditching it…

The End of Facebook?
Facebook is one of the largest companies in the world by market capitalization. And until recently, it’s enjoyed a sterling reputation. But that could be changing… Could this be the end of Facebook?

What 99% of Investors Don’t Understand About Cryptocurrencies
The investing world is obsessed with bitcoin. But Jeff Brown, Bill’s top technology expert, says 99% of investors are missing the bigger picture. Here’s what they don’t understand.

In the mailbag, Bill’s “Antidote to Optimism” sparks conversation:

These certainly are strange days we are in, when brokers let you know how well they’ve done for you when it was really all about what the market did. Following the Great Recession, it was a hat-in-hand, “this too shall pass” experience. All of which serves to remind us of the truism that life itself is not fair. It’s just a matter of which end of unfair you end up on.

The U.S.A. is in a world of hurt with the Maniac in the White House. Obama is good and Trump is like most white men who are large and in charge.

“Above-board tax revenues and surreptitious debt” gave me a chuckle. Of course, taxes are far from above-board, as is how they are spent or wasted. Some are more surreptitious, like the corporate tax that, purportedly, hits rich corporate folks when, in reality, it is consumers who end up paying it.

The debt, on the other hand, is there to see for anyone who cares to look. That is not to say that all debt is good, but the “switch” has been going on for a loooong time. The debt ceiling debate is hilarious theater as long as Congress keeps appropriating deficit spending. A joke!

By the way, I think it’s wrong to blame Obama or Trump when POTUS can only spend what Congress approves.

The most interesting thing about that map is the region of the Eastern Rockies and the Midwest west of the Mississippi. For some reason, North and South Dakota, eastern Montana, Wyoming, Colorado, and large swathes of Texas have actually seen fortunes improve. Compare that to a line from Mississippi to the south side of Lake Ontario, and you have the real area of great depression. I know nothing about why that would be, but it would be my starting point for trying to see if any dots connect.

Have you heard of Bill’s “Trade of the Century?”

If not, then consider signing up for this free event. Bill will give you all the details, and has even teamed up with Chris Mayer, one of his top analysts, to reveal how to profit. Details here. 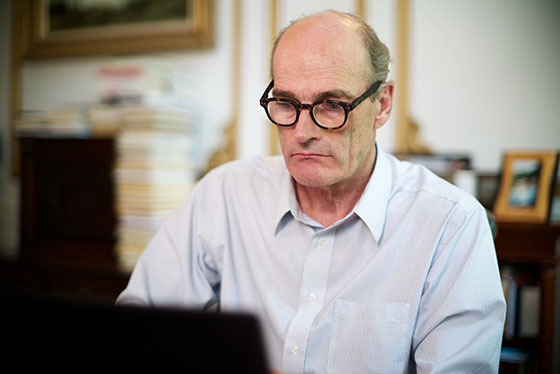