YOUGHAL, IRELAND – We left off yesterday with a provocative question: Has Trump really gone to war with the Deep State?

Or was he just mouthing off in Helsinki… off message… and out of control?

There are a couple more hypotheses, too… but we’ll get to them in a moment.

Even some of Mr. Trump’s dearest supporters seemed to think Mr. Trump he has gone too far off the reservation. Newt Gingrich, for example, seemed to suggest that the president needed to edit his transcript:

“It is the most serious mistake of his presidency and must be corrected – immediately,” he tweeted.

And here is Dan Coats, the president’s own Director of National Intelligence, sticking to the Russians-are-bad-guys trope and referring to allegations of election interference:

These actions are persistent, they are pervasive, and they are meant to undermine America’s democracy.

He and Putin seemed to be reading from the same script …

I want President Trump’s diplomatic efforts to be successful, but I’ll take the word of a Hoosier over Vladimir Putin any day.

The word he was taking was what U.S. intelligence agencies were putting out – that is to say, the word of Deep State operatives. Their claim was that Russia hacked into U.S. computers, specifically the systems of the Democratic National Committee, to try to influence the presidential election of 2016.

We bring the Deep State into the conversation because it may turn out to be the “who” in this “who-dunnit.”

Regular readers will remember that the Deep State is the loose collection of special interests… government insiders… and financial elites that control the country.

Remember, too, that Italian economist Vilfredo Pareto described how all governments are taken over by the “foxes” – aka the Deep State – smart, elite insiders who use the power of the state for their own purposes.

The Deep State is the major beneficiary of the Warfare State, the Welfare State, and the Police State. And if Donald J. Trump really was a threat to any of them, the insiders had a better motive than the Russians for wanting to slow him down.

Besides, U.S. intelligence agencies had much more money to work with… much more talent to draw on… and many more opportunities to get up to mischief.

That’s why some analysts believe that the mischief at the heart of the Russiagate story was more likely gotten up to by U.S. spooks rather than foreign ones.

Two retired NSA and CIA analysts, William Binney and Ray McGovern, with a combined 63 years of experience, came forward over the weekend and made an astounding charge.

They said the hack – made by a program called “Guccifer” – was almost certainly an inside job, carried out by America’s own intelligence professionals and made to look like a Russian job.

Want to know where Guccifer came from? “Ask the FBI,” proposed the two intelligence experts.

In the last half-century – since Eisenhower spoke out and JFK was assassinated – no president has ever seriously challenged the Deep State.

There was one brief moment, early in the Reagan administration, when it looked as though the feds’ wings might be trimmed.

Our colleague, David Stockman – who, as President Reagan’s budget advisor, had the clippers in his hands – tells the tale in his marvelous memoir, The Triumph of Politics: Why the Reagan Revolution Failed.

Writing on the inner workings of The Swamp, David recalls:

More than anything else, I was struck by the dramatic contrast between how hard and with what care, pride, and discipline the nation’s citizens worked to earn our national income and wealth on the one hand, and the feckless, inconsistent, and muddled manner in which it was shunted around the halls of Washington on the other.

But there was never any effort to restrain the deepest elements of the Deep State – the military and the spooks.

And despite initial successes – budget and tax cuts – the insiders were soon back in control, and Stockman left Washington.

Here at the Diary, we don’t trust Hoosiers or Putin. After all, Mike Pence is from Indiana.

And when Donald Trump says, “I’d rather take a political risk in search of peace than risk peace in the name of politics,” it makes sense to us.

But Deep State warmongers can’t stand peace; it endangers their supply lines. In the absence of a real enemy, huge wealth transfers to the Warfare and Police States make no sense.

Reagan got bamboozled into big “defense” increases because he feared communism.

The Warfare State hawks and intelligence insiders lit up his imagination with images of Soviet hordes streaming across Europe… infesting Latin America… and rolling tanks towards Singapore.

We found out a few years later that it was all nonsense. The Soviet Union could not even hold itself together, let alone attack the world’s number one military power. Besides, communism is a self-correcting malady.

(In the late 1980s, another of our colleagues, who had been working with former CIA director William Colby, predicted that the Soviet Union would soon go out of business. He was dismissed and laughed at, not only by the mainstream media, but by Washington’s security professionals. The Soviet state collapsed a few years later.)

So what is going on? We don’t know, of course. But we’ll take some guesses.

Senator Chuck Schumer and The Washington Post wonder whether Putin has something on the U.S. president – a kompromat.

Did he do something naughty with hookers? Does he owe the Russians a lot of money?

Anything is possible… but it is even more likely that the Deep State has something on Mr. Trump, as it might have on almost everyone. So the “hidden-motive hypothesis” could go either way.

And Mr. Trump is no fool. He’s not really going to enter a serious, protracted war with the Deep State.

If he did, he would soon be isolated… marginalized… driven out of town… or worse.

He has already made peace with the Warfare, Welfare, and Police States. What would he gain from stirring up trouble now?

The best hypothesis is probably the most obvious one: The Helsinki meeting was just another episode in Mr. Trump’s reality TV show.

The ratings were great. Nothing else matters much.

Business as usual. Bankruptcy and depression still lie ahead.

Simply put, a higher reading on this chart means that the difference between the two yields, or the “spread,” is increasing.

A lower reading means that the yields on the 10-year and the 2-year bonds are starting to converge. 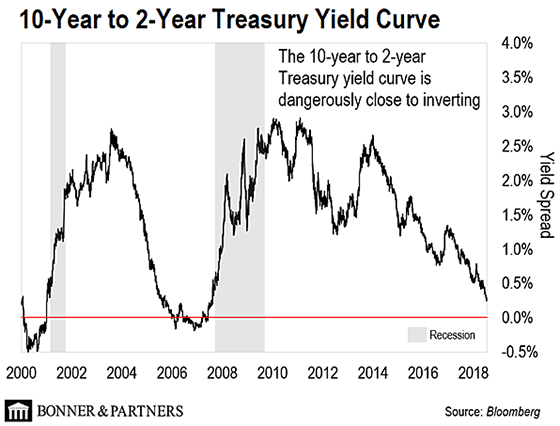 In a healthy economy, yields on longer-term bonds should be higher. This compensates investors for the risk they take when lending money out over a longer period.

But an inverted yield curve signals that short-term risks are higher than long-term risks… which is not sustainable.

And when the yield curve inverts, a recession is likely to follow – which was the case the last two times this happened in 2000 and 2008.

Where’s the Volatility?
After a shaky start to the year, investors see calmer seas ahead. That’s what the CBOE Volatility Index (VIX) is showing, closing at its lowest level since February. Is it smooth sailing ahead, or is this the calm before the storm?

The Bitcoin Short Squeeze
Bitcoin, the world’s first cryptocurrency, spiked 10% in 20 minutes on Tuesday. There was no obvious catalyst… And that has some analysts wondering about a bitcoin short squeeze…

How America Can Stop Chinese Snooping
Earlier this year, it was revealed that Chinese telecom company Huawei was monitoring internet traffic over its networks. This led to Huawei products being banned for government officials. Now, the U.S. has a plan to stop any future spying…

In the mailbag, more Trump…

I guess you are not into details. When the Queen and President Trump went for the review, watch the Queen’s hands. She subtly pointed him to go, where and when. She is too classy to flag her arms and hands about, and the president is more observant than you and the press. Talk about missing it, Bill. But you and many others did. I am glad I had my cataracts removed – I can see better at 75 than you kids!

I don’t quite understand how you defended Trump. The man is a cowardly, ill-tempered, lying jerk.

I love your spirited defense of el presidente while in London. I’m sure it was calculated to rouse the rabble amongst your readership, and amuse your Brit acquaintances as well. It is like saying that one has the right to continue to make a jackass out of himself just because he is so good at it. Hear, hear. I guess the fun continues right up until the party’s over. Keep up the clear observations

Trump is more “on the ball” than the entire United Kingdom. The country’s a mess. William and Charles need to know that’s why we left England in the first place. They’re stupid.

I thought Trump was a total disgrace – rude, ignorant about the facts, and insulting to both England and America. (I don’t know which was worse.) But today in Russia, it was even worse.

We are doomed if people don’t wake up and stand up to him. Is America asleep at the wheel? Who would allow him two hours alone with the Russian president? I can only imagine the deal he made for himself. Sorry, but I am one of your readers of the Diary, and finally, I’ve read a write-up that makes sense and tells the truth! Thank you.

I can’t believe how some of your readers can’t connect the dots. Trump constantly calls people names like “Little Rubio” and “Crooked Hillary,” and expects them to cower instead of push back. He is just a bully, and he acts like one.

Since he is under the control of Putin, he, of course, accuses Germany of being under the control of Russia. This is a typical bully tactic. Putin has an estimated wealth of $200 billion, and Trump probably owes him at least $1 billion or more. Trump won’t release any financial information because it would show he is broke and in debt.

Now, he uses the U.S. government to help bail out his losing golf clubs around the world by visiting them often with a large group of government security employees. How crooked can he be by ripping off the U.S. taxpayers, especially since he probably doesn’t pay any taxes because of his losses? What a low-class and poor excuse of a man and a president!

I read the comments from your readers today, and of the four I read, all seemed to be pro-Trump. It is beyond my comprehension that reasonably intelligent people cannot see when the president of our country is a narcissist (that means he cares nothing about you; he cares only about himself) and a racist (that was very evident during the election process; think four-star Muslim family, caged children, and the list goes on).

And his comments lead one to believe that he is a fascist (i.e., Melania’s jacket – learn the meaning of the words and who made it). He seems to be a traitor to our very country, praising our foes (Russia and North Korea), and acting like a jerk to our allies.

Why is Wall Street now investing billions of dollars in cryptocurrencies?

Click here to register for this event for free… (And as a bonus, learn how to get your share of the $2 million bitcoin giveaway.) 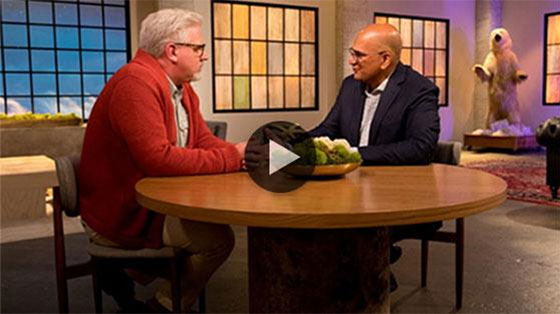