BALTIMORE – The titans of one era become the schmucks of the next.

Marshal Michel Ney, one of France’s greatest soldiers, was executed by his own people… who later put up a statue of him in Paris.

General Robert E. Lee was revered by both sides in the War Between the States; statues were later erected on both banks, north and south, of the Potomac. Now they are coming down (often in the middle of the night to avoid a confrontation).

And here now, among the mighty fallen, is General Electric and its celebrity ex-CEO, Jack Welch… Mr. “Winning” himself.

GE is crumbling. And so is Mr. Welch’s reputation. He made GE what it is today… and was named in 2000 as Fortune magazine’s “Manager of the Century.”

In summary of the next 500 or so words, Welch did to GE what Greenspan, Bernanke, and Yellen did to the U.S. economy: he financialized it.

Instead of offering goods and services in honest, win-win trades, Welch borrowed fake money and built an empire. Now that empire is falling apart.

But first, we go back to the glory days…

In the 1990s, GE Capital, the financial services unit of GE, was buying businesses all over America.

“What happened when the suits took over?” we asked an old friend, circa 1995.

He had sold his business to GE. We had heard that things weren’t going well.

“Are you going to help them?”

“No… They don’t want my help. They’ve got MBAs. I’m just going to wait until they give up and buy it back.”

Our friend must have anticipated GE’s reputation for “buying high and selling low.”

Which is exactly what happened: Our friend got his business back and soon made a success of it again. GE lost about $20 million on the go-round.

The House That Jack Built

The chief of GE at the time was “Neutron Jack” Welch.

He was a tough-minded, self-promoting executive who took the company on a borrowing-and-buying spree.

So lusty were his appetites that the old industrial powerhouse was soon in entertainment, healthcare, insurance, software… and, especially, finance.

Sales soared. The stock price rose. And Neutron Jack was named “Manager of the Century.”

The stock has lost three-quarters of its value – in the middle of the greatest bull market ever.

Shareholders have suffered about $400 billion in losses. As for Mr. Welch, the press reports that he is “apoplectic”… and “melting down” with anger.

GE is failing. Its member parts are being broken apart and sold off. Jack’s legacy is in shambles.

…hardly anyone considers Mr. Welch, now 81, a management role model anymore, and the conglomerate model he championed at GE – that with strict discipline, you could successfully manage any business as long as your market share was first or second – has been thoroughly discredited, at least in the United States.

And now we see, too, why he deserved the “Manager of the Century” epithet.

As the economy went in the last half of the 20th century, so went GE.

The Fed dangled cheap credit in front of ambitious businessmen. Like many others, Mr. Welch took the bait.

Now, GE is on the hook for some $600 billion of debt. With $100 billion in revenue, this puts it in almost exactly the same situation as the U.S. government.

It, too, has debts equal to about 6 times its revenues. Too bad GE can’t print money.

Straight From the Gut

As GE goes, so goes America.

It was a conceit to think you could manage businesses you didn’t really understand. But it was a conceit widely shared by titans of industry and politics.

Mr. Welch thought it was enough to bring the “straight from the gut” management talk to a business.

And he was right… for a while.

America was being corrupted by fake money, top to bottom; Mr. Welch must have figured (or maybe not figured at all) that he could make a fast buck in finance.

He looked like a visionary when he moved the company into the “closet banking” business.

In its salad days, GE Capital accounted for 60% of GE’s profits. It was making money, not by selling engines and toaster ovens, but by loading up customers with billions in dodgy loans.

Of course, almost any moron can make money by borrowing short and lending long when rates are going down.

But when the credit cycle shifts, it’s best to pass thoughts through your brain as well as your lower intestine.

In 2008, credit suddenly tightened… and GE seized up.

The feds had to bail it out with $139 billion in loan guarantees. Super investor Warren Buffett helped out, too, with a $3 billion injection.

After that, GE could never quite relax. It had too much debt, and no way to master the detailed knowledge needed for the many competitive businesses Welch had blundered into.

And now, in 2018, GE is in full rout mode. Even sales of Welch’s book, Winning, have fallen off as the company tries to unload other businesses, too… even light bulbs.

Overseas stock markets are off to the races in 2018.

And it plots them against the performance of the S&P 500 over the same period. 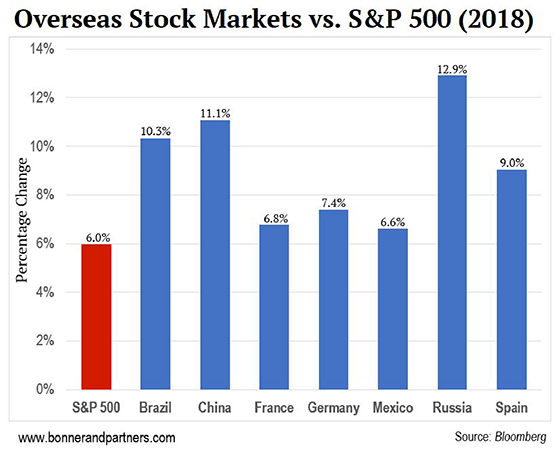 GE Sinks Deeper
As Bill showed, General Electric has fallen from grace. And investors are punishing the stock. GE stock fell to a 6-year low on Friday.

The Market Isn’t Bullish for Everyone
After a record 2017, U.S. stocks continue to march higher. But not everyone is popping the champagne. New data shows that the good times in U.S. equity gains are very one-sided.

The Solution to Banking Fraud
Several years ago, banking giant Wells Fargo began opening millions of “ghost accounts” in order to charge customers for services they never wanted. But Jeff Brown, Bill’s top technology analyst, has uncovered a piece of technology that will make this type of fraud a thing of the past.

Today, the recent government shutdown is on readers’ minds…

It’s contemptible that Congress operates with such impunity. The public doesn’t realize that when the Fed shuts down as a result of legislative and executive incompetence, it costs us taxpayers millions of dollars. In every case I’m aware of – and I was in the federal government and military for 30 years – the government paid furloughed federal workers after returning to work for their time off so that they did not lose a dime. The citizens lost in stopped and delayed services and in the extra costs of restarting those services.

Why? Because no one wants to anger the 1.4 million federal wage earners who definitely vote more regularly than the average citizen. If our legislature and executive branches really wanted to do something significant, they’d furlough U.S. government employees without pay when reaching such impasses. It’s disingenuous to have these shutdowns and hide the real effects from voters.

You have forgotten the government also shut down when Obama was president.

Wondering how it will end? Really? The Beach Boys answered that question in 1964: “And she’ll have fun, fun, fun ‘til her daddy takes the T-Bird away.” Somebody is going to have to take our credit card away. Who is/are that somebody/those somebodies? Well, it’s not “Daddy.” He’s in on it, too.

The majority of voters support DACA, want Medicare and Medicaid to be fully funded, and agree that the poor should be helped and that healthcare is a right; yet, they vote for people who oppose these ideas. Most people believe infidelity and lying to be sins, yet they choose a liar and a philanderer as their leader and as an example of their values to the world.

Why does such a conflict exist between the choice of leaders and the stated self-interests and values of most citizens? How long can a country function when such a conflict exists? According to your very careful analysis, our leaders have created a situation that will lead to the financial destruction of the U.S. Yet these leaders continue to be supported. In view of these clear conflicts between what most people want and what they get, why do we still call the U.S. a democracy?

In the 16th century, Spanish conquistadors established two cities in South America. These two cities were once described as “the richest in gold” in all the Americas.

The cities have been lost for centuries. But now, one man believes he’s uncovered them… It may seem like an adventure story, but read all the details for yourself right here. 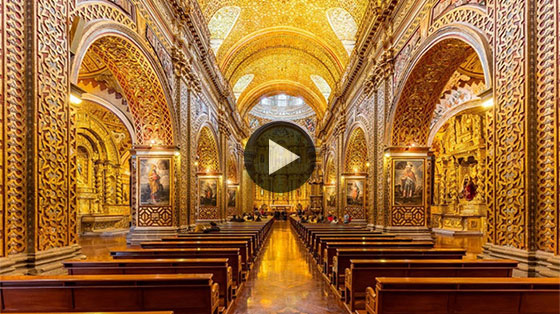