POITOU, FRANCE – For nearly two decades, the world’s central banks have labored hard, sweating to coax more digital money out of a stony and grudging economy.

More than $20 trillion did they bring forth via QE (buying stocks and bonds with newly created cash) – a mighty sum indeed.

What it might wring out of the future is our subject for today.

The coast is clear, we think we wrote yesterday, for a blow-out spree of money printing, borrowing, spending, and debt.

The world’s four major economies are ready for it – with Shinzō Abe re-elected in Japan… Europe still under the spell of Mario “Whatever It Takes” Draghi… Donald J. Trump ready to do the Deep State’s bidding in America… and China with little choice but to pump in more cash and credit, as now the whole economy has come to depend on it.

(We read recently that the Chinese government is attempting to prop up the real estate market by buying nearly one out of every four new apartments.)

When it comes, the fireworks will probably be like what Austrian School economist Ludwig von Mises had in mind when he described a “crack-up boom,” the sort of nervous frenzy you get before you go to pieces completely.

But not so fast. There’s something missing… another sort of delirium that will bring on the final fever.

Stocks have been going up for the last eight years.

From whence cometh so much buying pressure?

Didn’t people already have enough stocks in 2009? Did they yearn for more?

Or did they earn so much more money… did they save so much with rising profits and wages that the real economy produced… that they ended up with trillions of dollars in unhoused money in need of a good home?

Instead, the money came from central banks. European Central Bank (ECB) President Mario Draghi has been pumping $70 billion a month into the world’s capital markets.

Bank of Japan Governor Haruhiko Kuroda has been adding another $30 billion.

And China has added $8 trillion in debt (money from nowhere) over the last two years.

Of course, everyone believes in the Stimulus Theory just as fervently and unquestioningly as they once believed in the Virgin Birth or Prohibition.

And we have no doubt that, when the going gets rough, the authorities will go back to the electronic printing presses… from which they will tease out more cash and credit than the planet has ever seen.

But the going is not rough yet. And the authorities aren’t complete boneheads. They know they have pitched their tents in the monetary equivalent of Bangladesh – with only a few feet between them and sea level.

Apart from Mr. Kuroda in Japan, they are eager to move to higher ground, raising rates so they can lower them, as need be, in the next crisis.

Even Mr. Draghi wants to build a dike. Bloomberg:

Starting in January, the ECB will take a step toward ending one of its more controversial tools by cutting monthly purchases of public and private debt to €30 billion ($35 billion), or half the current pace. The shift in stance comes six years into Draghi’s presidency, a new phase after his unprecedented actions to prevent the breakup of the euro area and stave off deflation.

QE will be extended again if needed, even if only to draw it to a gentle halt, and will take total holdings to at least €2.55 trillion ($2.97 trillion).

In China, the explosion in new credit over the last couple of years has been breathtaking. Total debt – public and private – expanded three times as fast as the economy.

But this expansion may have had a specific and unique cause. Colleague David Stockman (who was President Reagan’s first budget director and who knows a thing or two about government profligacy) suggests that Beijing went wild with credit growth for political reasons.

It wanted to make sure the economy was running hot for the coronation of President Xi Jinping as the “most powerful Chinese ruler since Mao.” David:

Beijing opened up the credit spigots like never before. […]

[But] now that Mr. Xi has been installed as China’s most powerful ruler since Mao, its planners and bureaucracy are already back at the far less congenial underlying task. Namely, to find some way to reel in its runaway credit growth and the resulting bloated, lop-sided, investment-driven economy before it collapses on the head of the Chinese Communist Party. Accordingly, a downturn in China macro-performance is virtually baked into the cake.

In short, what is coming down the pike, therefore, is the great China Debt Retrenchment – a globally-impacting braking motion that will get underway in earnest after the 19th Party Congress. And its potential to drastically weaken the global economy and corporate profits – just as it has lifted these in the recent past – should not be underestimated.

Meanwhile in the U.S., the Fed says it will make hay while the sun shines by reducing its assets (and the world’s monetary footprint).

Slowly at first. But by this time next year, the bonds on the Fed’s balance sheet are supposed to be declining at a $600 billion annual rate.

Mr. Xi is tightening up.

Mr. Draghi is tightening up.

Ms. Yellen is tightening up.

They are reversing the policy that a generation of investors, businesses, and households has taken for granted.

Hmmm… what will that do to the gigantic bubble they have created? We don’t know. But we have a hunch that it will send central bankers scrambling to bring out the biggest punch bowl ever.

Editor’s Note: Yesterday, Bill recounted a colleague’s birthday party aboard a ship traveling up the Rhine. Today, he shares this brief video below from the festivities.

Today’s bull market is one of the longest in history.

But in every market, there are winners and losers.

Today’s chart illustrates that by tracking the total 12-month return for the financial and energy sectors versus the S&P 500. 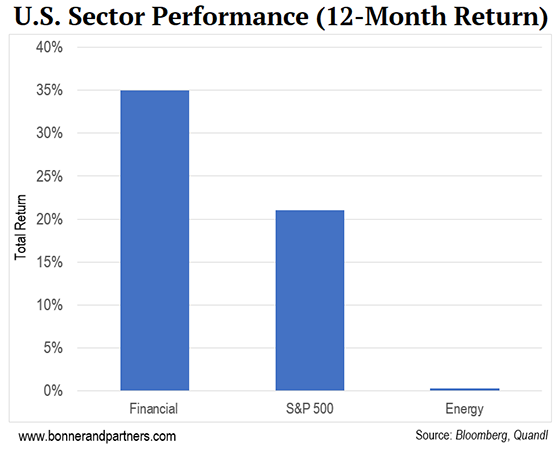 That compares with a 35% return for financial stocks.

And just a 1% return for energy stocks.

What’s Really Driving This Bull Market
We’re currently in one of the longest-running bull markets in history. Stocks continue to climb to new highs as volatility hovers near historic lows. What’s causing this remarkable run? It’s not corporate earnings or economic growth. It’s something else entirely…

Why Most People Lose Money Investing
There are a lot of misconceptions about investing. For instance, most people don’t know that, after accounting for inflation and costs, the majority of investors end up losing money.

How To Avert a Pension Crisis
States like Illinois are in the midst of a pension crisis. In order to avert a financial meltdown, the government may be forced to resort to unconventional methods. Crisis Investing editor Nick Giambruno shows what these desperate measures are and how you can profit.

In the mailbag, one reader has a hypothesis for the origin of the Deep State:

You seem to think that President Trump is becoming a captive of the Deep State. You say that nobody knows how the Deep State came about. The 16th Amendment, the income tax, and the 17th Amendment created it by their effects.

The income tax gave the government power to extort the money which feeds the Deep State. The 17th took away the individual states’ power to appoint and withdraw senators. Thus, they became representatives with six-year terms to follow their own desires to get rich with little or no work, which they do by using the Deep State.

Why don’t you use your brain and power to work on repealing the 17th and enacting the Fair Tax? Why should you? To keep your children, grandchildren, and great-grandchildren from living in a nation even more tyrannical than it is now.

Thank you so much for sharing your world travels with us. Sure, your financial insights are very welcome. But I find I look forward to your philosophy even more. And your helicopter views on human history are more like planetary views. They leave me reassured that whatever is happening in the world right now is just one more paragraph in history books, and I can simply watch it play out with a sense of curiosity and wonder at human nature.

Probing questions are much weightier than mere opinions of hypothetical solutions. And you frame these questions brilliantly in your Diary.

Do you have a few hundred dollars? If so, you have all the capital you need to potentially become a cryptocurrency millionaire.

That’s the message from cryptocurrency investing expert Teeka Tiwari. Teeka is the analyst who found cryptocurrency gains as high as 22,000% for his readers. And he believes 2018 will be an even bigger year for the crypto market.

Get the full story by signing up for Teeka’s free training webinar. It’s tomorrow night at 8 p.m. EST (rebroadcast at 8 p.m. PST). So reserve your spot now, right here. 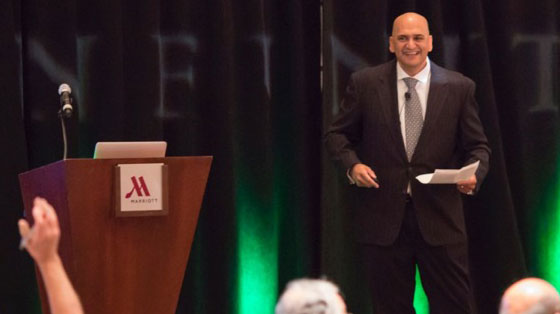