YOUGHAL, IRELAND – As a republic matures, it slides down-market…

The rails are silently greased by the cronies and grifters who control policy measures for their own benefit… while the rabble rallies to campaign slogans and admires TV idols.

The media – dependent on the mass of consumers for ad sales – sinks, too… stooping as low as possible to scoop up as many eyeballs, clicks, and cat videos as it can.

This drags down public discussion to a level scarcely better than the simian hoots and howls of wraslin’ fans.

There is no time or place for real thinking. There is no market for careful, nuanced reflection.

Nobody has the time, training, or information for serious study; and who would care anyway?

Here at the Diary, we make a feeble attempt at serious thinking from time to time.

Sometimes right, sometimes wrong, and always in doubt… we are suspicious of all facts and ideas – even the ones we make up ourselves.

As for those other jackasses, we presume – a priori – that they are idiotic.

Thus did the news of an economic “breakout” reach us on Friday… more like a jingo than a fact. Second-quarter GDP growth printed at more than 4%.

The news was greeted with great jubilation, at least in the White House. It was a “mission accomplished” moment for President Trump, who may actually believe his policies are paying off.

We will mention, in passing, deregulation, too.

But deregulating a late-stage, degenerate empire is almost impossible. It is simply too infested with powerful insiders, who get their jobs, incomes, awards, and status from the feds’ diddles.

Also, other big Trump initiatives – the trade war and a fatter Pentagon budget – will add more opportunities for these win-lose bossypants.

Already, there is a long line of U.S. lobbyists beseeching the White House to spare their industries, to make exceptions for their clients… or to stick it to their competitors, at home or abroad.

On balance, Team Trump is probably adding more to the swamp than it is eliminating.

As for the substance of the trade war, there is none. It is a phony war against a phony enemy.

The trade-weighted average tariff between the world’s three biggest economies – Europe, the U.S., and China – is less than 2%.

Completely eliminating tariffs wouldn’t amount to a hill of beans. Besides, so far, the Trump administration has added to tariffs, not reduced them.

The tax cut, too, cuts both ways. Had the feds cut spending rather than taxes, this would have left the private sector with more resources to work with (notably, credit).

But cutting taxes without cutting spending leaves the feds still taking the same swill from the trough while returning more to the taxpayers. How do they do that?

U.S. federal debt increased by more than $1 trillion over the last 12 months. And it’s set to increase by a lot more.

If you’re going to borrow, you need someone with money to lend. And where does the money come from? It is either real savings… or it is made-up, ersatz, phony-baloney savings invented by the central bank.

Real savings are limited and few (savings rates are near record lows). And the Fed says it is no longer providing fake savings; not only that, it is raising… ever so delicately… interest rates.

Whatever short-term lift you could get from cutting taxes, in other words, will come at a heavy, long-term price.

The feds will be forced to borrow more and more money at higher and higher rates. Most likely, this will drive rates up further… and knock down both the economy and asset prices.

Martin Feldstein, writing in The Wall Street Journal, describes what will happen next:

It’s too late to avoid an asset bubble: Equity prices already have risen far above the historical trend. The price/earnings ratio of the S&P 500 is now more than 50% higher than the all-time average, sitting at a level reached only three times in the past century. Commercial real estate prices also are extremely high by historical standards.

The inevitable return of these asset prices to their historical norms is likely to cause a sharp decline in household wealth and in the rate of investment in commercial real estate. If the P/E ratio returns to its historical average, the fall in share prices will amount to a $9 trillion loss across all U.S. households.

Then, of course, having caused a calamity, the feds will get to work anew – making it worse.

That’s the story today as we chart the S&P 500’s annualized dividend yield by decade. This measures the average return from dividends of all the stocks in the S&P 500. 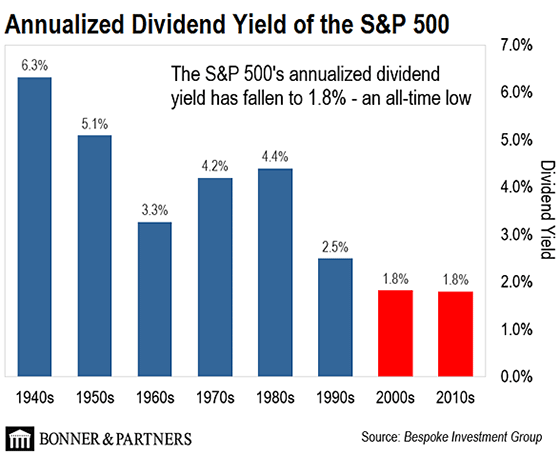 The S&P’s dividend yield jumped to more than 4% over the next two decades, thanks largely to interest rates spiking in the late ’70s and early ’80s… But it has been downhill ever since.

Falling interest rates are likely one reason why dividend yields plummeted in the 1990s and 2000s.

Dividends are not directly tied to interest rates, but dividend-paying stocks must compete for capital with fixed-income investments like U.S. Treasury bonds. And lower interest rates reduce the yield on U.S. Treasuries, allowing dividends to fall as well.

Today, with historically low dividend yields… as well as historically low interest rates… income-seeking investors are in a tough spot. They are forced to either accept low rates of return… or seek out riskier investments like junk bonds to reach for yield.

Can Apple Save the Bull?
In the wake of “nightmare guidance” from Facebook, the company’s share price and the broader market fell. Then Twitter shed 1/5th of its value in a matter of hours. With so much bleeding from Big Tech, many analysts are counting on Apple’s earnings to save the bull market.

The Amazon of Homebuilding
Scale or die. That’s the mantra of today’s business world. Tech giants like Amazon and Google have perfected this by expanding rapidly while maintaining productivity and efficiency. Now, a new startup is taking that philosophy to a new industry: homebuilding.

How Inflation Destroys a Society
It’s an unseen threat. Inflation of the U.S. dollar has marched higher for decades. Meanwhile, wage growth has consistently failed to keep pace. The problem is coming to a head… and could lead to disastrous consequences.

In the mailbag, the increasingly cozy relationship between Big Data and America’s spy agencies has readers on edge…

I, too, fear this: “Using data and algorithms, in collusion with Facebook, Google, and Amazon, the feds may now be on the cusp of a totalitarian’s dream, where they are able to manipulate and control the masses on a scale never before imagined.”

However, I am also very aware that the geeks who run this network speak in principles and rules that are absolute; computers don’t deal well with typos, and math is not fuzzy. Computers are simple-minded and demand clarity and consistency in the orders we give them. It takes smart, rational people to make the machines work.

Politicians have people smarts, perhaps, and many are generally smart. But if they’ve gone into politics, they probably don’t understand computers. And many are somewhat irrational. The freedom-seekers, innovators, and others in the infotech arena have a big head start.

The government employs geeks-for-hire, but many of them are fully capable of being whistleblowers like Snowden, since principles matter to them. The only control the government has on the internet is through threats to domestic service providers such as cable companies and software campuses.

Once the hardware becomes internationalized (satellites) and further decentralized, they’ll lose their grip again. They can’t move fast enough. Having a decentralized, unstoppable design is central to the reason the internet was created in the first place.

I love that you haven’t let the small setback in barn reconstruction be wasted. Thus, your keen observation that the many diverse special interests “run their roots deeply into the government edifice,” and “each claim may be absurd on its own merits, but once the roots are entwined with the stone, they can’t be pulled out without bringing down the whole wall.”

That old, long-abandoned barn stood there all that time, stoically suffering the insult of a tree’s roots into its stone wall, so that you could one day have just the right metaphor. Brilliant.

Now, Bill! “Elizabeth operated the handsaw admirably as a grandchild held down the two-by-fours.” In the picture, it looks like you have two-by-sixes and one-by-fours, but not any two-by-fours.

If Elizabeth did the handsawing, she did most of the work! Nailing up roof joists is not that big a deal once the wood is cut. You also need to drill the cross two-by-sixes, and install a 3/8 inch by 3 1/2 inch bolt in each end. You just told the world you aren’t a carpenter!

Is this Trump’s promised infrastructure plan?

In January, the president made a very unusual move… 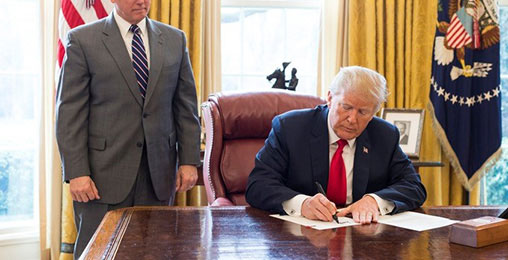