POITOU, FRANCE – Yesterday, we guessed that The Donald would back down on his threat to impose a 25% tariff on Chinese goods coming into the U.S.

Not because it would be a $50 billion tax on his own base – consumers who are already living close to the edge. The president’s fans are solid. They will not desert him, even as he stabs them in the back and walks over their bodies.

There is some $115 trillion in excess debt in the world – that is, debt above and beyond what can be comfortably supported by the real economy.

That debt is a liability to Main Street and the public. But it is an asset to the rich. As we have described in these pages before, it’s EZ credit that is the linchpin in today’s fake-money system.

The Deep State’s stocks, bonds, and real estate values… not to mention its careers, incomes, and reputations… depend on it.

And it is made possible by the China trade… by Chinese workers who put in long hours in miserable conditions in order to stock the shelves of Walmart with cheap goods… by Chinese manufacturers who undersell their competitors to keep consumer price inflation in the U.S. at low levels… and by Bank of China, which holds some $1.25 trillion worth of U.S. bonds… thus propping up the whole wobbly capital structure.

But let us take a break from the imminent collapse of the world economy and the consequent Great Depression… probably accompanied by catastrophic wars.

Instead, let’s focus on something important: our barn roof in Ireland.

Several dear readers wrote to point out our mistakes. One said the collar ties were too high. Another said they weren’t bolted on properly. Still another said he thought he saw one-by-fours rather than the two-by-fours we claimed.

More than one suggested that we were not a very good carpenter.

And here, we protest! Now, you’re going too far, dear readers… Our pride engaged, we respond in dudgeon.

Okay, we are often wrong about politics and economics… But who isn’t? It’s all guesswork.

But we’re not wrong about how to frame up a barn roof.

They were two-by-fours, not one-by-fours… We did bolt the collar ties to the rafters… and the collar ties were in the right place (there is no snow load in Ireland to worry about).

Our only regret was that we had wanted to attach the rafters to the sill plate with “hurricane ties” – galvanized metal brackets. But none could be found.

Another feature of this Irish barn is that the gable ends – not shown in the photos I showed you previously – will be built up, in stone, above the roofline, with the edges of the tin embedded in the cement. This keeps the wind from getting under the roof and prevents the roof from drifting from center.

Another look at Bill’s barn roof

And here, we would like to add a little reflection on the difference between the BS you find in politics and economics – even here in the Diary – and the non-BS world of barn roofs.

No BS in Bridge-Building

“There’s something very attractive about a man when he is focused on his work,” said Elizabeth as we were getting off the ferry from Ireland. She was, alas, not recalling her husband’s burning stare at two-by-fours and two-by-sixes… nor his almost-maniacal drive to get the job done before his ship sailed.

She was watching how the stevedores managed traffic on the lower decks.

“When a man is really working, you sense his whole attention directed towards his work. That is how the world we live in was built.”

The ancient Roman aqueduct at Segovia, Spain, for example, is breathtaking – with its many arches. Supposedly built under the Emperor Trajan in about 100 AD, it is still in use.

The bridge at Pont du Gard in France is even older. Of similar construction, it is a triple-decker of stone arches – one on top of the other, elegantly complex, and a marvel of engineering – that carried water to the ancient city of Nîmes.

How is it possible for masons and architects to build bridges that last two millennia… and 1,500 years more than the empire that financed them?

There is no BS in bridge-building. The feedback loop is so dramatic and conclusive that it eliminates the kibbitzers.

A bridge stands. Or it falls.

During the Roman era, the architect of a bridge stood beneath it as the scaffold was removed. If he did his job poorly – using fake calculations, humbug statistics, or claptrap theories – it would fall on his head.

Surviving architects and builders took notice. “I won’t do what he did,” they said to themselves. They learned from past mistakes. They accumulated knowledge and wisdom – which became almost instinctive in their trades.

Bridges still fall down from time to time, but rarely.

Likewise, our barn roof will either stand or fall. We bet it will be there long after the asset bubble, the fake dollar, the trade war, $115 trillion in excess debt, and Donald J. Trump are history.

In politics and economics, BS is all there is. The calculations are almost always fake; the statistics are quackery; the theories are devilish nonsense. And bad ideas never entirely disappear, they just re-emerge after a few years… often dressed in new duds.

Socialism – which should have been thoroughly discredited when the Soviet Union fell on the heads of its architects in 1989 – is back.

She recently beat the Democratic incumbent in the primaries and will almost certainly be going to Washington come the November elections.

The national socialism of Hitler and Mussolini is back, too – now commonly known as crony capitalism or nativist protectionism.

And the strongman politics of Chávez, Perón, and Castro now have two new leading men: Putin and Trump.

Once limited to the Third World, the wogs, and the crackpots… these creeds are now in the U.S. mainstream.

We have learned over and over again that fake money – whose value or quantity can be manipulated by the authorities – always leads to disaster. (Rome… France… the Weimar Republic… Yugoslavia… Zimbabwe… Argentina… Brazil…)

We know that protectionism leads to higher prices and poverty. (Does anyone remember Misters Smoot and Hawley?)

We know that the government that governs least, governs best. (Does anyone recall Thomas Jefferson?)

We know that you can’t spend more than you earn, you can’t start wars, and you can’t force win-lose deals on others… without paying a heavy penalty. (Hey… check out World War II.)

But heck, we’re going to do it all again anyway… and learn the same lessons all over again.

Advice to readers: Don’t stand under the bridge.

That’s the story of today’s chart, which maps Apple’s market cap from the start of 2008 through today. 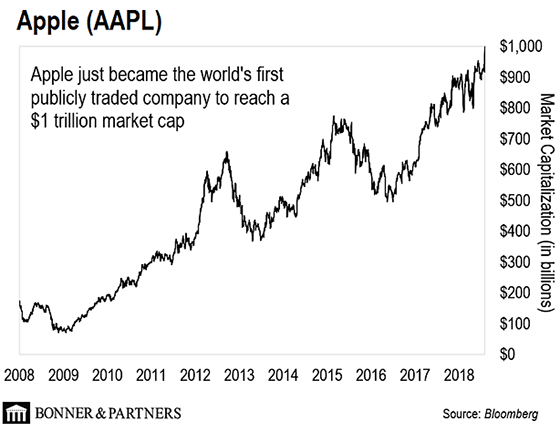 As you can see, Apple’s market cap fell below $100 billion during the dark days of the 2008 financial crisis.

But the company’s market value steadily increased over the next decade to finally hit $1 trillion on August 2, 2018.

That means the market capitalization of one publicly traded company is now roughly equal to 5% of America’s GDP… and exceeds the GDP of countries like Turkey, the Netherlands, and Saudi Arabia.

How Socialism Comes to America
As Bill outlined above, more and more political candidates are openly identifying as socialists. Casey Research’s Nick Giambruno believes this political trend spells trouble for America’s economic future. And he thinks he knows where it all started…

A Very American Trade War Victim
The casualties of the trade war are piling up. Now, a new victim comes to light, and it’s as American as it can get: blue jeans.

America’s Looming Debt Headache
As Bill reported earlier, revised estimates from the White House show that the government could soon be in the hole for $1 trillion each year starting in 2019. To fill the gap, more and more Treasuries are going on sale. But this flood of bonds could have implications for rates and, by extension, the stock market.

Today, a mixed mailbag; Trump, trade, and the end of the Republican Party…

Regarding your comments on The Donald’s tweets on Koch and the Republican Party: Living outside of the U.S. perhaps changes the perspective somewhat. The Koch brothers have the means and ability, it seems to me, to have exposed the corruption of the U.S. government – state and federal – many years ago, even if within the Republican Party only. They clearly did not, and I assume from this that they have no intention of doing so. Sort of knocked their credibility somewhat.

The Koch concept of “free trade” is a chimera, so long as terms and conditions are not reciprocal. Since World War II, the scales have been weighted toward the USA’s “trading partners.” Access to their markets has been neither “free” nor “fair.” The actual impact of those trade deficits and “conditions” will never be fully known. The financial costs are the least of it; the societal costs cannot be quantified.

While President Trump’s “remedial approach” with our trading partners is heavy-handed, it has had to be… just to get their attention. Words – decades of negotiations – had failed. Until the specter of actual consequences – i.e., tariffs and “conditions” – became real, the other side had no incentive to change a most favorable circumstance.

As anticipated, first, they responded with bluster and counterthreats. Then, they realized that the past is not prologue to the future with the Trump administration. Hence, negotiations began. I would point out that actual tariffs have been effected on only a few items and trading partners… so far.

It sounds as though you put your personal opinion in these reports about our president. You keep saying Mr. Trump instead of President Trump. I am a retired, blue-collar worker and a disabled veteran, and when I am reading your reports, I feel as though you have no respect for our democracy. I don’t care about all the nasty bickering, just the facts and making money. Please try to give us something we can use.

Good riddance to the neo-conservatives. Rather, a new beginning for the true conservatives; a rebirth. For the ultra-liberal Democrats, it’s all over, except for the funeral. Time for the Truman Democrats to reclaim their party. You will see miracles when these transitions occur. Conservative Republicans work well with moderate Democrats.

If you continue to bash Trump, you only show yourself to be a globalist who wants to protect the elite international corporations. If tariffs mean less profits for them and a higher standard of living for the American worker and the overall U.S. economy, then that is a good thing! Constantly trashing Trump shows a small-mindedness that is unbecoming.

If there is one thing that George Will is not, it is a Republican. At least, he hasn’t been one for a long, long time – in my opinion.

Charles Koch versus Donald Trump? I say a duel at dawn. And may both their aims be true.

As a former corporate banker, he was forced to play by Wall Street’s rules.

And now, for the first time, he’s inviting everyday investors to join him on something he calls the 100-to-1 Project. Get all the details here. 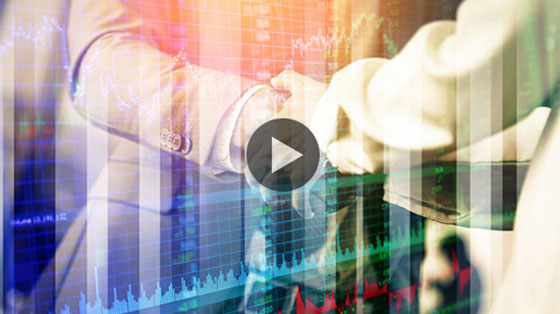