Editor’s Note: In 1971, President Nixon severed the final connection between gold and the U.S. dollar. Regular readers know that Bill has long warned of the unseen side effects of this decoupling.

Today, Casey Research’s globetrotting analyst, Nick Giambruno, shows one more threat posed by America’s “fake” money, and reveals what you can do to protect yourself.

This was the rallying cry of what eventually became the largest fast-food strike in U.S. history.

It all started in late 2012, when over 100 New York City fast-food workers walked off their jobs, demanding higher wages.

Many made minimum wage. They were struggling to make ends meet as rent, utilities, medical care, and the overall cost of living continued to rise much faster than their wages.

The “fight for $15” movement quickly spread across the country.

But the “fight for $15” is only one symptom of a much larger epidemic.

Polls suggest that a majority of millennials (people born between 1982 and 2004) now favor socialism. And a growing number favor outright communism – if it’s implemented “correctly.”

By next year, millennials are expected to surpass baby boomers as the nation’s largest living adult generation. This is one of the reasons Bernie Sanders and other socialists are growing in popularity.

The Chair of the Democratic Party recently declared a young millennial socialist who won a New York City primary “the future of our party.”

On top of that, Sanders and his fellow socialists are offering a dangerous gimmick. It’s something called a “universal basic income” – or UBI, for short.

It’s where the government gives you money, just because. There’s no requirement to work or even display a willingness to work. You could sit at home all day, watch TV, and still get a check from the government.

Remember: Even people living under communist regimes have to work. But with a universal basic income, the government simply hands out “free” money to everyone for doing absolutely nothing.

All of this points to an increasingly radical political environment that will have serious financial consequences in the future. And I believe I know the cause…

Inflation is the primary factor driving this trend. Americans feel squeezed because the cost of rent, medical insurance, and tuition – as well as other basic living expenses – is rising much faster than their wages.

This creates very real problems for ordinary people. In response, more and more turn to Santa Claus politicians that promise supposed freebies, like a $15 minimum wage or universal basic income.

This is all a predictable consequence of the U.S. abandoning sound money.

By every measure – including stagnating wages and rising costs – things have been going downhill for the American middle class since the early 1970s.

August 15, 1971, to be exact. This is the date President Nixon killed the last remnants of the gold standard.

Since then, the dollar has been a pure fiat currency. This allows the Fed to print as many dollars as it pleases. And – without the discipline imposed by some form of a gold standard – it does precisely that. The U.S. money supply has exploded 2,106% higher since 1971. 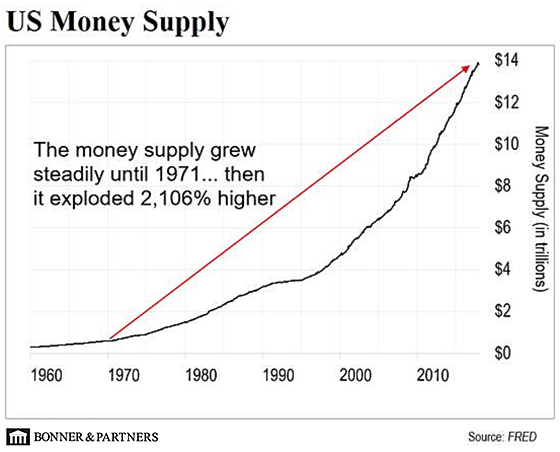 The next chart illustrates this dynamic. It measures U.S. hourly wages priced in gold grams (the number of gold grams the average person’s hourly income could buy). 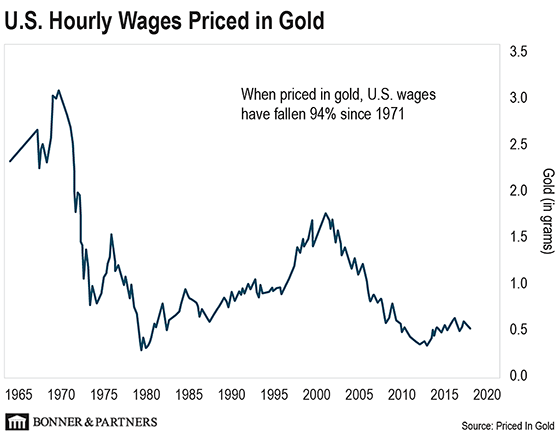 And the following chart measures the federal minimum wage in terms of gold grams. Priced in gold, the minimum wage has fallen 87% since 1968. 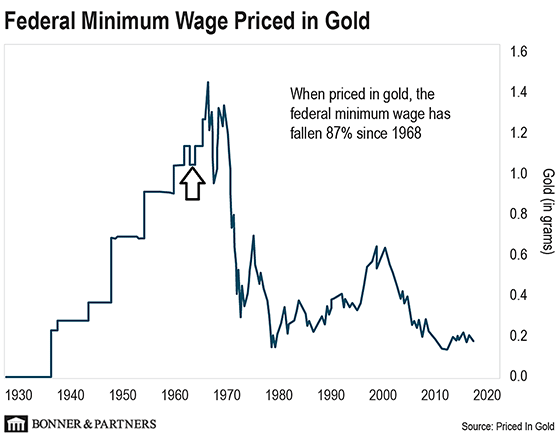 This is why millennials – and millions of others – are gravitating toward socialism.

They feel the economic pain of inflation every day. They know it’s becoming harder and harder to maintain a middle-class lifestyle. They just don’t understand why. So they succumb to the siren’s call of freebies.

Perverse as it is, the policies demanded by people suffering from inflation create even more inflation.

Inflation has a way of perpetuating itself. The more inflation reduces living standards, the more people push for programs that create even more inflation. These include things like a universal basic income and a higher minimum wage… which, in turn, create a cycle of inflation.

What people should really fight for is a return to sound money. It’s the only way to end this insidious cycle. But that’s not going to happen.

Inflation follows a clear a pattern of corruption:

At this point, we have to ask ourselves whether the political situation in the U.S. will improve. Unfortunately, the data points to a troubling, but inevitable, answer: No.

The reason is simple: A growing majority of U.S. voters is addicted to the heroin of government welfare.

An estimated 47% or so of Americans already receive some form of government benefit. But I don’t think that accurately reflects the situation – at least, not when you consider all the government employees, along with those in the nominally private sector who feed off the warfare state. This includes defense and other government contractors who win huge, no-bid contracts.

People involved in the military-industrial complex live off government slops as much as, or even more than, those who collect food stamps and other traditional forms of welfare. Yet, they’re not counted in the statistics. An honest account of who depends on the government needs to include them.

When you count everyone who lives off of political dollars, we’re already well north of 50% of the U.S. population.

In other words, the U.S. has already crossed the Rubicon. There’s no going back.

How to Protect Your Wealth

There’s nothing you or I can do to meaningfully reverse this trend. But there are things you can do to protect your own wealth.

Owning some physical gold is step one. This is something everyone should do.

Gold is the ultimate form of wealth insurance. It’s preserved wealth through every kind of crisis imaginable. It will preserve wealth during the next crisis, too.

The price of gold tends to be inversely related to the value of the dollar.

So I expect gold to soar in the years ahead as the political inflation cycle plays out.

P.S. In addition to physical gold, you’ll also want leveraged upside to grow your wealth. For that, I suggest looking to companies that mine precious metals. I recently recommended a basket of mining stocks to readers of The Casey Report that do just that.

I expect these companies to soar in value as the purchasing power of the dollar erodes and people flock to precious metals to protect their wealth. You can read the full issue, and get a book from Casey Research founder Doug Casey, by going right here.