GUALFIN, ARGENTINA – We are a-wandering… searching high and low… looking for ourselves.

Yes, that is what travel is all about: trying to find out who you are.

Rule of the Mob

And we begin by looking in our back pocket. There, we have a copy of Polybius’ history of what he calls the “Hannibalic Wars,” the wars between Rome and Carthage, in which the Carthaginian general, Hannibal, played a leading, but tragic, role.

Not much has changed. Polybius, circa 150 B.C., believed a noble republic inevitably degrades into a sordid spectacle of power grabs, intrigue, double-dealing, and lies.

“The masses,” he says, “believe they have a grievance against the greed of other members of society…” They will impose their will in the name of “freedom and democracy” but the nature of it will be “the worst of all, that is the rule of the mob.”

Polybius… if you’re listening… we would like to update you on the situation of the United States of America, circa 2019:

Today, the mob thinks it has been done dirty by the elite. It is right.

But it is unaware of how the dirty was done, and so, its efforts – on both sides of the political divide – are ineffectual, irrelevant, or deleterious.

On the right, Republicans believe tax cuts, walls, and trade deals are the winning formulae.

But the tide seems to have turned in favor of the left, where Democrats try to outdo one another with tax hikes, freebies and fabulous something-for-nothing schemes.

And look what has floated in, among the flotsam, to the town of Stockton, California; it has its own plan to right the wrongs done to the poor. The Sacramento Bee:

After months of planning, Stockton, Calif., is sending debit cards loaded with $500 to a select group of residents starting Friday as part of a closely watched experiment in universal basic income, the first led by a U.S. city.

Stockton, once dubbed “America’s foreclosure capital,” was the largest city to seek bankruptcy protection before Detroit’s 2013 filing. During the recession, unemployment soared toward 20 percent, and violent crime rose. Today, one in four residents lives below the poverty line, according to the U.S. Census Bureau.

They won’t be the first to do the experiment. Rome, after Polybius’ death, fulfilled his prophecy.

It famously provided “bread and circuses” to the urban proletariat. Gradually, the sturdy farmers and independent yeomen who had been the backbone of the Roman army disappeared, replaced by slave labor and a dependent mob; the republic slid into the swamp of a degenerate empire.

Finally, the empire was forced to hire the foxes to guard the henhouse, enrolling the barbarians to garrison the frontiers.

We all know how that turned out.

More recently, Finland wanted to see what would happen when it gave residents a guaranteed income, no strings attached.

One hypothesis was that the extra money would be spent, thus encouraging businesses to increase output and hire more people. “Stimulus!” shouted the humbug economists.

Alas, the Finns were wasting their time and money. Giving to people encourages recipients to loaf.

Employment did not go up, the Finns reported last week.

Stockton is wasting its time and money, too. But why not?

And here, bear with us, Dear Reader. Here, let us pretend that trying to help people by giving them money actually does help them. (We know it often does not.)

But what are time and money for, if not to help others?

Suppose your daughter lived in Stockton. Suppose she was unemployed… and trying to support small children on her own. You’d be happy she got a little help, wouldn’t you?

Well, how about helping someone else’s daughter? Would you be willing to do that? In your own family? In your own hometown? In your own state… And your country? How about people in Syria? Or Bangladesh? Or Nicaragua?

What kind of person are you, Dear Reader?

Most people are willing to pay taxes to help “us,” but not “them.” Most think it is perfectly logical to stimulate “our” economy, but not theirs. And increasing employment in our city? county? state? country? But not theirs?

And some people are even willing to die for “us,” but certainly not “them.” Which, of course, only raises the question: Who are you?

And this is where our restless feet begin to twitch. All it takes is a glance around the world to see that the BS, claptrap and scams are fairly evenly distributed – the social welfare giveaways… the soak-the-rich taxes… the military boondoggles… the scammy currencies… the bogus budgets… the ersatz “stimulus”… the counterfeit programs to lift up the poor and cast down the rich…

…and become wobbly on the whole “us vs. them” proposition.

“To hell with them all,” you might want to say…

That’s the story of today’s chart, which tracks the price of gold from the start of 2018 through today. 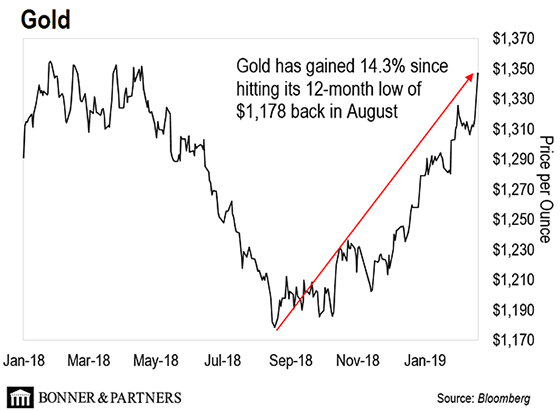 Gold’s bull run gained strength last year as the S&P 500 began its nearly 20% plunge from September 20 to December 24… showing that the market still values gold as a safe-haven asset. But the safe-haven trade is not the only dynamic at play…

The market now recognizes that the Federal Reserve is not likely to raise interest rates further. In fact, the futures markets are predicting only a 20% chance of another rate hike in 2019… And they are predicting a 50% chance of a rate cut in 2020.

This dovetails with our suggestion last month that the Fed was much more likely to follow up its “pause” with rate cuts – leading it to make Bill’s “Mistake #3.”

And that is great news for gold.

Because gold offers no yield, it becomes less attractive to investors when interest rates rise, pushing up the yield on fixed income investments like bonds and CDs (certificates of deposit). But when rates fall, gold becomes a more attractive option for investors looking to park their money somewhere safe.

If the Fed has abandoned its “normalization” policy, as Bill expects it has, then gold stands to go higher from here.

How to Soak the Rich
As Bill wrote, a host of ambitious politicians are promising to stick it to the rich. What, precisely, is on the table? Here are the highlights…

The Hackable Blockchain?
Blockchain technology is touted as a distributed, unhackable ledger. In other words, there’s no one point of failure, so bad actors should have no weak point to exploit. That’s the hope anyway…

On Saturday, Bill and Dan Denning revealed what they learned at an invitation-only meeting, just blocks away from the White House. As Dan put it, “I’ve never seen Bill Bonner get that angry.” In the mailbag, dear readers weigh in…

Dear Bill and Dan, my guess is your anger is a result of your basic frustration… and you’re frustrated because you also can’t figure out what to do yet, but you feel in your bones that more regulation is not the solution.

I know you are an anti-government fellow, but clean water and clean air seem like pretty wide benefit values, worthy of good strong laws. Any company that puts their profits above your and my clean air and water is a crook. Another wide benefit value would be somehow limiting companies’ ability to privatize profit while they put the liability on all of us taxpayers. Thanks and keep the letters coming.

Hi Bill and Dan, I just finished reading this report on your meeting in Washington. I read many of your reports and analyses. I really appreciate the insights and the perspective you use to decipher what’s really going on and how it all is affecting us, the working people of America. Solutions to these problems are not easy to come by or to implement, especially considering the skewed views of culture so many of the “movers and shakers” and that of many of the common people in our country seem to have and advocate. Basically, I just wanted to thank you for sharing your perspective with us and for trying to advocate for the things some of us would like to see promoted.

I think you are insightful, as always. Regulators will always be captured by industry. And politicians will always create more and more regulations, since that is how they got into office. Have you read the nationally best-selling book by Hedrick Smith entitled The Power Game? It depicts how the defense industry captured politicians during the Reagan years, by what Smith called the “Iron Triangle.”

Today, I believe all elected politicians are captured by special interests, which funnel millions of dollars into political campaigns, ensuring that only the well-funded, captured politicians win. It is no longer just the defense industry which funnels millions of dollars into political campaigns. Nowadays, all the large industries do it. Unless the political finance system is reformed, no significant changes will be enacted, as the politicians remain beholden to the industries that got them elected and will get them re-elected.

Keep up the good work! If you were to run for president of the U.S., then I would vote for you.

Hi Dan. Thanks for your story about New Zealand. Having lived there for 28 years, now living in Mission, British Columbia, Canada, I hope you are not missing out on Hawke’s Bay, which is probably the most exciting area to visit. I lived in Havelock North and I just noticed that the house I built there is on the market. You should check it out. I will give you the phone number of some very special friends if you decide to make the trip. Cheers.

I am a subscriber living in the New Plymouth area of New Zealand. Thanks for visiting our beautiful land. I’m involved in an amazing project in the area. It’s called Green School New Zealand. A community is being built here for conscious families based around a new education style of consciousness and creativity. Plus the region is beautiful.

If you’re done with cryptos… weed stocks… or options, then go right here.

Our friends at Casey Research have uncovered an entirely different way to potentially make 1,000% this year. Full story right here.