Dear shadows, now you know it all,
All the folly of a fight
With a common wrong or right.
The innocent and the beautiful
Have no enemy but time;

YOUGHAL, IRELAND – We left you on Friday as we set off on a drive down the west coast of Ireland.

We’re showing family around the island… and discovering it ourselves.

First stop was Lissadell House in County Sligo… in which we learned how a great family can ruin itself.

What Goes Around Comes Around

The English conquered Ireland in the early 17th century and then divided it up into vast plantations.

In 1622, Paul Gore, an English commander, was given a vast stretch of land in the north of the island in County Donegal, where your editor’s family is from.

And by 1900, Sir Henry William Gore-Booth, father of Eva and Constance, was one of the richest men in Ireland with 32,000 acres.

But what goes around comes around. And fortunes have a way of going as well as coming. In the early 20th century, the Anglo-Irish were losing their grip on Ireland… and Sir Henry’s family was losing its grip on reality.

We have been interested, of late, in the intersection between politics and money. It is a dangerous one… with frequent accidents.

Most often, paying attention to politics is a mistake. Politics is a win-lose business, while money is mostly win-win.

In the modern world, it is work that pays, not war. You make money by offering something to others. Your time, your attention, your savings, your inventions, or your innovations – generally, the more you give, the more you get.

Meddling in politics merely distracts and misleads you; the more you force others to give at the point of a gun, the less you have to give in return.

Politics creates no wealth. It merely “redistributes” it – from those who earn it to those who end up with the stolen goods.

At the low end, social programs redistribute trivial amounts. The zombies get enough to live on… but not much more.

At the high end, a few cronies get rich from federal scams. But not many. It’s a tough game, because you’re competing with other cronies… who are often more ruthless than you are.

In 1917 Russia, for example, there was no use trying to pick the best stock or the best bond… or trying to get a good deal on an apartment on Nevsky Prospekt.

There were macro-trends afoot… hideous political movements… that made win-win deals a waste of time. Whatever gains you were able to make would soon be taken away.

Likewise, there was no use speculating on waterfront property in Pompeii in AD 79… or trying to find the right spot for your noodle stand in Hiroshima in August 1945.

If there was a “crime behind every fortune,” as the French novelist Balzac claimed, the crime of the Anglo-Irish was obvious. Their fortunes came from war… win-lose deals of the worst sort – purchased with the blood of Catholic Ireland.

In the cathedral at Cashel (also on our route) in 1647, for example, Protestant forces butchered 1,000 soldiers and civilians. Altogether, as many as half the people in Ireland may have died in Cromwell’s campaigns – more than 600,000 dead from slaughter, disease, and hunger.

The Anglo-Irish stole their property fair and square, in other words. Three centuries later, they could hardly complain. They had enjoyed their Big Houses and great estates… and their status, prestige, and wealth… since the reign of Elizabeth I.

Crime paid. But it was time to pay attention to politics.

The Easter Rising in 1916 – in which Constance Markievicz, one of the women of Lissadell House, played an important role – was the beginning of the end.

Five years later, Ireland was independent of Britain and the tables were turned. Politics had created the big estates. Now, politics broke them up – with a combination of taxes, forced sales, and seizures.

Many, if not most, of the Big Houses were unable to support themselves on the little land that was left to them. Many were abandoned and left to rack and ruin.

Some were sold off and converted to housing, hotels, or golf clubs. Others were taken over by local and national governments.

And while politics doomed the Big House of Lissadell, so did it doom the family that had lived in it for so many years.

Henry Gore-Booth left behind a motley crew, including his daughter, Constance, who married a Pole and later joined the Irish rebels in the Easter Rising.

Thus, so dramatically engaged in politics, the whole family seemed to take its eye off the road. A few years later, it was in the ditch.

The Anglo-Irish – who had gained so much from conquest – felt they should fight for the English wherever they were engaged. St. Patrick’s Cathedral in Dublin, for example, is stocked with monuments to the soldiers who died in India, South Africa, and America.

Fighting for the English made no sense for the Irish… But for the Anglo-Irish, it was a matter of pride and habit. In World War II, Ireland remained neutral. But the Gore-Booths and other Anglo-Irish gentry sent their young men to war anyway.

Lissadell lost two of its scions in the war. Another came back unable to fully function. By then, the family was full of political activists, poets, eccentrics, world improvers, and artists. But it had no one who could hold the house and the family together.

In 2004, the family put the house up for sale; it ended up in the hands of a charming couple from Dublin, who’ve opened it to the public and spend their time fixing windows and planting vegetables.

The façade of Lissadell House in County Sligo, Ireland

And now, the plain people of Ireland, who used to tote wood and carry trays in the Big House, traipse through, at six euros a ticket, and gawk at how the ruling class used to live. 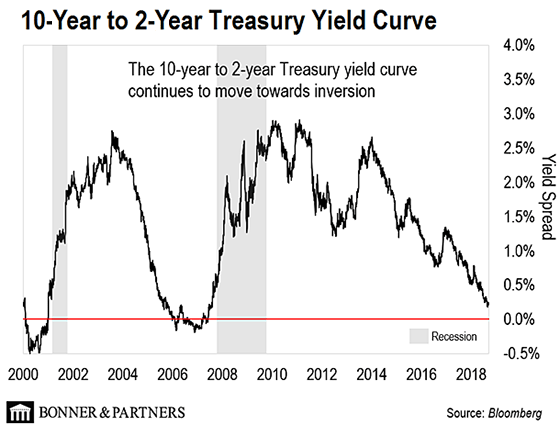 A higher reading on this chart means that the difference between the two yields, or the “spread,” is increasing. A lower reading means that the yields on the 10-year and the 2-year bonds are starting to converge…

And when the reading goes negative – known as an “inverted” yield curve – it means that 2-year Treasuries yield more than 10-year Treasuries… As you can see from the chart above, an inverted yield curve has preceded both previous recessions.

That’s because in a healthy economy, yields on longer-term bonds should be higher. This compensates investors for the risk they take when lending money out over a longer period.

But an inverted yield curve signals that short-term risks are higher than long-term risks… which suggests investors see trouble brewing in the economy.

We first reported on this dangerous trend back in July… and it has only gotten worse. The spread between 10-year and 2-year Treasuries has fallen 19% over the past two months.

The 10-year to 2-year Treasury yield curve is now within 21 basis points of inverting.

Coca-Cola Eyes Cannabis
Coca-Cola is on a mission to transform itself from a “soda company” into a “beverage company.” The company has made some high-profile acquisitions of alternative beverage start-ups in the past few years. Now, it’s eyeing another target: cannabis drink producers.

California’s War on the U.S. Dollar
A new American civil war may be brewing. And the epicenter of the coming crisis could be in California’s Bay Area, where a local government initiative is poised to undermine the power of the U.S. dollar.

In the mailbag, Bill’s Friday Diary, “America’s Economy Is on a ‘Suicide Mission,’” gets readers talking…

Bill Bonner’s columns are greeted with a smile from me, as his analogies tend to allow for a mirthful laugh. Take his recent column titled, “America’s Economy Is on a ‘Suicide Mission,’” which begins with a beautiful poem (“The Second Coming” by William Butler Yeats), analogous to America’s current economy.

Today’s mirth came from Bill’s analogy with regard to politics: “But today, politics exerts a rare and pernicious pull on the money world, like a dark star tugging a planet to its death.” As politics becomes further entwined with economics around our planet – from Argentina to Greece, then on to Venezuela – more and more countries will likely succumb to the pull of a global economic collapse. As Bill suggests, “We will see where we end up.”

Your Diary on September 13 was one of the greatest ever. I have to agree with Anonymous about what your prospects for the presidency would be. You spoke about the Dow-to-Gold ratio, and that was exceedingly important. I’ve been critical in the past, speaking about how reading you was lose-lose-lose-lose ad infinitum. But today was win-win. Thank you.

I would just offer one correction. The things you are calling “mistakes” are not mistakes. A mistake would be not realizing that Yeats’ poem about the swans “upon their clamorous wings” is about life and death. The criminals of TARP – including Bernanke, Geithner, Paulson, and even Obama and Bush – were actors in a wide-ranging criminal conspiracy à la “True Rico.” They should scatter wheeling in great broken rings. I encourage your readers to forsake their leadership eternally.

How much growth in the U.S. economy is needed in the next four years to meaningfully offset the impending debt crisis? If the Fed leaves interest rates where they are – to allow the economy to grow faster – rather than raise them to slow growth under the guise that inflation is bad, won’t financial matters turn out better? What about alternate solutions – like backing the dollar with more than a promise that the dollar is backed by the full faith and credit of the U.S. government and taxes on U.S. citizens?

I’ve heard rumors that China, to increase its economic standing in the world, intends to back its currency with some kind of basket of hard assets to be the reserve currency for international transactions, replace the U.S. dollar, and control world banking transactions. Any thoughts on these matters?

Dear Bill, please give us your suggestions on how to best survive the catastrophic collapse that is coming. Thank you!

Editor’s Note: Dan Denning, Bill’s right-hand man and coauthor of The Bill Bonner Letter, has made it his mission to prepare readers for an unknown and unknowable future. That means helping you secure your wealth and your liberties from a financial and political system that’s vulnerable to collapse. For a few tips from Dan, catch up right here.

Bill is headed to Bermuda for the first-ever Legacy Investment Summit in the weeks ahead. And he asks you to join him…

And it’s not just Bill.

Some of your favorite Bonner & Partners editors like Jeff Brown and Dan Denning will be there.

There’s still time to save a seat – and receive $1,000 in bonuses to join us. Details here.