NEW YORK – Salvator Mundi, said to be by Leonardo da Vinci, is the world’s most expensive painting.

Last Wednesday, at auction, each square inch was valued at nearly $1 million – including the bummed-up, restored, and damaged parts.

The painting may not be da Vinci’s work. Or perhaps, since it has been so heavily doctored up, little remains of his work. And whoever’s work it was must have been having a bad day.

And yet, it sold for over $450 million (including auction-house charges) – a lot of money for such a depressing work of art.

The question on the table: Why?

But since we don’t know the answer to that question, we’ll answer another one: How come so many people have so much money?

Made in the Middle

Though billed as a “middle-class tax cut,” the middle class gets almost nothing from the proposed plan.

Instead, almost all the benefits go to: (1) business owners, and (2) the rich.

And since the feds are unwilling to cut spending, the middle class ends up with about $2.2 trillion of extra debt, which it will have to reckon with eventually.

We bring up the tax cut because we think it helps explain the painting. Not for nothing are Republicans and the modern Salvator Himself, Donald J. Trump, setting up the middle class for a huge bamboozle.

Our train ride yesterday – the Acela Express from Baltimore to New York – was subsidized by taxpayers from all over the country.

In between is nothing but poverty and dereliction. There are factories that last made a product in the ’50s. There are workers’ houses almost unchanged in half a century. There are abandoned warehouses… wrecked cars… junk steel… and burly men in orange vests working with machines.

The middle is where real work was done and real things were made, shipped, and distributed; it shows few signs of growth or prosperity.

It is as though a sausage had been squeezed in the middle, driving the rich meat to the ends. In between is lean… and greasy.

Every crime scene has many fingerprints on it.

Most are of the innocent.

An aging population, for example, is not exactly something you can do anything about. Technological innovations, too, are largely beyond public policy control.

But there’s one set of fingerprints on the tax cut flimflam… the relative poverty along the Northeast Corridor… and the $450 million painting: the Deep State’s.

The insiders use fake money – the post-1971 dollar – to transfer wealth and power from the people who earn it to themselves. It is as though they loaded up the train in Newark and Trenton… and shipped everything to Washington.

You earn real money by making real things and providing real services. But fake money is different. You don’t earn it by adding to the world’s wealth.

You get it by subtracting from it… that is, by borrowing from future output.

Real money is not controlled by anyone. It is earned – freely – in win-win exchanges. Back in the 1950s and 1960s, it ended up in places like East Baltimore and Trenton because they used to make things people wanted.

But fake money takes a different route. It is created by the insiders… and controlled by them. It goes where they want it to go.

Money always bows to politics; often, it is completely beholden to it.

So, it is hardly a surprise that the latest tax proposals favor the Deep State at the expense of the middle class.

Readers may argue that the money “stimulates” the economy… and that it “trickles down” to the common people. If so, there is little evidence of it.

As a percentage of the working-age population, fewer people have jobs today than at any time since the 1970s. Back then, the typical man had to work 900 hours to earn enough to buy a new pickup truck. Today, he has to work 1,500 hours.

Central banks have increased the world’s monetary base (and their own balance sheets) by $20 trillion so far this century.

This money didn’t go to the fellow in the orange vest. Instead, it went to Russian tycoons… Chinese billionaires… art collectors… hedge fund managers… and rich people on both ends of the track.

Editor’s Note: Today, Bill shares the view from his trip to New York.

The U.S. dollar is staging a comeback…

Today’s chart is of the U.S. Dollar Index. This tracks the exchange value of the buck versus a basket of six major trading-partner currencies.

A falling line on the chart means the dollar is weakening versus its rivals and vice versa. 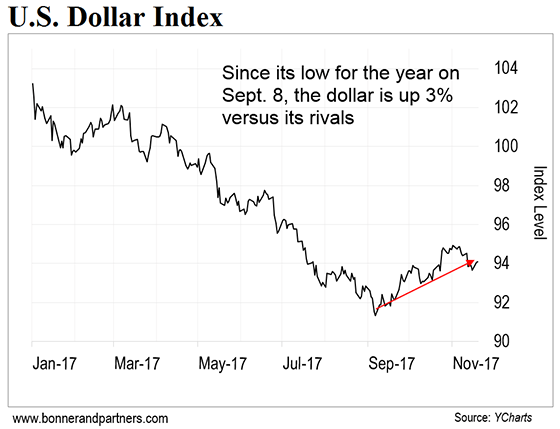 As you can see, for most of 2017, the dollar has been weakening versus its rivals.

Credit Card Debt Piles Up
Americans now have more credit card debt than ever before. And new data suggests that many credit card holders are falling behind on their payments. And that could spell trouble for the economy.

The Buyback Goes Bust
Buybacks are when companies purchase shares in their own business from investors. This reduces the number of shares outstanding and often boosts the value of the remaining stock. But buybacks have been disappearing in recent years. And it could be for a curious reason…

Why the Deep State Needs Saudi Arabia
Saudi Arabia has initiated a political crackdown in recent weeks. But the United States will be sure to steer clear of the whole ordeal. Casey Research’s globetrotting analyst Nick Giambruno reveals why.

In the mailbag, a reader considers what the proposed tax reforms would mean…

With all due respect, you are only half correct on this one. You are absolutely correct that a tax cut without a corresponding spending cut is fiscal suicide. But the half that you are wrong on is when you say that the tax cut will not stimulate the economy. Tax cuts of any kind always stimulate the economy because every dollar not taken by the government stays in the economy. That’s just basic logic.

But what you appear to have missed is that corporate tax cuts not only stimulate the economy, they create jobs. That’s right, they create jobs. The good ol’ U.S. of A. currently has the highest corporate tax rate in the world. That is sick, but it is also the reason why the smart corporations have already moved offshore (Why is your company still incorporated in the U.S.?). If we lower the corporate tax rate, there is less incentive to move offshore, and more incentive to bring corporations back to America.

Okay, the cuts do not create jobs, they move the jobs from other countries to America. But if you are an unemployed American, it’s American jobs that you are worried about, and a corporate tax cut is the only way to bring those jobs back to our shores. Now don’t get me wrong, I’m not convinced that the tax bill will be worth a damn by the time the House and Senate get finished gutting it to a final version. But at least they are talking about the cuts, which is an improvement.

Now to get them to start cutting spending – and again, we agree… it isn’t going to happen. Love your writing; keep it coming.

Here’s something you may not know: The market for new cars in America is larger than the market for smartphones, TVs, and PCs – combined.

Now, one of Bill’s top analysts is predicting that this massive market will soon be upended. And that means the potential for enormous profits for early investors. See how here. 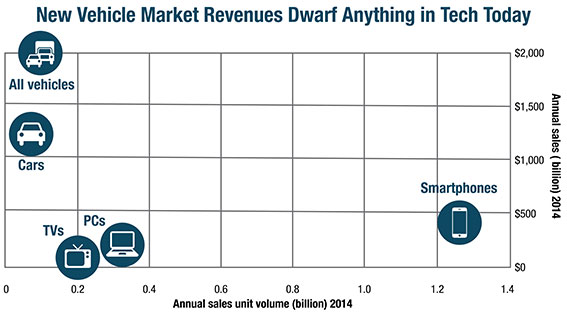