Back in grade school, a teacher once told us that “anybody can grow up to be president.” In 2017, Donald Trump proved it.

In high school, we learned that “anything can be used as money.” In 2017, bitcoin proved it. (In yesterday’s Wall Street Journal, a full-page ad offered a house in the Caribbean for 400 bitcoin.)

And in college economics, we were told that “interest rates couldn’t fall below the zero bound.” In 2017, we learned that it wasn’t so.

The last of these remarkable items suggests a remarkable choice: Either it really is a New Era in which the sun stands still (among other peculiar things). Or price discovery (the process of finding out what things are worth) has filled up with more lies than a cheap dating website.

This is unremarkable. That’s what honest markets do as they try to discover what things are worth: They go up and down.

But if we look a little harder, we see the lies attached, like wires to a puppet.

The article tells us that stock prices rose all over the globe by an average of 22%, adding almost $10 trillion in market value by the end of the year.

Globally, for stocks, 2017 was the biggest year ever, edging out 2009, when world markets “created” an extra $8.1 trillion “as global markets rebounded from the worst of the financial crisis.”

In 2017, markets weren’t rebounding from any crisis. They were just adding to already fulsome prices. So what’s going on?

First, where did that $10 trillion come from?

And second, we confidently assume that the earnings of the companies traded on the world’s stock markets did not change much from January to December.

World GDP rose by about 3%. The output of goods and services must have gone up a similar amount. Some corporations must have done better; some worse. On the whole, they might be worth 3% more than they were at the start of the year.

So how could their stocks go up seven times as much?

Are these prices the result of honest price discovery? Or have they been jerked higher by the feds?

Wealth can be increased or decreased. But it takes work, savings, and time. And at any given moment, the quantities of tractors, ham sandwiches, and Van Gogh paintings are fixed.

Back in the early 1980s – before the wealth transfer scheme began – an investor needed about 70 units of the Dow to buy one average house. Now, with 70 units, he can buy five houses.

Likewise, an investor back then needed only two units of the S&P 500 and he could employ the average working stiff for a week. Now, his two units will buy him six working stiffs for five days of labor.

What counts is not the dollars in your pocket… or the stocks in your broker account… but how much of a claim they give you over the available wealth at that time.

In a normal stock market, some stocks go up; others go down. When a single stock goes up, its owners are a little richer than other investors.

But when the whole stock market goes up, it must go up against somebody else’s stuff… That is, if investors are getting richer faster than the real growth of goods and services, they must be making someone else poorer. Who?

We can see the results regionally as well. The working stiffs are getting the short end of the stick. The Atlantic:

Broadly, in an economy dominated by politics and fake money, you do well – like a gulag prisoner who lands a job working in the kitchen – when you’re near the centers of power.

Otherwise, you lose… Because “financialization” – feeding cheap money to Wall Street – is not an economic policy; it’s grand larceny.

Which helps us understand Remarkable Event No. 1: Donald Trump.

Time magazine threw away its best annual cover story – Person of the Year – for 2017.

It named the “silence breakers,” women who came forth and claimed to be victims of sexual harassment, as the most important people of the year.

But that men are often cads or creeps is not exactly news. And the women who denounced them in 2017 – with the full backing of the politically correct press – were not exactly martyrs who were committing acts of great courage.

The cover story should have gone to Donald J. Trump. Reckless, impetuous, big spending, big mouthed, vain, incompetent, unthinking – he is just the sort of oaf an earnest Time editor would like to ignore.

And yet, the showman understood something the professional politicians didn’t.

As we kick off 2018, spare a thought for commodities investors…

And it plots them against the returns for the S&P 500, the Russell 2000 Small-Cap Index, and the tech-heavy Nasdaq 100 Index over the same period. 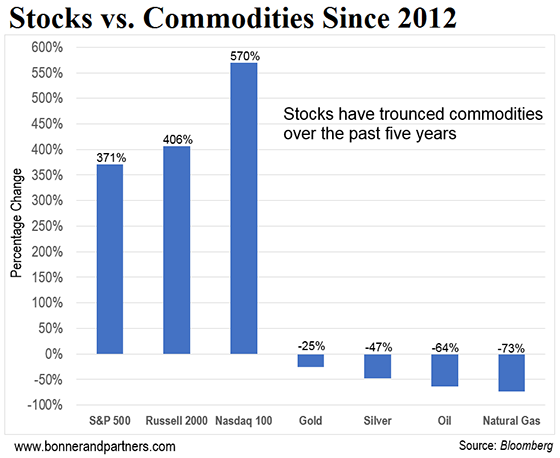 Is This How to Help America’s Forgotten Towns?
One of the greatest political debates of the past few years has been how to help residents of former coal-mining and manufacturing towns. Traditional economists have a new suggestion for the residents of these ghost towns: leave.

California Weed Dispensary: “We Were Bombarded”
Recreational marijuana is now legal in California. Pot dispensaries opened for business on Monday. Here’s what happened.

After millennia, we (as a population, or society) haven’t yet given up food, drugs, or sex (or rock ‘n roll), so why do you think we’ll give up technology?

I agree. My mantra for decades. Tech is not our friend. Nor is Wall Street. It’s our destruction, brought to you by the Democrats. The question now is whether the existential crisis can be abated and reversed or merely slowed before we are consumed in the fire.

I suggest you install awnings above those glass walls. You’re building the equivalent of a car parked in the sun. Nice in the winter, but a bit too hot in spring, summer, and fall.

Recently, legendary speculator Doug Casey invested $50,000 in one small marijuana company. That investment grew to $1 million, and Doug thinks this is just the start of a new boom for the legal marijuana industry.

To learn how Doug spotted this tiny company, and to learn about five more he’s recently identified, reserve your spot at this free online investing summit. More here.