GUALFIN, ARGENTINA – A Diary Dictum: People are neither always bad nor always good, but always subject to influence.

Want to know why tax cuts, spending increases, and EZ money from the Fed don’t work? Wonder how the feds could add $4 trillion in new money, suppress interest rates below zero for an entire decade, add $13 trillion in deficit spending, and still end up with the weakest expansion ever?

What’s the matter with “stimulus,” anyway?

Try this experiment at home. Tell your teenager that he will get $5,000 a month for the rest of his life, and a lifetime supply of marijuana. See how that stimulates him. Think he’ll study harder… work harder…?

We remind readers that we’re down in Argentina studying the evidence firsthand. Despite runaway budgets, out-of-control spending, and lusty, gaucho printing-press money – that is, despite “stimulus” up the kazoo – the Argentine economy is now in a depression, with a 6% annual loss of GDP and an inflation rate estimated as high as 100%.

Our formula recognizes that money isn’t everything. So, it focusses on satisfaction, rather than GDP or raw wealth.

It also recognizes that win-lose deals are negative… They subtract from total satisfaction because they force you to do something you don’t want to do. When a stick-up man confronts you in an alley, for example, he takes your wallet and greatly reduces your satisfaction.

But the biggest win-lose deals are much more subtle. Most people don’t even know they’re being robbed. And yet, these hidden win-lose deals too greatly reduce net satisfaction, which shows up in lower incomes, less growth, and poorer people.

Remember, win-lose is the opposite of a win-win. In a win-win deal, wealth is created as people do things for one another.

They work. They learn. They save. They take chances. They trade with one another. Not because they want to… but because they have to. And little by little, as they succeed at satisfying each other’s wants, progress happens.

In a bakery, for example, the baker gets to work at 4 a.m… kneading his dough in the wee hours, so that the sweet smell of freshly baked bread will draw in the customers at dawn. He would probably prefer to stay abed. But nobody’s going to pay him to sleep in.

Now, suppose something strange happened. Imagine that the Bakers Union hired a particularly powerful lobbyist who persuaded Congress to pass the Bakers’ Income Enhancement Act. This law changed the win-win deal into a win-lose deal, requiring customers to pay the baker whether he baked any bread or not.

Well, guess what. Capitalists… investors… businessmen… and speculators are no different. Like the lucky bakers or the lucky teenager, imagine that they don’t have to work so hard.

Would they work harder? Would they still take long-term risks with their money in order to develop new products and services for consumers?

If the stock market were rising at 10% per year, would they still invest their money in new plants, new equipment, and new lines of business that might earn them – if they work out – 5%?

Is it because they are saints that they do the hard work of capitalism… or because they have to produce some real product or service in order to earn a profit?

In effect, the feds took money from the public – via taxes, artificially low interest rates, debt, and printing-press money – and gave it to the elite.

Or, they could do even better… with buybacks, mergers, bonuses, or special dividends, funded by the Fed’s win-lose fake money.

With the Fed’s fake money available to them, capitalists didn’t put their money and talents to work – in win-win deals – for the benefit of others. Because they didn’t have to. Win-lose financial tricks were much more profitable.

Corporate borrowing hit new records. So did stock buybacks and stock prices. And crazy startups, like Uber, Wag, and WeWork, can hit billion-dollar valuations without ever earning a penny.

But net of inflation and depreciation, real capital investment – the essential ingredient in a capitalist economy – fell to zero.

That’s the story of today’s chart, which maps yearly corporate bond issuance by credit rating going back to 2016.

If a bond is labeled as “investment grade,” it is considered a stable investment because the underlying company is on solid financial ground.

But some of these investment-grade bonds are better than others.

The best investment-grade bonds are rated “AAA”… And the worst are rated “BBB.”

For comparison, junk bonds are considered risky investments because the underlying company is more likely to default on its debt. They are rated “BB+” to “D.” 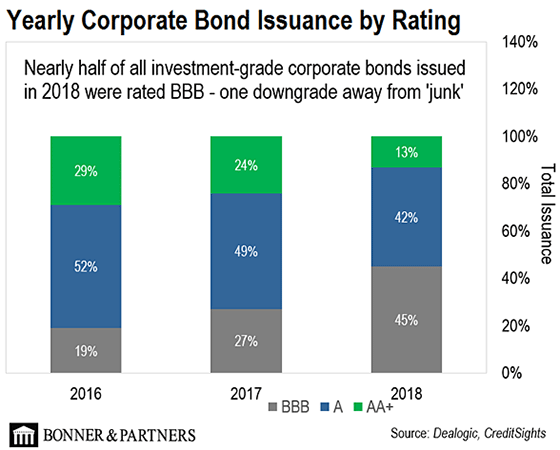 As you can see, 45% of all investment-grade bonds issued in 2018 were BBB-rated… One downgrade away from “junk.”

But when a BBB-rated bond is downgraded, it becomes a junk bond. Junk bonds carry higher borrowing costs… Making it more expensive for these companies to refinance when their bonds mature. That increases the risk of default.

And this is just another sign that the financial system is on precarious ground.

That’s what happened in 2008 – a wave of mortgage-backed securities began defaulting… The credit markets froze… And the stock market tanked.

And here’s the thing: a recent Citigroup study found that nearly 20% of all BBB-rated bonds now carry a negative outlook and are on review for downgrade… A very ominous sign.

Yesterday, we suggested moving out of stocks and into gold… And this is just one more reason to do so.

Facebook’s Discrimination Is Like “Slamming a Door in Someone’s Face”
Instead of getting slapped with a penalty for a privacy breach, Facebook is now being sued for discriminatory ad practices. The Big Tech giant is being accused of discriminating against people based on where they live. And according to the U.S. Department of Housing and Urban Development Secretary, Ben Carson, the company’s ad practices are “just as discriminatory as slamming a door in someone’s face.”

Why Social Media Is Ruining Your Memories
As Dan Denning – Bill’s coauthor on The Bonner-Denning Letter – has said, one overlooked aspect of today’s digital age is that everything gets recorded. And it’s not just the government recordings that you have to worry about. Research shows your own social media “documenting” could permanently ruin your memories. The solution? Walk away. Now.

In today’s mailbag, readers respond to yesterday’s Diary with mixed feelings about the Fed and Trump…

Hi, Bill. I enjoy your restrained opinions and am hoping that you are right. I think that there has to be a new kind of thinking to move on with life as we know it today, not yesterday… Many people think that money has to be earned and has to have value. That has not been the case for many years. True, the Fed may crash the market, as it has done many times, but there is a chance that it may make a fatal mistake doing this and end the Fed forever. Interesting topic. What is the solution? Surely, it is not bankrupting the world… I don’t think that will work much longer.

Bill, you forgot to talk about what kind of mess we would be in if Hillary had been elected president. War with North Korea, high unemployment, causing more crimes on the streets, more useless healthcare, and other stuff too numerous to list here…

Why don’t you support the elected president by advising him to start reversing the national debt clock, by stopping welfare checks to nations around the world that hate us, getting rid of the subsidies to our states and cities, and eliminating many useless departments of government?

The debt is currently 100% of GDP. Is there a reason why it can’t go to 300% and still be functioning like Japan and some other countries currently do? That means the debt can still triple without causing too much of an issue. Just something I wonder about.

The Mueller investigation was not a waste of time or money. Just look at all of the convictions that have occurred over the past 22 months. The Trump campaign was not found to have overtly engaged in collusion with the Russian government. The Donald himself, however, was not exonerated. He still lied about meeting with Russian operatives, as well as did Don Trump, Jr. He is still an incompetent, ignorant jerk, who has been engaged in fraud his whole life and has been nothing but a disaster for our economy and our country.

Just to let you know, President Trump is the best thing that happened to the USA! All you socialist democrats are a disgrace to the USA! If you want socialism, move to a country that lives it and enjoy it. We, as American citizens, love freedom!

Sorry… your anti-Trump message will harm the ability of the country to move forward. The people are increasingly irritated, nervous, depressed over the facts that the republic is being attacked in a way it has never been before – including a depression, two world wars, terrorist attacks from within! Find a way to work with the president.

Did you watch the world premiere of Totally Incorrect: LIVE?

Last night, Doug Casey revealed five bold and politically incorrect predictions about what’s coming for America… and it’s just too controversial to print here. If you don’t like controversy, this may not be for you.

But, if you’re like the over 20,000 people who watched it live, and believe sometimes the hard truths have to be said, you can catch a replay while there’s still time. View it here. 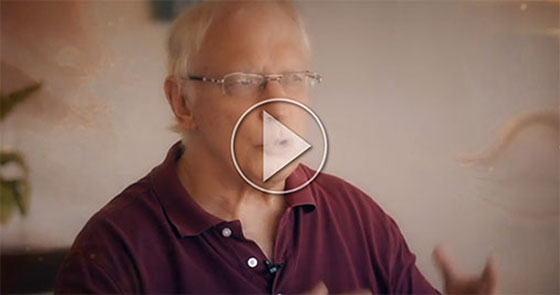