GUALFIN, ARGENTINA – Mike Pence told the crowd at CPAC (Conservative Political Action Conference) that “we will never be a socialist country.”

What was that? A prediction? Or just political BS?

Already, America’s medical system – 17% of the economy – is largely socialized. So is the education system – another 7.3%. And its national pension system… Social Security… is run by the feds and takes up about 5% of GDP.

If you add in all the industries and activities that are required by the feds, or heavily controlled by them… the total comes to about half the GDP. How much of an economy do you have to socialize before you have a socialist country?

We don’t know. And we don’t want to find out. But we suspect the answer has something to do with another bit of political puffery at the “conservative” confab.

Donald J. Trump told CPAC attendees that the “economy is booming like never before.” He was right; never in U.S. history has the economy performed so badly.

Fantasies are always much more appealing than truth… Especially in politics. And you can spin statistics into almost any shape you want.

But let’s take a look. First, here is what most people believe…

That the economy is growing strongly…

Unemployment is at a record low (beyond full employment)…

Federal deficits don’t matter; the government can print all the money it wants…

And the Fed is masterfully twisting knobs and pulling levers to make sure that nothing ever goes wrong.

Except… it is all false.

In the first place, if the economy really were doing so well, why would the Fed “pause” its rate hikes, instead of continuing its “normalization” program?

It knows full well that there are still ups and downs in an economy. As recently as 10 years ago, the stock market got cut in half and the economy was headed for depression.

The cause? Too much debt. And now, debt levels are even higher. The Fed knows the next downturn will need to be fought with lower interest rates. But you can’t cut interest rates if you don’t have any interest rates to cut.

This is getting to be an urgent matter. If it lasts until August, this recovery will be the longest ever recorded. Yes, it could go on forever. But it is a bad bet. The Fed is going to need some rates to cut… and soon.

In the last two downturns, the Fed lopped five percentage points off the federal funds rate, each time. Even that was barely enough; the last recovery – in which we are at the tail end – is the weakest ever.

But now? Over the last decade, average yearly growth rates have cooled to just 1.5%.

Personal consumption rates give us a good idea of what is going on, too. People spend money when their real incomes are rising. In the 1970s, consumption spending rose about 12% per year.

Final sales are the other side of consumption. Those raw numbers are hard to rig. And they show the same thing. They’ve been in a downward trend since the 1970s.

Did the tax cut of late 2017 reverse that trend? Not at all.

From the year before the tax cut took effect, to a year later, final sales rose only 0.1% – that is, one-tenth of 1%… a statistically insignificant move.

National savings, same thing. Only worse. From the 10-12% range in the 1970s, the rate today stands at about 6.5%… again, little changed (and in the wrong direction) from the Obama misfortune.

And note that this was very expensive growth. The Trump Team adds $100 billion per month to the nation’s debt. This produces growth of only $40 billion a month.

On the campaign trail, Donald J. Trump had promised to pay off the national debt in eight years. No one believed him, not even the candidate himself.

By then, the national emergency that followed the crash of 2009 – making sure the elite didn’t lose money on their investments – was over.

The rich were back in high clover. But the Trump Team simply picked up where Obama had left off… and added another $2 trillion to the taxpayers’ ball and chain.

Together, Obama and Trump seem to have made the worst economic deal of all time.

But it produced $300 billion worth of real additional annual GDP. In the 2008-2019 period, real GDP increased by only $3 trillion at a cost of $13 trillion of extra debt.

In effect, they socialized capitalism.

The elite speculate. When there are losses, they are dumped onto the middle classes… as debt.

MARKET INSIGHT: CRYPTOS… DOWN, BUT NOT OUT

Today, something a bit different. We check in on the crypto market.

Remember, after peaking at $818 billion in January 2018, the total market capitalization of all cryptocurrencies has fallen 85%. It now sits at $130 billion.

Cryptocurrency may be down, but it’s not out…

Behind the scenes, more and more users are entering the crypto space.

That’s the story of today’s chart, which tracks the number of blockchain wallet users worldwide from 2015 through the end of 2018. 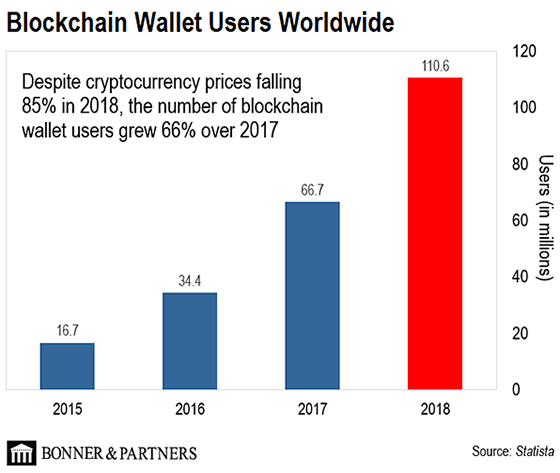 This is a similar pattern to what we saw unfold following the dot-com crash. Internet stocks crashed, but the adoption rate of the technology (the internet) continued to grow. And as we know, the “best of breed” internet stocks from that age like Amazon and eBay went on to climb thousands of percent.

If crypto-assets follow a similar pattern, then the best cryptocurrencies have a bright future ahead.

That’s why Bill and Dan recommend a 1% allocation to cryptocurrencies, as part of their New Permanent Portfolio in The Bill Bonner Letter… despite their inherent skepticism. Subscribers to the letter can find that report here.

P.S. Jeff Brown, Bill’s go-to technology expert, also expects blockchain adoption to pick up. But, not only by everyday investors… Jeff predicts Amazon – one of the biggest of the Big Techs – is on the verge of releasing its own crypto coin: an “Amazon Coin.”

That may sound too incredible to believe. But get the full story right here and decide for yourself.

It’s Getting Crowded in Here
A “crowded trade” means that too much money is chasing the same stocks. And right now, equity managers all seem to be chasing tech stocks. The trade is top-heavy, and the foundation could be getting shaky…

How the Stock Market Got So Old
It used to be that an initial public offering meant a company was young, just starting out. It had its whole life ahead of it, and investors could catch a ride and reap the rewards. Those days are mostly done. Now, when companies go public, they’re massive. Most of the exciting growth is gone. And there’s little reward to be found for investors.

How to Profit from the Gold Bull
A bull market for gold is close at hand. That’s according to Casey Research’s E.B. Tucker. E.B. says gold is about to take off. But if you’re looking to profit, don’t buy physical gold. Do this instead.

Has America lost all of its true conservatives? Dear readers weigh in…

“Disappearance of the American Conservative.” Your idea of “conservative” is exactly what we have now! A conservative wants a recession every six to 10 years! American voters don’t like that! The American voter also doesn’t want socialism, either! Trump unknowingly filled that middle void. Better get used to it!

I skimmed over the articles… and the disappearance of conservatives, in particular, aroused my interest. I’ve been a staunch conservative my entire life. You made somewhat of a false statement with regards to 1942. You see, in 1942, we were on our way to building the largest military in the history of the country. Minding our own business? If we were a second-tier country, I suppose under that condition we could and should, but not as the beacon of freedom. In fact, our foreign policy blunders and loss of credibility began with Harry Truman’s substitute of a draw for victory in Korea and we’ve been paying for it ever since. We certainly paid for it in Vietnam.

Perhaps a small way of improving this would be to change Congress’ job description from a person that legislates, makes laws, and finds revenue to one that manages equality of opportunity and expenses. Of course, in addition to them having to follow the same rules and get the same benefits as the rest of us.

Bill, I don’t always agree with you. But I feel this Diary was one of your best. Balanced budgets and term limits are critical issues and I hope that we can get a moderate and convincing conservative to come forward very soon, to help influence some positive changes. Keep up the good work… Thanks!

There are plenty of conservatives around! The media just owns all the radio and TV news stations so you never hear from them.

Meanwhile, is Bill Bonner a “closet liberal”? The debate rages on…

Thou protest too loudly. Many of your readers are criticizing you for a “liberal” bias against President Trump. I’ve been reading your articles for years and generally agree with you on most issues, since I think the two-party system is destroying our country. But when you make comments like this one: “Yes, he said outrageous and moronic things, too, but there was hope: Perhaps he only appeared to be an idiot to get the idiot vote, which is always decisive in American politics.”

It appears you support the belief that those who voted for President Trump are “idiots.” Would Hillary Clinton have been a better choice…? I most assuredly think not. Smooth political speak got us into this mess, and perhaps, many hope that someone not so skilled in deceiving people might be worth a try.

Someone as smart as you could also point out the more significant fallacies in the bias comments:

The inability of people to acknowledge either, or preferably both, is a demonstration of how high the “idiocy titer” in this country has risen and why Mr. Trump’s strategy of appealing to the idiots was so beneficial for him and detrimental to the country. Hopefully, you might be able to get through to the idiots with some more remedial writing.

Is this what kills the iPhone?

Everybody knows Apple and its revolutionary iPhone.

But what few people know is that the iPhone is under serious threat for the first time ever. That’s according to Jeff Brown, Bill’s go-to technology expert.

To learn about the tech that’s threatening the iPhone, and see how you can stake a claim before that happens, go here. 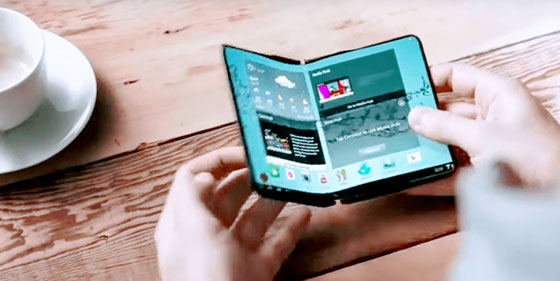