BALTIMORE, MARYLAND – Yesterday, the markets took the day off to say farewell to a former president.

Today, they are back at work. They were set to bounce this morning, following Tuesday’s big sell-off.

But who knows? We will wait to see what they discover as the day goes on.

The Old World is convinced that climate change presents a clear and present danger… of irreparable harm. It is a threat, says the European elite, that must be stopped before we find out whether it really is a threat at all.

The man on the street is not so sure. Recently, he’s taken to setting cars on fire to protest against high gas taxes, causing the French feds to back off – for a while.

Still, in Europe, if you claim to be plucking a goose for the good of the environment rather than for your Christmas dinner, you’ll get a whole lot less squawk.

Here in America, on the other hand, the squawking stops when you claim to be “protecting our military.” What the military needs protection from has never been adequately explained.

Where’s the clear and present danger? No country has a plausible capability of invading the U.S. An invader, if he existed, would be blasted to bits before he even got close.

But the military acts as if an attack is imminent, thus keeping the public in a constant state of alarm and in need of protection.

When people claim to want to protect you, what they usually want is to take your money and boss you around. But we’ll keep an open mind.

Putting aside an actual invasion, there are really only two threats – acts of terrorism and intercontinental missiles. As to the first, we’ll see below what trillions of dollars spent fighting terrorism have wrought.

And in any case, the remedy is simple and cheap: Bring the troops home so the foreigners have no reason to want to do us harm. (When was the last terrorist attack on Switzerland?)

As to the second, we already have the world’s best anti-missile/bomber defense.

A reasonable estimate of what the Pentagon currently spends on actual defense is about a third of its budget. The rest – about half a trillion dollars per year – is wasted on crony projects or spent doing the kinds of things that make foreigners want to blow up the White House.

The tab for the War Against Terror alone – a catch-all for various adventures in various places, including a huge eye-in-the-sky surveillance program – is now probably around $5 trillion. That includes future commitments to weapons deals as well as medical and other benefit programs for veterans.

What did we get for that money? The New York Times figured it out:

Nearly four times as many Sunni Islamic militants are operating around the world today as on Sept. 11, 2001, despite nearly two decades of American-led campaigns to combat Al Qaeda and the Islamic State, a new independent study concludes.

That amounts to as many as 230,000 Salafi jihadist fighters in nearly 70 countries, with the largest numbers in Syria, Afghanistan and Pakistan, according to the study by the Center for Strategic and International Studies, a Washington think tank.

The report’s conclusions, drawing on multiple databases dating to 1980 to compile one of the most extensive studies of its kind, underscore the resiliency of these terrorist groups, and the policy failures by the United States and its allies in responding. The findings also highlight the continuing potency of the groups’ ideology and social-media branding in raising money and attracting new recruits as they pivot from battlefield defeats in strongholds like Iraq and Syria to direct guerrilla-style attacks there and in other hot spots.

Nothing but trouble, in other words. The more we fight terrorists, the more terrorists we get.

And so, we ask: What kind of scam is this?

And first, we turn to President T., whose gut has proven occasionally reliable at scam detection. What does his gut tell us about this one?

Alas, it seems to be twisted up. The Trump team has increased the military budget by about 10% and signed the biggest military pay increase in nine years. This has helped make the soldiers fat and sassy. From Brookings:

And polls show Americans hold the military in the highest esteem of any of the country’s major industries or institutions.

But for all the money and status, are Americans safer? And against what enemy?

Meanwhile, the U.S. is going broke. Deficits doubled in the last two years. Between the anvil of rising entitlements and the hammer of rising Pentagon spending, U.S. finances are being beaten hard.

Why not cut back and save the U.S. from bankruptcy?

In a recent tweet, The Donald seemed to be on the case:

I am certain that, at some time in the future, President Xi and I, together with President Putin of Russia, will start talking about a meaningful halt to what has become a major and uncontrollable Arms Race. The U.S. spent 716 Billion Dollars this year. Crazy!

Yes, he’s right there. It’s crazy to spend so much money and get so little for it.

But here, we permit a very high-confidence prediction: There will be no change to the military budget… or to the Pentagon’s worldwide meddling.

For while the U.S. military hasn’t won a real war since 1945, it has won something more important. Like the environmentalists in Europe, it has won the bamboozle battle for control of the public’s myths.

What’s more, it has become the strong arm of the Deep State, which controls the government… and the press.

Since Dwight D. Eisenhower, no American president has dared to defy the Deep State or its enforcers at the Pentagon.

Take a look at the table below.

It shows the annual returns of the Bloomberg Barclays U.S. Aggregate Bond Index dating back to 1980:

The index covers roughly 8,200 fixed-income securities. And its total value is roughly $15 trillion. It’s basically the bond version of the S&P 500.

What do you notice in this table?

That means anyone under 40 years of age has never seen a bond bear market.

I bring this up because this year, bonds are on pace to have their worst performance since 1976.

Over the past four decades, a down year in bonds has always been followed by an up year. But this time could be different.

Let’s take a long-term look at the U.S. 10-year Treasury rates to get a better big-picture view… 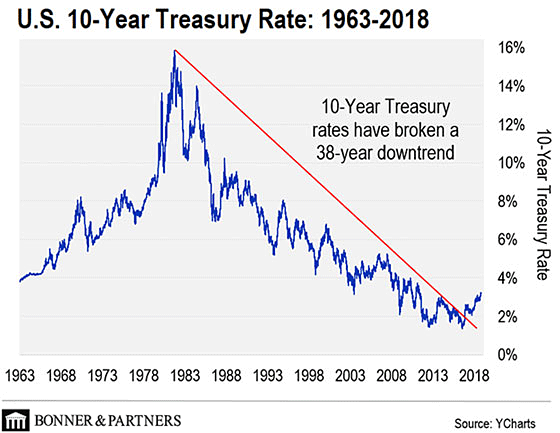 As you can see, rates spent the last 38 years declining – meaning, bond prices were going up. It was a long bond bull market…

But now, the trend has been broken. And the rising rates say the bond bear market is just starting.

The Federal Reserve has hiked interest rates eight times since December 2015. And while Fed chair Jerome Powell recently said the Fed is close to getting rates to neutral, what exactly that means is up for debate. The point is, it’s likely we’ll see more rate hikes in 2019.

The federal funds rate influences interest rates across the economy. As the rate rises, so does the cost of doing business. To compensate for the increased costs, bond investors will want higher yields. And that means lower prices for bonds.

The costs of goods and services are rising. As prices rise over time, purchasing power decreases. To compensate for the loss of purchasing power, bond investors will demand higher yields – which, of course, means lower bond prices.

The recommended debt-to-income ratio is 35% or less. So most of U.S. revenues will go to debt servicing, leaving little for everything else. That’s risky.

Bond investors will demand higher yields to compensate for this risk. That means lower bond prices as well.

How “Laziness” Can Make You Wealthy
You may think your own small business is out of your reach. Think again. Earning and growing substantial wealth can start simply: with a weekend project and a stack of flyers.

Imagining Income Levels by Age Group
At what age do most Americans make the most money? New data shows which age cohort is raking it in… and who is failing to keep up.

How Children Learn About Money
Where do young children learn lessons about money? You may think it’s in school. But the most important lessons are taught by parents… and these lessons last a lifetime.

In the mailbag, discussions on global warming and electric vehicles…

For once, Trump has got it right when he says that he doesn’t believe in global warming. A mathematician here in Perth, Australia was responsible for using the accepted computer models to predict global warming. What puzzled him was that the average temperatures haven’t changed much since the theory of carbon emissions was created. So he went to the original mathematics of the theory – and discovered two important mistakes.

The result was an order of magnitude error in the final prediction. That means that if a rise of between five and 50 degrees centigrade is predicted, the real rise is likely to be one degree. Oops!

In Mr. Macron’s defense re the Paris riots, he never said that he had all the answers about future methods of producing energy and what they would look like. What he is doing is exactly what capitalists like you, Bill, are always saying that politicians should do: He is leaving it up to the free market to determine what those energy needs will be and how best to provide them.

As a poor, working slob who can’t afford to buy an electric vehicle, I am no fan of increasing the taxes on fossil fuels. However, the wisdom of doing so is clear: If you make fossil fuels so expensive that buying them will destroy the budgets of us wage slaves, who make up the vast majority of the population, said workers will demand a cheaper (albeit cleaner) form of energy. Farmers, retailers, and others who supply our needs and who depend upon reasonably cheap transportation to do so, will also agitate for cheaper, cleaner energy.

The answer lies in the introduction of various free energy technologies that have been hidden from us for years. Hopefully, the psychos currently running the “system” (the old Roman word for the main sewer under Rome) will all get arrested next year, the year of mass arrests and military trials. Hopefully!

Meanwhile, after one dear reader compared POTUS’ intelligence to a houseplant, a response…

Please let Julian know that Trump’s IQ of 159 has not been surpassed by a houseplant. I am sorry that your emails have stooped to liberal levels. I stand by my prediction that Trump will be remembered as one of the top 10 presidents of all time.

Did you know that the U.S. is in 55th place when it comes to this essential infrastructure?

That’s right. America has fallen behind countries like Finland and Romania. And Jeff Brown, Bill’s top technology expert, believes this could be one of the little-known motivations for Trump’s trade war. Full story here. 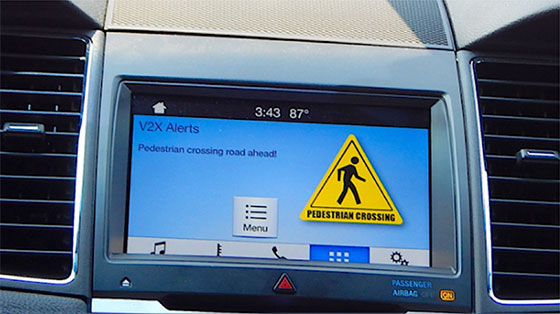