YOUGHAL, IRELAND – “The real question is whether the new dictatorship is one of the right or the left. I think the left is the bigger danger.”

A friend, who prefers to remain anonymous, had asked us to imagine what would happen if there were a disputed result in the next presidential election. Could the American Republic survive?

Here at the Diary, we think the American Republic is already largely a fiction. Congress blabs. The president distracts. The Deep State rules.

But our friend was talking about a more serious breach of decorum – a change not just of substance, but of style.

We will pause here for two non sequiturs.

First, the second-quarter GDP growth number came in at over 4%. This was widely hailed as proof that the economy was taking off under the inspired leadership of Mr. Donald J. Trump.

It reminded us of the early days of the Obama administration… in which GDP growth also topped 4%, thus proving that the economy was taking off. Alas, growth soon fell back to the funky levels we’ve seen for the last 10 years.

Second, we finished framing the barn roof. Our whole crew worked on it on Sunday afternoon. Two of our boys did the nailing. Elizabeth operated the handsaw admirably as a grandchild held down the two-by-fours.

Your editor did the hard work – keeping the project moving forward with tape measure and pencil in hand.

With help from the family, Bill constructs the frame for the new barn roof in Ireland

The old barn should soon have a new roof

Now… back to our conversation.

“You know that woman in the Bronx, Ms. Ocasio-Cortez? She was an activist, like Obama, selected by a liberal group that was looking for a candidate,” continued our friend. “She applied for the job. They chose her because she presents well, I guess.

“She’s a socialist. Who would have thought that self-described socialists would be elected in the U.S.? But it looks like there will be more and more of them.

“The liberals are becoming more radical. It’s as if they learned nothing from the experience of the Soviet Union. They want to do it all over again – here.

“These people are gaining ground. And they’re ruthless. They are so sure they’re right about everything. And they hate Trump and everything he stands for… whatever that is.

“The next presidential election could be close – with two sides that haven’t been so far apart since Lincoln faced Douglas in 1860. Typically, the loser accepts the verdict and life goes on. But in the next election, neither side may be willing to accept a loss. Then what?”

We don’t know “then what?” any better than anyone else. But we would like to take a moment to put it in perspective.

Over time, all democratic republics degrade and degenerate.

Time, scale, and distance separate the people – who are supposed to be the geniuses running the system – from the actual information they need to do it.

The common man can never take the time to understand international capital flows, trade policy particulars, or the real risks to national security. More and more, he relies on his elites – permanent, professional experts who guide and shape government policies (aka the Deep State).

Not having any direct knowledge of the issues leaves the masses dependent on personalities… on public impressions… and on the charisma of showmen.

They are easy prey to fantasies and myths, believing that hobgoblins are out to get them and fairies have pots of gold with their names on them.

It may begin the game operating on principles… laid out in a sacred charter. But it gets carried out on a stretcher at the end, pursued by ambulance-chasing lawyers, lobbyists, and two-bit chislers.

The Republic may be designed by the mind, but it ends up as a foul product of mob emotion.

Americans shouldn’t feel bad about it. They held it together fairly well for more than 200 years.

But corruption gradually works its way from the skin to the bone… and then to the heart. The cronies – the military-industrial-Big-Pharma-Wall-Street complex – find more ways to take advantage of the system… through regulations, trade deals, tax angles, subsidies, contracts, and other finagles.

Zombies, the great masses dependent on succor from the government, use the weight of their numbers to insist on more “benefits” – based on the illusion that someone else, somewhere else, at some time in the future will somehow pay for them.

As time goes by, the costs mount up. Debt grows heavier. Expenses rise faster than income. (In the U.S., debt has increased four times faster than GDP since 2000). The system approaches insolvency.

But by then, the special interests have run their roots deeply into the governmental edifice.

One group insists on its farm subsidies. Another claims that without more money, the Russians will invade. And still another, made up of 100 million retirees, says it needs more pills.

Each claim may be absurd on its own merits, but once the roots are entwined with the stone, they can’t be pulled out without bringing down the whole wall.

Inevitably, a financial crisis arrives. One faction of Deep Staters takes on emergency powers – suspending the few residual protections and rights still enjoyed by the citizens.

Another faction, seeing its supply lines threatened, challenges it. It ends up in a bloody fight.

“We could have a real civil war in the U.S. Just imagine that the vote is close. Congress could be completely deadlocked and dysfunctional… It almost is already. A disputed election could go to the Supreme Court. And then the justices that Trump has put in place could side with the president.

“What would the hardcore leftists do? Most likely, they’d take to the streets. There would be a few demonstrations… some bombings… some assassinations. And then a clampdown.

“Or it could go the other way. Suppose Trump loses, but by a small margin. Then, he claims it is ‘fake news.’ He refuses to leave the White House. The leftists raise Hell. Some people die. Trump calls out the army and declares martial law. Do the generals support him? Or do they back the socialists?”

Again, we don’t know how the Republic ends. We don’t know what end is in store for us, either. But we’re pretty sure there is one.

As Bill reported in these pages last week, Facebook lost $122 billion in market value last Thursday – more than the GDP of 145 of the world’s economies.

As it turns out, this was only the second-largest single-day market cap loss in history.

And that’s the story of our chart today, which maps the five largest single-day market cap losses on record. 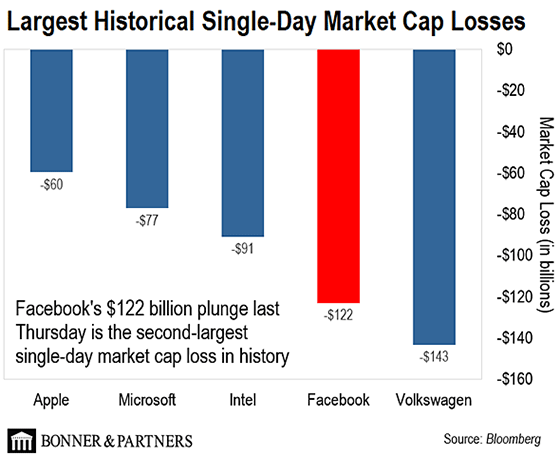 As you can see, Facebook’s $122 billion plunge takes second place behind Volkswagen’s $143 billion market cap loss, which came during the heart of the financial crisis in October 2008.

Rounding out the top five is Apple, which reported its first-ever year-over-year drop in iPhone sales in April 2016. The company saw $60 billion in market value erased shortly after.

What Ends Civilizations
As Bill reported above, the political ideologies of many Americans are shifting further and further left. A majority of millenials – people in their twenties and early thirties – now identifies as socialist. Casey Research analyst Nick Giambruno thinks he knows what’s behind this trend…

The Real Threat From Amazon
Much has been made of e-commerce giant Amazon’s threat to traditional retail business. But retailers aren’t the only ones who should be worried about Amazon. After Amazon’s quarterly earnings report, it’s the advertisers who should be nervous…

Robots Come for the Bankers
In Sweden, a glimpse of what the future of banking might look like. Nordea Bank, one of Sweden’s largest banks, is replacing human workers with automated machines at an alarming rate. And it’s projected that half of its human workforce will be gone in 10 years…

In the mailbag, a dear reader asks WWJD…

People have been asking what Trump and Putin talked about in private. Now we know… Putin was explaining how to set up central planning. Trump decides who wins and who loses on tariffs. Trump decides who gets bailouts and who doesn’t. Trump wants to build walls; he will decide who gets in and who doesn’t. Trump insults our allies and embraces ruthless, brutal dictators. The Trump worshipers love being part of this. And they call Bill a communist, leftist moron because he’s not in favor of the communist way of government.

With all due respect, it seems like you are making a fake argument or asserting a false premise in claiming the entire economy is “fake.” That’s preposterous. That claim is comparable to claiming a kid’s lemonade stand adds nothing to the economy, and therefore, the kid’s business is fake. A paperboy or papergirl delivering papers is fake because you say it is.

You may need an attitude adjustment. I think your warranty has expired.

Do you see it?

It might not look like much, but Jeff Brown, Bill’s top technology analyst, believes the image below holds a clue to the next big move from one of America’s largest companies. Details here. 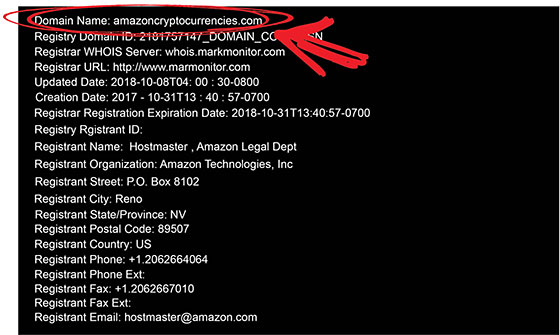