See me, feel me

Touch me, heal me

But first, let’s check the headlines…

Oh my… There’s somebody in the White House casting doubt on the president’s competence.

An anonymous editorial in The New York Times claims there is “resistance” in the White House to an “amoral” president.

That is, there are, apparently, people who are trying to block the president from doing what he wants to do so they can do what they want to do.

From The New York Times:

President Trump is facing a test to his presidency unlike any faced by a modern American leader. […]

The dilemma – which he does not fully grasp – is that many of the senior officials in his own administration are working diligently from within to frustrate parts of his agenda and his worst inclinations.

I would know. I am one of them.

Here at the Diary, we hope The New York Times reveals its source.

If not, we have a suggestion: decimation.

It worked for the Roman army. And military historian Antony Beevor claims the Soviets used it, too, to stiffen the resistance at Stalingrad.

The idea for the Romans was simple: When punishing entire cohorts (military units), they’d line up all the soldiers… and every tenth man would get the sword.

Here’s how the Trump team could use it now: Simply line up the entire White House staff – the head of the National Security Agency… the guards at the front gate… secretaries… top officials… everyone. If no one confesses to having told the truth to The New York Times, shoot every tenth person.

We don’t know if that would solve Mr. Trump’s morale issue, but it would be good for the morale of the rest of the nation.

While the political circus draws crowds in Washington, the important news is left unwatched and unnoticed. And no decimation will cure it.

As we wrote yesterday, America’s long road to bankruptcy will start with a whimper… but end with a bang.

Yes, the whimper will come – as it always does – in response to a debt crisis. Falling stock and bond prices, rising unemployment, debt defaults, foreclosures – the collapse will cause people to moan, whine, and cry for relief.

People should have learned their lessons in the crisis of 2008–2009. But the Fed burned down the school, setting interest rates so low that saving money made no sense.

So instead of saving, people borrowed more… and now, they are more vulnerable than ever.

What will they do when the next crisis comes? When their stocks are cut in half? When their jobs are lost? When the federal deficit hits $2 trillion?

That should mean another round of emergency low interest rates (Mistake #3) and a new program of “shovel-ready,” deficit-boosting boondoggles (aka “fiscal stimulus”), both designed to counterbalance the deflationary economy.

That was always the idea, by the way. Countercyclical policy, it was called. When the business cycle was running hot, the feds would cool it down. Monetary policy would switch to being “tight” – with higher lending rates. Fiscal policy would tighten, too – with less spending and bigger surpluses.

Then, when the business cycle turned down, the feds would be ready; they could cut interest rates and spend some of the surplus they had accumulated.

The trouble with the feds is that they could never get it together enough to store any grain at all. The last time the feds ran a real surplus was during the waning years of the Clinton administration, nearly 20 years ago.

Since then, they’ve drained the granaries dry… and borrowed $21 trillion to pay for the grain they forgot to store up.

So what do they do? They fake it.

They give away fake grain – savings that were never earned or saved… and money that is nothing more than claim tickets on wealth that doesn’t exist. These claim tickets are then added to the federal debt.

And then the feds, too, are more vulnerable. They have to borrow more money just to keep up with the payments on the money they’ve already borrowed.

This puts pressure on the debt market… drives up interest rates… and makes the economy even weaker, thereby lowering tax receipts.

This is just a classic, textbook debt deflation. It happens every time, without exception – interest rates rise and debt becomes too heavy to carry.

And then what? All the poor, the rich, the cronies, and the zombies… with their eyes full of tears and their wallets empty… turn their faces to the feds.

With no interest rates to cut (the federal funds rate, in real terms, is still negative)… and no surplus to draw on (we are in the tenth fat year… and still adding debt at the rate of more than $1 trillion a year)… what can the feds do?

P.S. One last thing before we go. You might remember that, on Tuesday, we said we would spend the next few weeks traveling. The ultimate destination: Bermuda. We’ll be speaking at a conference there. Many of the other Bonner & Partners editors you know, like Jeff Brown and Dan Denning, will also be in attendance.

There’s still time to save yourself a seat if you’d like to join us. It should prove to be a very informative event. Details here.

The amount of goods traded worldwide just shrank for the first time in over two years.

That’s the story of today’s chart, which tracks merchandise trade growth between the world’s 20 largest economies. 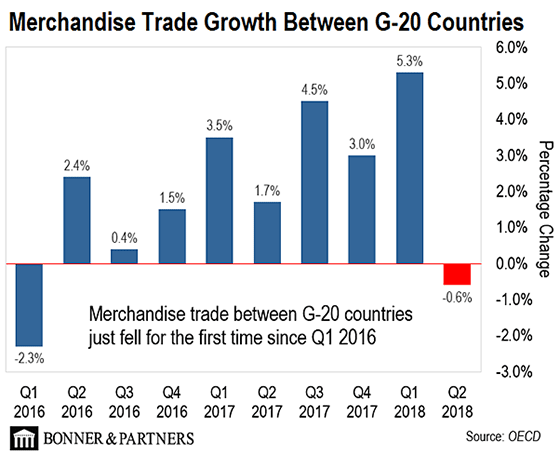 As you can see, last quarter, merchandise trade growth fell for the first time since the beginning of 2016. This drop comes after eight straight quarters of growth.

According to the Organization for Economic Cooperation and Development, the drop can be attributed to a strengthening dollar and the rising tide of protectionism around the world.

How Biannual Earnings Would Shake up Wall Street
Every three months, publicly traded companies report earnings. Wall Street looks forward to these earnings reports like a kid on Christmas. But now, the president is proposing to change earnings reporting to only twice a year. And it could have unintended consequences for the Street…

How the World Invests
Every country, from Canada to Croatia, has investors. But how, why, and for what end these people invest in stocks varies. Here’s a look at just a few of the differences…

Legal Cannabis Is Coming to America
Legal cannabis could be coming to the U.S. in a matter of weeks. But we’re not talking about pot. Instead, one of America’s long-lost cash crops could soon be found at a farm near you.

In the mailbag, Bill’s plan to redistribute the nation’s wealth continues to draw response…

I love this “brave new world,” where people are being paid to be drug dealers, prostitutes, and counterfeiters.

Oh my, Bill, confess! You wrote the whole article on labor-fixing just so you could rank a prostitute’s value with that of a CEO; although, I’m not sure that equating the value and ethics of a reasonably competent prostitute to those of a CEO is fair… to the prostitute.

I totally agree with your argument. It is just unfortunate that in the political environment today, your sarcastic salary scale can only fall on deaf ears. The less-educated, low-wage workers may not be able to understand, and the “more intellectual” politicians will not say a word and will classify it as “fake news.”

Far too many people – some of whom are well educated, and on the other hand, some who are not, to a lesser degree – sell themselves short when it comes to employment. All of them are hapless victims of a very fiscal, financially corrupt, free enterprise system, which is both moderated and manipulated by covert, bureaucratic, political design. How can we fix it? Boycotting, wherever applicable, would be a huge step in the right direction!

I would, however, like to cap all wages of professional sports figures and circus performers to our current hourly minimum wage – then, perhaps, we would get greater performance outcomes and player satisfaction.

How about writing about the absurdity of sports figures in this country? Not only their inflated salaries, but their belief that they become political and economic spokespersons based on their notoriety. What great role models for young kids today. Growing up, we looked at batting averages and the like; today, however, we judge and compare salaries to a player’s worth.

Meanwhile, one of Bill’s “neighbors” in France writes in…

I have been reading Bill Bonner’s Diary for more than a year now. This last writing interested me in quite another way, not financially. I am an American living in France since 1983 (actually, I have dual nationality). I am a medical doctor, having done my medical studies in the U.S., but having worked most of my life in France as a family practitioner (my wife is French). My patients live in an area upstream of Montmorillon. In France, we still do house calls, and I have some patients living near the Gartempe River at Saint-Bonnet-de-Bellac.

Another interesting coincidence is the story of Madame de Montespan. Her family comes from two villages – one near where I practice, Mortemart, and the other farther to the south, Rochechouart. I thought these little anecdotes were interesting. I enjoy reading Bill’s Diary and his insights on the world and finances. On an international scale, I thought it to be quite a coincidence that I am almost a neighbor to Bill in Poitou!

The smartphone killer is 1,000x faster and has the power to download a two-and-a-half-hour movie in a few seconds. 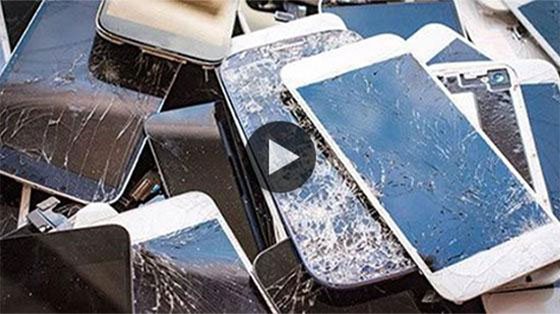