CHERBOURG, FRANCE – We’re on the ferry that will take us to Ireland. It is foggy outside. We can see nothing.

This is just the beginning of a long trip that will take us to South America (where we get to see a financial crisis underway in Argentina)… Germany (where we hope to find out more about how Germans are preparing to tighten up at the European Central Bank)… and Bermuda, where we are scheduled to give a speech to a group of dear readers at the Legacy Investment Summit. (If you’d like to be one of those dear readers, go here.)

Last week, we wrote about the Whimper and the Bang. The Whimper – a credit deflation… with falling stock prices and a recession – is inevitable. Every credit-fueled boom eventually runs out of gas… and then turns into a bust.

As for Making America Great Again… you can forget about it until this debt bubble issue is resolved.

And you’re not going to do that by increasing the military budget, cutting taxes (unless you’re willing to cut spending, too), or getting into pointless trade wars with everyone from Canada to China.

All of the blather about “more than full employment”… 4% growth… and the tax cut “paying for itself”… is just a distraction. Look at the numbers more carefully – they are almost all misleading or irrelevant.

So are the endless feuds and fantasies coming out of Washington. Soon, it won’t matter who ratted out the president in The New York Times.

It won’t matter, either, whether the Russians tried to influence the 2016 presidential election. (Who didn’t?) Or, whether or not POTUS really is a moron.

These things won’t matter because people will have other things to worry about.

Goldman Sachs’ bear market indicator, for example, is at a 50-year high… Most likely, we won’t see asset prices this high again – in real terms – in our lifetimes.

In a Whimper, prices go down… money disappears… and the economy goes into depression. What happens after that is less sure. But our guess is that the Whimper will be followed by a Bang.

Yesterday, we got a hint of the noise to come when MarketWatch reported the comments of former International Monetary Fund head economist, Olivier Blanchard:

In his speech at the Fed conference, Blanchard said the size of the balance sheet is not a constraint… The best policy would be for the Fed to buy assets with high premiums like stocks, he said.

“This could do the trick and could work even better than buying long bonds,” he said.

If things got really bad, monetary financing of the deficit is something that could work to increase demand, Blanchard said.

“We have this notion that it is only OK for the central bank to buy assets and not goods. But that’s a restriction we imposed on ourselves,” he said.

Yes, the Fed could be buying dog food and condoms, too!

It is very unlikely that the Fed will “pull a Volcker” – continue its tightening cycle – in the face of falling stock prices and a recession.

Not with this kind of high-profile advice coming its way… Not with Jerome Powell at its head and Donald Trump in the White House.

And not with $69 trillion worth of debt hanging over the U.S. economy.

About $39 trillion of that debt is “excess” (above and beyond the traditional 1.5-to-1 relationship of debt to output).

It wouldn’t exist with honest money or honest interest rates. And it will go away – along with the asset prices, businesses, and lifestyles it supports – when the credit bubble pops.

In the ensuing panic, the Fed’s “tightening” program (which is actually trailing inflation, not leading it) won’t last a single day.

But the Fed can’t cut rates if it has no rates to cut… The federal funds rate – the rate at which banks lend to each other – has been negative, in real terms, for 10 years. Making it more negative is not going to make much difference.

Which is why Olivier Blanchard is already speculating about all the other things the Fed might do.

It’s also why – in the next crisis – the lonely, desperate eyes will turn from the Eccles Building (home of the Federal Reserve) to the Capitol Building (home of Congress)… and beseech the peoples’ representatives for succor.

A better government – say, one ruled by Calvin Coolidge and his Treasury secretary, Andrew Mellon – might put wax in its ears.

In the years following the Depression of 1921, for example, Coolidge ignored pleas for more government spending to help lift the economy out of its funk.

Instead, the Coolidge team cut the budget… and the bad debt, bad decisions, and bad businesses were purged from the system.

Within 24 months, the economy was humming again. Then, in 1930 – after the crash of 1929, but before the Great Depression had set in – Mellon (then working for Herbert Hoover) offered this policy advice:

Liquidate labor, liquidate stocks, liquidate the farmers, liquidate real estate. It will purge the rottenness out of the system. High costs of living and high living will come down. People will work harder, live a more moral life. Values will be adjusted, and enterprising people will pick up from less competent people.

But now, the feds are all ears. They are the ones who got most of that $39 trillion in excess credit.

And now, they, their cronies, and their campaign contributors are the “rottenness” that would be purged from the system.

They were the major beneficiaries of the boom; they will be its major victims.

So there is no way they are going to allow a real correction. Instead, the elite, the rich, the feds themselves, the world improvers, the meddlers, the bad businessmen, the bad investors, the bankers and the finaglers, the over-spenders and the chislers, the zombies and the cronies… they’ll all rage against the dying of the credit light.

And succor will be given unto them. Trillions of dollars’ worth of new spending, new projects… boondoggles… claptrap initiatives (such as the Cash for Clunkers scam of the Obama era)… tax credits… abatements… subsidies… and giveaways.

And trillions in new buying from the Fed, too… not just for bonds, but for stocks, houses, and gin.

Social media stocks are in free-fall…

That’s the story of today’s chart, which maps the Global X Social Media ETF (SOCL) – which tracks a basket of the world’s largest social media stocks, including companies like Facebook, Twitter, and Google – from January through today. 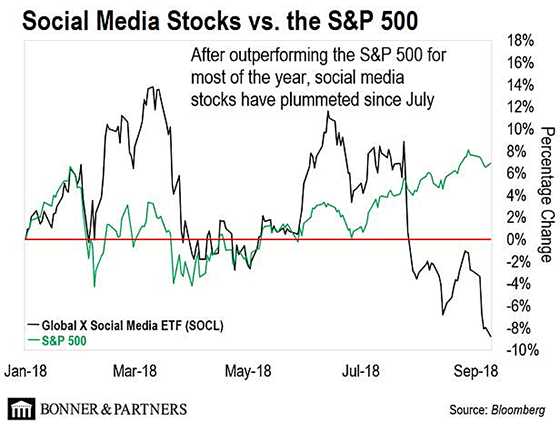 As you can see, social media stocks outperformed the S&P 500 for most of the year… until July. That’s when Facebook, Twitter, and Google testified before Congress about their content-filtering practices… and the market quickly turned on social media stocks.

And with this month’s Justice Department probe into whether social media companies are “intentionally stifling the free exchange of ideas,” it will be difficult for social media stocks to make up ground before the year is out.

As an investor, this should be on your radar. As we showed you back in July, Big Tech companies like Facebook and Google have accounted for the majority of year-to-date gains for the S&P 500.

Increased government scrutiny of these technology firms will likely put downward pressure on their share prices… which could have an outsized effect on the broader stock market.

Tesla: “No Longer Investable”
As Bill has written in the past, Silicon Valley carmaker Tesla is a peculiar product of the modern stock bull market. While the company continued to lose money, the share price continued to climb. But the reality may finally be setting in for Tesla. One high-profile fund now declares the company “no longer investable.”

How Trump Legalizes American Cannabis
In the next few weeks, a particular strain of cannabis could be legal in the United States. But we’re not talking about pot. Casey Research’s Nick Giambruno shows how one of America’s favorite cash crops steps out of the shadows.

Why Millennials Are Sitting Out This Bull Market
By some measures, we’re living through the longest stock bull market in history. But most of America’s young people, the so-called “millennials,” are sitting it out. One possible reason: coming of age during the Great Recession.

In the mailbag, more talk of the “White House traitor.” Is the unnamed person a rat-like creature or a patriot?

A true patriot is what this person should be considered as. Traitors are those who just go along knowing that their “leader” is wrong, and who are too cowardly or too stupid to step up and speak. Congress is full of these cowardly types, mostly Republicans – go figure.

Surely you jest. Shooting people to “out” the secret source of an op-ed? The mere fact that the anonymous op-ed has people scurrying about the White House trying to find the “little rat-like critter” is laughable at best, and seriously sad at worst.

In reality, it is an amazingly insignificant story that most previous presidents who possessed any substance did their best to ignore as a fact of celebrity. People in glass houses… But Mr. Trump rises, or perhaps more appropriately, lowers himself to this challenge as if his “honor” and the office of the presidency has been offended. What you are is what you get, Mr. President! You deserve all of it.

We have an organization similar to the agricultural hobbyists you wrote about right here in the U.S.! I’ve been a member of the Early Day Gasoline Engine and Tractor Association for over 30 years. In some parts of the U.S., local “branches” of this national club still hold such harvesting and threshing exhibits annually. It’s a lot of fun to be involved in such history.

As people moved from agrarian to industrial economies, they moved from physical to mental labor. As computers and robots take over those positions, to where can people move?

In 2008, mega-banks misused billions in taxpayer funds. After a review of the banking industry, President Trump signed Bill S.2155 into law. 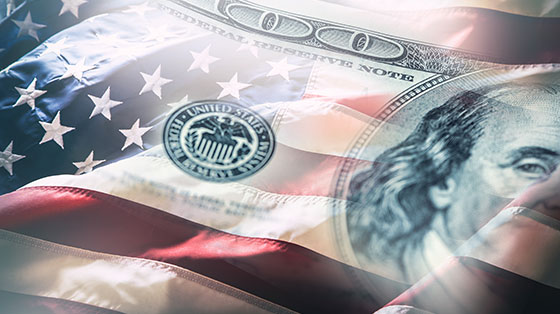