BALTIMORE, MARYLAND – The historic powwow at the G20 in Buenos Aires last weekend could turn out to produce some positive results.

At least the Chinese and the Americans are thrashing around. Maybe they’ll knock down a trade barrier or two by accident.

But the good news this week is that nothing much happened on the banks of the Río de la Plata… neither to make things worse… nor to make them better.

And that is almost a miracle. Because, looking at the American faces in the photo op at dinner, we see nothing but trouble – kooks, frauds, and egomaniacs with short attention spans. Bolton, Navarro, Mnuchin – that they managed to get up from the table without knocking over some water glasses is a gift from the gods.

Or from Donald J. Trump. Yes, we can thank our president. He is cunning enough to know that a fake trade war may be good politics… but a real one would be a disaster.

Had an escalation, rather than a truce, been announced on Sunday morning… the Dow would have opened 1,000 points down on Monday, rather than more than 100 points up.

But now, the trade war has been set aside… like an unexploded bomb in a children’s playground. So we turn to other grenades.

Nobody took the protests very seriously at the beginning. People began putting on their yellow, fluorescent vests (obligatory equipment for truck drivers) and showing up in Paris.

They were upset because the government is set to impose an additional tax on fuel beginning January 1, 2019.

The French like to manifester from time to time. This was nothing new.

Besides, the demonstrators were from the middle classes… from outside the capital… with no political power or media cachet – easy to manipulate and easy to forget.

They were like the people of Flyover America, who see their cost of living going up and their quality of life going down… who aren’t fully on board with the liberal elites’ programs for the future, but who tend to go along anyway as if it were their civic duty to let themselves be ripped off.

The proposed new tax increase was hardly revolutionary. Though it would have taken the price of gasoline to $6.50 a gallon, it reflected a broad consensus of France’s right-thinking rulers – a visionary program set in motion by Macron’s predecessor, François Hollande, designed to make France a world leader in green-ness.

That is, France’s best and brightest were committed to making the country a paragon of environmental correctness – no matter what the cost. And the current president showed no inclination to back down.

“The demonstrations by the yellow vests,” writes our son Henry, who comments from Paris on politics and economics for our dear French readers, “culminated [last week] with the response of Mr. Macron… Here is, grosso modo, his message to the protestors: “We’re not going to change anything. The taxes on fuel will stay in place, and they will be raised in 2019. Taxes on polluting vehicles will go up, too.” Go jump into the Seine, in other words.

This was not the message the “yellow vests” wanted to hear. And it was a departure from the script.

Typically, a president will go limp and mealy-mouthed (as Mr. Trump cleverly did with the Chinese), claim to feel the demonstrators’ pain, and promise further talks and compromises.

“My responsibility is simple,” said the president of the Fifth Republic. “To guarantee our citizens access to energy that is cheap and clean.”

“What kind of comedy is this?” asks Henry.

“How can Mr. Macron guarantee anything… much less energy that is cheap and clean? Is he an engineer? Does he know something about electricity generation or nuclear power? How does he know what direction to go… whom to push… with whom to speak… or what inventions to focus on?”

“We must leave fossil fuel,” continued the Oracle of Paris. “In 30 years, we must go from a France where 75% of our energy is fossil-based to 2050 [he seemed to give himself a year of wiggle-room], when the production and consumption of energy will be completely de-carbonized.”

“Huh?” asks Henry, or words to that effect. “Is there some panel of experts that knows what technology will replace our current sources of energy and at what price? Who are these omniscient geniuses?”

The demonstrations have caused three deaths so far. Dozens of cars have been burned… thousands of police and demonstrators have been in motion. Parisians say they have not seen anything like it since the student uprising of 50 years ago.

Perhaps Mr. Macron got hit in the head with a rock. His visions continued:

“We want to construct new forms of transportation… By 2030, the number of windmills will triple… photovoltaic panels will quintuple… and we’ll put the windmills out on the sea…”

Do these things make sense? Not likely. How would a windy politician know where to find the best source of energy?

But if you want to understand what is going on in France, just imagine that Hillary Clinton had been elected instead of Mr. Trump.

And she might very well have resisted efforts by the “deplorables” to interfere with her grand vision. Then, there could be tear gas on Pennsylvania Avenue instead of the Champs-Élysées.

But the real story, Henry explains, is much the same in France as in the U.S.: Governments are running out of money.

In Europe, “the environment” is just a sacred pretext. Like “national security” in the U.S., the elite use it to get more cash and control for themselves.

But wait… Is the Earth really heating up? Should carbon emissions be limited?

What should he believe? Stay tuned…

The portion of U.S. equities held by index funds has ballooned in recent years…

Index funds are passively managed mutual funds designed to track a specific market index, such as the S&P 500.

With index funds, the fund manager does not actively pick stocks. He simply invests in the components of the benchmark index.

To illustrate the rise of index funds, today’s chart tracks the percentage of U.S. equities held by index funds from 1986 through today. 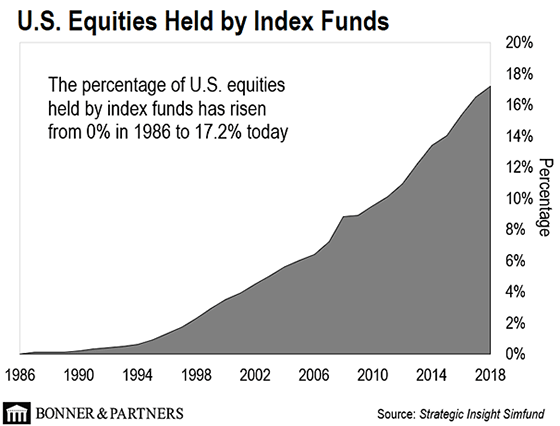 Index funds have grown so quickly because they have largely out-performed actively managed mutual funds over the past 15 years.

But the massive shift toward passive, index-tracking funds could pose a problem for investors down the road.

Here’s how Dan Denning, coauthor of The Bill Bonner Letter, put it in a recent issue:

But that’s not really a stock market anymore, is it? If active management disappears – if actively thinking about what a security is actually worth disappears – no one is doing the work of figuring out what prices should be. That’s dangerous for the stock market.

Because passive, index-linked investments ignore valuations entirely, it increases the odds of an accident. And then, the “weight of money” argument, where liquidity drives prices relentlessly higher regardless of value, starts to work in reverse. The feedback loop works in the opposite direction. Buying no longer begets buying. Selling begets selling.

This is the dangerous point… It’s not that these funds cause the crash. It’s that when the next crash happens – as it has to when valuations are so historically skewed – these funds are bound to make it worse.

Coming to a Central Bank Near You: Stock Buying
As Bill has written, in the next crisis, the Federal Reserve will get desperate. What will it do to “stabilize” the stock market? Start buying…

The Hits Keep Coming for Bitcoin
Bitcoin, the world’s first cryptocurrency, is down… way down. The popular coin dropped below $4,000 to kick off December. And it could be headed lower.

The Assassination of Bitcoin
Last month, Bill speculated that central banks could be gearing up to issue their own crypto-coin. Dan Denning, Bill’s right-hand man on The Bill Bonner Letter, thinks it’s all but assured. Only one thing stands in the way of the central banks: bitcoin.

After Bill concluded that the trade war was fake, too, a dear reader points out something else from the G20 summit that’s phony…

Bill, I enjoy your insights. To your “fakes,” I would add “fake smile” and “fake agreement” on the part of the Chinese. I have worked in Singapore and China, and my Chinese friends tell me that a big smile and a verbal agreement don’t mean much, that they will go away and do what they want to anyway. Buyer beware! Merry Christmas.

Meanwhile, after Saturday’s guest essay, a strategy to preserve and protect your wealth…

Dear Sirs, I find some fault with Mark Ford’s strategy for wealth building (just reach for income). This type of income gets clobbered with ordinary tax rates. Lately, this has exceeded 40%. Income in the capital gains category makes much more sense in the lower tax rates. One way to get capital gains is to buy real estate and improve the property and the NOI (net operating income).

The result should be an increase in value and potential for capital gains, which are taxed at a much lower rate or could be worked into a tax-deferred exchange, where taxes are delayed indefinitely. An astute investor could delay taxes ad infinitum by exchanging and then, in estate planning, leave the final asset to whomever and get a marked to the market valuation for the benefactor. Working such a plan would create far more value that just getting ordinary income.

You’re running out of time to see this message from Bill.

On Wednesday, our editor sat down with two other legends from the financial publishing world: Doug Casey and Mark Ford. The three men had a frank discussion about life… money… and the markets. Catch it all here. 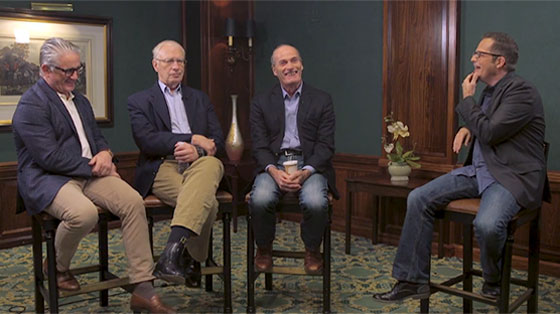