“Huh?” wondered Washington and the media. “How are we going to pay for government? The deficit is already out of control.”

“The Donald works in mysterious ways,” replied his fans.

But it’s not so mysterious to us or our dear readers, is it? No one has more to lose from a correction than Donald J. Trump.

He’s claimed credit for the bubble on Wall Street… and staked his credibility (to the extent that he has any) on the expansion on Main Street (such as it is).

Not only that, but his personal fortune in real estate was built on artificially low interest rates, which boosted New York metropolitan area property values. Higher interest rates could cost him billions.

So how can he keep the boom going? Pump in more money! That’s why he is attacking the Fed’s “normalization” policy… And it’s why he’s preparing the nation for another tax cut.

Stay tuned… This is going to be exciting.

Meanwhile, one of the big subjects at last week’s inaugural Legacy Investment Summit in Bermuda was the effect of new technology on the future.

They believe technology is going to unleash some gee-whizzy things in the years ahead… and that the world even 10 years from now will bear little resemblance to the world today.

It will be a “glorious time,” said Beck, with more changes and innovations in the next 10 years than in the entire history of mankind up to this point.

This progress, they say, will come from artificial general intelligence (AGI) – a term we had not heard before.

AGI refers to the ability of a machine to do anything a human can do… and more. Apparently, it will be able to do things we didn’t even know needed doing. And maybe some things we don’t want done, too.

So we’ll take the other side of the trade.

Information technology hasn’t brought about a glorious future so far; it has just created more noisy distractions. And today, we’ll explain why two of the noisiest – Facebook and Google – are likely to grow quiet in the years ahead.

But before we get to that, let’s pass along some “takeaways” from Bermuda…

Cryptocurrencies – Two analysts, Teeka Tiwari and Marco Wutzer – editors of Palm Beach Confidential and Disruptive Profits, respectively – were very positive and upbeat… They’re sure that cryptos are going to the moon.

The big Wall Street firms have realized that there’s a demand for crypto products. When they start buying cryptocurrencies to feed their new crypto products to sell to clients, cryptos will go mainstream… and they’ll go up.

Our view: Maybe. Maybe not.

Gold – This was, after all, a “hard-money” conference. So several analysts were bullish on gold.

One argument in its favor: Consumer prices will rise as the trade war begins to bite. Investors will flock to gold to protect their purchasing power.

Another: Political crises… sanctions against Iranian oil… election results – there are any number of pins that might prick this stock market bubble. Investors will want gold to protect themselves.

And another: Gold has been in a bear market since July 2011; it’s time for a trend change.

To which we will add one of our own: The world’s debt is unpayable. It must be either inflated away… or deflated away.

Donald J. Trump, the “King of Debt,” is an inflation guy. He’ll do everything he can to make sure the coming debt crisis is resolved with inflation, not deflation.

Our view: Gold is now fairly priced. The coming crisis (whatever form it takes) will probably mean a higher gold price. But we do not recommend gold as a way to make money; we only recommend it as a way not to lose money.

Pot Stocks – Nick Giambruno, editor of Crisis Investing, made a good case for the expansion of the marijuana trade in the U.S.

Once politicians see how much money can be made by making cannabis legal, they will get behind it. Even the Trump administration is said to be eyeing weed and preparing to remove the federal prohibition.

Sales will go up, and so should the major suppliers’ stock prices.

Our view: Nick is probably right. But weed stocks have entered dangerous territory.

Vancouver is the leading market-maker. But whenever something gets red-hot in Vancouver, it’s time to get out.

Former mining exploration companies are now switching to weed – just as they added “dot-com” to their names in the late ’90s and “blockchain” or “crypto” in 2017.

Most pot stocks will disappear. A few will probably make good money.

Commodities – Billionaire resource investor Rick Rule gave a coherent and persuasive argument in favor of commodities, as he always does. They’ve been despised for many years. So apart from the shale oil scam, little money has gone into new exploration.

The commodity cycle is a long cycle, Rick explained. It takes many years for a new mine to begin supplying the market.

Our view: Rick is right. Commodity producers seem cheap. This is probably a good time to buy. But be prepared to wait.

Stocks – No consensus emerged from among the analysts at the Summit.

Jason Bodner, editor of Palm Beach Trader, pointed to the economic data as justification for higher stock prices ahead. And Jeff Brown, our own chief technology analyst, believes the bull market in stocks still has a ways to run. There were no raging bulls.

But the bears were also in attendance. Dan Denning, our coauthor on The Bill Bonner Letter, shook the crowd when he told them they ought to expect stocks to be halved before the next bear market is over.

Our view: You make money by buying low and selling high. Stocks are high; this is not the moment to buy.

In addition, stocks are high for the wrong reasons – because they’ve been pumped up by fake money and unpayable debt. The money could disappear in a trice. The debt could vanish. Stocks could crash and not recover in our lifetimes. Stand clear.

But let us now turn to two of the biggest – and perhaps most overpriced – of all stocks: Facebook and Google. These are the companies, among others, that were supposed to make their shareholders… and the rest of us… rich.

Did they enrich the whole of society, like the giants of the Industrial Age? Did they bring growth and prosperity, like Ford Motor Company or Standard Oil?

Nope. Not even close.

Growth rates began going down after the ’60s. Hourly wage growth flattened in the ’70s. Google began in 1998. Facebook took off in 2004. Since then, what have these tech giants wrought?

Apparently, very little… Growth rates continued to sink over the past 20 years and are now only half of what they were in the ’60s. Real wages are scarcely more than they were when the new century began.

What the tech companies have given us are distractions that steal our most valuable resource – time. The average person now spends 11 hours per day on electronic media, leaving him less time to work…

Bank stocks are plummeting in 2018…

That’s the story of today’s chart, which maps the year-to-date performance of the SPDR S&P Bank ETF (KBE) – which tracks a basket of 85 U.S.-based bank stocks – against the S&P 500. 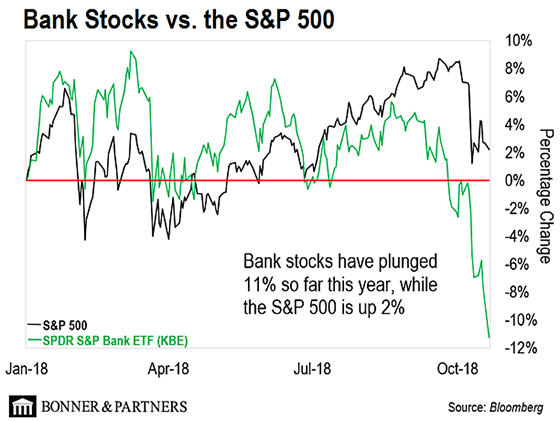 Bank stocks typically perform well when interest rates are rising. That’s because they can earn more from the spread between the interest they pay on savings accounts and certificates of deposit (CDs) and the interest they receive from their loan books and Treasury bond portfolios.

But bank stocks have fallen this year, as investors worry that rising rates will slow down loan growth.

As Bill has written in the past, rates tend to move in long cycles. The current uptrend for interest rates could, therefore, last years… perhaps decades. If the above dynamic holds – and if consumers cannot afford loans at higher rates – it will mean more pain ahead for banks.

To Survive the Retail Apocalypse, Sell More Chickens…
Much has been made of the “retail apocalypse.” Traditional retailers like Sears and JCPenney have lost market share to e-commerce giants like Amazon. But some companies are thriving in the age of retail apocalypse. Their secret? Sell more chickens.

How Millennials Invest
Millennials – people in their mid-twenties to early thirties – are coming into their own. A new study concludes that 20% of all millionaires fall into this demographic cohort. And these young Americans are investing very differently than their predecessors. Here’s how…

I love and support the Digital Bill of Rights. Just one suggestion: Release it in a format that will print on 8.5-by-11 inch paper without post-processing.

I hope that the Boise, Idaho area turns out to be a great bolthole location. We love it here. But it is being discovered by too many people who, I fear, want to change it to be like every other socialist hole in this country.

Too many people in one place turns a society to socialism, without constant pushback. We are being overtaken because we did not expect that adding population would ruin the society. I am starting to think that cities should be limited to 250,000 people, with a mandatory separation of 100 miles between them.

Dan, I’ve read the Digital Bill of Rights and I’d be happy to sign it on the record. I’ve been reading Bill since the ’90s, and I share your concerns. I wrote a book about this myself called, Freedom or Forfeit: The Fate of America. I’d be happy to send you a free PDF version. And I’d like to meet you when you get to Denver. I want to help raise awareness. Please contact me if this is something you’d be interested in pursuing.

One thing you have to give Donald Trump credit for is that he is not a born politician. He doesn’t come out with the lies politicians habitually tell – other than those which make himself look good. Those are the ones everyone tells. He has his own businessman lies, of a certainty: “My deals are the best you can find,” or, “The other guy is a crook, and will cheat you blind.”

When he has a thought about an issue, he often just says what he thinks. His followers, like people who find a store they like for some reason, don’t want to hear anything negative about him. If he ever disappoints them, of course, even slightly, his followers might just turn against him en masse – like customers have turned against greedy department stores in favor of online merchants for better bargains.

But if not Trump, or those who support him, what is the choice? One lying political party or the other. The only choice is to cast no vote for the incumbent liars or their lying opponents. Maybe choose an independent or someone from a minor party. Just be careful with that. One could start the process this November. I intend to.

That’s because a new technology is currently in development. It promises to permanently cure thousands of diseases, and help people live well past one hundred years.

When that happens, the entire pharmaceutical industry will be turned on its head. But smart investors who position themselves before that happens stand to make a fortune.