Editor’s Note: Stocks are on shaky ground. The S&P 500 fell nearly 3% on Monday before recovering some ground. The volatile moves have investors on edge. So today, we’re turning to Teeka Tiwari.

Teeka was on the front lines of Wall Street during the dot-com crash and the 2008 financial crisis. So he knows how important preserving capital is. Today, he shares three alternative asset classes that can shield your wealth from falling stocks. Read on…

I’ve been in the investing game for three decades now. And I’ve spent most of it on Wall Street.

So this isn’t my first rodeo.

And that’s why President Trump’s decision to ramp up heat on China over trade doesn’t bother me.

Last week, President Trump threatened to impose 10% tariffs on $300 billion worth of Chinese imports in retaliation for what he called “unfair trade practices.”

And on Monday, his administration labeled China a “currency manipulator.” The Dow fell over 750 points on the news – its worst day of the year.

Now, I’m on record as saying President Trump is absolutely correct to say, “No more!” He’s simply trying to even the playing field.

But as I’ve been telling my readers: None of this matters. I still believe the U.S. and China will work out a trade deal at some point. And stocks will continue their long-term uptrend.

However, I also believe the trade war could result in a temporary economic slowdown this year. That’s why I’ve been looking for hedged and alternative assets that provide income to defend against volatility in the stock market.

Now, gold is one hedge that can provide you with this “sleep-at-night” protection. But today, I wanted to share three other alternative assets that you can also flock to while the trade war plays out…

I’ve always said everyone needs to add some crypto exposure to their portfolios.

You see, cryptos are uncorrelated to the markets. In other words, their movements aren’t tied to the stock market or overall business cycle.

Correlated assets move together in price direction. Large-cap companies usually move in the same direction as each other, for instance.

And assets with inverse correlations move in opposite price directions. For example, when the U.S. dollar goes down, gold prices usually go up.

But uncorrelated assets are unaffected by these forces.

Wall Street is starting to realize that the price of bitcoin is unrelated to the prices of gold, stocks, bonds, or commodities.

A study last year by Bitwise Asset Management concluded that allocating just 1-10% of your portfolio to bitcoin gives better risk-adjusted returns than holding only stocks and bonds.

This is Wall Street’s “Holy Grail” – an uncorrelated asset performing well under diverse market conditions… and maintaining its ability to rise at the same time.

And we’re seeing that today…

Earlier this week, the S&P 500 was down by as much as 4.5% on the month, with more volatility ahead…

Like cryptos, collectibles are uncorrelated assets. They’re also hard assets that maintain their values. And that’s why millionaires and celebrities have been enjoying and profiting from them for years.

Even last year – when almost all asset classes lost money – the HAGI Top Index for rare classic cars was up 2.5%.

Classic cars have risen in value for the last 30 years. And during the 2008 financial crisis, the smart money flowed into this safe-haven asset.

With all the volatility in the stock market, it’s important to diversify your assets. And investing in these collectibles – like cars, art, and even baseball cards – is a great way to do so. It’s how some of the richest people on the planet have grown their wealth…

According to McKinsey & Company, private markets have over $5 trillion in assets under management. And for years, Wall Street and venture capitalists (VCs) have walled off this ocean of capital from ordinary investors.

And it’s no wonder why…

As you can see in the chart below, the average VC fund has crushed the returns of public markets over the long term using this strategy… 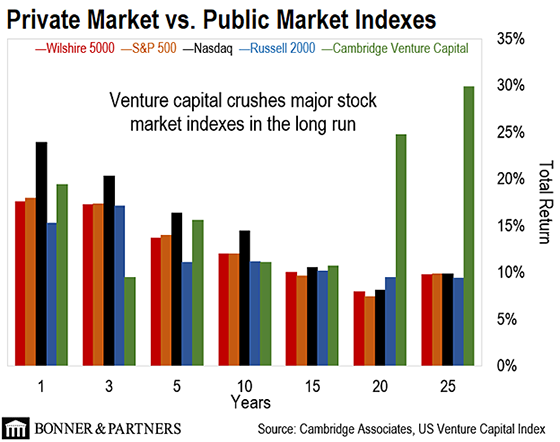 For decades, 99% of Americans have been locked out of this exclusive market. You needed a net worth of at least $1 million or had to be connected to insiders.

But thanks to some recent regulatory changes, you can now invest in private companies before they become public.

These new opportunities are called Regulation A+ offerings. And they’re open to the general public – not just accredited investors. In some cases, you can buy into these private deals with minimums of $500 or $1,000.

These sweetheart deals being available to the general public now is a real game changer.

Main Street can finally take advantage of the deals Wall Street fat cats and West Coast VCs have used for decades to generate incredible wealth outside the stock market.

Diversification Is Your Shield

Look, we’re in the longest bull market in U.S. history.

It’s obviously an extended run, but there’s still more upside ahead. Just remember, it hasn’t been a straight line up. Along the way, we’ve seen a lot of volatility. The ongoing trade war is the latest example.

Volatility is the new normal. You just have to get used to it.

However, adding cryptos, collectibles, and private placements to your portfolios will generate long-term outperformance – and shield them… even during tough times.

Bottom line: If you diversify your portfolio using proper asset allocation, you’ll be prepared for wherever the market goes next.

And now, for the first time ever, I’m going to show how anyone can get in on these same deals. In fact, I’ll reveal one amazing private company you can invest in right now.

I found this company after traveling around the globe, scouting for the best private companies in the cannabis space…

You can get in for just 50 cents a share today. It’s expected to go public at $1 in the next few months. That’s as close to a guaranteed double as you can get. And I’ll show you how to get in now, before the legalized cannabis trend takes off…