PARIS – A sad day in Paris. In this, the holy week of Christendom… one of its most sacred and beautiful monuments caught fire. The conflagration was reportedly brought under control around 3 a.m.

And when dawn came, Parisians found Notre Dame “disfigured, but still standing.” Its oak beams – dating from the 12th century – were charred and still smoking… its roof had caved in.

It’s “catastrophic,” says a friend who lives nearby.

The gargoyles of Notre Dame against the blaze

Adolf Hitler tried to destroy Notre Dame. He sent the order to his man on the scene, General Dietrich von Choltitz, to blow up all the city’s monuments, its bridges, its railroad stations – everything.

He wanted the city leveled. He knew the allies would take Paris soon (they were advancing toward it from Normandy), but Hitler insisted that Paris be “complete rubble” when they arrived.

On the 24th of August, 1944, Hitler telephoned von Choltitz. “Brennt Paris?” (is Paris burning) he asked.

But by then, two things had changed. First, von Choltitz saw which team the gods of war were on… and he had no trouble imagining himself in front of an allied military tribunal or a firing squad after it was over.

He preferred to face the music as the “savior of Paris” rather than its destroyer.

Second, he had become convinced that der Führer was mad. It was just a matter of time, he reasoned, before Hitler went off the rails completely, the war would be lost, and all the fantasies of the Nazi regime came to an end.

According to one account, he answered Hitler’s call with sarcasm:

“Yes, Notre Dame is burning. The bridges have all been blown up. And I’m personally breaking the stained glass windows in the Sainte-Chapelle.” [Built by St. Louis in the 13th century.]

By then, it was not Hitler that von Choltitz feared, but French resistance fighters.

They were firing on the remaining German troops from rooftops all over the city. Von Choltitz tried to make a deal with them. He wanted to surrender, but he was careful about whom he should surrender to. Many of the resistance fighters were undisciplined; they might hang him immediately.

On August 25, a unit of the Free French army entered the city; von Choltitz surrendered as soon as they arrived at his headquarters in the Hôtel Le Meurice.

Later, von Choltitz was held in prison in England, along with other leading officers. Their conversations were secretly recorded. In one of them, the general recognized his error:

We all share the guilt. We went along with everything, and we half-took the Nazis seriously instead of saying to hell with you and your stupid nonsense. I misled my soldiers into believing this rubbish. I feel utterly ashamed of myself. Perhaps we bear even more guilt than these uneducated animals.

Today, 75 years later, perhaps only one single, distorted face, looking up from his ashpit in Hell, takes some demonic pleasure…

But many are those – the “uneducated animals” – who still think they can bang, bend, and bamboozle the world into a better shape.

In America, they seem to be divided into two camps. The one – where socialists and assorted other leftists hang out – believes that capitalism has failed terribly… and it should be abandoned.

The other – which attracts Wall Streeters and Republicans – believes that win-win capitalism is valuable, perhaps even indispensable. But, they say it needs to be controlled, directed, and reformed.

Our task tomorrow: to figure out which claptrap is most dangerous. The half-wits on the left? Or the dimwits on the right?

Below, he shows how tuning out the negative headlines on “hated stocks” can lead you to quick, big gains…

Several years ago, I became bullish on an idea that the rest of the market had left for dead.

The companies in this sector weren’t the kind you’d bring up at a cocktail party.

And they certainly weren’t the market darlings you hear about every day on CNBC or on the cover of Fortune.

You may have to look closely for these opportunities, but it’s well worth your time. Once the market realizes its mistake, the gains can pile up fast.

My potential bad-to-less-bad candidates were airline stocks – which legendary investor Warren Buffett had criticized for decades. As he noted in his annual Berkshire Hathaway letter to shareholders back in 2007…

The worst sort of business is one that grows rapidly, requires significant capital to engender the growth, and then earns little or no money.

Think airlines. Here, a durable competitive advantage has proven elusive ever since the days of the Wright Brothers.

Indeed, if a farsighted capitalist had been present at Kitty Hawk, he would have done his successors a huge favor by shooting Orville down.

But then, the industry slowly got better. What changed? Simple: The industry consolidated. Over the past decade alone, we’ve seen mergers between Northwest and Delta, Continental and United, AirTran and Southwest, and U.S. Airways and American Airlines. These four companies collectively control about 80% of the U.S. airline market, making it an oligopoly.

And they’re behaving like an oligopoly, minimizing the incessant price wars that once plagued the industry. Plus, the airlines crammed more seats on their planes and started charging to check bags. The combination of higher prices and lots of ancillary fees generated billions in new profits.

This allowed the airlines – which historically had terrible, debt-laden balance sheets – to slowly pay down their debts and improve their financial footing. The fundamentals got a big boost while nobody was paying attention.

My first opportunity to profit from this was JetBlue Airways (JBLU). I had gotten to know the company when I wrote a series of five articles about it starting in June 2003. I hadn’t bought the stock, but I followed it closely over the next decade.

I finally got my chance and bought shares in 2014, when the company made big improvements. It followed its peers by charging bag fees, squeezing more seats on the planes, and launching a first-class cabin on transcontinental flights. Not only that, but a new CEO was taking over, and my contact at JetBlue told me he was the real deal.

I could see that profits were set to soar – and they did. Operating profits tripled in 18 months – and so did the stock… 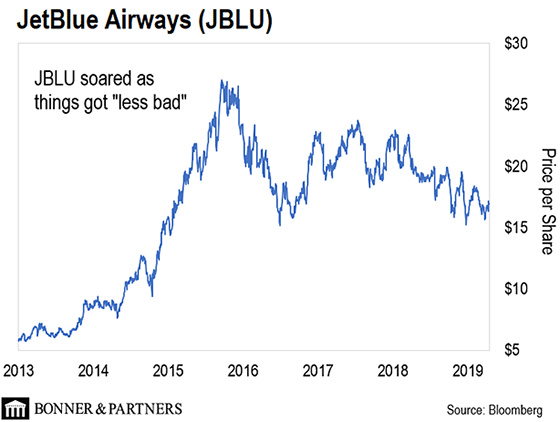 Years later, in November 2015, I told Bloomberg TV’s Stephanie Ruhle that discount airline Spirit Airlines (SAVE) was my favorite long idea. The stock nearly doubled over the next year.

Buffett himself eventually came around to the idea of going long airlines. In 2016, he scooped up shares of American Airlines (AAL), United Continental (UAL), and Delta Air Lines (DAL). In early 2017, he appeared on CNBC and joked…

The airlines had a bad 20th century. They’re like the Chicago Cubs. And they got that bad century out of the way, I hope.

Things didn’t go from good to great with airlines. They didn’t have to. They merely went from terrible to mediocre. And folks who took my advice made a lot of money because of it – and fast.

The next time a hated stock or industry catches your eye, tune out all the negative headlines and analyst “sell” recommendations, keep an open mind, and take a fresh look. Maybe the fundamentals are quietly getting stronger, or sector-wide pressures are letting up.

All it takes is a little improvement… And chances are, you’ll walk away with quick, big gains.

Editor’s note: If you’d like to learn more about how Whitney searches the markets for big potential winners, mark your calendar… Tomorrow at 8 p.m. ET, he’s airing a special event to announce his newest prediction – one that could help you double or triple your money, starting this year. For more details (including how to tune in for free), click here.

Why Google Is a Dragnet for the Police
Law enforcement officers are now tracking cell phone users’ locations. How? Access to an enormous Google database. In an era of ubiquitous data gathering by tech companies, this is just the latest example of how personal data is being used for things we couldn’t have ever imagined. Though this new technique could solve crimes, it could also snare innocent people…

America’s Biggest Money Regrets
In a recent survey, Americans approaching retirement reflected on their financial follies. From not saving enough money, to dipping into retirement savings too early, it’s a lot of woulda, coulda, shoulda. But, maybe younger generations could heed warning from some of these retiree regrets…

The Real Motivation for FacebookCoin
Our editor has been critical of social media giant Facebook. And for good reason. The company regularly “mines” your personal data and sells it to the highest bidder… but it knows it’s in hot water with regulators. And Bill’s top tech expert, Jeff Brown, reveals Facebook’s atomic option to save its own skin…

Today, a mixed mailbag: Why consumers foot the tax bill… how currencies will inflate to nothing… and are the central banks “going Japanese”?

I have enjoyed reading your columns on the U.S. economy. Having done costing for a pharmaceutical production company, every cost for a product is well known. The cost of raw materials, labor, energy, overhead, marketing, profit margin, etc., are well defined and accounted for. Electronic platforms have greatly enhanced this capability.

The projected tax is also included with the supplier cost. When the item is purchased, the buyer actually pays the tax on the item. What confuses me is big companies don’t pay taxes, the consumer pays the tax! I do not believe the average citizen realizes that he is paying the supplier’s tax bill. The fact that the business tax rate has been cut sends this saving directly to the profit line. Cutting the business taxes should reduce the cost of the product, yet costs are going up? With the advent of inflation and tariffs, what small tax break the middle and lower class got has evaporated. Then again, I live in New Jersey and I didn’t even get a tax break.

Buy cash-producing assets like rentals, gold, silver, and commodities. Then get out of currencies, for they will inflate to nothing.

Just some thoughts on central banks buying equities… Central banks bought gold in large quantities in 2011 at the (so far) top price. This did not stop the market from selling off. It merely resulted in central banks owning gold, which they overpaid for. I believe the same would result with equities.

This talk of all central banks “going Japanese” with debt and stimulus is very possible. However, I don’t think it’s going to result in a stock melt-up and a permanent Zombie high market at those new levels. The American stock market and “Everything” bubble will crash at some point, regardless of central planning crooks. The main end accomplishment of the fake interest rates and money printing will be the destruction and vilification of capitalism.

I cannot help but recall many years ago living in California and listening to a liberal talk show station. One host had a guest on to tout a new bond issue. Well into his spiel, he mentioned the interest and due date for redemption, whereupon the talk show host exclaimed: “You mean we have to pay the money back?”

Something strange is being discussed at the highest levels in Washington…

That’s the message from Dan Denning, Bill’s coauthor on The Bonner-Denning Letter.

Call it socialism… call it financial martial law… call it the death of win-win capitalism. It’s all the same thing. And it’s coming faster than you think. Full story here. 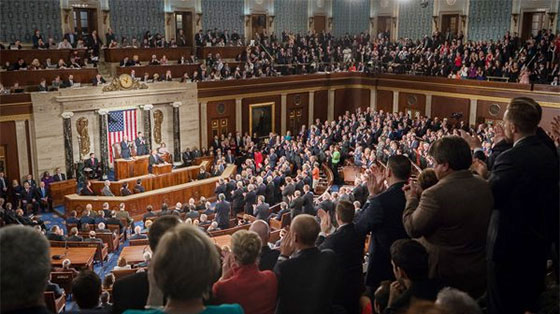