Credo quia absurdum (I believe because it is absurd).

You can’t make this stuff up.

BALTIMORE, MARYLAND – Stocks went nowhere yesterday. Congress and the White House didn’t get anywhere, either, in their attempts to resolve the shutdown impasse.

With 10 inches of snow on the ground, nowhere seemed like the right place to go. And nowhere is where most people end up anyway.

But our aim is to go somewhere – into the future. We want to see what happens there. And we begin by wondering how we get there.

The mega-myth of the Bubble Epoch is that we can go anywhere we want – thanks to the genius of quasi-federal employees.

It must be true, people say, because it is so implausible. You can’t make stuff like that up.

The idea is that Congress and the White House skillfully adjust fiscal policy (deficits or surpluses) to offset the bipolar tendencies of capitalism. Free markets always go up and down. The feds want to make them go in one direction only – up.

So as soon as a shadow falls on the financial world, the feds rush in with mood-stabilizers… in the familiar form of more money and credit.

The Fed, meanwhile, has a more ancient approach. Its Federal Open Market Committee (FOMC) members put on their black, hooded vestments and gather in the temple on the corner of 20th and Constitution Avenue. There, they turn to Jupiter: “Just give me some kind of sign.”

In Rome, the augurs were priests tasked with interpreting the will of the gods based on birds, dogs, thunder, or “ominous events.” Today, prophecies are based on fake “data” – compiled by the feds themselves.

At least the priests in Rome didn’t cheat on the signals!

But every age has its busted dreams and failed myths… ideas so apparently absurd, you can’t make them up!

In Washington today, there’s a shutdown and a showdown. The shutdown has idled many of the number crunchers on whom the Fed says it depends. But the showdown is going strong.

But our guess is this: Neither of them has the power to drive Mr. Market anywhere. In the end, we go where he wants us to go.

The feds can influence markets – to an extent… and for a while. But it’s always Mr. Market who has the last laugh. And we think he’s getting ready for a big one.

The post-1971 paper dollar (with no fixed connection to gold) has survived seven Fed chairmen and nine U.S. presidents.

But it still hasn’t survived an entire credit cycle; which is to say, in the long contest between man and markets, Mr. Market is still undefeated.

Debt markets move in long cycles. The last full cycle began with a bottom in yields (a high for bond prices) after World War II. Thereafter, interest rates rose for the next 35 years, reaching a cyclical high in 1980, when you would have been lucky to get a mortgage rate under 18%.

It was in the middle of this cycle – in 1971 – that today’s dollar appeared; and it was an imposter.

People had learned by bitter experience that they couldn’t trust bankers or politicians with their money. The dollar needed to be calibrated in something they couldn’t fiddle – gold. Otherwise, its custodians would find the temptation to “print more money” irresistible.

Here at the Diary, we are not particularly good at auguring. But even we saw the dark storm clouds gathering that August evening in 1971. We knew there would be trouble.

That is, of course, what has happened. The feds “printed” money – beaucoup money. The monetary base of the U.S. in 1970 was less than $100 billion.

Today, it is made up of $3.4 trillion worth of various debt instruments – mostly IOUs from the world’s biggest debtor, the U.S. government. The bankers couldn’t say no.

But so far, so good.

If the system can avoid any serious incidents between now and when the full cycle runs its course – until about 2040 – we will be happy to sing its praises.

We doubt we will have to.

First, because we doubt the dollar will still be here in its present form. And second, because we might not be, either.

Having encouraged the world to borrow – with low rates, EZ money, and rising asset prices – the feds now face the predictable problem.

They funded the boom of the last 30 years with debt – which increased, year after year, 2-4 times faster than the GDP needed to pay it.

And what now? How can they keep the expansion going without adding even more debt? And what happens when the price of government bonds falls (as interest rates rise)?

What happens is this: The economy goes into a depression. Real rates go over 10%. Businesses fail. Stocks get cut in half (the Dow already seems to have topped out – in October 2018).

Think people are unhappy now? You ain’t seen nuthin’ yet!

And the feds? Will they ask themselves why they ever believed anything so vain, foolish, and preposterous? Will they be able to stand firm and tall, like Paul Volcker in 1982… waiting for Mr. Market to do his work?

They’ve built their reputations, power, and fortunes on a myth… an absurd, cockamamie dream.

What will they do, Trump and Powell, when it turns into a nightmare?

Let’s look at it tomorrow…

MARKET INSIGHT: WHY THE “SMART MONEY” IS WORRIED

As Bill wrote, when the economic cycle turns, the country goes into a recession; stocks will fall.

And Bill’s not the only one worried about this.

Yesterday’s chart suggested that the “smart money” – institutional investors – plans to get out of stocks in 2019. It showed how BlackRock’s – the world’s largest asset manager – clients plan to reduce their exposure to stocks by 37%.

Today’s chart shows why: Institutional investors are worried about the economic cycle turning from recovery to recession this year… 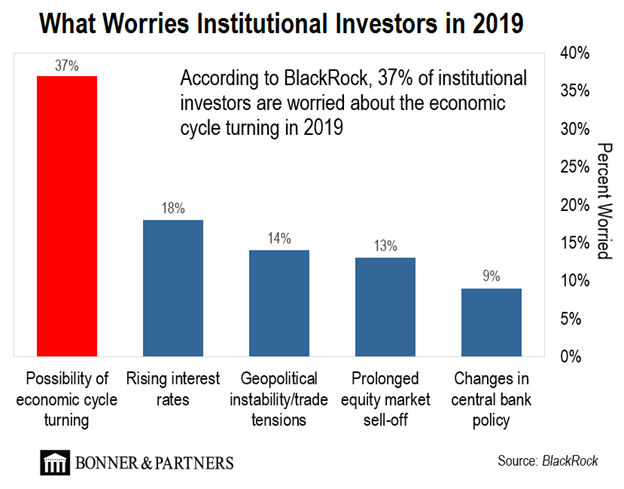 According to BlackRock, 37% of institutional investors are worried about the economic cycle turning in 2019.

The economy is by far the biggest concern for institutional investors… And you can see that their other concerns go hand-in-hand: rising interest rates, geopolitical tensions, a prolonged equity market selloff, and abrupt changes in central bank policy.

Our message has been the same for the past two weeks: Do not let the current snap-back rally fool you. The financial media has been quick to proclaim the correction is over… but there’s a good chance it is just beginning.

The Death of Competition
Monopolies are back. Like Standard Oil and AT&T before them, a handful of companies stand unopposed in their industries. The lack of competition is proving to be a drag on growth. And regulators aren’t sure what to do about it.

Americans Want Legal Pot
The stigma around cannabis appears to be fading. According to recent polling, 66% of Americans are in favor of legal pot, the highest percentage ever.

Why Trump Must Legalize Cannabis
What will be President Trump’s defining legacy? According to Casey Research’s Nick Giambruno, it won’t be tax cuts… tweets… or even “The Wall.” Instead, Trump could go down as the president that brought legal pot to America.

Today, a mixed mailbag: Alexandria Ocasio-Cortez… “The Wall”… and who’s the “lame and loopy” one?

I realize this is your opinion about Alexandria Ocasio-Cortez, and it is just that. I totally disagree. And everyone has an opinion which should sometimes be kept to yourself. You have no basis for your assessment. So have your opinion as one person and let others have theirs. If you want to say someone is a danger to the nation, he is sitting in the White House.

They are illegal and that makes them criminals. I guess illegal means nothing today.

Aloha Bill, I want to thank you for all the articles you are putting out. I have to say, I agree with you on almost all of your assessments and perceptions of our world. I always get a kick out of your stories. The witty humor you add beautifully balances out your commentary on all of the not-too-sunny situations we as humans are finding ourselves in.

As you noted, historically and in the big picture of life, long term, these walls are not really worthwhile…… unless one wants a new tourist attraction for people to visit a hundred years from now. I see it as a simple-minded solution. That money can, and should, be spent on actually solving the problems that are causing “illegal immigration.” Getting rid of the people causing the mess in the first place – many of whom are insiders/U.S. citizens in our own government – instead of scapegoating the immigrants, is a better solution.

I have this radical thought that every American who is not Native American is “illegal” because none of the original inhabitants whose land was stolen ever gave any one of us permission to be here. “Legal/illegal” – these are just labels. Just like the Danes, Saxons, Anglo-Saxons, and other tribes back in medieval times, who are now the one people that make up England.

It’s you and your billionaire cronies who are “lame and loopy.” The Reaganist policies that put you in your current position have been proven wrong – “trickle-down” is a lie. Most of your readers are probably NOT earning $10 million per year, so they shouldn’t mind if your taxes go up. In fact, most of your readers probably don’t “earn” anything; they exploit the labor of others to do their earning for them. Let them bake cake.

This former Wall Street broker left New York when he discovered this. The average gain from his top 150 plays using this method is an astonishing 2,418%.

Most investors will never see this. But this is your chance to beat Wall Street at its own game. Details here. 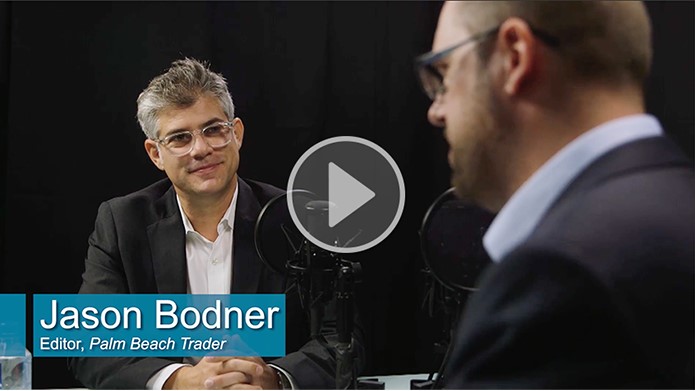