BALTIMORE, MARYLAND – We got ahead of ourselves yesterday.

We were waiting for the big Fed announcement on a rate hike. But what happened? No trumpets. No bells. No heralds. None came.

Finally, we realized it was Tuesday, not Wednesday.

So, today’s the big day… not yesterday. All eyes with nothing better to do turn to the Fed. Lonely eyes. Sad eyes. Troubled eyes…

…and the hopeful eyes of Mr. Donald J. Trump.

The Fed faces a tough choice. It can continue to raise interest rates, as planned, in defiance of Mr. Trump… or it can put its tightening program on pause.

The modus operandi of the Fed and the president are now well known. The Fed eases too much for too long. Then, it tightens, setting off a correction. And then, it panics and slashes rates again.

Mr. Trump, meanwhile, starts a fight… causes a big ruckus with insults and wild charges… And then, he announces a victory, while quietly backing off.

The media loves it. One fight after another… the mud flies… the spectators gawk…

The fans think Trump is fighting for them. Critics think he is fighting against them. And life goes on.

But this fight – between the Fed and the president – is different. Most likely, the Fed will pause. But whichever way it goes, both sides lose.

In a tweet on Tuesday, President Trump made it clear which way he wanted the Fed to go:

I hope the people over at the Fed will read today’s Wall Street Journal editorial before they make yet another mistake. Also, don’t let the market become any more illiquid than it already is. Stop with the 50 Bs. Feel the market, don’t just go by meaningless numbers. Good luck!

You gotta love the prez. He is living proof of the American dream; that anyone who inherits $400 million can still grow up to be rich.

But where did he get the idea that the $30 trillion stock market was “illiquid”? Or that the Fed’s mistake was to raise interest rates… rather than leave them too low for too long?

As for the “meaningless numbers,” those are the same numbers Mr. Trump cites as proof of what a great job he is doing.

And “feel the market”? All investors are feeling is pain and puzzlement. They thought POTUS had their backs. And already, stocks are down nearly 20%. As Joe Withrow shows in today’s Market Insight below, roughly half of all U.S. stocks are now in bear market territory.

Approximately $6 trillion has been trimmed from the wealth of the people in the rich zip codes. And if former fed chief, Alan Greenspan, is right, whether the Fed pauses or not, there will be plenty more losses still to come and plenty of blame to go around. From CNN:

Greenspan said it was unlikely that the current market would stabilize and then take another big leg higher. “It would be very surprising to see it sort of stabilize here, and then take off again,” Greenspan said. Markets could still go up, but “at the end of that run, run for cover.”

Greenspan told CNN the bull market is over, pointing to how stocks have fumbled in recent days. On Tuesday, stocks rallied but they tumbled on Monday and have been in a decline since October, weighed by concerns over global trade conflict and slowing global economies. The S&P was on track, as of Monday’s close, for the worst December since 1931.

Much of the blame will fall upon the Fed. But some will splatter onto Mr. Trump’s red tie, too. Had he known what time it was, he would have pushed the Fed to do more normalizing last year… That would have brought on a correction when it could still be called Mr. Obama’s crisis.

Then, the president could have gone on the attack… taking up fights that really mattered – cutting spending, reshaping the Fed, draining the Swamp, opening up the files of “classified” claptrap to public ridicule, putting the Deep State in its place. (None of that was ever likely to happen… but it would have been fun to watch the Great Disrupter disrupt something worth disrupting.)

But we are passing the midpoint in Mr. Trump’s reign. And the president now insists that this is His economy… that He is responsible for it… and that if anything happens to it, it will be over His dead body.

And maybe, we will never know for sure what’s going on… or what time it is.

But at least people are starting to look at their watches.

MARKET INSIGHT: THE BEAR MAY ALREADY BE HERE

Half of all U.S. stocks are already in a bear market…

Today’s chart maps the Russell 2000 index, which tracks 2,010 U.S. stocks – roughly half of all the publicly traded stocks in the country – from the start of 2017 through today. 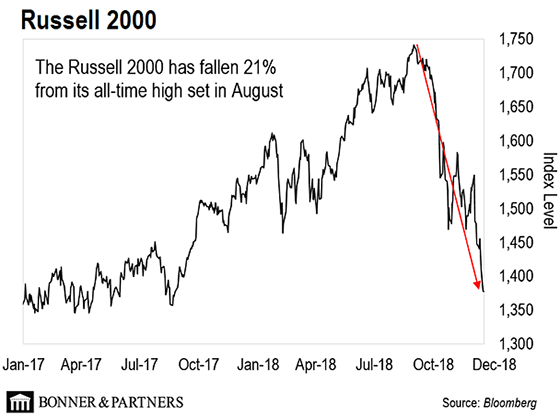 And since bear markets are commonly defined as downturns of 20% or more, this means roughly half of all U.S. stocks are in a bear market right now.

As Bill wrote above, we will wait to see if the other major indices will soon follow the Russell into bear market territory.

To that end, keep an eye on the Fed’s decision on interest rates today. If Fed chair Jerome Powell holds off on further rate hikes, markets should rally… at least in the short term.

But if the Fed continues its program of rate hiking… look out below.

A “Dovish Tightening”
As Bill wrote above, Fed chair Jerome Powell is in a bind. Does he continue to hike rates in defiance of President Trump and risk a market selloff? Or does he pause the “tightening program” and give the bull market some breathing room? Or there’s door number three… He could do both.

How the Trade War Kickstarts This Forgotten Industry
The trade war may ultimately be a drag on long-term growth. But in one corner of the market, it’s setting up a rebound for a long-forgotten industry.

Addicted to Negative-Yielding Bonds
As Bill has written in the past, many of today’s supposedly safe bonds are actually losing you money. New data shows that, when adjusted for inflation, $7.9 trillion in bonds is yielding a negative return. Still, investors are gobbling these bonds up. Here’s why…

Today, another sampling in the mailbag: Talk of interest rates… government spending… and is the mailbag too full of “Trump fanboys”?

Powell is a lawyer, not an economist. His mess started long before him, and he does not do it any good whenever he comments on the market. I agree with Mr. Bonner and so many others – the market should set the rates, and our currency should be backed with gold, making it money again. Only this time, do not print more certificates for the gold (pretty pieces of colored paper) than the gold we have to back it. Okay, I can dream, can’t I?

Mr. Bonner, if the U.S. does not stop feeding and caring for South America and Mexico, we will certainly go broke. If we don’t curb the spending on salaries for past politicians, retirement, healthcare, and security, we will go broke. There just are not enough taxpayers to go around. I am one of them, and I can tell you we are all sick of it! So pass this email on to Congress and the Senators so they will figure it out and see that there is no money for the extravagant lifestyles they have! Thanks.

It’s bad enough that you give so much “air time” to Trump fanboys, but now, we have to put up with you devoting precious editorial space correcting the mindless impressions about you by this irrational crowd. I, for one, am getting very weary hearing from people who read so poorly, or whose memories are so short, that they see you as a liberal Democrat, or who eschew all rational arguments you have presented concerning Trump’s utter incompetence.

Now, Jeff is making another bold call. See why Jeff expects this tech trend to soar next year, no matter what happens to the stock market. Go right here. 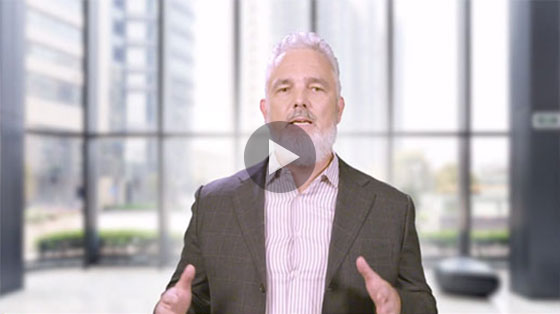