YOUGHAL, IRELAND – Yesterday was a good day for our Dow-to-Gold trade. Gold rose as high as $1,286. And the Dow see-sawed on the minus 400 mark before recovering somewhat late in the day. And you didn’t have to look very hard to see why.

A whole cluster of dark dots appeared in the sky above Manhattan this week.

It’s beginning to look more and more like 2008… or 2000… or 1929. The leveraged loan market of 2019, for example, looks a lot like the mortgage market of 2008, with $1 trillion of debt and securities packaged with tranches of mystery meat and stuck together like a bad sausage.

The epicentre of the last financial crisis was the implosion of junk bonds – the bundles of securitized sub-prime mortgages labelled as collateralized debt obligations, or CDOs.

If there were to be another crisis, it wouldn’t be at all surprising if it started with a meltdown of junk bonds again – this time bundles of securitized sub-prime loans labelled as collateralized loan obligations, or CLOs.

How great is the risk? Colleague Dan Denning is on the case in the latest issue of the The Bonner-Denning Letter [paid-up subscribers can read the full issue here]:

CLOs are the new CDOs: baskets of risky corporate loans that have been bundled together to “disaggregate” the risk. The result is at least a trillion dollars’ worth of ticking time bombs.

This time around, CLOs are buried on the balance sheets of pension funds, insurance companies, and banks that have yet to unload them on unwary investors. If our analysis is correct, they’re ready to erupt out of Wall Street’s sewers and onto Main Street America.

Mr. Trump’s argument, provided by the Commerce Department, is that “the lag in R&D expenditures by American-owned producers is weakening innovation and, accordingly, threatening to impair our national security.” Therefore, “domestic conditions of competition must be improved by reducing imports.”

Never mind that Toyota, Honda, Volkswagen, Mercedes-Benz, Mazda, BMW, Subaru, Nissan, Kia and Hyundai all make or assemble cars and parts in the United States. The nearly 500 facilities are located in multiple American states and directly employ 130,000 Americans. Volvo has a plant in South Carolina that may employ 4,000. By the proclamation’s logic, the only car companies that matter to U.S. security are Ford, GM, Tesla and maybe not even Fiat Chrysler, since Italians are significant owners.

There’s no attempt to understand why research and development (R&D) lagged. No pretense of trying to “level the playing field” or of a negotiating tactic to “get a better deal.” Just pure, dumb protectionism.

A few Americans win. Everybody else pays higher prices for lower-quality autos.

And without the hot breath of rivals breathing down their necks, U.S. automakers can reduce R&D further and doom the entire industry to never again being able to compete in international markets.

Win-lose all the way.

Third, the U.S. came down on China’s Huawei – maker of phones and other tech equipment – too. American technology firms will not be able to sell to Huawei without the American feds giving the say-so.

The feds say the Chinese are “adversaries.” They claim they don’t want valuable technology ending up in Chinese hands. They say that the Chinese will spy on us through our online networks.

Naturally, the foreigners are learning not to trust U.S. suppliers… and are looking for essential inputs elsewhere. Win-lose again… with little chance that the U.S. will be a winner.

Finally, the hopeless high techs are back, too. Today, they’re called “unicorns” and they’re destroying capital – billions of dollars’ worth – just like dotcoms did in 1999. From Dear Reader John D.:

Uber Technologies, Inc… suffered a $655M market loss on its first trading day… with net income from continuing operations: 2016: $3.246 billion, 2017: $4.033 billion, and an unreported (on Yahoo finance) multi-billion loss, as of December 31, 2018. Its EBITDA [earnings before interest, taxes, depreciation, and amortization] is a mind-numbing -$2.4 billion…

Is our tattered Crash Alert Flag – that we raised a month ago – still flying?

You bet it is.

TRADING INSIGHT: THE SELLING ISN’T OVER YET

Editor’s Note: As Bill said above, his “Crash Alert Flag” is still flying. And he’s not the only one who sees something ominous coming in the stock market…

Master trader Jeff Clark sees troubled times ahead for the market. But, with 36 years’ experience in the stock market, Jeff has developed a successful, short-term trading strategy that he shares with his Delta Report subscribers.

Below, he shows readers why the market has further to fall… and why short-term traders could play this fall to their advantage…

As I recently told readers of my free e-letter, Market Minute, we were expecting some selling pressure this week. And we sure got it. The S&P 500 is down 37 points, or about 1.3%.

Technical conditions are now slightly oversold. So, the market may try to bounce at any moment. But any bounce from here is likely only to last a day or two. The market has further to fall. 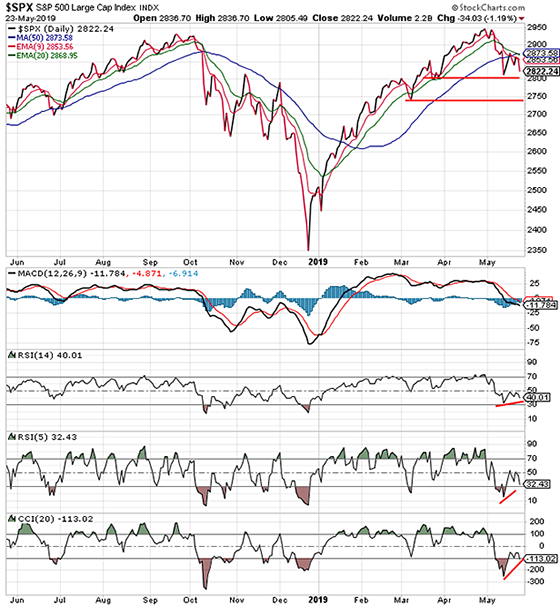 The index is in the process of retesting the low – near 2,800 – from earlier this month. That’s an obvious support line. And, when we got close to that level yesterday, buyers stepped up and the S&P 500 bounced about 16 points off the low of the day.

All that really did, though, was prevent the various indicators at the bottom of the chart from dipping into oversold territory and creating the conditions from which a sustainable rally can begin.

If you take a close look at the various moving averages on the chart, you’ll notice they have completed the “bearish cross” I wrote about on Wednesday. That’s a pretty strong indication that if the S&P 500 tests the 2,800 support level again in the next few days, it’s probably not going to hold.

A break below 2,800 could lead to a quick move lower, down towards the next support level near 2,750.

The good news, though – at least for short-term traders – is that if the market does fall further from here, then several of the various technical indicators are set up to create positive divergence on that move. That happens when the market makes a lower low, but the indicators make a higher low. And that creates the condition for a more sustainable rally.

So, as I’ve been telling my Delta Report readers all week, the intermediate- and longer-term trends for the stock market look bearish to me. The short-term trend looks bearish for a few more days. Then, we might get the conditions for a short-term, tradable bounce.

P.S. One of the best things about my Delta Report trading strategy is that it allows my subscribers to make money no matter what the market does… if there’s a bounce higher, a dip lower, or even a move sideways.

And with the crash I see coming later this year, it’s more important than ever to ditch the “buy-and-hold” strategy. To learn how I set my subscribers up for triple-digit profits, and how to protect yourself from the upcoming crash, read on here.

The Search for a New Prime Minister in the UK Is On
Theresa May announced she will step down as the Prime Minister of the UK. In a tearful speech, May admitted she failed to deliver the one thing that defined her time in office: taking the country out of the European Union. Now, the attention shifts to the leadership battle ahead… Who will be her replacement?

Amazon Is Facing a Rebellion of Shareholders
Many see the advent of facial recognition software as a chance for the government to suppress citizens. It could create a full-blown surveillance society, they fear. And that’s one of the reasons Amazon shareholders are rebelling against the company’s own software…

Gold May Be Down But It’s Never Out
There’s one ratio to pay attention to if you’re looking to buy gold. That’s according to master trader Jeff Clark. And while the gold sector has been “dead money” for two years, this ratio may be flashing a “buy” right now…

Today, dear readers are torn on “Why We’re Not on the Trump Bandwagon”…

I am moved to write because so many of your readers seem to be on Trump’s bandwagon. You can be interested in making money, interested in the survival of capitalism, and still adhere to the ideal that truth matters. Is that too old-fashioned? And if you think truth matters, then you can’t also ride that bandwagon – it’s literally impossible. Truth matters. Please keep connecting the dots.

So you like Bernie or the crazy Dems, then? There are only two sides to pick from.

Please stay the course you have set to explain the world as it should work. I find it inconceivable that someone could enjoy reading your insights and still support Trump and his Swamp.

Trump is the only guy in the world (that I know) trying to solve most of your “complaints.” Your reply to him seems to be “It can’t be done”… Too bad the Trump Train left you behind.

Maybe they acted like children and did not deserve respect… lowering themselves by going on The Tonight Show or tweeting all day. These are not presidential things that gain respect. President Reagan all the way back to President Truman respected their job as president and did not lower themselves to the level of the masses. The masses have to have a president they can look up to and respect enough to lead them. Maybe that is what we have lost… respect for the president and respect for ourselves. Maybe that is why everyone is so angry at everyone else… no respect from the top down.

If you’re worried about a market crash…

Watch this replay of the 2019 Crash Summit. The man who predicted the 2008 crash will reveal the exact day stocks could plummet this year.

And why it’ll take shape as a unique type of crisis 99% of Americans will never see coming – which could either destroy your life savings, or potentially make you a fortune… if you’re ready.

Click here to watch this presentation before it goes offline. 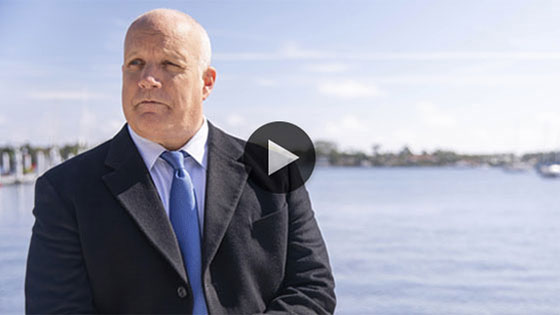