PARIS – Well, it’s all settled. This is the greatest economy that the world has ever seen.

The president said so himself on Twitter over the weekend:

The Nasdaq hit a new record high – pushed up by its favorite tech stocks. And the latest jobs report tells us that unemployment is at 3.8%, a 50-year low.

When the president refers to making America great again… that is probably what he has in mind.

We remember 1968. We were still in college. And in the summer, we had to quickly get a job to earn money so we could pay tuition for the following year.

As we recall, after two days of replying to want ads, we had two offers.

One was in a boatyard in Annapolis, scrapping hulls and painting the “bright work.”

The other was in a motley crew of half-wit foreigners in Baltimore, climbing TV towers to put on a coat of rust-preventing paint.

Neither were great jobs. The second was also dangerous, but it paid better. We earned $5.35 an hour, which wasn’t so bad in 1968.

And over the summer, we saved up about $1,500 – which was enough, barely, to keep us going for another year, assuming we continued our on-campus job of washing dishes in a frat house kitchen in return for free food.

Can an unskilled person find work so easily today? We don’t know.

According to the figures reported last week, 40% of adults can’t scrape together even $400 for emergencies. If it was so easy to get work, you’d think there would be fewer Americans with empty pockets.

Besides, the Bureau of Labor Statistics (BLS) figures are mostly nonsense – The Donald said so himself when he was running for office.

He referred to the BLS numbers as “the biggest joke in the country.”

But now that he’s The Man, the joke is on the other foot; nonsense is a lot more appealing.

Now that he is in charge, the economy is great… the BLS tells the truth… and America is getting better and better every day.

An investor might have expected it to go down from there, since it had been going up for more than 25 years.

But woe to the speculator who went short. The index rose another 200% over the following two years, and was at a record high of over 5,000 when the end finally came in 2000.

Nature hates excess, and every bubble finds its pin.

The Nasdaq crashed in 2000, with investors giving up 70% of their money… and then, they waited 14 years to be made whole again.

Now, the Nasdaq is again at a record high… it races ahead, and it dares not sit down; there are pins in every cushion.

Perhaps the biggest threat is the president himself… who is practically a briar patch of barbed opinions and prickly acts.

Like every sentient being, we have been watching The Donald Show with both amusement and alarum.

The usual categories of American politician – slimeball, ideologue, glad-hander, or hack – don’t suit Mr. Trump. Like a show with a bad scriptwriter, spectators don’t know whether to laugh or cry.

We don’t know, either. But our guess is that America’s president is more a feature of his time… than it is of him.

Like mud on a fender, history tells us where it has been.

The U.S. has been in a decline ever since we were painting TV towers for $5.35 an hour. Debt, laws, regulations, and lobbyists have piled up.

And the real measure of any president, before or since, is whether he resisted the win-lose deals… or encouraged more of them.

Win-lose deals are how the Swamp does business. Conniving. Stealing. Plotting. Backstabbing. Lobbying. Chiseling. And always using the power of the government to get an advantage. The insiders pass laws as dense as Christmas pudding. Then they get hired to help companies find the plums.

Just look at what happened to the people who put together the law that The Donald thinks is making America great again – the tax cut. From the newspaper The Hill:

Republican aides in Congress who were instrumental in writing the sweeping tax law last year are hitting the exits to take jobs in the lobbying industry.

Cashing in on K Street [where the lobbyists are] is a common move for congressional staffers in both parties, especially after major legislation is signed into law. Something similar happened after Obamacare passed in 2010.

In the two years after President Obama signed the Affordable Care Act, more than 30 former administration officials, lawmakers, and congressional staffers that had worked on the law joined the K Street ranks. The numbers have likely grown since then. What Obamacare was for Democrats, last year’s tax law was for Republicans…

Democrat. Republican. It hardly matters. When the swill hits the trough, the pigs come a-running.

And MAGA? Probably not.

ECONOMIC INSIGHT: THE TRUTH BEHIND THE JOBS REPORT

As Bill reported, there’s an impressive jobs report out from the Bureau of Labor Statistics (BLS). Markets were up on the news that U.S. unemployment is at a 50-year low of 3.8%. 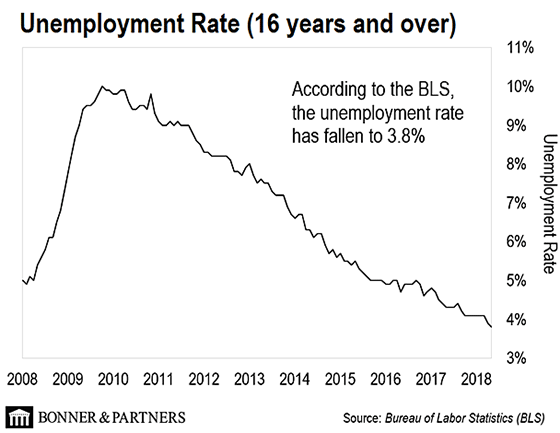 According to the BLS, the economy (let’s not forget that that means mostly small businesses run by real people) created 223,000 jobs in May. The BLS also stated that wages are growing at 2.7% per year.

But not everything is as it seems. And how much can you trust statistical surveys to tell you what’s really going on in the economy for most people? I ask the question after skimming (somewhat ironically) a report published by the Federal Reserve called the Report on the Economic Well-Being of U.S. Households in 2017.

Over 30% of American adults worked in what some people call the “gig” economy. The Fed calls it “alternative work arrangements.” It could be driving an Uber for a few hours a week, selling items on eBay or Craigslist, or doing some daycare and house cleaning on the side to generate cash and extra income.

Assuming it’s correct, how would you read this data? On the one hand, you could argue that it shows that Americans are hustling to earn a few extra bucks on the side. It’s a sign of how entrepreneurial and hard-working the middle class is. That’s one way of reading it.

The other way is that the American labor market has undergone a fundamental structural change since the late 1970s. You could buy a house, raise a family, send the kids to college, and retire at a reasonable age in an economy where manufacturing jobs made up the largest part of the job market. You might even have had a defined benefit pension!

But the world changes. Globalization, automation, and financialization have decimated American manufacturing.

By extension, they’ve decimated the American middle class. If you’re educated and lucky, you might get a job working for Google, Facebook, Apple, or one of the elite tech companies.

But these jobs aren’t numerous enough to build a middle class on, which is why you get protesters in San Francisco throwing scooters in front of chartered buses for tech workers.

None of that is good for society. And it explains some of the underlying tensions in the economy and American politics.

If the majority of the working-age population feels like they can’t chase the American Dream without amassing huge amounts of debt, then the American Dream is dead for them. The numbers show that it’s already in intensive care. According to the Fed report:

These numbers paint a grim view of the U.S. economy, despite the positive employment data. Something is wrong beneath the surface.

The Swiss’ Radical Experiment
Readers of The Bill Bonner Letter and Inner Circle will already know that on Sunday, the Swiss will go to the polls to vote on a radical change to their banking system. It could mean the Swiss government gaining complete control of its citizens’ money… and the end of banking as we know it.

Apple’s Race to $1 Trillion
Silicon Valley giant Apple is on the cusp of being the first company with a $1 trillion market cap. Is Apple’s ascension to $1 trillion “unbelievable” or preordained?

The One Commodity That Needs to Be in Your Portfolio
David Forest, Casey Research’s globetrotting geologist, has made it his life’s work to find the best resource plays for investors. Now, he’s saying that this one commodity will deliver life-changing gains over the next two years.

In the mailbag, Bill’s examination of how the Swamp really works draws response…

This is why The Donald is president. He told us that he could accomplish the impossible by draining the swamp. That’s not going to happen, even in our wildest dreams. He will be controlled just like every other president since the beginning of our great nation. The joke is that the Deep State doesn’t even need to control him; they control the money.

Mayer Rothschild said it wisely, “Permit me to issue and control the money of a nation, and I care not who writes the laws.” And his family is one of the few owners of most of the central banks in the world.

Hey, Trump is one of the stars of the largest reality TV shows ever. We can’t change anything, so just sit back and watch the show. Spoiler alert: It’s not going to end well for any of us.

I have to admit, this is the best, most comprehensive look at our swamp that I have read in a long time. And it’s about time. You have my attention!

Regarding Elon Musk and Tesla: Yes, Bill, I agree that he is a bit of a parasite in corralling all those tax incentives. I can’t keep up with which ones are still on and which are off. He seems to have put his finger on what the government thinks it needs him to develop for our future. Master salesman or con man? It’s hard to tell at times where his brilliance lies. It seems we must give him his due, in any case.

I must agree with most things you write. We ought to have a flat tax: 10% on all income, period. No deductions. Figure out a way to help those who really need help. Every industry and profession goes through some sort of turmoil from time to time. It is time for the accountants and tax lawyers to go through theirs. A pox on them.

Also, we would miss a few excellent folks in the House and Senate, but it is not worth the risk. Term limits: no more McCains, Pelosis, Schumers, etc. They have stolen enough. The sanctimonious Senate and House leaders need to go back and live among their people. In fact, year-round sessions make no sense. Two to four months per year should be sufficient. All should be required to be in their home districts/states for six months each year, and lobbyists should be barred for at least two months. They need to hear from the taxpayers – the voters. Keep writing.

A few months ago, behind closed doors, a high profile Wall Street broker gave a presentation to our company…

We can’t reveal his name or where he worked at this time. But what he presented that day stunned the crowd. In his own words, “It’s as close to insider trading as you can legally get.”

To hear this “Billionaire Broker’s” secret for yourself, go right here. 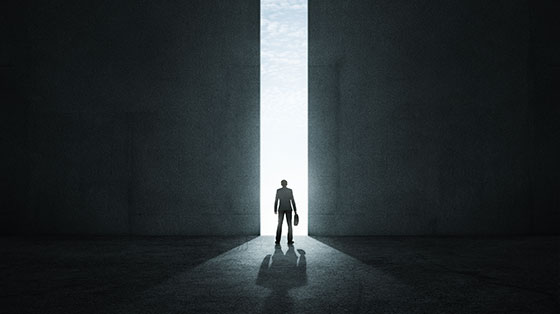