What I’ve learned at the Federal Reserve is a new language which is called “Fed speak.” You soon learn to mumble with great incoherence.

DUBLIN – Alan Greenspan is alive and well. Aged 92, he was on TV yesterday telling viewers that “unless they get control of the debt,” there will be hell to pay.

Greenspan is one of the most interesting characters in modern economics. And, unlike his successors, Bernanke and Yellen, he is not just an academic simpleton. He once had a very clear idea of how economies work. He saw the critical role of gold, for example, and warned that removing it from the U.S. monetary system would lead to trouble.

This is the shabby secret of the welfare statists’ tirades against gold. Deficit spending is simply a scheme for the confiscation of wealth. Gold stands in the way of this insidious process. It stands as a protector of property rights. If one grasps this, one has no difficulty in understanding the statists’ antagonism toward the gold standard.

We invited him to our office in Baltimore in late 2016. We wanted to see if he still had his head screwed on straight. But it was hard to know. Wiley and elusive, Mr. Greenspan resisted direct questions.

Back in the 1970s, Mr. Greenspan’s career took an amazing turn. He must have seen that fame, fortune, and status rarely keep company with a clear-headed, honest economist.

A true economist is an observer of human folly with a sly grin on his face, an ironicist with an empty pocket. He is not a politician, a functionary, a world improver, a booster, a salesman, or a demand manager. And he’s certainly not a miracle worker.

Mr. Greenspan wanted what a true economist couldn’t get – his face on the cover of TIME… and Andrea Mitchell. He knew he couldn’t get either by telling the truth. So he mumbled.

But the old fox wasn’t mumbling yesterday. He warned that we will see rising rates and rising unemployment. “Stagflation,” in other words.

You’re getting into a system now that has no outcome that’s in equilibrium other than inflation and no productivity growth.

Agence France-Presse has confirmation, at least of the “flation” part:

U.S. consumer inflation got a bump in October, as prices for gasoline and electricity shot up, rising along with the cost of shelter and medical care, the government reported Wednesday. The increase in overall consumer prices was the largest in nine months.

Also in the news was this observation from The Washington Post, confirming the “stag” part:

Cost of living was up 2.9 percent from July 2017 to July 2018, the Labor Department reported Friday, an inflation rate that outstripped a 2.7 percent increase in wages over the same period. The average U.S. “real wage,” a federal measure of pay that takes inflation into account, fell to $10.76 an hour last month, 2 cents down from where it was a year ago.

The stagnation in pay defies U.S. growth, which has increased in the past year and topped 4 percent in the second quarter of 2018 – the highest rate since mid-2014.

You may recall that “stagflation” was thought to be impossible. The Phillips Curve suggested that inflation drove employment. That’s why the feds pursue a 2% inflation target rather than a 0% inflation target.

They think the extra money adds to consumer demand… which then puts people to work producing things to sell.

All nonsense, of course. “Products are bought with products,” not with money alone, said the great 19th-century French economist, Jean-Baptiste Say.

He was describing the real world… the win-win world. If you want something, you’ve got to give something in return. Which means you have to produce something to give – and not just a piece of paper with green ink on it.

But the real métier of most modern economists is not merely telling soothing and incoherent lies; it’s preventing people from seeing the truth.

Rose-colored glasses are not enough. They go for the eyes… with sharp objects, absurd theories, and outrageous lies.

They tell people they can get richer by hocus pocus – increasing the money supply, lowering the interest rate, manipulating statistics, or stealing from future generations by racking up obscene levels of debt.

“No… there is no chance,” we heard him say. “You get a little ‘bounce’ at the beginning, but that is just about over. After that, a tax cut makes no sense unless you are willing to ‘fund’ it… that is, to cut spending.”

“You can’t get something for nothing,” he might have said, providing a handy epithet for the whole Fin de Bubble Age.

An unfunded tax cut is just a hustle, shifting the burden of government boondoggles from the current taxpayers to the taxpayers of tomorrow. The money (the product!) has to come from somewhere.

Since our own outlook aligns nicely with that of the former Fed chief, aka Alan “Bubbles” Greenspan, we presume we are both wrong. But you never know.

As Bill has written, large-cap indexes like the S&P 500 have fallen hard in recent weeks.

That’s the story of today’s chart, which maps the Russell 2000 “small-cap” index – which tracks a basket of roughly 2,000 small-cap stocks – over the past 12 months. 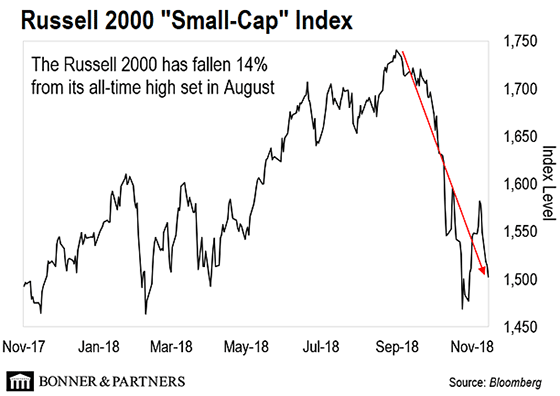 This is another sign that the current bull market is nearing its end. While small-cap stocks are often high-flyers during bull markets, they usually underperform during bear markets because they are seen as riskier than more-established large-cap companies. Thus, professional investors tend to pull out of small-caps first when they see a potential downturn on the horizon.

What’s more, many consider the Russell 2000 to be an important bellwether of the U.S. economy because it measures the performance of small, domestically focused businesses.

That makes the Russell 2000 an index to keep on our radar in the coming months. If small-caps catch a bid, that means the bull has a little further to run. But if small-caps continue to struggle, that’s a good sign that the bear approaches…

The Next GE
General Electric was once a titan of American industry. Now? Not so much… The company was kicked out of the Dow Jones in June as its share price plummeted. The problem? Too much debt. Too many bad investments. But GE isn’t the only company with these problems…

The Assassination of Bitcoin?
Bitcoin, the world’s first cryptocurrency, gives users a supply of money outside the control of government. According to the International Monetary Fund (IMF) that’s a problem. The global institution is considering taking a dramatic step: launching their own cryptocurrency.

Why You Should Own Fewer Stocks… And Hold Them Forever
Most dear readers are looking for ways to be better investors. In this essay, Chris Mayer, one of Bill’s ace stock pickers, reveals one of the best ways to get rich from stocks: buy fewer of them… then forget you ever did.

Today, a mixed mailbag: Trump… the theft of the working man’s time… and how much is $1 trillion anyway?

Your perception of our president’s accomplishments to date will have no value. The real legacy will focus on accomplishments, not on perception and negativity. The system of pay-to-play for both parties and special-interest heavyweights that control the decisions made by both parties was exposed. President Trump’s motivation is based on truth and common sense. He owes and gives nothing to those that oppose honesty. Where were you during the self-serving corruption of the Clinton/Obama years?

What do you expect President Trump to do? Give in to China as President Obama did, and lose all the manufacturing plants in this country? I am tired of purchasing almost everything you can think of buying for our family and finding it is made in China. They are stealing our technology and using it against us. Calling President Trump a blowhard and a dumbbell is not appropriate, unless you think you could do so much better. Until you are in his position, you truly do not know what you don’t know. I have worked in other parts of the world, including Russia. Our fear needs to be of China.

Hi Bill, I greatly enjoy your writing and marvel at how you are able to connect the dots. I believe that anyone who talks debt, taxes, or anything that has to do with the U.S. economy should have a standard disclosure of how big one trillion really is. According to Google, one trillion seconds equates to 31,709 calendar years. Therefore a $21 trillion deficit translates to 665,889 years. That’s a really big number.

And no… it’s not a new type of ATM, voting machine, or bitcoin exchange station. Rather, it’s part of something we call “The Greatest Day in Stock Market History”…

You can get the full story here. 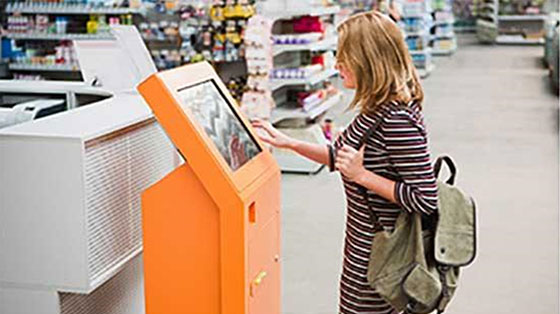