BALTIMORE – We owe Donald Trump a hearty and sincere “thank you.”

Not only did he save us a lot of money (see below)… but he also helped us better understand how government actually works.

What “The Donald” understood better than the professional politicians was that democratic politics is basically a form of entertainment.

It’s a sordid part of show biz – all hocus pocus… suspension of disbelief… and performance art – closer to nude mud wrestling than The Crown.

The press still doesn’t get it.

In an article that appeared in The Washington Post on Tuesday, reporters had tallied 1,950 “false or misleading claims” the president made last year.

We were surprised; we thought he had made more than that. And why not?

No one expects a standup comic to tell the truth. No one checks Beyoncé’s lyrics for factual errors. And who worries about accuracy while watching Buffy the Vampire Slayer?

Another article tells us that Trump is “mocked on social media for bragging” about his nuclear button.

Of course, that’s not what President Eisenhower would have done. But these are not Ike voters. And this is not Ike’s Old Republic.

Today’s voters have lost faith in the system, with its solemn deceit and its counterfeit dignity. And they’re happy to hear someone speaking in a language they understand – the lowbrow media patois of Howard Stern, the Kardashians, and “The Big Dog” himself, WWE champ Roman Reigns.

Trump, a lifelong celebrity, sensed that the role of president has little to do with geopolitical facts, mastery of the federal budget, or knowledge of history.

It’s more like a reality TV show or a WWE wrestling match – with put downs… posturing… and fake fights.

In other words, it was right up his alley.

Deal of a Lifetime

Mr. Trump understood, too, that the real task of government – bossing people around and ripping them off – is done by the Deep State, the cronies, the elite, and the lifers in D.C.

He knew he couldn’t beat them. All he could do was make the deal of his lifetime – allowing him to pretend to be the Champion of the Common Man of Flyover America…

…while not rocking the insiders’ boat.

A year later, the boondoggles continue at home. The phony wars continue overseas. And it’s all still funded by a fake-money system.

Another thing Mr. Trump understood was that the “fans” – the voters – were fed up.

He guessed they would flock to a candidate who seemed to talk straight… pledged to stop losing wars… and promised protection from foreigners with walls, torture, and trade barriers.

The pros – too circumspect and timid to stoop to this kind of rabble rousing – no longer got them excited.

They wanted someone to “tell it like it is”… They wanted a brazen liar who wasn’t afraid to tell the truth: that the system was rigged against them… and that the riggers filled the Capitol, the government bureaucracies, Wall Street, the media, and big business, too.

Trump was right on all counts.

The president probably still doesn’t understand how it is rigged. But he has the knack of a showman… an instinct for mob psychology… and a well-developed skill at crowd manipulation.

Posing as a friend of the little guy, Mr. Trump proved to be the perfect big guy president – cutting taxes for the big guys on Wall Street… increasing spending for the big boys in the Pentagon and its industry cronies… helping to stifle real reform of runaway entitlements… teaming up with Pelosi and Schumer to keep the debt ceiling going up with no limit on deficits.

And everybody has a part to play. Even the liberal media has a role: guardian of democracy’s faux virtue.

The press pretends to be after the president for plotting with the Russians to defeat Hillary.

Every day, it bangs the drum of “Russiagate,” knowing full well there is nothing there worth investigating.

The feds spend $75 billion a year keeping track of “enemies” and “dissidents.” If there were any fire in the Trump camp, and the insiders really wanted to be rid of the blond bombshell, the smoke would be stinging our eyes by now.

But never was feigned outrage so profitable. The media never had it so good. People tune in every day just to hear what dumb, outlandish, absurd, or pathetic thing the president will do next. The media love him; they know he’s always had good ratings.

The Deep State loves him; they know his mock combat is protecting their scam.

The rich love him; he’s continuing to shovel money in their direction.

The poor love him; they like the way he talks… and they lack the necessary cynicism to understand what is really going on.

The insiders – at least those who understand the game – love him; he keeps the fake money flowing their way.

And the outsiders love him, too; they think he’s on their team!

And most of all… we love him. Here at the Diary, that is. Over the holidays, we got a note from our chief financial officer. He calculated that the GOP tax cuts would shave our tax bill by 22%.

So we are grateful to The Donald for the money, but also for making 2017 an entertaining and instructive year.

More than any candidate before him, he showed us what a greasy and disgraceful business government really is.

And for all his glaring faults and shortcomings… Mr. Trump is still right: The system is rigged.

Further Reading: It’s not just in Washington… The Deep State has influence over almost every aspect of American life, from the food you eat to the lessons your children and grandchildren are taught in school.

But what is the Deep State? And how did it become so powerful? Bill answers these questions right here.

MARKET INSIGHT: THE MARIJUANA INDUSTRY IS READY TO TAKE OFF

On Monday, recreational marijuana went on sale in California, the world’s sixth-largest economy.

That alone is huge news for investors in legal marijuana, but it’s still just the start. In fact, I think complete legalization of marijuana in the U.S. is now inevitable.

You might find that hard to believe. After all, the U.S. federal government still classifies marijuana as a Schedule 1 drug. In other words, the feds consider marijuana as dangerous as cocaine or meth.

That’s completely absurd. And public opinion is starting to reflect that.

According to a recent Gallup poll, 64% of Americans say cannabis should be totally legal. That’s the highest level of support since polling on this issue started 48 years ago. 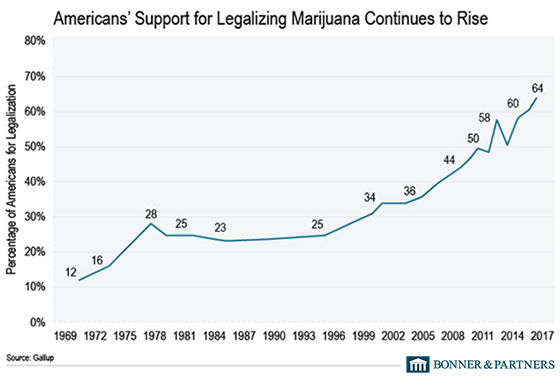 Today, opposition to legalization has dropped to an all-time low of just 34%.

Meanwhile, support has more than doubled since 2000. And, as you can see in the chart above, it’s continuing to grow.

Support for the legalization of marijuana in the U.S. has never been higher. And as more states like California, Colorado, Oregon, and Washington continue to legalize pot on a state level, federal legalization will become impossible to avoid.

Even if you’re not a supporter of legal marijuana, this is still a trend that should be on every investor’s radar.

The global marijuana market is enormous. The United Nations estimates it to be worth around $150 billion annually.

To put that figure in perspective, the marijuana market is about nine times larger than the silver market. It’s also larger than the iron, copper, aluminum, coffee, corn, and wheat markets.

You can see how these commodity markets stack up in the chart below. 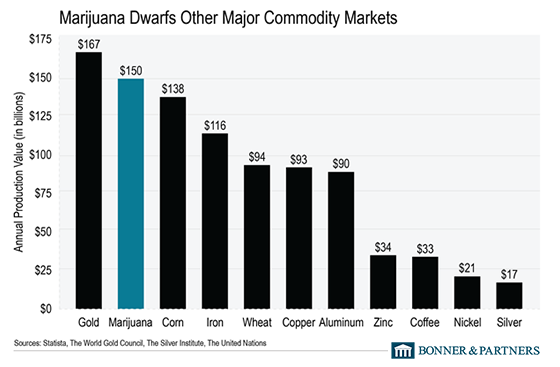 For decades, prohibition has funneled hundreds of billions of dollars in cannabis profits to drug lords, corrupt government officials, and thugs.

But those days are numbered…

Widespread marijuana legalization is inevitable. It’s happening. And it’s unleashing a $150 billion market that was once underground.

Those profits are up for grabs.

In the coming months, I think many investors will make life-changing fortunes as the marijuana market steps into the light.

P.S. Next week, I’ll be hosting a free webinar with legendary speculator Doug Casey that shows you how to join the party for the “second” marijuana boom. We’re calling this event the New Marijuana Millionaire Summit.

During the summit, we’ll share details on how anyone can position themselves into the future “Amazon” and “Home Depot” of the legal pot industry. Click here to reserve your spot.

The Calm Market Is an Illusion
U.S. stocks just had one of their most successful years in history. The S&P 500 went all of 2017 without a down month. But this market tranquility may be an illusion. In the background, the risks are mounting…

An Unseen Effect of the Tax Overhaul
The GOP’s tax overhaul is now the law of the land. As Bill mentioned above, people and businesses are finding out what it means for them. And that includes the Federal Reserve.

How Big Tech Hijacked Your Mind
The five largest companies in America are now all technology companies. These corporations are supposed to make our lives easier and more efficient. But Bill Bonner Letter coauthor Dan Denning says there’s another side to big tech that we’re not seeing…

In the mailbag, Bill’s essay “How the Feds Robbed the Working Stiff,” has gotten some readers thinking…

Correct me if I am wrong. The banksters’ game is to fleece the USA of its gold through interest payments on the debt. If this is the case, the first point where the system will come under stress will be when the interest payments exceed available gold payments. In theory, they will have accomplished their goal. They can, of course, keep the game going indefinitely. Based on this, when does the USA run out of the ability to service the debt?

This doesn’t hold true when examining the value in advancement and development. For example, imagine a society where everyone lives in straw huts and has to make a half-day’s journey to get a bucket of water every day, so there is little time to farm or build more straw huts. One person figures out how to dig a well one day, and everyone gives him/her a bit of food to use the well. Everyone now has an extra half-day to go cut lumber, farm more food, and build better structures. Now we see that wealth is not capped; it’s not zero sum. It can be created through advancement and development. I’d love to talk more about this and hear your thoughts.

Over 40 years, I have spent less than I earned. I found investments that were safe. Here is where I am at financially: I have about $200,000 in retirement funds. I have two houses, one of which I will sell when I retire in about two years. I have a little bit in silver (you know, poor man’s gold) and am trying to squeeze out a bit more for more silver.

I am far from a rich man, having earned about the average wage all my career. But when I consider where so many are at my age (63), with that $12,000 in retirement savings and a house with a mortgage on it, I feel I am in okay shape. I am debt-free and God has blessed me with enough so that my needs are met and little enough so that I sleep well at night. This is just an illustration that demonstrates the principles you lay out in your Diary. Simple and few though they are, they are sound and will generally work if consistently applied over the long haul.

As Nick Giambruno mentioned above, California just legalized recreational marijuana. And that will likely usher in a new wave of legalization.

Next week, Nick and legendary speculator Doug Casey are hosting an online investing summit to take advantage of this rare opportunity. Reserve your spot right here. 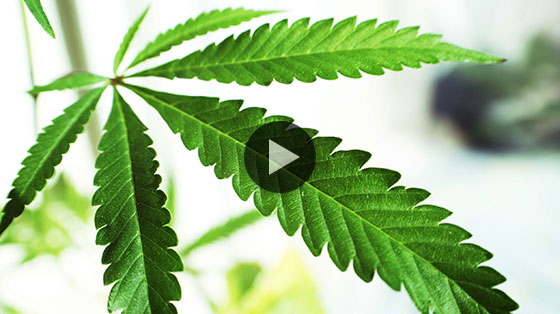