Our dark fears and midnight tremors are coming to life. In the broad daylight.

The Bolsheviks are invading the suburbs and cities… and even the Corn Belt… all across America.

Both Democrats and Republicans are turning to three-part programs – one part Soviet economic claptrap, one part Mussolini’s political bamboozle, and one part pure American jackassery.

Today, we begin the hard work of giving them the mockery they deserve. We only worry that we will run out of scorn and sarcasm before we are finished.

Many will want to blame Donald Trump. It was he who brought politics front and center in economics, trade, immigration, and monetary policy.

Rarely had a U.S. president intervened so directly in the affairs of ordinary businesses and consumers.

He cut taxes for some… and raised them for others. He started trade wars with Canada, Europe, Mexico, and China; on his own say-so, he raised prices on imports for all Americans.

The Fed is supposed to be independent of politics, but the president told Jay Powell to stop “normalizing” rates… and the Fed obeyed. And this past weekend, he went further, suggesting that even farming should be brought under his control.

The soggy Corn Belt must have felt a ray of sunshine on Saturday as it learned that the U.S. president had made a great deal on behalf of our “patriot farmers” with Mexico.

How the president got in the business of selling corn, we don’t know. Nor do we know why farmers are any more patriotic than plumbers or insurance salesmen.

Perhaps it is because they provide us with food to eat? But what kind of patriot takes food away from Americans and sells it to foreigners at a higher price? And what kind of president willfully raises food prices?

Every penny the farmers get in extra income by selling to foreigners, the natives will pay in higher food prices. How is the nation better off?

Who cares? It’s about power, not economics.

In the Soviet Union, Stalin went so far as to dictate how land would be farmed (collectivism) and how and when the seeds should be planted (Lysenkoism).

Attracted to the nutty theories of agronomist Trofim Lysenko, Stalin had the farmers converting winter wheat to spring wheat by planting soaked seeds directly in the snow cover. Sometimes it worked. Often it didn’t. But Stalin never went hungry.

Trump has his crackpots, too – notably his top man on trade, Peter Navarro – from whom he has drawn inspiration and quackery. Navarro encouraged the president to go to battle with the Chinese.

But on Monday, speaking to CNBC, Trump admired his adversary:

Don’t forget, the head of the Fed in China is President Xi. He’s the president of China. […] He can do whatever he wants. They devalue, they loosen or you would just say they pump a lot of money into China, and it nullifies to an extent, not fully, it nullifies the tariffs.

How would a president know when to “devalue” the people’s money… or when to loosen monetary policy? How would anyone know?

But one constant feature of the politicized economy is a lack of question marks. Politicians have no idea how an economy works and don’t really care. And the more control they have, the poorer people become.

Man With the Plan

But politically, in a late, degenerate empire, the “man with the plan” grows bolder.

For nearly half a century, the feds have twisted and corrupted the economy… with fake money and fake price signals (mostly interest rates).

This has nurtured a grotesque, disfigured capitalism where the average American hasn’t had a raise in 45 years… but where the rich and powerful have gained approximately $50 trillion of illegitimate wealth (our estimate).

This corrupted elite now dominates the White House, Congress, the bureaucracy, the universities, the military, the press, and major industries. And they use their influence to make sure real capitalism is suppressed.

Managers discover that it is safer and more profitable to borrow money and buy their own stock than to undertake risky, long-term new ventures.

Kids discover that it is better to stay in school with more and more student debt than to venture out in the real world and have to pay it.

And old people realize that they want the feds to protect them from everything – disease, poverty, infirmity, terrorism, Mexicans, and BMWs – and life expectancies fall.

GDP growth rates have sunk to just half of what they were in the last century. Savings rates are near all-time lows, too, as savers are systematically penalized with low rates and inflation.

And debt grows twice as fast as output… with no end in sight, dooming the whole system to a catastrophic collapse.

Cometh the hour… cometh the numbskull.

And here cometh Elizabeth Warren, with her own bombs and BS… promising to out-Trump Trump.

U.S. Treasuries are now warning us of a recession…

That’s the story of today’s chart, which maps U.S. Treasury rates for short-term and long-term Treasuries. These are fixed-income securities that are issued and guaranteed by the U.S. government.

Remember, a bond’s interest rate moves opposite its price. So, when investors pour into a specific bond, it drives the price higher and the interest rate lower.

But when investors see greater risk in the near-term, they avoid short-term Treasuries even as longer-term yields fall. That leads to short-term rates rising above long-term rates.

That’s called an inverted yield curve… And it’s a telltale sign of a recession. 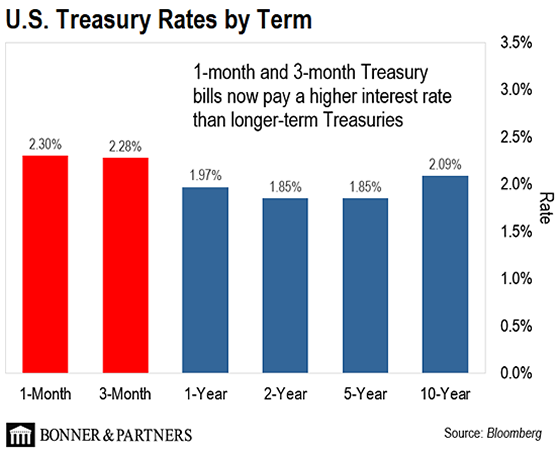 As you can see, 1-month and 3-month Treasury bills now pay a higher interest rate than longer-term Treasuries… even including the 10-year note.

That tells us investors are flocking to longer-term Treasuries, and avoiding short-term options… even though the short-term bills have better rates.

And that means investors see unusual risk in the short term… which only happens when a recession is on the way.

We have seen the yield curve invert two times in the last 20 years, in 2000 and 2006… And the U.S. was in a full-blown recession shortly after on both occasions.

Shining a Light on “Shadow Banking”
While banks are pulling back on risky loans, other lenders, called “shadow banks,” aren’t following their lead. They’re companies that focus on giving loans to borrowers already in debt. And while the business is growing, experts are comparing it to the subprime mortgage situation in 2008…

Trade War Spurs China to Focus on Gold
China fears the trade war isn’t ending soon, forcing it to shift its strategy. The country has started buying gold again. And it hopes that will reduce its dependence on the dollar.

The Technology of Chaos
Superpowered humans? Editing DNA? Bringing someone back from the dead? These ideas sound like science fiction. But they won’t be much longer. We’re on the verge of game-changing technologies that will alter our way of life. They’ll allow us to solve society’s problems… or throw us into chaos.

Today, a reader questions whether win-win deals are as simple as we thought, using an example of their own…

If a deal is good for me and my counterparty, I don’t care what it does to others. An addict and a drug dealer make a win-win deal. Unchecked capitalism creates monopolies or no protection for intellectual property. Google, Facebook, and Twitter already show us what that looks like, as anti-monopoly policies don’t apply to them.

We’re on the verge of the biggest inflection point in human history. The technology in development today will transform our society in ways we can’t imagine.

And tomorrow night, at 8 p.m. ET, Bill’s go-to tech expert, Jeff Brown, is giving you the chance to learn the names of these stocks. He’ll also reveal his top four predictions for the tech of tomorrow. And he’ll give you the name of his favorite early stage tech company, live on camera. 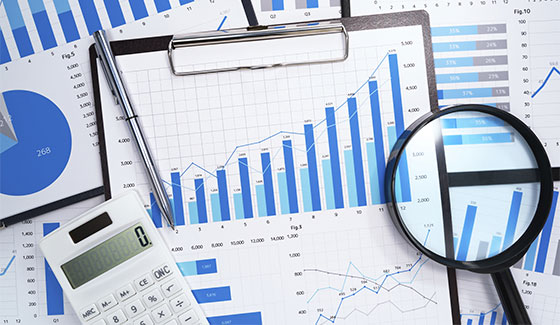