BALTIMORE – It is always brightest before they turn the lights out.

You can quote us on that, Dear Reader.

Just when you thought things couldn’t get better… guess what?

They don’t. They go dark as a dungeon.

Our task today and tomorrow is to show that however wonderful things may appear in today’s markets and economy, they may not be all that great.

We put our backs into this grim work neither for love nor for money, but simply out of a sense of stern duty.

Someone must put forward an antidote to the optimism now raging through markets around the world.

Someone must make the case for cynicism, suspicion, and mockery.

Someone must take the other side of the trade.

And so… the work, like shucking oysters on a cold day, falls to us. We open them up… hoping to find a pearl.

Instead, we find claptrap.

“The elite gathering at Davos [including Donald Trump],” begins a Financial Times article, “takes place against a backdrop of improving economic activity across the world.”

The IMF says it is the “broadest synchronized global growth upswing since 2010.”

The FT goes on to tell us that the world economy is supposed to grow a healthy 3.9% “this year and next” thanks, at least in part, to the sweeping tax reform measure just implemented in the U.S.

Well, well, well. Gosh, it looks as though we were wrong about everything. You can predict the future after all.

As for the tax cut, we didn’t believe that the tax measure would have any positive consequences other than giving us more money.

What economic benefit could be reaped by taking money from one pocket and putting it in another?

Unless Swamp spending were reduced, we reasoned, there could be no net gain from cutting taxes.

Just goes to show what we know.

Over at The Wall Street Journal, meanwhile, the tax cut has touched off celebrations worthy of VE Day.

Andy Puzder, the former CEO of the Hardee’s and Carl’s Jr. restaurant chains, praises employers for sharing out their extra tax-spared loot with employees.

He also thinks employers should use the opportunity to indoctrinate workers about where the money came from, “otherwise employees may take their pay increase and bonus and not give Republicans the credit they deserve.”

What praise Republicans deserve for switching government funding from above-board tax revenues to surreptitious debt is not clear to your editor.

But now that we know that it is creating such a powerful, worldwide boom, we wonder why they don’t do more of it.

Perhaps they should cut taxes to zero for everyone and just print the money needed to pay for their boondoggles. What a boom that would set off!

Whatever they are doing… it seems to be working.

The U.S. stock market has only been down one single day in all of 2018. And super hedge fund investor Ray Dalio says we’re “going to feel pretty stupid” if we continue to hold cash.

Reporters caught up with Dalio in Davos – where else? – and the great man told them we are in a “Goldilocks period,” where growth is almost guaranteed.

“Things couldn’t be better,” he seemed to say.

Heck, nobody wants to be stupid. So, everyone’s long now. In the latest tally, there are five bulls for every one bear. How much longer can this poor beast hold out?

In some states, it is at a record low. In Mississippi, for example. And California. And in Hawaii, apparently, not a single person could be found who admitted to being jobless.

These glass-half-full figures don’t jibe with the 102 million American adults of working age who really don’t have jobs.

But perhaps in some future installment, the Bureau of Labor Statistics will fully explain the discrepancy… or simply ignore it along with all the rest of the glass-half-empty figures.

Inflation is still below 2%… but only if you follow the feds’ bogus numbers… and don’t count the rampant inflation in the asset markets.

And the stock market, too, requires a special caveat emptor. It is no longer a place where we find out how much companies are worth.

Instead, it is part of a wealth redistribution system: The feds feed fake money into the markets. Assets go up. And the people who own them find themselves with a greater share of the nation’s wealth.

Congrats to the “One Percent”

By pushing fake money onto the financial class, the feds have increased the share of national income made by the “One Percent” to three times what it was in the 1970s.

But the bottom half of the population has an average income of only $16,000. And seven out of 10 Americans, says USA Today, have less than $1,000 in savings.

How is it possible that an economy can be doing so well… when most people in it are worse off?

Casual readers will quickly tag us as bleeding-heart liberals whining about inequality. But we don’t care about “inequality.” What we care about is truth, justice, and the American way.

Which is to say, if a person earns his money honestly, it should be a rough measure of what he deserves. Or at least what other people are willing to pay him.

In a free, win-win world, what you get is related to – if not exactly equal to – what you give.

What are the rich giving to deserve twice the income share? Are they giving twice as much?

What happened? Do they give so much less? Or is the system rigged against them?

Tune in tomorrow for our look at America’s Depressed Counties. (There are more of them than you think.) 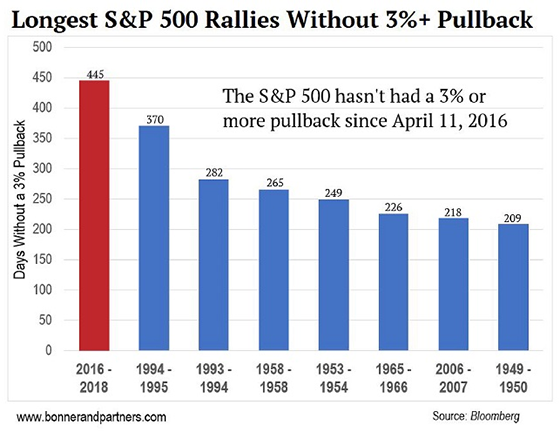 As you can see from today’s chart, at 445 days and counting, that’s the longest ever winning streak.

It handily beats the second-longest streak – the 370 days without a 3% or more pullback that ran between August 1994 and December 1995.

Prepare for Economic War
A U.S. Treasury report is due out in a few days. The report could lead to more sanctions against Russian banks. If that happens, one Russian bank says it would be “economic war.”

More Trouble for GE
It was only yesterday when Bill outlined General Electric’s fall from grace. And now, there’s another hurdle for the embattled corporation: an SEC probe.

Why 99% of Investors Don’t Understand Cryptocurrencies
Cryptocurrencies and bitcoin continue to fascinate the investing world. But Jeff Brown, Bill’s top technology analyst, says most of these investors are missing one crucial detail…

In the mailbag, readers weigh in on GE’s fall from grace…

Why did you not think Jeff Immelt merited condemnation in your Diary? From the moment Immelt took the reins of GE, the company went to H-E-double-hockey-sticks. Times change; conditions change. A well-run business remains flexible to adjust to these changes.

Immelt was totally unprepared to run any company, as far as I could tell. Additionally, he managed to reduce GE’s quality of products to almost zero. I’d cut Jack Welch some slack since he had zero control once he retired.

How did we get to fake news even by financial news outlets? Believe nothing you just heard and use your brain and common sense. Then, act like the news was just the opposite.

This is exciting stuff in the pike. The one fear I have is how quantum computing could render blockchain technology insecure. It seems like the ultimate threat to distributed ledger technology. I suspect folks are working on tech that will be quantum resistant?

Now, Bill has teamed up with Chris Mayer and Doug Casey to show readers how to profit from the ambitious trade. Details here. 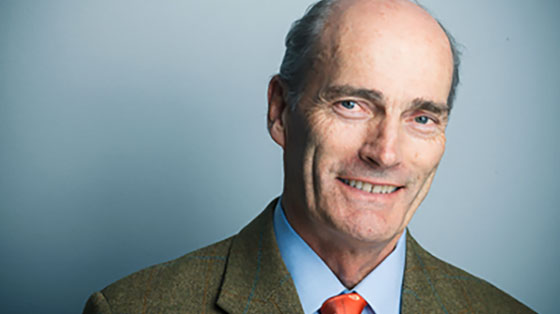