It’s a wonder you’ve managed to keep your business going with such a fervent Republican bias. Apparently, you don’t want to have Democrats among your members. I’ve just started and already I’m beginning to question why I bothered. I couldn’t care less what your private feelings are regarding politics, everyone is welcome to their own thoughts in that regard, but I sure don’t want that nonsense jammed down my throat. I find this most disappointing.

– A letter from a dear reader

– A letter from a dear reader

What we found refreshing about DJT was his willingness to say things that others won’t – often idiotic, but occasionally true.

He said the stock market, for example, was a “big fat ugly bubble.”

He said we needed to “drain the Swamp.”

But last night was all blah blah.

Since entering the White House, Mr. Trump has been partially, but not completely, tamed by the Deep State.

He no longer sees any evil in bubbly stock prices. He no longer hears any evil in the Pentagon’s overseas misadventures. And he no longer speaks up against evil coming from “the Swamp,” of which he is now, supposedly, master… and which has gotten about half a trillion dollars deeper over the last two years.

And his SOTU speech was so mealy-mouthed mainstream even Barack Obama could have delivered it.

As to today’s economy, he missed the point. Noting that it has added jobs for 100 straight months, he says “the only thing that can stop it are politics, foolish wars, and ridiculous partisan investigations.”

He is surely wrong about that.

Expansions always add jobs. This one has added fewer than usual. Then, at some point, the jobs stop coming… and the expansion stops.

No help or hurt from the feds is necessary. The feds can delay and distort market forces; they can’t stop them.

In this case, the feds have merely added more bad debt and bubbly asset prices in need of correcting to correct. So, when it comes… the correction will be deeper and longer than usual.

He also announced that “America will never be a socialist country.” That, too, is a bit of conceited claptrap. The country is already heavily socialized, with about half its output directly or indirectly controlled by the feds.

But you don’t expect honest insights in a SOTUS. The point is not to enlighten, but to obscure… and unify.

Like ancient exhortations, given around tribal campfires… or elegant discourses pronounced in the Roman Senate… it echoed the glories of past generations – there was moonwalker Buzz Aldrin in the gallery! – and called upon the assembly to put aside partisan squabbles, lock arms, and march into the future… together.

One of the most memorable – and most instructive – of these speeches was Pericles’ Funeral Oration during the Peloponnesian War. The great Greek leader recalled the sacrifices made by generations of Athenians… and urged those drawing breath to make more.

Most of these evening speeches are forgotten before the sun rises. But some lead to action.

In Pericles’ case, the war he supported ended with Athens’ complete defeat, with many of the young men killed and the rest of the population enslaved.

And today, the last thing America needs is what Mr. Trump says we need most – for the two parties to forget their differences and make common cause.

Gridlock, shutdowns, and investigations – the balance of stupidity is the only thing that stands between us and further calamity.

We predict that this happy disunity won’t last long. Because… in the “us vs. them” that really counts, both Republicans and Democrats are on the same side.

But we’ll come to that, tomorrow. In the meantime, let us work our way back to our theme this week.

We’ve seen that we have inherited software as well as hardware from our ancestors. The hardware is our brain. The software tells us what to do with it.

And one of the most ancient, most deeply etched parts of our software is the instinct to stand together. It’s “us vs. them.” Red or blue… black or white… Mexican or American… Protestant or Catholic…

…The “us” changes with the fashions. And the rules that govern human interaction evolve. But the instinct never goes away.

It’s why we care whether the Rams or the Patriots win the Super Bowl… or whether American troops or ISIS win a firefight in Syria.

It means nothing to us materially… or in any practical, identifiable way. But we care nevertheless.

And so, we choose our side… our party… our flag… our team. We are good; the other side is evil.

One of the things most annoying about our Diary is that we are neither Red nor Blue. As you can see from the comments above, we irritate both sides.

But who has a monopoly on truth or beauty? Republicans? Democrats? How about grace, dignity, or intelligence? Does either party have even a chemical trace of those?

Our instincts tell us to take sides. But which side? Like Groucho Marx, we are deeply suspicious of any club that would have us as a member. And more suspicious of the others.

We will take up the subject tomorrow.

Gold’s annual returns have beaten stocks, bonds, and other commodities over the past 20 years…

That’s the story of today’s chart, which maps the average annual returns for gold, U.S. stocks, U.S. bonds, and commodities going back to 1999. 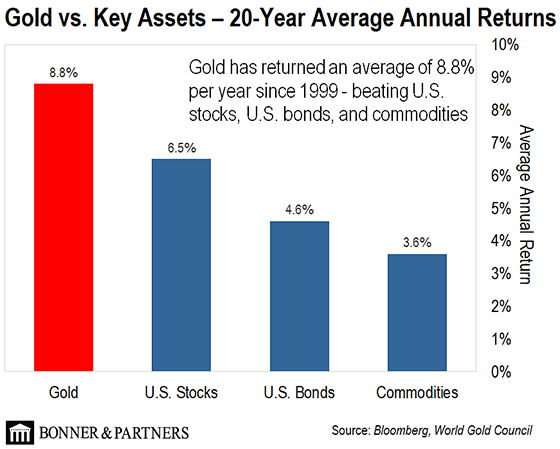 As you can see, gold has delivered an average of 8.8% per year going back to 1999. Compare that to an average annual return of 6.5% from U.S. stocks over the same time.

Gold is often considered just a safe-haven asset or chaos hedge… But this chart shows that its long-term returns are comparable to the world’s top asset classes as well.

In fact, a study done by the World Gold Council showed that a 5-10% allocation to gold within a traditional investment portfolio would have produced risk-adjusted returns of 9% per year over the last 20 years.

As Bill wrote recently, his “Grand Strategic Plan” for investing is to keep it simple and keep it safe.

By adding some gold to your portfolio, you tick both those boxes.

How Big Tech Knows What You’re Thinking
Recently, a bug was uncovered with Apple’s iPhone. Conversations on the company’s FaceTime feature could be eavesdropped on without your knowledge. Privacy advocates were up in arms. But they missed the bigger picture. Big Tech companies don’t want to eavesdrop on you. They don’t have to…

Can Anything Hurt Big Tech?
Companies like Facebook have been embroiled in scandal after scandal for more than a year. But it doesn’t seem to matter. The company just posted record earnings. Bad press doesn’t seem to harm the Silicon Valley giant. But politics might…

In the mailbag, dear readers continue to respond to a variety of topics: Alexandria Ocasio-Cortez… why Trump can’t “drain the Swamp”… and Bill’s new house is a real “handyman special.”

I am gratified by the range of comments you get. Because you have humanitarian and fair-minded instincts (not always evident in those in the financial advice world!), you allow discussion. I am disheartened by those who dispute the knee-jerk conservative reactions to social welfare and those like Ocasio-Cortez who advocate fairness and a return to some of those old (and they are old) values of caring for your neighbor. Socialism can go wrong, undoubtedly.

Absolute power corrupts all Right or Left as we know… but a decent degree of social welfare, free education, and free health care are powerful indicators of real civilization. I speak as someone from the UK, and to try and tell us the National Health Service is not a huge benefit to our society would find you very few supporters from the ilk of the capitalist fundamentalists of the Heritage Foundation. We have had it since 1945, and will, I assure you, never give it up!

Hi Bill, I believe the rich vs. poor argument will intensify in the next few years. Trump was voted in mostly to “drain the Swamp.” Main Street didn’t understand that this was an impossibility. And as we round the corner to the next election, in a full-blown recession, the Dems will regain control and tax us into a full-blown depression. It’s a joke to think they will increase tax revenue by taxing the rich. Remember the 90% top rate in the 1970s? The rich will take their money and leave, or place it off-shore in trusts and corporations, the way they have for the past 100 years. It’s a no-win, and huge loss, for Main Street.

[Vladimir] Putin has his opponents murdered or jailed. Yet you think he’s more honorable than our average congressman. Give me a break. Do you read what he’s done? He is a former KGB member. He wants to build up Russia at our expense. Open your eyes to what he is doing.

Mr. Bonner, I had a look at the recent posted photo of your “home” under construction. As a realtor, I’d say it gives a new meaning to “Handyman Special.” As a shrewd investor in other financial markets, you sure don’t know real estate values. I expect you will be “upside down,” or as they now say, “underwater,” when all the accounting is completed for this project. I hope you prove me wrong.

Have you heard of the “Digital Treasure Map”?

It’s a proprietary satellite technology that can spot untapped gold mines all the way from space!

Obviously, this has been kept very hush-hush… until now.

Be the first to get the full story, and see how you could make a small fortune in the process, right here. 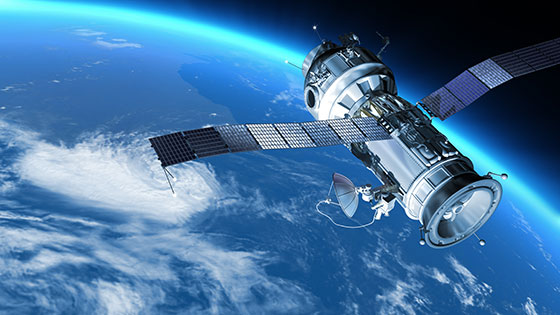