YOUGHAL, IRELAND – The show is Donald Trump. And it plays to sold-out audiences, 24/7.

Meanwhile, in the back of the crowd, the Deep State goes about its work – picking pockets.

The political world thus unchanged… we move back to the financial world.

Stocks fell on Thursday amid criticism of the Federal Reserve by President Donald Trump.

In a stinging and historically rare criticism, Donald Trump expressed frustration with the Federal Reserve and said the central bank could disrupt the economic recovery.

Fed officials, including Chairman Jerome Powell, have raised interest rates twice this year and have pointed to two more before the end of 2018.

Trump, in an interview with CNBC, said he does not approve, even though he said he “put a very good man in” at the Fed in Powell.

“I’m not thrilled…” said the man who once described himself as “the king of debt” and a “low interest” guy.

Donald Trump is the last person who wants to see interest rates go up. Not only does his personal business empire depend on low rates… so does his political empire.

Per The Wall Street Journal:

The Trump administration expects the annual budget deficits to rise nearly $100 billion more than previously forecast in each of the next three years, pushing the federal deficit above $1 trillion starting next year.

Well, well… Who saw that coming?

Larry Kudlow, Trump’s top economic advisor, said the tax cuts were going to light a fire under the U.S. economy. It would be a “supply-side” boost, he said.

This would decrease the size of deficits, he forecast. Don’t worry about the debt, he assured us.

But you can do the calculation yourself: Lower tax receipts (because of the tax cuts) + rising spending (budget increases) + more borrowing (to cover the larger deficit) + higher interest rate expenses (more debt at higher rates) = $1 trillion deficits.

Over the next decade, the federal debt is already on track to rise from $21 trillion to $37 trillion.

But these numbers assume that nothing bad happens. And yet we know from experience that something bad always this way comes. More specifically, it will be almost impossible not to have a market crash/recession sometime over the next 10 years.

And then, all the calm and cooperative numbers lined up so carefully on the U.S. chart of anticipated accounts go into a pandemonium of panic and despair. The 5’s head for the exits. The 6’s collapse and cower in corners. The 7’s look for sharp objects or open windows.

And that’s when Mr. Trump (or whoever is in the White House at the time) might lean heavily on the Fed to come to the rescue.

But, as we have maintained for years, there will be no need. Already, the Fed is preparing to intervene… in the only way it knows how.

The Fed is now making Mistake #2: It is raising rates to try normalizing the financial markets. Inflation is running at 2.9%. Its current fed funds target rate is between 1.75% and 2%.

So it is still lending money at very un-normal, negative real rates. It claims it will make two more hikes this year to cut off the supply of EZ money and get ahead of inflation.

But already, it is preparing for its Mistake #3 – cutting rates in a panic when Mistake #2 causes stocks to fall.

Here’s a report from Bloomberg:

Officials in June signaled they plan to continue to raise rates at a gradual pace, penciling in two more quarter-point hikes for 2018. Powell’s emphasis that gradual increases are the right path “for now’’ may suggest the committee’s debate about pausing those hikes once the rate gets closer to a level they consider neutral – neither adding stimulus nor hurting growth – is likely to intensify.

Yes, Jerome Powell is only admitting what we already knew…

The Fed will never willingly revert to normal (market-discovered) interest rates. Instead, normalization will be forced upon it by a financial disaster – numbers that run amok.

U.S. stocks are more richly valued today than they were in 2007… before the onset of the financial crisis.

That’s the story of today’s chart, which maps the Shiller P/E Ratio by year from 2007 to today.

This ratio values the U.S. stock market by dividing the current S&P 500 price level by its average inflation-adjusted earnings per share over the past decade. The idea is that using a 10-year average “smooths” out some of the year-to-year volatility.

Using this ratio, we can gauge whether U.S. stocks are cheap or expensive relative to their earnings and price history. 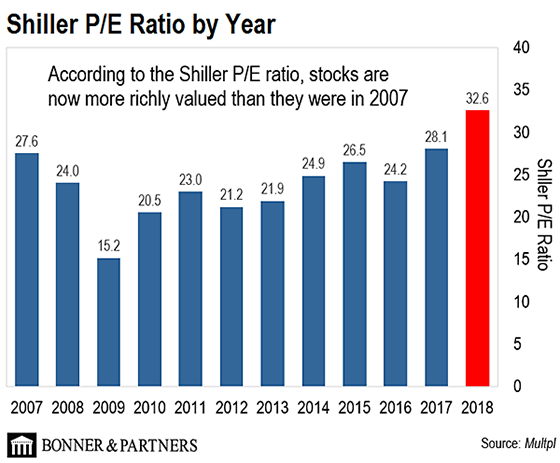 This doesn’t necessarily mean that stocks are overvalued at these levels. That which is expensive can always get more expensive. And of course, past performance doesn’t guarantee future results.

With U.S. stocks as richly valued as they’ve been in more than a decade, lower returns seem to be on the horizon.

The Trade War’s “Nuclear Option”
President Trump is threatening to escalate the trade war with China to new levels. POTUS says he’s “ready to go” with tariffs on $500 billion worth of Chinese goods – that’s roughly the value of all Chinese goods imported last year.

Where Is Your Car Really Made?
In today’s globalized world, supply chains from around the world come together to manufacture complex products like automobiles. In the midst of a trade war, global supply chains are most vulnerable to disruption.

Why Trump Blocked the Biggest Tech Merger in History
In March, President Trump blocked what would have been the largest tech merger in history. The official reasons are classified. But Jeff Brown, Bill’s top technology analyst, think he knows why POTUS took this unprecedented step…

In the mailbag, conversation turns to “Russian bogeymen“…

If Trump’s support for Russia over his own advisors was indeed a strike against the police state and a questioning of U.S. foreign policy, then I would be somewhat sympathetic. But that isn’t the case. Trump simply can’t admit to any influence that calls into question the validity of his election victory. Like everything else in his presidency, ego trumps all.

Could it be that officials in Washington come down on Russia because they have no intention of taking on the real culprit – China – since they are all on the dole, with China in control of their incomes, upscale homes, private schools, clubs, etc.?

Even if Russians did meddle in the U.S. election, could they have distorted it more than the campaign organizers themselves? Western “democratic” elections have been skewed away from the people and towards the power so much that politicians of all persuasions seem to hold politics as a way to secure a high income to the grave.

Trump may not be the smartest of U.S. presidents, but at least he does not – or does not know how to – speak the Polly lingo. The U.S. should definitely stop demonizing Russia as being what it was during the communist era… and as the U.S. president is testing the “waters,” follow him.

On the matter of Trump and Helsinki, my distaste and loathing of Trump transcends economics. The man is certainly an egotistical demagogue and dilettante, a grand prevaricator, racist, misogynist, serial sex offender, and perhaps worst of all, a true ignoramus. Indeed, Trump is just not very intelligent. And that insults all U.S. nationals. I doubt his claims of net worth because he’s fouled up virtually every business venture he’s touched.

I’ve worked in the former Soviet Union, and I love the place and people. Yet, even if Trump is correct about Russia, and they’ve done nothing (I doubt this is correct), it doesn’t negate all of Trump’s other negatives. The man is a menace to anyone with intelligence. I understand your focus in this newsletter is economics, but there’s more to life than money, and Trump is just an insult to anyone with the intelligence to see through his façade.

After Trump, it’ll take 50 years to fix America. The American dream has never been further from its reality. The American flag has never stood for less than it does when Trump wraps himself in it. America is only great when it takes the high road… The low road of Trump grates the greatness away. Whining, lying, crying, and finger-pointing – very presidential.

Trump can’t stand up to America’s enemies, so he confronts its friends. Trump, a coward draft-dodger as commander-in-chief, is an embarrassment in every way. Trump fulfils the desires of America’s enemies every day. Those authoritarian countries that seek to isolate America couldn’t do it before Trump.

Trump has been ignoring and breaking laws his whole life, while arrogantly hiding in plain sight. But once he took the oath of office, the veil is lifting; he’ll be caught in the spotlight he cherishes. The “Me-First, Me-Only” president will be the first to go – straight from the White House to the Big House.