But there’s an oasis in the hotel bar, where foreigners gather in the evening. Strangers in a strange land, they tell their stories.

One of them, brown from the sun and woozy from the alcohol, described the place where he had washed up…

“Yeah… it’s a kind of welfare state based on oil revenue. Only about 15% of the population are citizens. They treat the rest like dogs. Workers from Pakistan, Sri Lanka, and India built this place. They’re the ones who pour concrete in the 100-degree heat. But they can only stay as long as they have a job. Then, they’re kicked out.”

“We should do that in the U.S.,” said an American voice.

“But they treat citizens much better here. If you’re a citizen of Dubai, you’ve got it made. When you get married, they give you a house and $25,000 to help pay for the wedding expenses.”

Meanwhile, back in the USA, things get curiouser and curiouser…

Yesterday, the Dow popped up some 350 points. Why the big move?

Well, investors’ animal spirits were titillated by the thought of a trade deal with China. This is on top of the titillation brought last week by the Fed, which – in the wake of a deteriorating economy – seems ready to shift to Mistake #3 even before it has completed Mistake #2.

You’ll recall that Mistake #2 is raising interest rates to try to mitigate the damage done by Mistake #1 (leaving rates too low for too long). Mistake #3 is dropping them too sharply to try to undo the damage caused by Mistake #2.

Investors believe that central banks control stock prices – which, of course, they do… to a point.

But, King Cnut couldn’t stop the tides. And the Fed can’t stop the deep tides of economic fortune. The tide of hope and optimism that had begun with the Reagan Administration crested in 1999. It has been downhill ever since.

At least, that’s our hypothesis.

Since then, GDP growth rates have gone down; real incomes for real people – in America – have declined. And a large part of the public has shifted from looking forward to the future to looking backward to the good ol’ days. From a positive-sum, win-win world… it ebbed back to a zero-sum, win-lose world.

From Greed to Fear, that is.

Three times in the last century, the gauge went below 5. Our guess is that it would have reached its rendezvous with destiny again – below 5 ounces of gold to the Dow – in 2009, had the Fed not intervened.

But the Fed panicked. It then disguised, delayed, and denied the truth of this tidal shift by falsifying the most important price signal in capitalism – the price of capital itself.

The downward trend is not limited to the U.S. Europe, Japan, and China all show the same symptoms. And this week, the president of the European Central Bank (ECB), Mario Draghi, announced that it would keep making mistakes… even bigger ones.

Unlike the U.S., the ECB seems to have skipped Mistake #2 altogether. Its key lending rate never got above zero. Nevertheless, Draghi says he’s ready to take it even further into negative territory. This from Bloomberg:

ECB President Mario Draghi appeared to set a low bar for action on Tuesday when he said additional stimulus will be needed “in the absence of any improvement” to the outlook for growth and inflation. He specifically cited rate reductions as an option, sending the euro lower and prompting money markets to price in a 10 basis-point cut by December. […]

“Draghi is going to finish his tenure with a cut,” said Claus Vistesen, chief euro-zone economist at Pantheon Macroeconomics. “The door is now open and I don’t see how they can not walk through it.”

Investors bought European stocks. But what was more curious about this was the reaction of the U.S. president on Twitter:

Mario Draghi just announced more stimulus could come, which immediately dropped the Euro against the Dollar, making it unfairly easier for them to compete against the USA. They have been getting away with this for years, along with China and others.

European markets rose on comments (unfair to U.S.) made today by Mario D!

This is, of course, the same man who rants against Jay Powell for not manipulating the U.S. dollar lower. He recently complained that U.S. stock prices would be “10,000 points higher” if the Fed had followed his advice.

He now comes forward with a complaint against Mario Draghi. For what? For using monetary policy to manipulate the euro lower!

The press, Congress, the White House, investors, economists, the Fed – all seem to think the same poppycock… that central banks are responsible for stock prices and the economy.

But can you really make your economy stronger by faking your interest rates and cheapening your currency?

Look for more in tomorrow’s Diary…

Will Trump Shake up the Fed?
President Trump and the Federal Reserve have clashed before… but the fight may soon get much worse. Reports say Trump has a plan for removing Jerome Powell as chair of the Fed. But the Fed has its own plan if tensions escalate…

Facebook’s New Crypto Gets a Cold Reception
Yesterday, Facebook revealed Libra, a digital currency like bitcoin. It plans to launch it next year, with backing from firms such as Visa, PayPal, and Uber. But not everyone’s excited about Facebook entering the crypto space. Many lawmakers think Facebook already has too much power in the tech world. And now, they say Facebook is targeting the world of finance…

The Man Who Bet $100,000 on Bill’s Trade of a Lifetime
Recently, Bill shared his Dow-to-Gold trading model with his long-time friend and colleague Tom Dyson. Tom was so convinced by the model, he went “all in” on the trade. And he believes it could be the secret to securing intergenerational wealth…

In the mailbag, another dear reader shares their enjoyment of Bill’s breakdown of presidential candidate Elizabeth Warren in a recent Diary…

Just finished “How Elizabeth Warren Out-Trumps Trump.” In my honest opinion, one of Bill’s finest summary commentaries. I, too, know I can’t change any of what he is reminding us about (laugh, cry, whatever!), but I really do appreciate the regular, highly readable, even entertaining reminders of how things actually are. Bill is the master of “The Emperor Has No Clothes.” Keep it up, and thank you!

Meanwhile, more praise rolls in for Tom Dyson’s recent “postcard from the fringe,” with a special request from a reader…

So glad that Tom Dyson will be writing articles for Bonner. If you can talk him into it, have him start writing a similar monthly newsletter. I’d subscribe to that in a heartbeat.

Palm Beach Research Group editor and guru, Teeka Tiwari, has waited 30 years to reveal his most powerful wealth-building secret… and no, it’s not cryptos.

If you want to see how these small investments Teeka uses can pay off big, secure your spot for this “Pocket Change Millionaire Summit.” 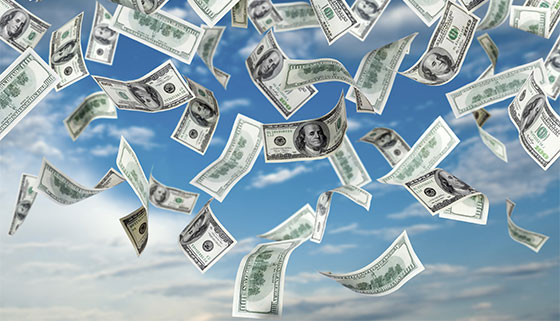