YOUGHAL, IRELAND – A wonderfully fraudulent confrontation is setting up…

On one side is Donald J. Trump, pretending that he has “already made America great again” and blaming the Fed for ruining his beautiful work. He wants the Fed to lower interest rates, not raise them.

On the other is the Fed, pretending that it is the architect and creator of such an amazing economy, and that it’s now guiding it to perfection. It believes it is “normalizing” the economy by gradually raising rates.

Oh, Dear Reader… You guessed it, didn’t you? They’re both wrong.

First, because the U.S. economy is not “beautiful”… It’s a nasty, dishonest, and dangerous mess.

Second, because both Trump and the Fed are to blame for making it that way.

Third, because there’s no need for The Donald to get on the Fed’s case anyway. They’re both on the same team – actively manipulating the economy for their own benefit and making an even bigger mess of things.

If the two could be brought before an honest judge and properly charged with some combination of chicanery, fraud, and negligence, both would do time… with the Fed getting the heavier sentence.

America’s central bank has been conniving to falsify the markets – and shift wealth to the financial elite – for the last three decades.

Mr. Trump had it right when he was running for office. The Fed, he charged, had created a “big, fat, ugly bubble.” Once in office, he should’ve replaced Janet Yellen immediately with an honest, Paul Volcker-type banker.

Instead, he left the miscreants in place and took credit for the bubble.

Then, as the stock market went up and unemployment went down, he doubled his bets… calling it “his” economy, and saying that he had “already made America great again” with his tax cut, spending increases, and other initiatives.

Of course, the tax cut and spending increases did flatter The Donald’s numbers (“his” numbers).

You can almost always get a little boost by spending money you don’t have. But unless you’re investing in something that will make a profit, you’re just wasting time and money… and making the situation worse.

We got a report last week that half of the extra growth in the Trump years (so far) has come from more government spending – mostly military spending.

Needless to say, there’s no way this is going to pay off. America could defend itself with a fraction of what it now spends on “defense.” Extra money to the Pentagon is just throwing money down a brass rathole.

Another temporary boost seems to have come as an unintended consequence from Mr. Trump’s trade war, as our head of research, Joe Withrow, reported on Saturday.

In anticipation of more tariffs, importers moved orders forward to avoid the additional taxes. This caused a bigger trade deficit with China, but it increased spending… for a while.

Next year, we should see the opposite effect, as orders fall off and inventories decline.

And tax cuts, without offsetting spending cuts, merely shift the burden of government waste to the credit market and future taxpayers.

Without the support of the Fed (which has stopped buying government debt), the government will have to source the credit from the private marketplace, which will push up interest rates.

That’s part of the reason mortgage rates are already over 5%. By our calculation, households lose as much (from higher rates) as they gain from lower taxes.

Auto and home sales have sputtered in recent months despite high consumer confidence and low unemployment.

The slowdowns have been driven at least in part by the Federal Reserve’s efforts to wean the economy off near-zero rates. Higher borrowing costs are squeezing the auto and real estate industries that benefited from a decade of cheap money.

“It’s very clear that higher interest rates are having an effect on the economy,” said Nicholas Colas, co-founder of DataTrek Research. “The two most expensive purchases a consumer makes are a house and a car. Both are credit-sensitive.”

Now that the economy has recovered from the Great Recession, the Fed is trying to take the training wheels off. That delicate task is even trickier now because of how low rates got – and how long they stayed there.

The auto and real estate industries are at the frontlines of this shift in borrowing costs. Mortgage rates recently topped 5% for the first time since 2011. Even though mortgage rates are still low historically, homebuyers are taking notice.

New home sales tumbled 5.5% in September to the lowest level in nearly two years, the Commerce Department said last week. Sales plunged nearly 41% in the Northeast and dropped 12% in the West, though they rose modestly in the Midwest. New home sales are now 22% below their recent peak in November 2017, according to Barclays.

All of these things – not to mention the largely fraudulent employment numbers – point to a recession coming soon to a neighborhood near you.

Then, Mr. Trump will attack the Fed with even more vigor, claiming that it destroyed his beautiful economy.

He needn’t bother. He has nothing to fear from the Fed.

As we’ve maintained in this space, the Fed was never going to “normalize’”… not with $250 trillion of debt worldwide dependent on abnormally low rates.

At the first sign of crisis, the Fed is sure to panic, with or without encouragement from the president.

And the panic is bound to lead to the worst possible response on the parts of both key players.

The Fed will cut rates to negative levels. It will buy stocks as well as bonds. And like Japan’s central bank, it will become the banker of first and last resort for the federal government.

Yes, the Trump Team will go all-in for more government spending – infrastructure… “defense”… tax credits… you name it! And it will all be funded with funny money from the Fed.

Both on the same team…

…working together to bankrupt the nation.

MARKET INSIGHT: VOLATILITY IS BACK

October has brought with it an explosion of volatility…

In today’s chart, we check back in on the CBOE Volatility Index, or VIX. Known as Wall Street’s “fear gauge,” the VIX tracks investors’ expectations of how dramatic the S&P 500’s price swings will be over the next 30 days. 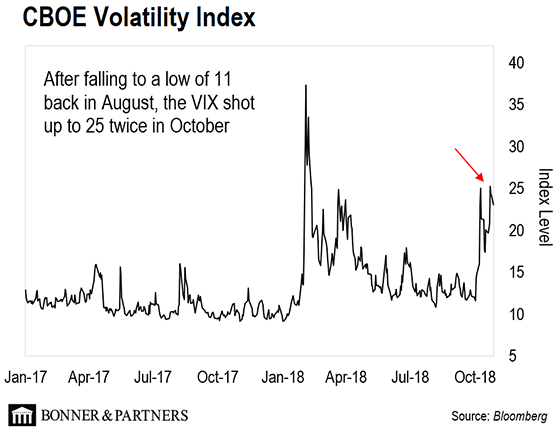 But October has brought volatility expectations back to life. The VIX has already hit 25 twice this month as the S&P 500 has fallen 9%.

This matches up with the latest cautionary reading from Bill’s Doom Index… While the Doom Index has not yet raised the “crash alert flag,” it’s at a level that suggests more volatility is ahead.

Never Send a Hawk to Do a Dove’s Job
As Bill wrote above, the president is not pleased with the pace of interest rate hikes from Fed chair Jerome Powell. But if POTUS wanted low rates, he could’ve done a very simple thing: Let Janet Yellen keep her job.

An Update from the Doom Index
The Q3 data is in… So what is the Doom Index saying about America’s finances? Bonner & Partners’ head of research Joe Withrow gives us an update.

Paul Volcker: The Last Honest Central Banker?
Reagan-era Fed chair Paul Volcker might be one of the few honest central bankers in history, as Bill has written before. And Volcker now has a new memoir out. Here’s what “Tall Paul” says is needed to rescue America’s monetary future…

In the mailbag, dear readers find targets for their ire: President Trump and Bill himself…

I know that “we, the people” have elected a man who has serious mental problems. Another problem is that the other 50% that voted him in are very much uninformed. This president is unable to govern in a minimum way that the people expect him to. We’re in a bad way in this country today. The president is responsible for all the negative actions taking place in this country and for some around the world, too.

The day low interest rates become illegal to use, you can start sending me your newsletter again. In the meantime, since you feel that Trump committed a crime by using them, I can’t believe a word you say. That idea is dumb, in my opinion, not just dishonest.

“The Donald,” as you disrespectfully call him, is the president of our country. I am not his fan, but I totally respect our beautiful country, and so should you.

Hello, Mr. Bonner. I enjoy scanning through your emails when I have time, and I tend to have a lot of same or similar viewpoints with you; however, could you please show respect for our president by referring to him as President Trump or President Donald J. Trump, instead of Trump, Mr. Trump, or just Donald J. Trump, etc. By addressing our president as you do, it tends to be politically biased and disrespectful for the office.

I am open-minded and like to hear any party’s viewpoints or opinions so I may decide whether what’s written or spoken is politically biased or motivated or is truly unbiased, educated, and researched statements. As we know, certain media outlets are extremely biased and agenda-motivated, and it’s hard to find any nowadays that aren’t.

Well, enough political comments from me. Reminds me, I need to go vote today.

Don’t let the market volatility shake you out of this opportunity.

Jeff Brown, Bill’s top technology expert, says we are just at the beginning at one of the biggest technological breakthroughs of this millenium.

It will be the biggest investing opportunity of the next 10 years. Find all the details here… 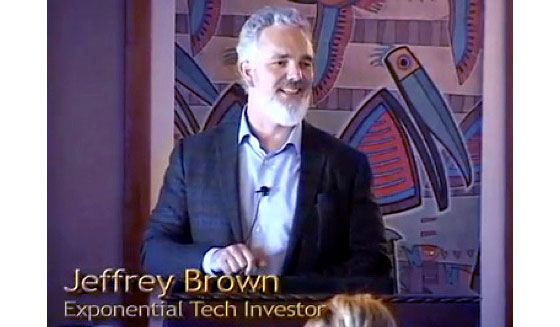