The Trump team came into office with what might have been a historic opportunity to drain the Swamp and take the feds down a peg. Mr. Trump even said he would eliminate the national debt in eight years.

Instead, he teamed up with Democrats to crash through the debt ceiling, gave the big spenders at the Pentagon even more money, cut taxes, and made the Swamp even deeper.

Predictably, tax revenues declined and the deficit rose. And the national debt went up by more than $1 trillion over the last 12 months.

From The New York Times:

That overall drop looks worse when you consider inflation. A dollar today buys about 2 percent less than it did a year ago, according to the inflation index used by the Federal Reserve to set monetary policy. So the government brought in slightly less money year over year, and that money was worth less than the equivalent amount a year ago…

Get Rid of the Fat

And now… what to do? Reuters is on the story:

U.S. President Donald Trump, faced with a budget deficit at a six-year high, on Wednesday told his Cabinet to come up with proposals to cut spending by their agencies by 5 percent, but he suggested the military would be largely spared.

“I’d like you all to come back with a 5 percent cut,” Trump told his Cabinet secretaries at a meeting attended by reporters.

“If you do more than that, we will be very happy. There are some people sitting at the table… that can really do substantially more,” he said.

Senate Majority Leader Mitch McConnell is on the case, too.

“It’s disappointing, but it’s not a Republican problem,” McConnell said of the deficit, which grew 17 percent to $779 billion in fiscal year 2018. McConnell explained to Bloomberg that “it’s a bipartisan problem…”

Here at the Diary, we look at the passing parade in Washington through a cynical lens…

No situation is so hopeless… so absurd… or so disastrous that the feds can’t make it worse. No policy is too stupid… too counterproductive… or too corrupt that it can’t become the law of the land.

And no man is too craven… too degenerate… or too much of an imbecile to be disqualified from public office.

Each side feigns a sincere and everlasting commitment to serving the public. And neither wishes to disappoint its own contributors, supporters, voters, and cronies.

This leaves the two parties with more in common than in contrast. That is to say that, as former governor of Alabama George Wallace once put it, there’s hardly a dime’s worth of difference between them.

Each looks out for the interests of the governing insiders – the public be damned. The differences are merely cultural and aesthetic.

We are aware that this runs deeply counter to the reigning political fantasy.

As for the opposition, it’s as evil as Attila and as dumb as dirt.

This “us versus them” approach to politics serves both parties well. It keeps the voters entertained, engaged, and distracted.

The fans are so busy rooting for their favorite team, they don’t notice that both teams are actually on the same side; they are part of the elite… the beneficiaries of the Deep State policies.

Every society needs an elite… and gets one, whether it wants it or not.

Some people are naturally stronger, more ambitious, or more cunning than others. No matter what you call these insiders, they take over…

As the great Italian economist Vilfredo Pareto put it, the “foxes” always figure out how to use the government for their own benefit.

The average person has neither the time nor the skill to dissect the federal budget, for example. He relies on his elite – like accountants with the Congressional Budget Office or experts on the White House economic council… and members of Congress and functionaries in the administration – to work through the numbers and make sure they make sense for the nation.

This works passably well when governments are smallish and newish. Early in the cycle, the elite helps to keep the show on the road. Later, it drives it into a ditch.

Over time, the system degenerates and the elite becomes parasitic. Then, the foxes’ interests are no longer aligned with those of the common man.

Instead, the elite looks for ways to deceive – not serve – the public… and to use federal finances for its own purposes, essentially looting the Main Street economy in order to reward itself.

The voters don’t have any way of knowing or understanding what is really going on. But they sense that something is wrong.

For many years, Republicans and Democrats have fought over the middle ground… trying to capture the marginal voter in the center.

But now, the middle is where the toxic problem is… in the Swamp… full of slithery, slimy, self-interested hustlers… chockablock with fantasies and distractions.

Trump played the role brilliantly, promising something new with such gusto and novel forthrightness that much of the public believed him… and still do.

So far, none of his deals and deal-making have made much sense to us. But if he could lop 5% off the federal budget, it would definitely be a welcome and unexpected achievement.

Our prediction: The sun will rise tomorrow at the accustomed time. The deficit will widen. And spending will go up, not down.

And the debt will continue to increase.

U.S. imports from China exploded to record highs during the third quarter…

That’s the story of today’s chart, which tracks U.S. imports from China over the past four years. 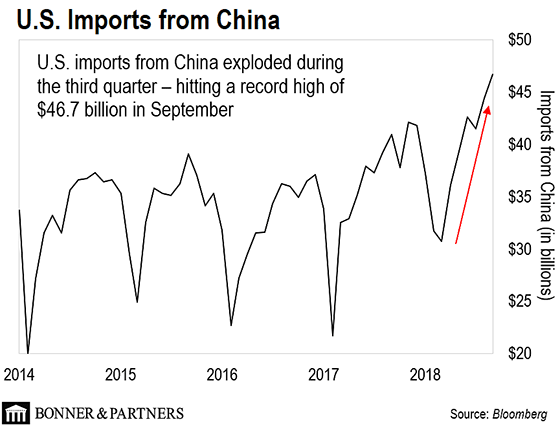 As you can see, U.S. imports from China exploded higher over the summer, hitting a record high of $46.7 billion in September.

In August, the Port of Oakland in California reported a record import volume, mostly from China. The port recorded a 9.2% surge in volume – the busiest August in the port’s 91-year history.

And national data suggests that the Port of Oakland’s record volume was not a one-off occurrence. Similar spikes occurred in other major ports across the United States.

What accounts for this spike in U.S. imports?

This suggests that U.S. companies were front-loading orders to beat the new round of tariffs.

This conclusion was confirmed by Bloomberg Intelligence analyst Rahul Kapoor, who said, “We have a rush game with the tariff.” Kapoor also noted that cargo was being left behind at Chinese docks because America-bound ships were so full.

What’s more, there were several reports of U.S. companies paying extra in freight charges to expedite orders, in hopes of beating the looming trade wars.

Bill has long written that it is free trade – not economic nationalism – that creates wealth. With American companies bending over backwards to beat the looming tariffs, it begs the question: Who is the winner here?

Is This the Next Sears?
Sears, once a titan of American retail, has filed for bankruptcy. But Sears might be just the beginning. In the age of e-commerce, other legacy retailers are under threat.

The Next FAANGs
The FAANGs (Facebook, Apple, Amazon, Netflix, and Google) are five of the most dominant stocks in the market today. But the market is always changing – and these could be the next FAANGs…

How Legal Pot Comes to America
With cannabis now legal in Canada, Nick Giambruno, Casey Research’s cannabis investing expert, believes it’s just a matter of time before the “green revolution” comes to America. Here’s what could make that happen…

In the mailbag, Bill’s response to The New York Times keeps readers talking…

Great article, Bill, with lots of innate wisdom based on actual accumulated human experience – the same basis that Adam Smith wrote about in his moral philosophy tome, The Wealth of Nations.

I have the highest respect for you, but forgive me if I say that today’s message was not your finest. It’s easy to find fault in news coverage anywhere, not only in The New York Times, but also in The Economist, BBC, Reuters, and elsewhere. They all disappoint in one way or another. Your deeper and more thoughtful insights are of greater value to your readers.

What a terrific article loaded with common sense, logic, and the simple ability to question the do-gooders and know-it-alls. Thank you for speaking common sense!

Bill, I really wish you would make your columns available for syndication. Not only are they generally spot-on with the truth, but I also find many of them hilarious. Mike Royko would be proud, even if he wouldn’t agree with much of what you say.

I bet you’re going to get an earful from your dear readers on this one. I can already hear the backlash from the women who think Ms. Piazza is right. And probably none of them will even hear, “that couples that share household chores equally rather than specializing are more likely to get divorced.” If they do, they’ll surely explain it away by blaming the men for not doing it right.

Men have been taught that even looking at another woman is bad. I’ve seen so many men squashed by their wives. They’re not getting any anymore. I pity them. And then, there’s the “my wife won’t let me (fill in the blank)” concept. We don’t hold that power over the other in our relationship – in either direction. Suggestions are okay, but neither of us should have the right of control over the other. She’s a woman, and I’m a man. We each do things the other would never want to do. We specialize in our family, and have been married for 38 years.

As you read this, Jeff Brown, Bill’s top technology expert is giving a presentation at the Legacy Investment Summit in Bermuda on “one of the best tech investing opportunities of a generation.”

To get a preview of what Jeff is sharing, go here. 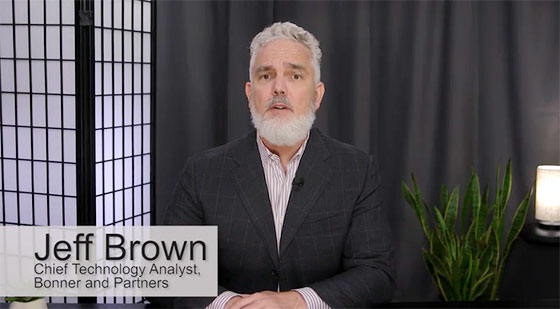