People are relaxed and direct. They tell you things… even without you asking.

For example, there seems to be a curse on the property next door.

“The previous owners were such lovely people. She was from a rich family. And he… I don’t know where he came from. Everybody in the area liked them.

“Not like the guy who owns the place now. He fancies himself a ladies’ man… and he’s a slow payer. He must have millions, but he won’t pay until you ask several times. Nobody likes him.

“The previous owners… oh, they were devoted to each other. But they weren’t young. And when she got cancer… I think it must have been terminal… and they knew it.

“So they went up to a lake. And they said goodbye to each other. They were about to jump into the lake together when a school bus came by. I guess they didn’t want to set a bad example for the school children. So they came back home. And she died there. And he died of a broken heart a few months later.”

Declan tells us the saddest stories with a broad smile on his face, as if he draws some amusement from the suffering of others… like a man who laughs heartily when he hears his brother-in-law has been fired.

We learned from our lawyer that our new house is on the “Preservation List.”

“What does that mean?” we asked, innocently.

“Ah… it’s a disaster. They go around, and for no apparent reason, they put your house on the list of historic houses. That’s what they did to me. Then, you canny drive a nail without asking permission. When I have to do something… I do it at night… or during the holidays.”

This news came as a bit of a shock. Because we intend to drive lots of nails. But the architect disputed it.

“Noooo, it’s not that bad. You just need planning permission. It won’t be a problem. But it will take three months. Unless you want to put some American-style deck onto the house. Then, you’ll never get permission.”

It looks to us as if the markets are planning to knock down the entire capital structure – without planning permission.

The financial modifications now underway in Washington are more serious than most people realize. We seem to have gone from a 30-year era of EZ money to an era of Not-So-EZ money.

After adding $4 trillion in QE “liquidity” over the last nine years, the feds are set to withdraw $3 trillion (according to economist Richard Duncan) over the next three years. And instead of lowering interest rates, the Fed is raising them.

If this is true, every financial projection, calculation, and wishful guess needs to be reconsidered.

As long as the Fed was providing financing, people could borrow as much as they wanted…

…without forcing up interest rates…

…and without keeping people from borrowing so much money that they were almost certain to blow themselves up.

Here are the latest figures from the New York Fed:

But now, the world’s total debt level – about $233 trillion – is higher than ever.

Stock market valuations, too, according to a new calculation by investment manager John Hussman, are higher than ever.

And as much as $7 trillion in government bonds still trades at negative yields.

All those numbers – and the millions of private plans that depend on them – are about to be corrected.

The Fed is no longer providing unlimited funds; it’s extracting them. And this changes everything.

We predicted that the Fed would never follow through on its plan to “normalize” interest rates.

We still believe it.

When the going gets tough, the new Fed chairman, Jerome Powell, and his fellow central bankers, will all turn tail and run.

They will show the same “courage to act” as Greenspan, Bernanke, and Yellen.

That said, we also see that the Fed was remarkably blind to the problems it was causing by leaving interest rates too low for too long.

Most likely, its vision hasn’t improved; it will repeat the error in the other direction, continuing to put away the booze even as the revelers begin to show signs of delirium tremens.

Gold has been staging a comeback…

Today’s chart looks at the gold price over the past 12 months. 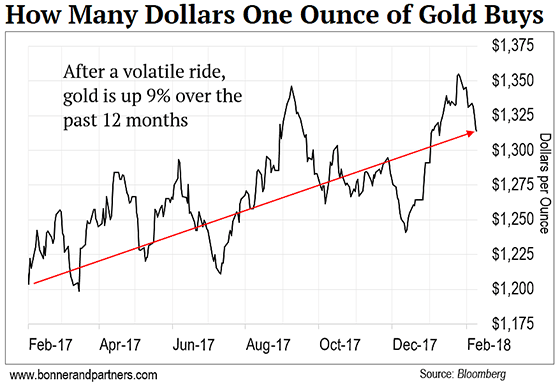 As you can see, gold is up 9% since this time last year.

But it’s been a volatile ride.

Over that time, there have been five drawdowns – or peak-to-trough price falls – of at least 4%.

The Five Biggest Losers From the Budget Deal
As Bill reported yesterday, the federal government now has a new two-year budget deal. It’s still too early to know precisely who will benefit from the deal. But the losers are easy to identify…

Today’s Crypto Crash Is Temporary
Crypto investors are nervous. Bitcoin, the world’s first cryptocurrency, is down more than 50% from its December high. But Jeff Brown believes that this crypto crash is temporary. Here’s why.

In the mailbag, a few punches from readers…

I think I understand what your problem is: You don’t have high intellectual standards. What you are contemplating is not a “spirit of mischief” but, really, a spirit of non-existence or a spirit of ignorance. Take your pick. Why? Well, because if you are saying “they made fake money cheap for too long,” that is inherently a criticism. By suggesting what they are doing wrong, you are obviously pointing to a “solution” also.

I think, at this point, you are very deceptive and cunning. Or you can plead a deep state of ignorance. Much of what you are trying to turn “over and over” (like a dreidel in your head?) is the result of a deep state of a lack of real education, real foresight, real intelligence, and real character.

I apologize readily if I am harsh; that’s not my intent. Yet this is not a “diary.” It’s a strange attempt at personal disclosures about one’s deep state of limitations. You are readily participating – to a readily identifiable degree (though perhaps not known quantifiably) – in the very fight that you attempt to decry or are “criticizing.”

Don’t you ever get tired of constantly being wrong?

But Bill still has his fair share of supporters…

You inevitably stir up a hornet’s nest when you poke patriotism in its already blind eye. Don’t let the negative comments discourage you. Truth can be a bitter pill, but it’s the only cure.

You seem to be getting a bum rap in your feedback lately. The complainers attack on all sides – from people looking for actionable advice to those incensed that you don’t validate their choice of scoundrel in politics. And they always present knocks on your rambling style (admittedly, they might have a small point; Elizabeth is much more concise).

But so what? It’s your Diary. The main problem of the complainers appears to be that they don’t know the meaning of the word “diary.” Never mind “free.”

Here’s some concise and actionable advice you can include in your Diary: “If you don’t want to know what someone is thinking, don’t read their diary.” There are some of us who enjoy reading your incredible insights on various topics along with your totally unrelated stories about abandoned houses and windswept desert cattle drives. Please keep rambling on.

“This could cure thousands of diseases permanently…”

That’s what Jeff Brown, Bill’s top technology analyst, told us recently. A revolutionary piece of tech is primed to completely rewrite medicine. And Jeff’s identified the three small-cap stocks that will skyrocket when it does. Details here. 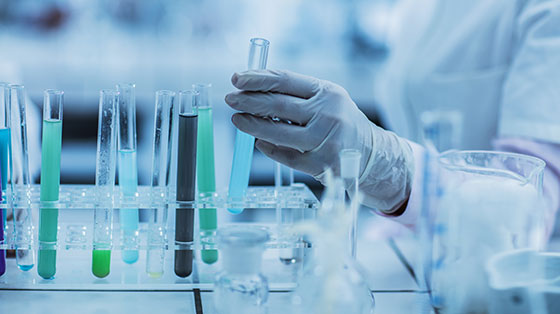